Your new Bible of the Silver Age — and the Swingin’ Sixties.

I’ve noted many times that TwoMorrows’ Back Issue is my favorite comics magazine, that it shares a lot of the same DNA as this website.

Back Issue is primarily a paean to the Bronze Age but now the mag’s editor Michael Eury is turning the clock back even further with Hero-A-Go-Go! — a colorful book that delves into the coolest and kitschiest that the ’60s had to offer (much like last year’s ’70s-’80s celebration Comic Book Fever, by George Khoury, both also from TwoMorrows.)

This is exactly the kind of book that makes my heart beat like a big bass drum — and I’m proud to say we’ll be serializing it weekly for 13 weeks, starting here. (The book’s pubdate is 4/19.)

— The Secret Origin of the TEEN TITANS. Click here.

— A Q&A With Bill Mumy of LOST IN SPACE. Click here.

— A Salute to THE MAN FROM UNCLE. Click here.

— The Hidden History of THE MONKEES in Comics. Click here.

— Your Guide to MARVEL’s Cartoons of the ’60s. Click here.

— JAMES BOND’s Bizarre Influence on Marvel and DC in the ’60s. Click here.

— An INSIDE LOOK at THE BEATLES’ Comic Book Debut. Click here.

In the meantime, check out Michael’s introduction to the book below — about how a little superhero show you might have heard of changed his life. Plus, enjoy some pages from the book itself so you can get an idea of what’s in store for you.

Oh, and you can pre-order it here. — Dan 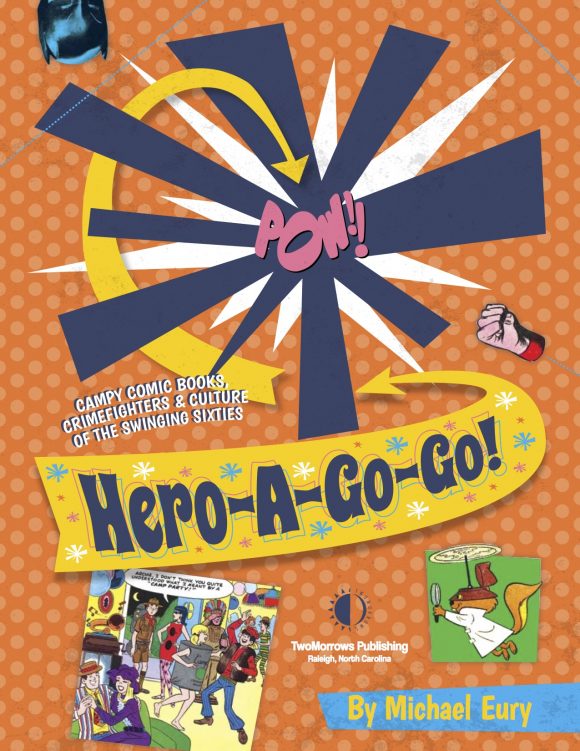 From the interior of Hero-A-Go-Go!

GOIN’ TO A GO-GO: How Real-World Crises Drove America Mod

“What a terrible way to go-go.”

When actor Adam West first uttered those words I was introduced to Camp humor, although at the naïve age of eight I didn’t get the joke.

It was Thursday evening, January 13, 1966, and my parents and I had watched the conclusion of the premiere two-parter of ABC-TV’s Batman (Part One had aired the previous night). The Riddler’s gun moll, Molly (!), played to perfection by the buxom and curvaceous Jill St. John, had infiltrated the secret Batcave by flawlessly disguising herself as Robin, the Boy (!!) Wonder, and once her ruse was exposed she tumbled to her death into the cave’s Atomic Pile nuclear reactor. What a terrible way to go-go, indeed.

My parents howled. And I scowled, thinking them nuts for finding humor in such a tragic event. 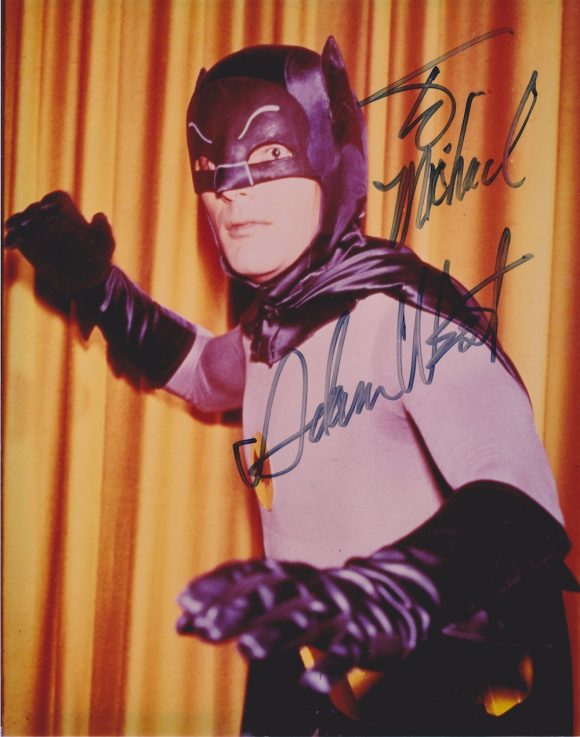 But Mom and Dad were savvy enough to get what the third-grade me was missing: that Batman was riddled with puns and exaggerated scenarios that were outrageous, but played straight, with tongue planted so firmly in cheek that it probably induced mouth ulcers. With Batman, the daft became deft thanks to the typewriter of madcap screenwriter Lorenzo Semple, Jr., who, at the behest of executive producer William Dozier, nimbly straddled the line between crafting an adventure show for kids and a farce for adults.

Batman was an instant cultural phenomenon. Relative unknowns became stars, millions of dollars were made, and imitators popped out of nowhere. Batman so deeply affected children that many of them were inspired to become comic-book professionals, animators, or lifelong toy and comic collectors.

But since TV’s Batman strayed from the Darknight Detective’s original “creature of the night” interpretation, there were many who argued that the show truly was a terrible way to go-go. Dozier’s Batman has been blamed for sullying the character, ruining the comic-book industry, and programming lazy journalists to preface any article about comics culture with POW!s and ZOWIE!s. The “blame Batman” game even permeated DC Comics, Batman’s publisher, which for decades almost disavowed the very television show that had, in 1966, defibrillated its comic book sales. 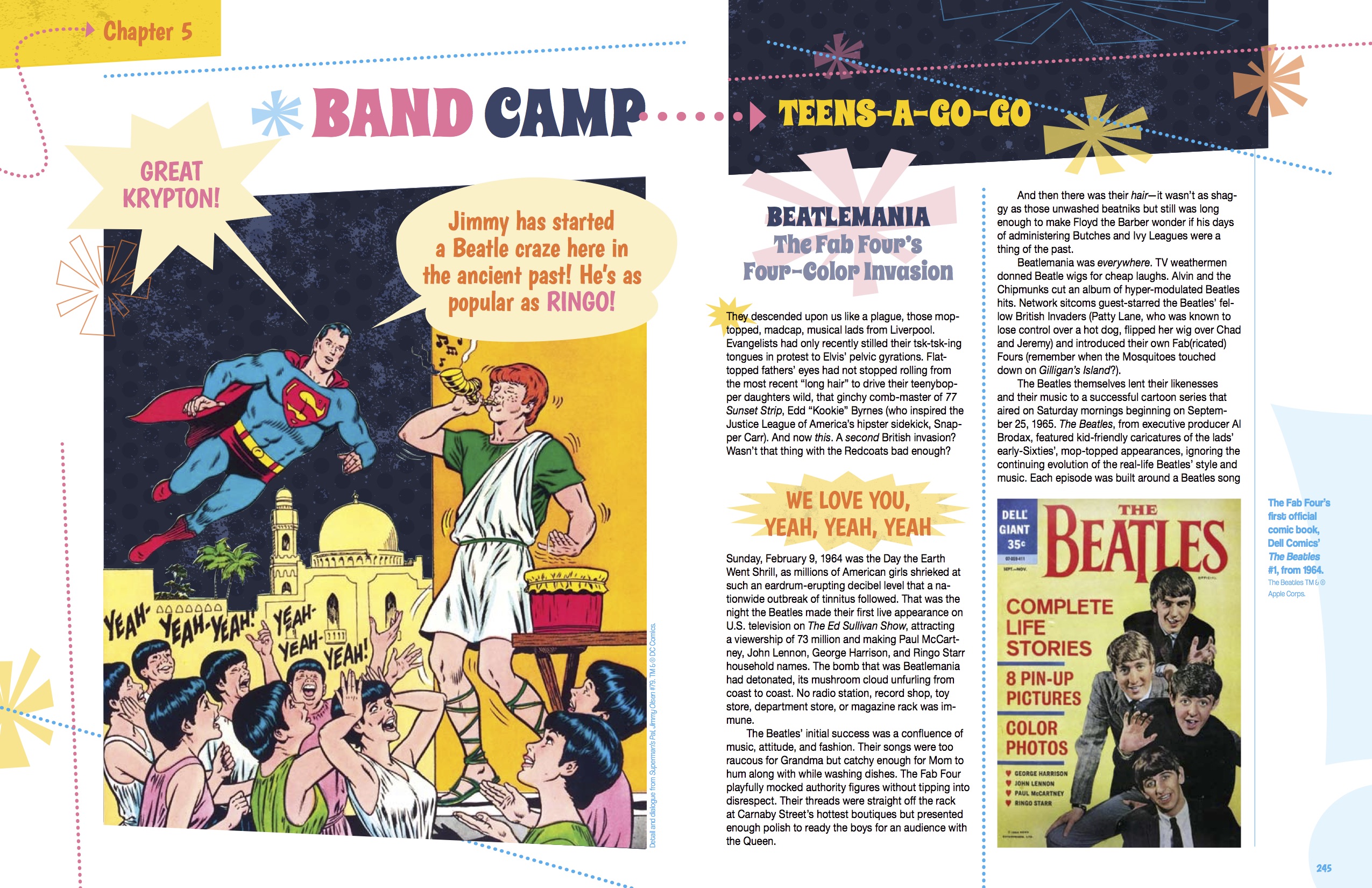 Yet Batman did not create the so-called “Camp” culture of the Sixties. Camp was well in vogue by the time Adam West and Burt Ward first slipped into tights as TV’s Dynamic Duo. Two years before Batman, writer/activist Susan Sontag very famously addressed the flourishing Camp movement by penning her essay Notes on ‘Camp’, where she wrote, “Camp is art that proposes itself seriously, but cannot be taken altogether seriously because it is ‘too much’.” Camp had been going on for generations, from burlesque shows to screwball comedies, but the Sixties claimed it as the art form for the decade. It was a time when kitschy paintings of Campbell’s Soup cans and big-eyed waifs adorned galleries. When the mod fashions of Carnaby Street invaded Main Street. When it seemed like almost everyone was goin’ to a go-go. 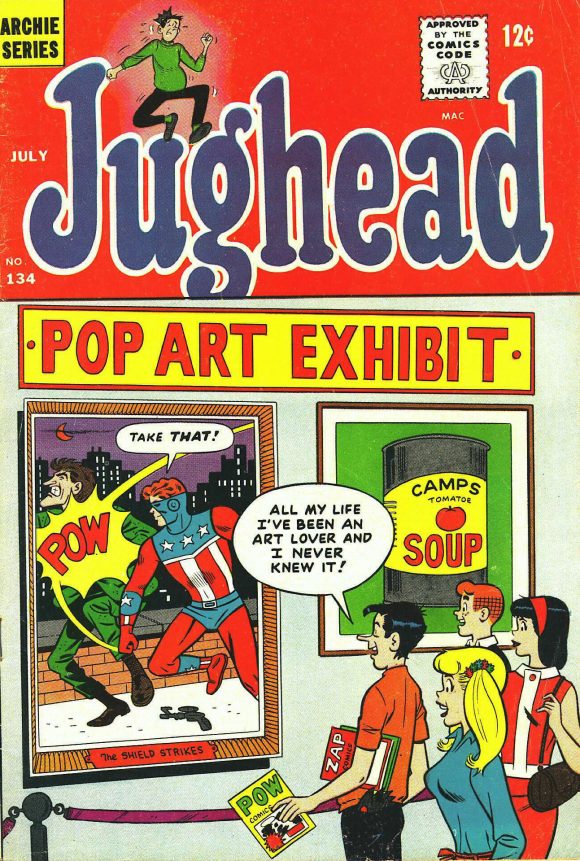 TV’s Batman also cannot be blamed for the camping-up of comic books—many comics were quite campy before Bill Dozier and Lorenzo Semple came along, thank you very much. A year before Batman hit the airwaves, you could find the Caped Crusader hoisting a suicide-bombing gorilla (The Living Beast-Bomb) over his head, à la Atlas. Such unconventional frolics weren’t the sole domain of Batman. Around the same time, DC Comics published preposterous stories featuring children tossing a weakling Superman around like a beanbag, Lois Lane being wooed by a grotesque interdimensional monster, Jimmy Olsen making Superman beg for mercy in a wrestling ring, the Flash being outraced by a tricycle-peddling Trickster, Wonder Girl battling a creature that looked as if it were made of pancake batter, and a man on trial before an insect jury. Elsewhere on the comics racks, Blue Beetle was battling the ridiculous Praying Mantis-Man, freckle-faced high-schooler Archie Andrews was a jungle hero rescuing Betty Cooper from a hungry lion, and teeny-bopper Ponytail was Twisting with the Frankenstein Monster.

No, Batman did not create the Camp movement of the Sixties. Yet Batman was its zenith, its very poster child. And from my perspective, it was a wonderful way to go-go. 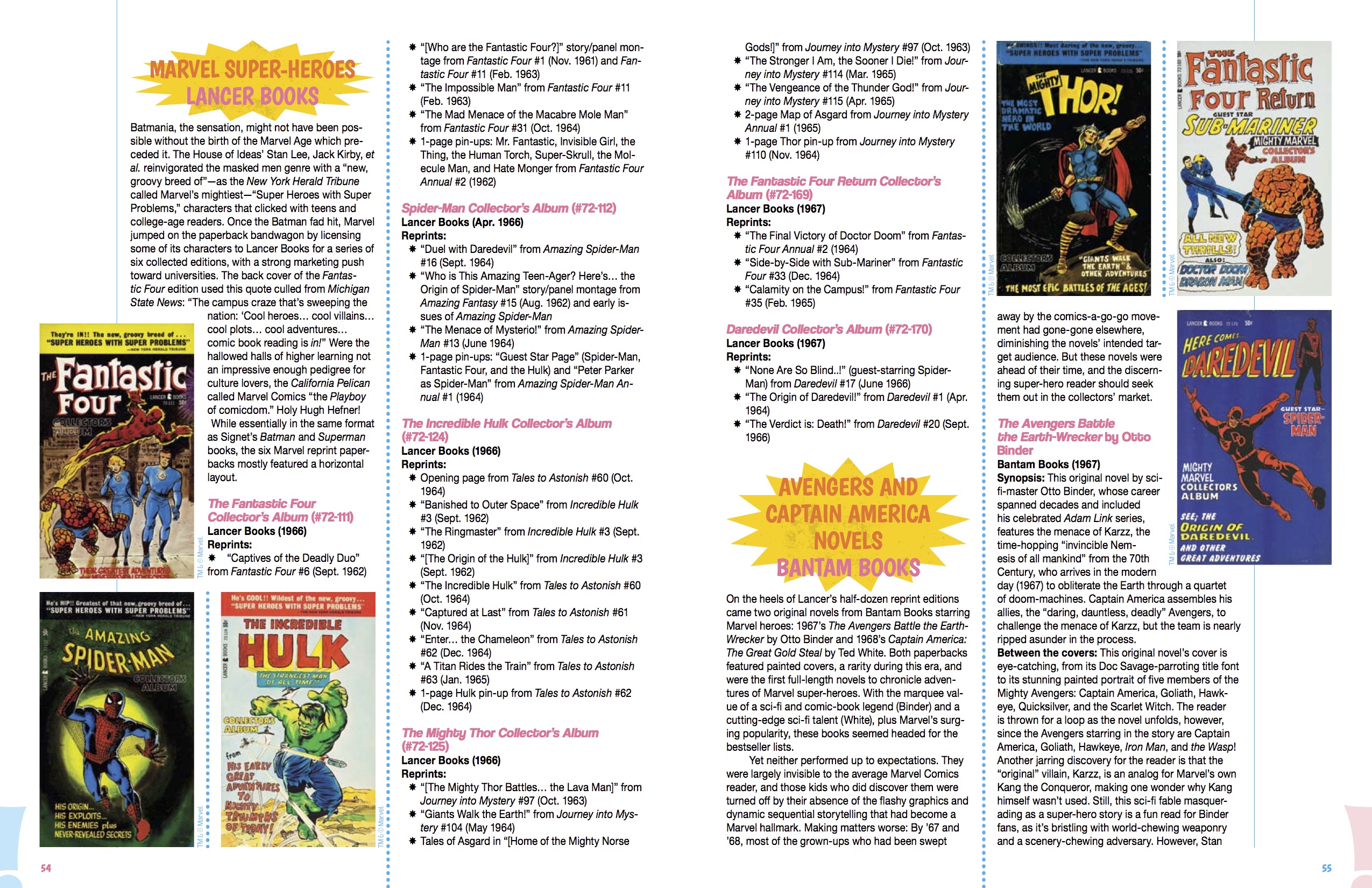 The Sixties were a tumultuous time. The Cold War’s icy fingers teetered over a nuclear button, and paranoid Americans nervously looked over their shoulders fearing the worst, teaching their children to Duck and Cover while plastering municipal buildings with Fallout Shelter signs. The U.S. president was assassinated—before an audience—and the same fate befell his alleged murderer. African-Americans were brutalized for peacefully resisting a culture of oppression and inequality, and communities were in flames during violent race riots. Young men barely able to shave were shipped away to die in a sweltering jungle on the other side of the world, and the protests of those in opposition to this war often turned to bloodshed. As the decade wound down, two very good men who dreamt of a better tomorrow were cut down within mere months of each other. 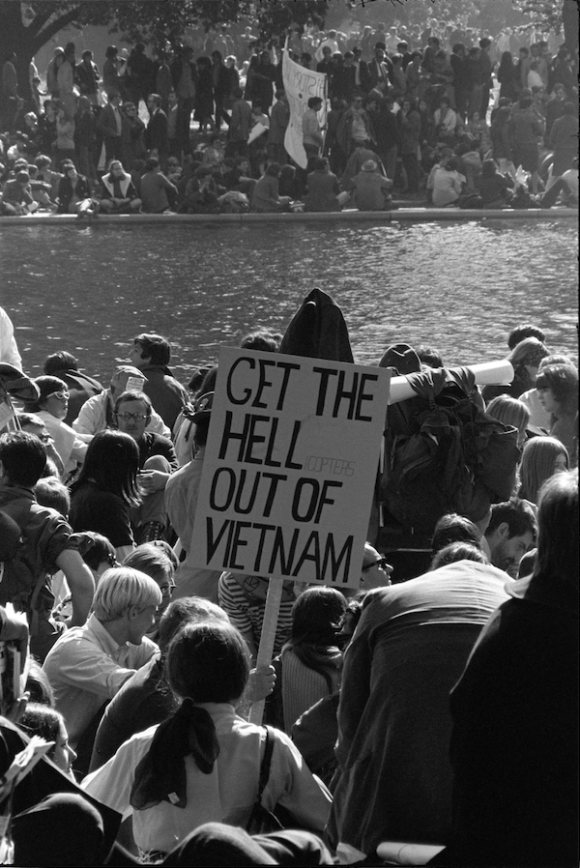 Kids like me knew this stuff was going on. We couldn’t help but see it on the nightly news, in the newspapers, and on the covers of magazines. Yet we, as children, enjoyed an escapist popular culture where silly super-heroes, surfing, swinging spies, kooky castaways, and yeah-yeah-yeahing fab foursomes offered a security blanket guaranteed to deflect any frightening real-world headline. This was my childhood. For every nightmare I had about a political assassination or a napalm-burned Vietnamese girl, my campy comic books, crimefighters, and culture brought me welcomed solace. 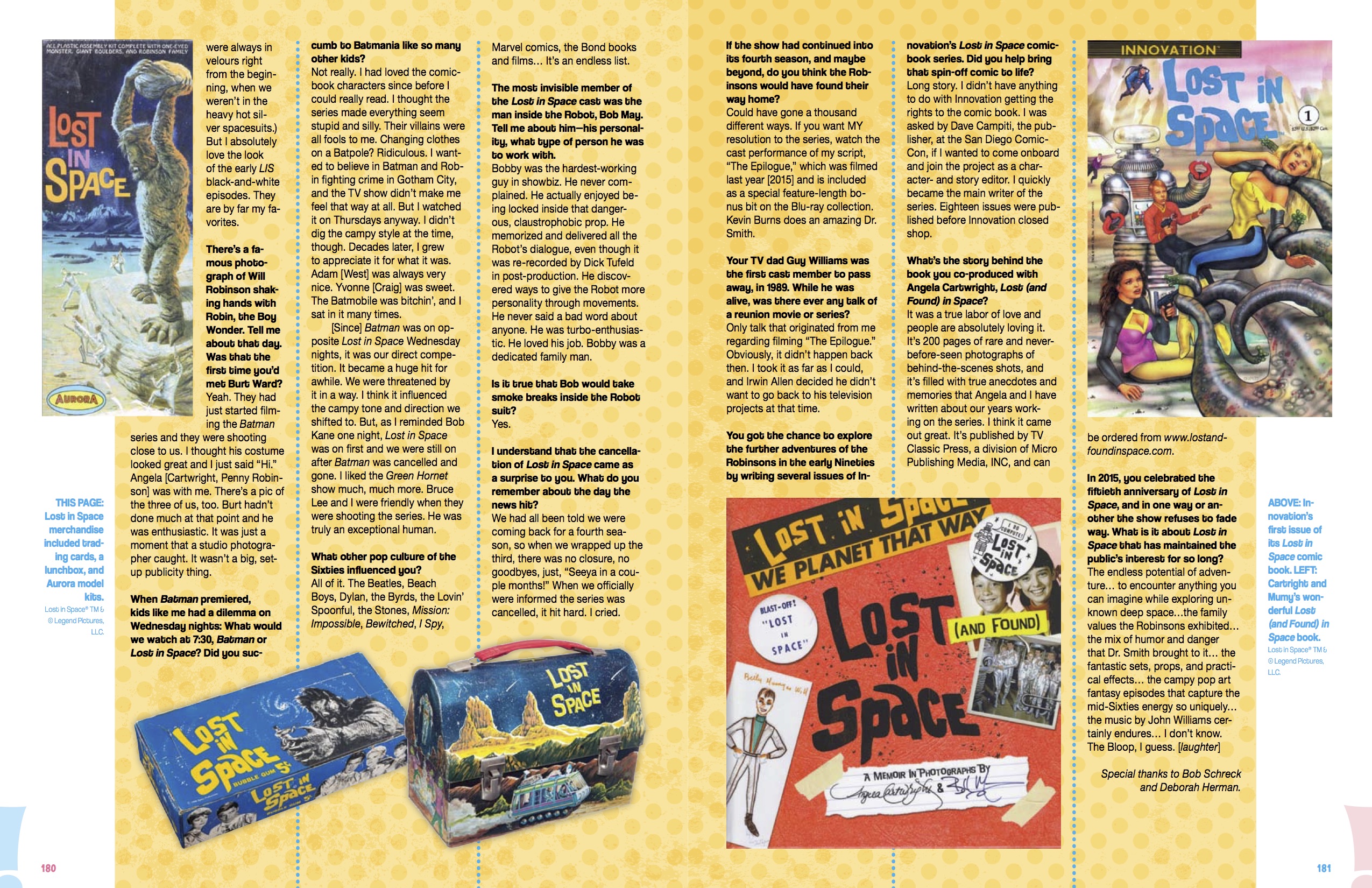 Hero-A-Go-Go embraces what I call the Camp Age, the era when spies liked their wars cold and women warm, when good guys beat bad guys with a pun and a punch. There’s no exact moment when the Camp Age commenced, no single movie or comic book or TV show or cartoon one can cite, but the 1968 cancellation of TV’s Batman was the beginning of its end. The Silver Age of Comics and the Camp Age aren’t interchangeable, although the latter was an outgrowth of the former. Somewhere along the way during the superhero renaissance of the early Silver Age, comic-book writers attempting to replicate Stan Lee’s vitality at the up-and-coming Marvel Comics instead played it so over-the-top that their efforts made drag-queen stage shows seem restrained. The TV and music industries caught this fever, joining comicdom’s mad, mad, mad rush to produce material to satiate a growing demand. What we got during the Camp Age was a hodgepodge of standup comedians moonlighting as crime-crushers, shaggyhaired singing heartthrobs and goofballs swaying a generation of girls and boys, and a Batman who could shake a mean cape. 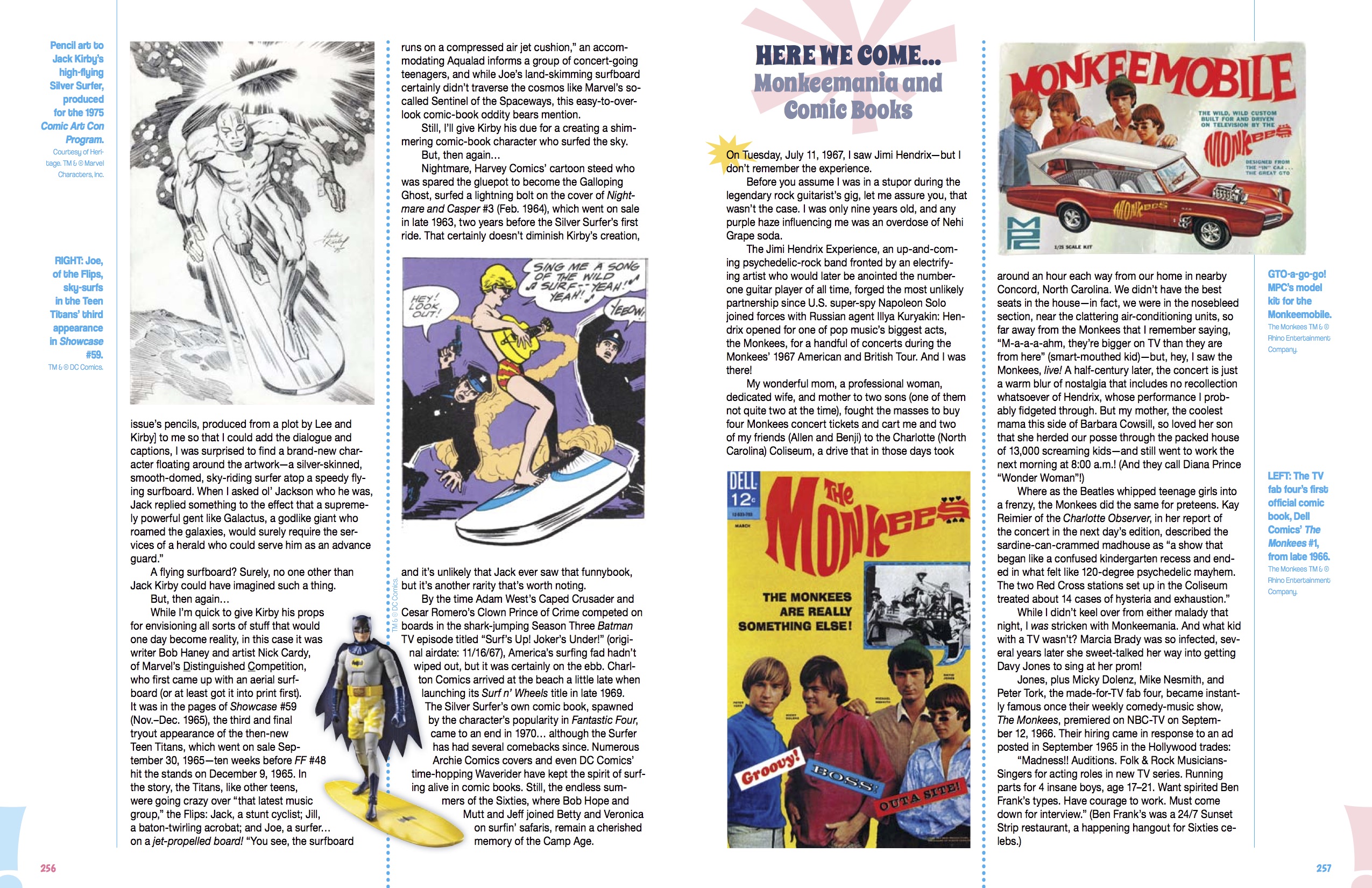 Fifty years after I first gasped at Molly’s Batcave demise, I’m no longer the wide-eyed, impressionable boy whose life was altered by the viewing of a colorful television program. Or am I? I’ve faced my share of adversities, from career calamities to medical mishaps to lost loved ones, but through it all have maintained a positive attitude. That I attribute to my “babysitters”—the heroes, icons, role models, father and mother figures, and entertainers provided to me by the comic books, television, and music of my childhood. If you’re inclined to read a book titled Hero-A-Go-Go, chances are these were your babysitters, too. Much of what they did was unbelievable or foolish, but they took our minds off of how scary the real world could be and brought a smile to our faces. These are the stars of Hero-A-Go-Go: Campy Comic Books, Crimefighters, and Culture of the Swinging Sixties, and their stories unfold in the collection of essays that follow.

So what are you waiting for? Let’s go-go! 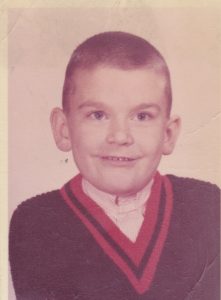 NEXT WEEK: The Teen Titans make the scene! Click here.