We make a trip to Alpha Centauri for this week’s HERO-A-GO-GO! excerpt.

Every Saturday for 13 weeks, we’re serializing Back Issue editor Michael Eury’s upcoming book Hero-a-Go-Go! — a ginchy exploration of the Silver Age and Swingin’ Sixties. For other installments, click here.

Hero-A-Go-Go! is chock-full of photos, historical information and reminiscences. But there’s also a hefty dose of interviews.

One of them jumped out at me: Bill Mumy. 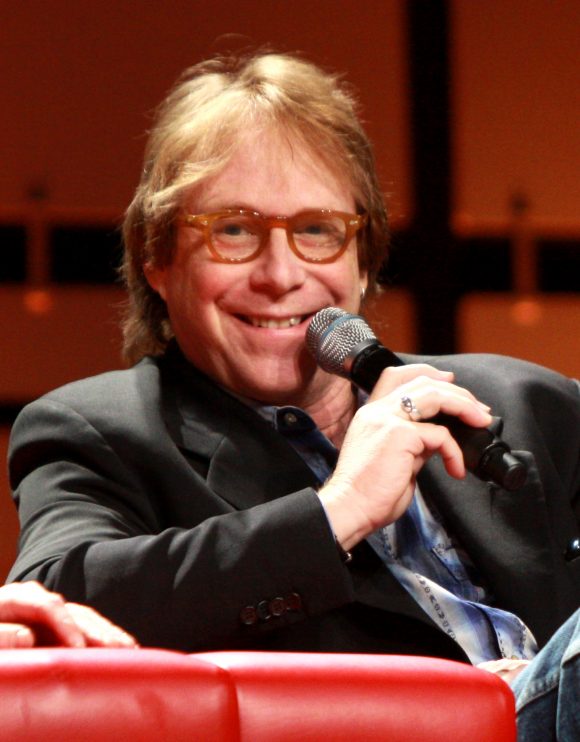 See for me, Lost in Space was the other adventure show I loved as a kid, the one without the guy running around in Batears. I’d play with my friends and my sister, and I even “built” my own Jupiter 2 by taking two paper plates, flipping one over and stapling them together. Some crayon work and — voila! — I was on my way.

I was also pleased as punch to get my own Robot awhile ago. (Click here. You’ll dig it.)

But the Bill Mumy interview also jumped out at me because he’s going to be joined by Angela Cartwright, Marta Kristen and Mark Goddard at buddy Cliff Galbraith’s East Coast Comicon on April 29-30 — and I’ll be moderating their reunion panel. (Click here for info and tickets.)

In the meantime, enjoy this interview excerpt from Hero-A-Go-Go! I’ve just picked out a few highlights. There’s much more in the book itself.

Michael Eury: Before I ask questions of Bill Mumy, the adult creative artist, can we channel Billy Mumy, the child actor, for a moment? Tell me how you, as a kid, felt the day you first saw the elaborate Jupiter 2 set for Lost in Space.

Bill Mumy: I hate to disappoint people when they expect me to have reacted like I was really feeling like I was seeing a legit spaceship, or a real robot, etc., when I was a kid. But the truth is, I’d been on sets and locations and around lots of props and in all kinds of wardrobe for half my life by the time we started Lost in Space. I was a seasoned pro by then. The LIS sets were truly impressive… but remember, they were spread out over two separate sound stages on the 20th Century Fox lot. The upper deck was on one stage, the lower on another… we had swing sets that connected and disconnected… no ceilings… big lights, cameras, and cranes and cables and crew always everywhere. I LOVED the look of the show. But I never got caught up in the feeling that it was anything other than just cool sets and props and acting. 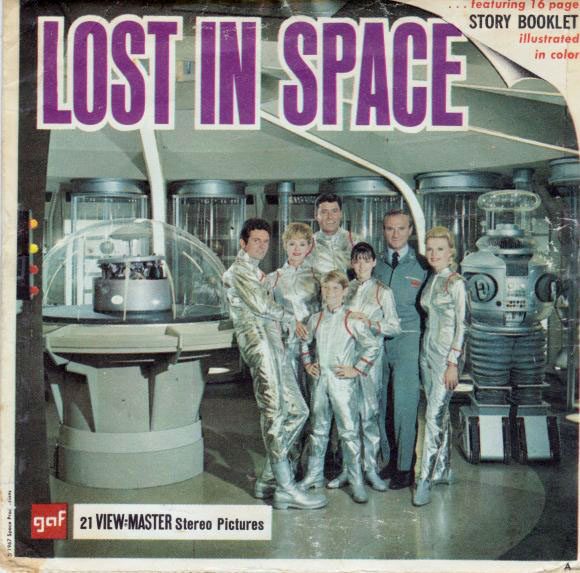 Michael: Although you had been acting for several years and were quite experienced, Lost in Space was your first hit…

Bill: Well, I’d been in a ton of “hits” before LIS. Three Twilight Zones, three Hitchcocks [Alfred Hitchcock Presents], two Loretta Young Shows, the hit Westerns of the day, several major studio feature films, Disney films, etc. We were all proud of the success Lost in Space achieved and we all paid attention to the ratings every week, but I don’t think we ever felt like we were a big hit at the time. Successful, yes. But, we certainly were no Bonanza.

Michael: Let me rephrase that—Lost in Space was the first show you started on from Day One, and there was a lot of LIS merchandising, with your likeness on trading cards and toys and such. How did you, as a kid, process that fame?

Bill: The merchandise was very cool, and I used to go up to Irwin Allen’s office often and he’d allow me to take “one” of the current LIS merchandise stuff he had laying around. I dug it, but it never felt like much of a big deal to me at the time. I enjoyed being part of the Aurora Model kit… None of my real friends ever treated me special or acted like they were impressed by what I was doing when I wasn’t tossing a Frisbee around with them. Basically, I left my work at work and then became a normal kid. I didn’t think about processing fame.

Michael: When did you discover comic books?

Bill: Hmmm… Probably at the age of five. 1959. O the rack at Super Drugs in Beverlywood. But I had been totally into The Adventures of Superman on TV since I was born, basically.

Bill: That was pre-Marvel… I guess, all the Superman and Batman books were my favorites. Action, Superman, Batman, Detective, World’s Finest, Jimmy Olsen, Lois Lane, Adventure Comics… I liked The Flash a lot.

Artists that resonated the most with me back then were Wayne Boring and Curt Swan. Infantino’s Flash, Shelly Moldoff ’s Batman stuff…

When Marvel first hit, I, of course, became a HUGE Kirby and Ditko fan. I bought ALL the books every week. 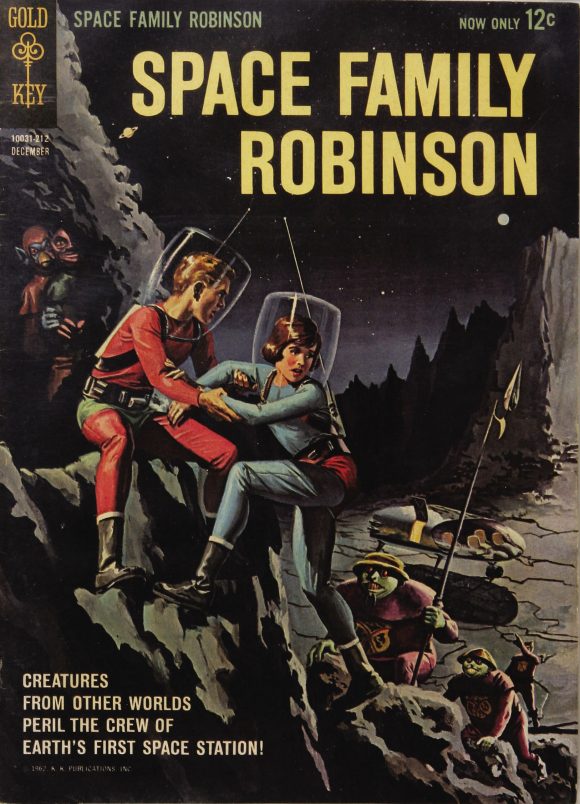 Bill: At the time? Nope. Once, maybe. Didn’t dig it at all. I wasn’t into the Gold Key titles—Magnus, Solar, etc. But I liked what Jim Shooter did with them at Valiant 30 years later.

Michael: Gold Key’s Space Family Robinson co-opted Lost in Space as its subtitle because of your show, but the comic stayed on its course with its own Robinsons. To your knowledge, though, was there ever any consideration given to doing a TV adaptation comic book of Lost in Space while your show was in production?

Bill: No. Since Gold Key was publishing the Space Family Robinson: Lost in Space comic back then, that rendered it moot.

Michael: That’s too bad. The photo covers of a Lost in Space TV tie-in comic would have been cool. (Note from Dan: Since this interview was conducted, American Gothic produced a series of comics based on two Carey Wilber unpublished LIS scripts — with photo-cover variants. Click here.) 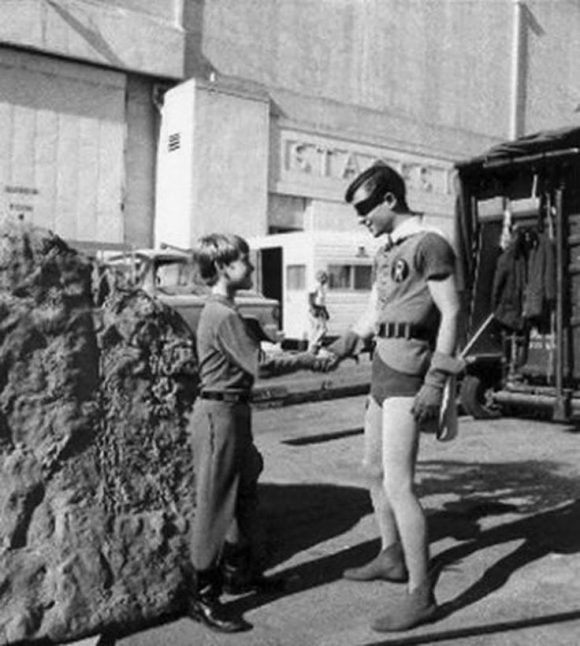 Michael: There’s a famous photograph of Will Robinson shaking hands with Robin, the Boy Wonder. Tell me about that day. Was that the first time you’d met Burt Ward?

Bill: Yeah. They had just started filming the Batman series and they were shooting close to us. I thought his costume looked great and I just said “Hi.” Angela [Cartwright, Penny Robinson] was with me. There’s a pic of the three of us, too. Burt hadn’t done much at that point and he was enthusiastic. It was just a moment that a studio photographer caught. It wasn’t a big, set-up publicity thing.

Michael: What other pop culture of the Sixties influenced you?

Bill: All of it. The Beatles, Beach Boys, Dylan, the Byrds, the Lovin’ Spoonful, the Stones, Mission: Impossible, Bewitched, I Spy, Marvel comics, the Bond books and films… It’s an endless list.

Michael: What’s the story behind the book you co-produced with Angela Cartwright, Lost (and Found) in Space?

Bill: It was a true labor of love and people are absolutely loving it. It’s 200 pages of rare and never-before-seen photographs of behind-the-scenes shots, and it’s filled with true anecdotes and memories that Angela and I have written about our years working on the series. I think it came out great. It’s published by TV Classic Press, a division of Micro Publishing Media Inc. and can be ordered from www.lostandfoundinspace.com. 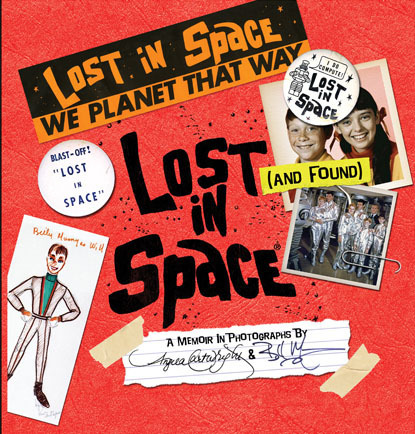 You can order tickets to East Coast Comicon here.