A BIRTHDAY TRIBUTE: Late artist Frank Springer was born 92 years ago… Late artist Frank Springer — born 92 years ago on Dec. 6, 1929 — had a lengthy, varied career but to me he will always be, first and foremost, the man who illustrated the greatest detailed look at Batman’s headquarters and equipment: Secrets of the Batcave — 1968, from Batman #203. These four pages, which have been reprinted numerous times in the decades since, has been my mental blueprint for the Batcave since early childhood and is still the quintessential cutaway of the cavernous command post under Stately Wayne Manor. So, in honor of Springer’s birthday, we present 13 QUICK THOUGHTS ON THE GLORIOUS SECRETS OF THE BATCAVE — 1968: — 1. If you’re reading this, you’re probably familiar with the feature, but to recap, Secrets of the Batcave — 1968 is four pages, including a two-page splash of Wayne Manor and the Batcave, a page the explains the intracacies of Batman and Robin’s utility belts and a page on various other equipment, including the Batarang and Batplane. Batman #203 was an issue filled with reprints spotlighting various aspects of Batman’s arsenal. — 2. I love that it’s detailed and still so low-tech that it’s out of scale. Just compare the size of the Batcomputer to Wayne Manor. The computer itself would take up an entire wing of the mansion! 3. I would stare and stare at the utility belt page, especially Batman’s. It was fantastic to see each capsule accounted for — a bold move when you consider that Batman could pull a kitchen sink out of there if the situation warranted it. The little detail that one of the capsules is a mini-power source for the rest of the gadgets is ingenious. I don’t recall whether that had ever been noted before but I dig it. — 4. I also really appreciated seeing how Robin’s belt worked — the pouches were on the inside. It was the perfect answer for why the outward side was so smooth and clean. — 5. As noted above, it’s not the first time DC did this. There were cutaways going back years — Batman #203 included one from 1948’s Batman #48, for example — but none offered this level of detail or demanded so much space. — 6. Before...

BRONZE AGE BONANZA: One of the grooviest months of the year! — Welcome to BRONZE AGE BONANZA — our monthly series that looks at the greatest covers of the Bronze Age — exactly 50 years later. For more info on this feature, click here. — It’s the last month of the year — and an especially strong one, especially if you’re a big fan of Gil Kane, Nick Cardy and Neal Adams. But those aren’t the only big names, of course. And don’t forget: At the end of this month, we’ll be doing the TOP 13 covers for ALL of 1971. But until then, dig the TOP 13 COVERS OF DECEMBER 1971: — 13. Girls’ Love Stories #166, DC. Two things: I LOVE that groovy screen next to the woman in the wheelchair. And it certainly looks like Nick Cardy drew each funky design, which makes it that much cooler. But here’s something else: When researching this one I kept finding the notation “wheelchair cover,” which I didn’t know was a thing. Also, I don’t think Margo and Chuck should marry. — 12. World’s Finest #209, DC. The Tempter really shouldn’t give Superman and Hawkman that much trouble but Neal Adams and Dick Giordano make this one of the most memorable Superman team-up covers. That’s how it’s done folks: Work with what you’ve got. — 11. Superman #248, DC. One of the classic images of Luthor before the Jumpsuit Era. Also, post-apocalyptic Superman was really a thing in the early ’70s. Also, also: I didn’t know the Flatiron Building was in Metropolis. Cool! — 10. The Amazing Spider-Man #106, Marvel. Just another classic Spidey cover pencilled by your friendly neighborhood John Romita. — 9. House of Secrets #96, DC. Stop and take a moment with this one, a beautifully illustrated piece by Bernie Wrightson. I’m actually most impressed by the desk details — particularly the demonic gargoyles at the corners and the fringe on the lampshade. That’s hardly the point of the cover but those kinds of touches are what separate a master like Wrightson from so many others. Furniture matters. — 8. Amazing Adventures #11, Marvel. Lo! The first appearance of furry Beast! And Gil Kane again proves he was the artist best equipped to manage the space constraints of Marvel’s “framed” covers of the era. Breaking the... 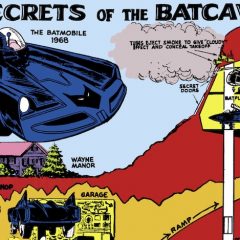 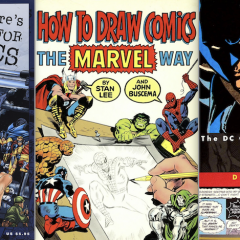 The celebrated Mr. K highlights works that can make you a better storyteller — with or without pictures… 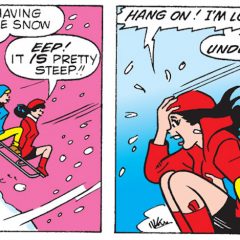 Three weeks until the big day! 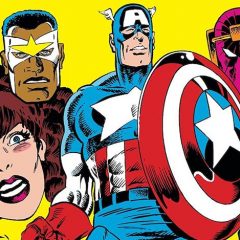 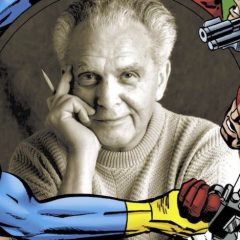