Don Martin is a 13th Dimension favorite, which is kind of a stupid thing to say since he’s pretty much an everyone favorite. He was the kind of artist who could make you crack up with a single panel or, even better, sound effect. (POIT being the greatest ever.) Anyway, Michael Eury gets it and he wrote the column below as part of Hero-A-Go-Go!’s sizeable humor section:

Let me tell you something about Don Martin that you probably don’t know: He was a 20th Century Ponce de Leon.

While he didn’t discover the fabled Fountain of Youth, he did the next best thing by cartooning in  a manner that could make any fella feel like a boy again. From his trademarks such as wiener heads, potato noses, pot bellies, and at flipper feet, Martin’s grotesque, utterly hilarious cartoons harkened back to the generation before mine, where comic books—especially MAD Magazine—were considered dangerous, subversive, and lowbrow, the stuff kids secretly read past bedtime under the covers with a flashlight.

To this day I can remember eyeing for the first time The MAD Adventures of Captain Klutz, the 192-page Signet Books paperback featuring Martin’s outrageous super-hero burlesque. 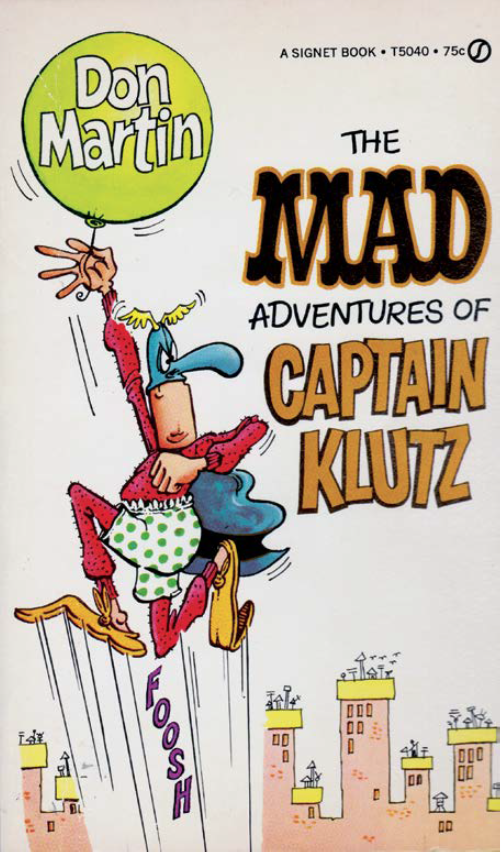 It was sometime in 1967. I was nine and had arrived at my hometown’s primary comic-book source, Williams Candy Kitchen, for the latest Batman funnybooks.

I had recently discovered MAD, with its fabled “Bats-Man” take-off in Issue #105 (Sept. 1966), and spotted Don Martin’s signature drawing style on the Klutz cover before noticing his name in the balloon that was levitating his hero skyward. Unlike other super-heroes, Captain Klutz didn’t look like he had just slid down a Batpole or stormed  out of a phone booth.  He looked like he had just crawled out of bed: red, wool longjohns, polka-dotted boxers (worn on the outside of his pants, per super-hero customs of the day), and bunny slippers.

“Why has he dedicated himself to a life of crime fighting?” asked the back cover copy. “Who really cares?” I was still too young to appreciate the Camp humor in TV’s Batman, but this, I found funny.

Captain Klutz could’ve been used as a parable to warn kids about the dangers of reading too many comic books, so we wouldn’t turn out to be a total loser like Ringo Fonebone. When we meet him, Fonebone has spent his life doing nothing but reading comics: Fester and Karbunkle,  Brap Man, The  Creep, Cockroach Man, The  Purple Fink, The  Plastic Freak,  Acid Nose, you  name it, he reads  it. His parents  have finally had  enough and boot  the adult Ringo  out of the house.  What follows is a  downward spiral  that leads him  to one conclusion: He has to  end it all.

Clad in his underwear and slippers, Fonebone knots together a network of towels as a noose and hurls himself off a rooftop. This may sound distasteful at worst, seriocomic at best, but through the pen of “MAD’s Maddest Artist” it’s an insane sequence of pratfalls.

Ringo’s towel rips, he plummets into an ugly lady’s hat, which “masks” him, and finally crashes atop a fleeing bank robber who snaps, “Why, you klutz!” And thus is born the caped protector of Megalopolis: Captain Klutz! 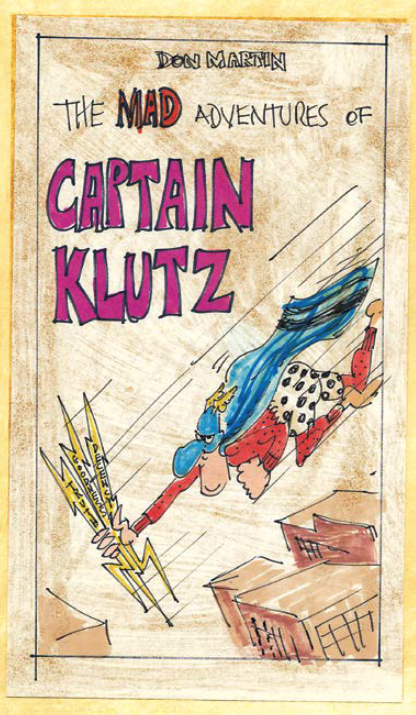 A rough of an unused cover. Copyright Don Martin.

Captain Klutz may have been Don Martin’s baby, but he was created by committee, with MAD’s Dick DeBartolo, Duck Edwing, Phil Hahn, Jack Hanrahan, and Nick Meglin in on the fun, capitalizing on the Camp Age’s super-hero craze.

Some of Captain Klutz’s shtick was recycled from the Golden Age of Comics — red longjohns were the fighting togs of the original Red Tornado, and the character Supersnipe was known as “The Boy with the Most Comic Books in America.” And Captain Klutz certainly wasn’t the only super-hero spoof in town at the time.

But where as the Inferior Five’s and Forbush Man’s hands were tied by the Comics Code Authority and TV’s Captain Nice and Mr. Terrific were tamed by network Standards and Practices, there were no such restraints on Captain Klutz. His failed-suicide origin aside, Captain Klutz relished its lack of political correctness. 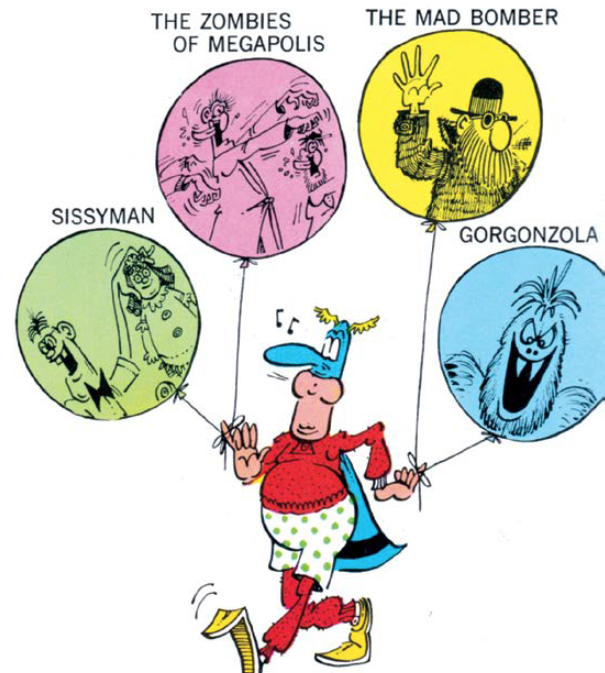 Ringo Fonebone read Super Faggot and The Fat Maniac comic books, fought the doll-collecting Sissyman, accidentally disrobed a woman while changing in a phone booth, and paraded around naked (aside from a discreetly placed fig leaf) — and that was just in the first 78 pages! Following were battles against zombies, a giant spider named Gorgonzola, and Mervin the Mad Bomber, plus other strips and gags.

Captain Klutz returned in a handful of Don Martin paperbacks and received a sequel edition in 1983. Still, nothing can top the original edition for its freshness and funniness… and its ability to make a middle-aged man feel like a nine-year-old again.