REEL RETRO CINEMA: New looks at old flicks and their comics connections… — Superman II debuted 40 years ago in the US on June 19, 1981 — a superhero cinematic touchstone beloved for decades. To celebrate, we’ve invited the hosts of the ever-popular Superman Movie Minute podcast — 13th Dimension regulars Rob Kelly and Chris Franklin — to take bring you an INSIDE LOOK at one of the greatest comics films in history. Here, Rob salutes the movie from a four-decade perspective. Meanwhile, Chris ranks the TOP 13 SUPERMAN II COLLECTIBLES (click here). Dig it. — Dan — By ROB KELLY The time: Most likely Saturday, June 20, 1981. The place: the Westmont Theater in Westmont, NJ (a location supposedly frequented by a young Steven Spielberg when he briefly lived in the area). The 9-year old me was spending my afternoon watching Superman II for the first time. The Westmont was an old, classic movie palace, with ornate fixtures, red plush carpeting, and a vast balcony, seating what seemed like 10,000 people. Having completely adored Superman: The Movie, I was understandably eager to see the follow up. If memory serves, the theater was packed to the rafters, mostly with kids my age, dropped off by their parents who were probably happy for the few hours of peace and quiet the movie afforded them. I was delighted with the film from its very first frame, since, as we’ll discuss shortly, Superman II wore its comic book-y roots on its bright blue sleeves, and for a 9-year old comics fanatic, that was exactly what I wanted. But nothing prepared me for the moment when General Zod, Ursa, and Non attacked the Daily Planet building, laying waste to Perry White’s office and threatening to do the same to Lois, Jimmy and (less worryingly) Lex Luthor. Just when things seemed at their most dire, we heard that theme start to play, accompanied by a quick shot of our hero flying up to the window, and delivering this line: The theater erupted. No, beyond erupted — it exploded with a force rivaling the destruction of Krypton, recapped at the start of the movie. I don’t think I heard much, if any, of the dialogue for the next few minutes, because all the other kids and I were cheering so loudly. It was one of...

REEL RETRO CINEMA: New looks at old flicks — and their comic-book connections… — UPDATED 6/1/21: Ron Ely’s cult-fave Doc Savage: The Man of Bronze was released in June 1975 (the closest we could find to a release date) and with today the first of the month, it seemed like a good time to re-present this 2017 piece by Rob Kelly. You can also check out Rob’s episode of The Film and Water Podcast about it too. Click here. — Dan — By ROB KELLY Doc Savage was Superman before Superman. Possessor of a brilliant intellect, enhanced strength and a remote base of operations called the Fortress of Solitude, the man known as Clark(!) Savage Jr. was a creation of three men: Henry W. Ralston, John L. Nanovic and Lester Dent. Dent was the man who wrote most of Doc’s adventures for various pulp magazines of the 1930s and ’40s, and built the world that Savage would inhabit. Despite the character’s popularity in the pulps, his owners Street & Smith couldn’t drum up much interest in the character when it came to other media, outside of a short-lived radio show. Hollywood didn’t attempt any live-action adaptations for decades. A set of producers, Mark Goodson and Bill Todman, got close in the mid-1960s, trying to capitalize on the re-issued pulp novels (featuring staggeringly beautiful painted covers by artist James Bama) and the growing James Bond craze. But legal issues thwarted them and it would be another decade until the Man of Bronze finally hit the silver screen. In 1975, legendary producer/director/animator George Pal succeeded where Goodson and Todman did not, and got Doc Savage: The Man of Bronze made, with the help of Warner Bros. Directed by Michael Anderson (Around the World in 80 Days, Logan’s Run), the film starred Ron Ely (TV’s Tarzan) as our hero, with William Lucking, Michael Miller, Eldon Quick, Darrell Zwerling and Paul “You mess with the bull, you get the horns” Gleason as Doc’s team of highly-skilled, brave compatriots, The Fabulous Five: Renny, Monk, Johnny, Ham and Long Tom. Nostalgia for 1920s and ’30s culture was sweeping the nation in the 1970s, and that feeling is present in Doc Savage: The Man of Bronze from the first frame. Set to a score by John Philip Sousa (patriotically spelled SoUSA in the credits), the film... 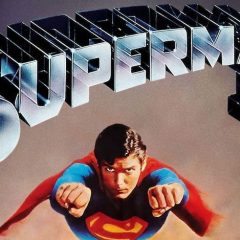 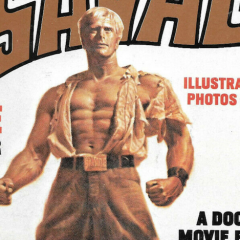 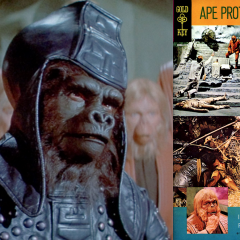 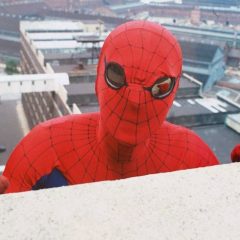 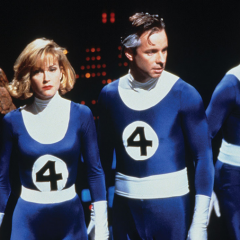 Roger Corman’s FANTASTIC FOUR: Still Bad After All These Years 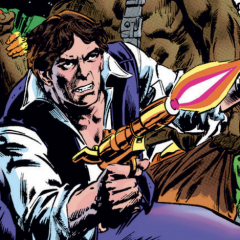