TOYHEM: A veritable platoon of Hasbro’s Movable Fighting Men… — Welcome to TOYHEM! For the fourth straight holiday season, we’re bringing you a series of features and columns celebrating the toys of our youth, which often made for the best memories this time of year. Click here to check out the complete index of stories — and have a Merry Christmas, a Happy Chanukah and Happy Holidays! — Dan — By JIM BEARD No matter how much I’ve talked about the toy over the years, it’s still a challenge for me to quantify my love for the original GI Joe. We’ve been together, see, since I was 4 and there’s a lot of history there. I met Joe on Christmas ’69 — Christmas Eve, to be exact — and though I’ve had other toys since that fateful meeting, none have measured up to the stature, the grandeur, the sheer coolness of America’s Movable Fighting Man. If you’re not that familiar with the original Joe, I’m hoping the following pictorial will impart some of what I’m trying to say about the toy. There was nothing like it before his debut in 1964, and in my opinion, there’s been nothing like it since. So, this is an ode to the so-called “military era” of GI Joe, the 1964 to 1969 stretch when soldier toys were a thing and it was OK for boys to have dolls… err, “action figures.” I’ll keep the verbiage to a minimum so as to concentrate on the figures themselves, because even all these years later — and me having published a non-fiction book about Joe and my homage fiction “DC Jones” series — I still find it hard to shape a solid salute to my old chum. These are the 13 vintage “soldier era” GI Joes I own. Enjoy. (Dan adds: Also check out Jim’s TOP 13 GI JOE ADVENTURE TEAM Accessories and Playsets. Click here.) — Action Soldier. It all starts here, the most basic of Joe figures, the common army grunt. — Talking Action Soldier. A variation on the previous grunt, with full pack and loaded for bear. This figure belonged to a childhood friend of mine. It still talks. — Action Pilot. Just as he came out of the box. — Scramble Pilot. “Scramble” is one of the coolest sets for the Action Pilot. Unfortunately, there’s no parachute...

TOYHEM: Adventure Team time with Jim Beard! — Welcome to TOYHEM! For the fourth straight holiday season, we’re bringing you a series of features and columns celebrating the toys of our youth, which often made for the best memories this time of year. Click here to check out the complete index of stories — and have a Merry Christmas, a Happy Chanukah and Happy Holidays! — Dan — UPDATED 12/3/22: This first ran in 2021 but makes for a wonderful companion piece to Jim Beard’s new column on 13 COOL VINTAGE GI JOE FIGURES. Click here. — Dan — Last week, we kicked off this year’s TOYHEM with 13 GREAT ACTION JACKSON OUTFITS AND PLAYSETS since it’s the 8-inch hero’s 50th anniversary. 13th Dimension columnist Jim Beard did the honors and you oughta click here to check it out. But, hey, even those of us who love Mego’s AJ know that he was a response to Hasbro’s GI Joe. So turnabout being fair play, Jim is back with the TOP 13 GI JOE ADVENTURE TEAM ACCESSORIES AND PLAYSETS. Most of you know Jim from his Batman ’66 books or his Marvel expertise, but he’s also a writer who’s published two novels about a character very much like G.I. Joe (and Action Jackson): DC Jones – Adventure Command International. The covers look just like retro outfit boxes and have appropriately pulpy titles: Secret of the Sunken Tomb and Rescue at the Arctic Outpost. So now you have a couple things to add to your holiday list: They’re both available at Amazon (click here). Not just that, but Jim was the editor of The Joy of Joe, a history of the beloved action star. (Click here to grab it on Amazon.) Anyway, Jim’s GI Joe bona fides are crystal clear — so here we go with his TOP 13 GI JOE ADVENTURE TEAM ACCESSORIES AND PLAYSETS: — By JIM BEARD My problem is that it’s hard for me to know where to start with the GI Joe Adventure Team. See, since Christmas of 1969, GI Joe has remained not only my most favorite toy of all, but a part of my psyche. The Adventure Team looms so large in life, it’s become an inspiration in my writing and a basis for friendships. Given all that, the idea of picking just 13 aspects of the action figure... 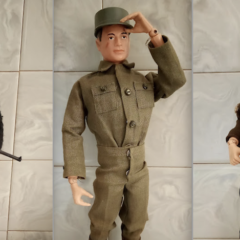 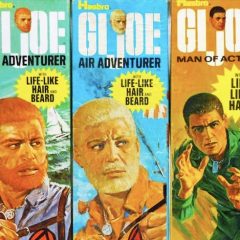 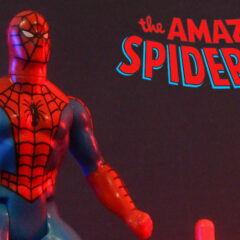 TOYHEM! A bounty of beautiful plastic… 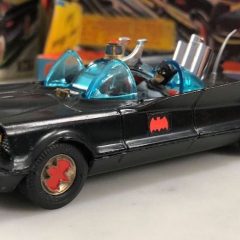 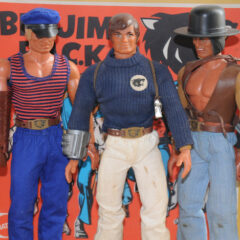 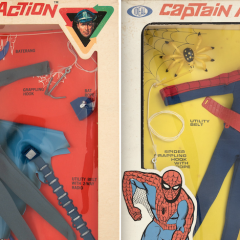 TOYHEM! The fan-fave artist brings us full circle with a fond remembrance of the hero of many masks…