UPDATED 8/20/17: Jerry Lewis has died at the age of 91. Please enjoy this excerpt from Michael Eury’s Hero-A-Go-Go! that we published earlier this year. It’s as relevant today as it was then.

I was originally going to feature Palisades Park in this week’s excerpt but then I saw that Jerry Lewis turned 91 this week and, wouldn’t you know it, Michael Eury devoted more than seven pages of his book to the funnyman and his comic-book adventures. So here we are.

Now, I gotta tell you: I don’t think I ever expected to see such a comprehensive round-up as what Michael’s put together but consider this: DC published The Adventures of Jerry Lewis (and its predecessor, co-starring Dean Martin) for almost 20 years straight, from 1952 to 1971. Aquaman can only wish for that kind of consistency.

Occasionally, DC had Lewis meet up with some of the company’s biggest guns, namely Superman, Batman, Wonder Woman and the Flash. (He also did a turn satirizing Spider-Man.) Michael’s outlined them all.

But I’m highlighting one such team-up in this excerpt: When Jerry crossed paths with the Caped Crusader. Why Batman? Simple. I dig him the most.

Personally, I have some pretty fond memories of Jerry Lewis growing up. He was my sister’s favorite when we were little and we used to try to stay up as late as we could every Labor Day eve to watch the Telethon. (We never made it to dawn.) It was a minor event whenever Cinderfella popped up on TV. Our parents even took us to see him at the Garden State Arts Center. We had lawn seats and I fell asleep.

In the episode The Bookworm Turns (original airdate: 4/20/66), as Batman and Robin are scaling a wall, who should pop his head out the window but Jerry (called “citizen” by the Gotham Guardian). Jerry’s response as he eyes the Dynamic Duo’s feat of derring-do: “Holy human flies!”

Later that year, DC house ads teased the “Holy partnership!” between “the King of Kooks” and the Caped Crusader: Batman Meets Jerry! in The Adventures of Jerry Lewis #97 (Nov.–Dec. 1966, on sale Sept. 20). By this point, Jerry Lewis had taken to calling itself “America’s Funniest Comic Mag!” on its covers, a well-deserved sobriquet, since the writer/artist team had gelled to perfection. Herein, Bob “Penman” Oksner and Arnold “Punman” Drake (as described in the Stan Lee-ish credits box) deliver one of the best send-ups of Batmania.

Jerry’s nephew Renfrew is, like so many millions of American kids, batty over Batman, and persuades his “unc” to become crimefighters like the Dynamic Duo. Thanks to Renfrew’s costume-making, Jerry and Renfrew adopt the guises of Ratman and Rotten, the Boy Blunder. Later, Renfrew is kidnapped from his bed by the city’s newest super-villain, the Kangaroo (aided by his son, a costumed joey), and Jerry tries to save him as Ratman, only to be cold-cocked by his own Ratarang. He awakens bound and gagged, but is rescued by none other than Batman and Robin, exhausted over their efforts to save other Dynamic Duo wannabes (such as Catman and Kitten, and Fatman and Tubbin). 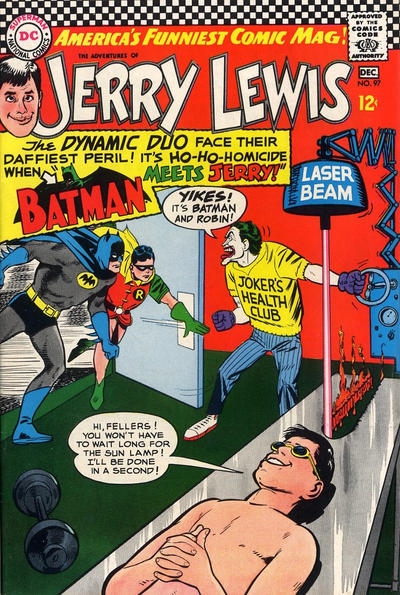 Ratman joins forces with Batman and Robin to track down Jerry’s abducted nephew, and from this moment on, no Bat-ism is sacred. Batman and Robin act similarly to the campy Adam West and Burt Ward interpretations, then routinely break character to react to the lunacy of it all.

An example: After Ratman mistakenly presses the wrong button in the Batmobile and ejects its three passengers into the air, a flabbergasted Batman calls Jerry a “stupid idiot” before correcting himself: “Uhh—I mean, you impetuous lad!” To this, Robin remarks, “That’s another thing about this job—Batman’s never allowed to get angry! They’re afraid it would corrupt the youth of the nation!” 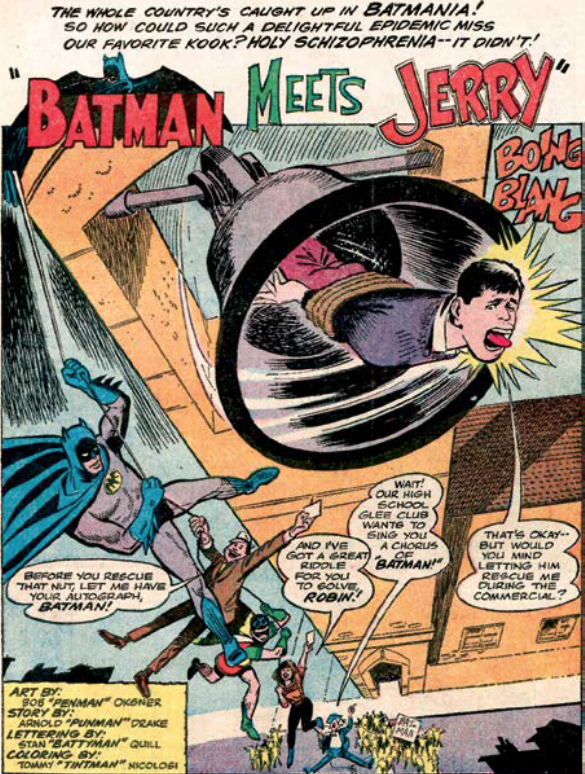 While Drake’s script is pun-loaded, as promised in the credits, Oksner’s art is a delightful mash-up of styles, from his own flair for dead-on Jerry Lewis caricatures, to his penchant for beautiful females (a redhead, described by an infatuated Renfrew as “a swingin’ lookin’ chick!”), to his lively storytelling. His Batman and Robin mostly follow the house style, with several Carmine Infantino swipes throughout, but he cribs from the Fifties Batman in several cases, including the bubble-topped, Bat-head Batmobile and his rendition of a Dick Sprang Joker and Jerry Robinson Penguin (the Riddler also makes an appearance).

While Oksner had previously drawn Superman and Aquaman cameos in Bob Hope, and had drawn or inked a handful of Golden Age DC superhero serial chapters or short stories early in his career, Jerry Lewis #97 marked Bob’s first opportunity to illustrate a full-length story featuring DC super-characters, something he would regularly do during the Seventies after the popularity of humor comics dried up.

NEXT: Down at Palisades Park. I mean it this time. Click here.