STEVE ENGLEHART: The Importance of the DYNAMIC DUO — and THE PENGUIN

Home » BATMAN'S HOT-LINE » STEVE ENGLEHART: The Importance of the DYNAMIC DUO — and THE PENGUIN

Welcome to INSIDE THE BATMAN: THE STEVE ENGLEHART INTERVIEWS, an issue-by-issue exploration of the greatest Batman story of all time — Steve Englehart and Marshall Rogers’ seminal late ’70s Detective Comics run. The complete story has finally been collected for the first time in hardcover — and in the way Englehart envisioned it — in Tales of the Batman: Steve Englehart. With the book newly released, the time is perfect to go back and look at the story from every conceivable angle. Each weekend this summer, we’re diving into a single chapter of the 8-issue saga, with full commentary by Englehart himself — the most complete analysis of the landmark storyline ever published. For the INDEX of individual entries, click here.

The saga shifts in Issue #473, which is a full-on Batman and Robin story — an atypical occurrence by 1977. It also happens to be perhaps the finest Penguin story ever, or at least the most traditionally entertaining. And of course it looks great.

Overall storywise, Hugo Strange is dead at the hands of Rupert Thorne’s henchmen, the Darknight Detective has been declared an outlaw in his own city, Robin is in town after having rescued Batman and Alfred from Strange’s clutches and Dick Grayson and Silver St. Cloud get a proper introduction… 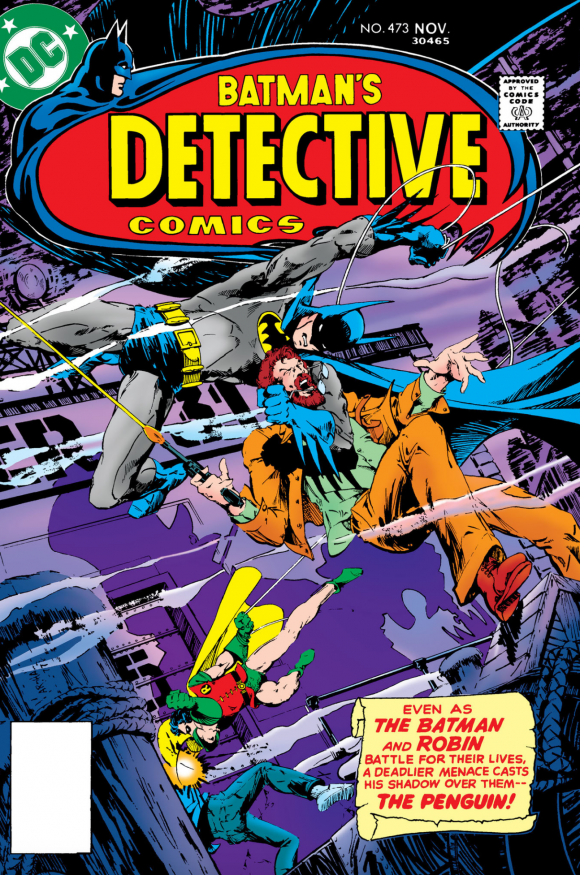 Dan Greenfield: You made sure with all the characters that popped up in the story that you were going to include two major Batman villains in the storyline. Obviously you did the Joker, but then you also picked the Penguin. Clearly a classic villain and he’s a Golden Ager — the Golden Age’s DNA is all over this story. But up to that point he wasn’t taken all that seriously, so what made you include him over any of the others you could have chosen as the second big Batman villain?

Steve: I think of him as being the second big Batman villain. When I was reading stories in the ’50s, they weren’t great stories but the usual deal for the Penguin was that there was some sort of mystery, some sort of clues that he would leave out. The Joker just went out and killed people, he didn’t taunt the Batman. The Penguin usually wanted to have some sort of game with the Batman, and I thought that was fun so then it was incumbent upon me to think up a decent game. Something for him to do. I wanted to do a Penguin story that had clues and that we saw the World’s Greatest Detective figure out what the clues meant. 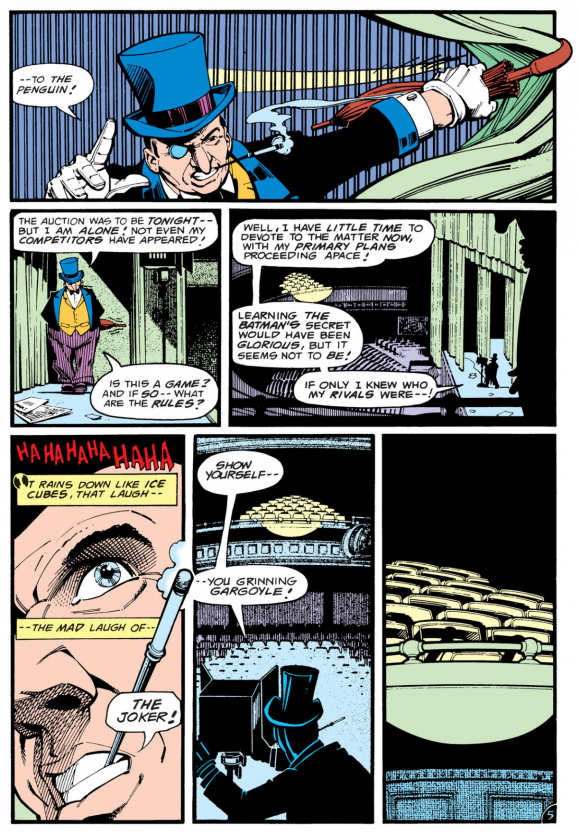 Dan: It’s definitely the most lighthearted chapter in the entire story.

Steve: I wasn’t really trying to make it… (Pauses.) To my mind the Penguin is sort of lighthearted to start with. In Dark Detective III, the unpublished one, I’ve got a more serious Penguin, but this guy, he’s got flying birds and he’s got all that stuff. It wasn’t the dark pulpy thing so much as more like the ’50s thing for him. I like the idea of setting up a puzzle and solving a puzzle all in one issue with the Batman being — he’s supposed to be the World’s Greatest Detective in addition to everything else. 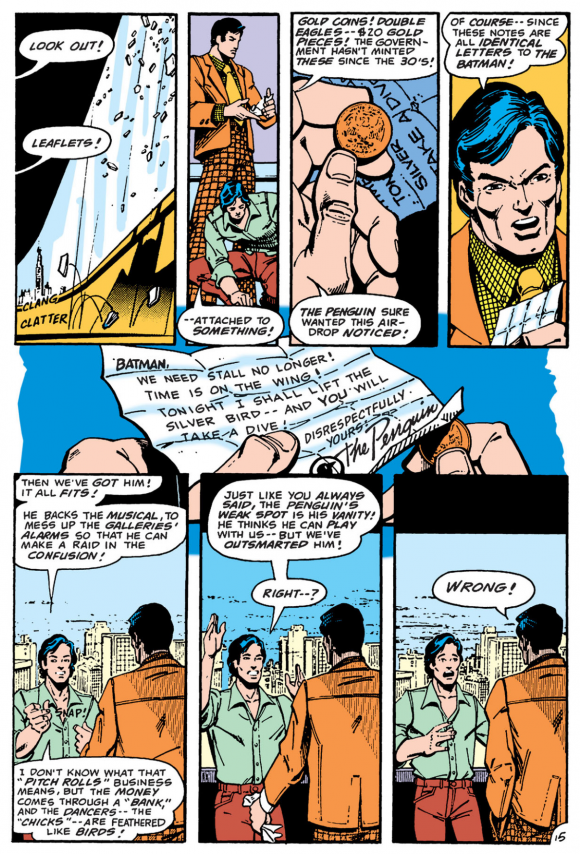 Dan: Everybody talks about The Laughing Fish and how even within the larger story it’s one of the greatest Joker stories ever told, if not the greatest. I’m of the mind that this particular chapter is the greatest Batman and Robin story since the start of the Bronze Age at the very least, and also one of the all-time great Batman and Robin stories. We touched on Robin’s arrival last issue. Tell us a little bit why it was so important that the Dynamic Duo itself got the spotlight.

Steve: Because that’s who they are. The Dynamic Duo. My formative time with Batman was in the ’50s and then the ’60s. I was thrilled when Carmine (Infantino) took over the art every other issue. Batman finally kind of moved forward with the times. But all that stuff was Batman and Robin, and I never — Jules Feiffer in his book made fun of the idea that boys wanted to identify with boys. I don’t know that that was ever true, maybe it was in the ’40s or something, but it was always Batman and then Robin was his sidekick. I was just honoring that I guess. 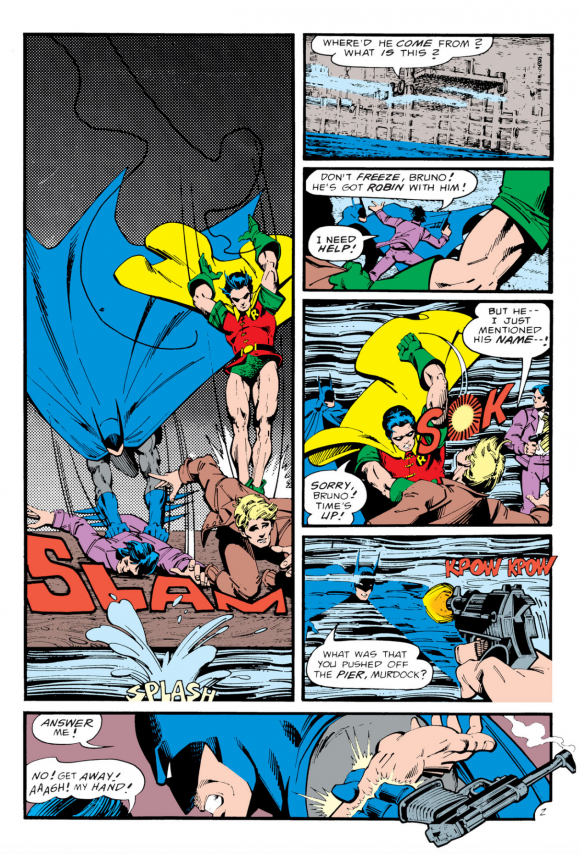 I wanted to see Robin. I wanted to see the Joker. I wanted to see the Penguin. Then I also wanted to throw in Silver St. Cloud and Boss Thorne and build a bigger world, but all those people are essential. I found in later years when I did more Batman, I think the villains fall off pretty quickly after the Penguin. The Scarecrow, you can make the Scarecrow into somebody. Poison Ivy. Catwoman wasn’t even around much at this point in time and hadn’t been for years. You could obviously make people cool. At the time, there was no… Ra’s al Ghul I guess was the only cool new Batman villain in the last 20 years. I say that off the top of my head. Might be 17 of them, I don’t know.

Dan: By that time in the ’70s, it was Man-bat and Ra’s al Ghul were the two that were really…

Steve: Man-bat was great too, I liked Man-bat. But Penguin doing a very Penguin-y thing is part of my gestalt on the Batman, the stuff that I thought we should do. Now, a lot of these villains have been made into something. At the time, Joker and Penguin seemed to me to be essential. If I had had another four issues, I would have gone through four more villains, you know, whoever they would have been. Within the time frame, those are the guys I wanted to do. 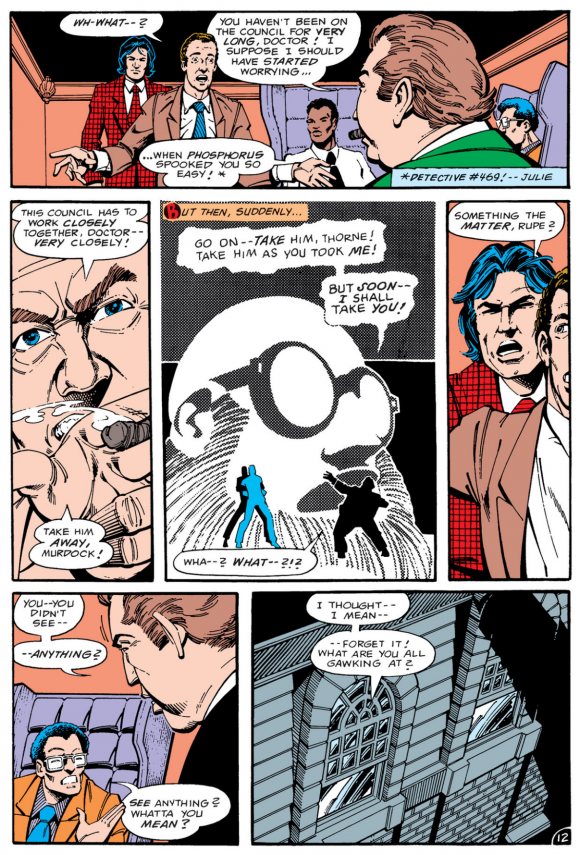 Dan: As far as the ongoing story itself, this is the first time we see Hugo Strange’s ghost. I had always assumed in reading the story that we were going to get some kind of explanation. What made you simply go, “Nah, it’s a ghost.” Was that always part of the plan?

Steve: That was part of the plan. I said where I stole the idea from. In the Dick Tracy stuff, Skinny returns as a ghost and Chester Gould didn’t bother to explain it. Although I think in the Dick Tracy thing, you could also assume that (Flattop Jr.) was just imagining it, that she wasn’t really there and it was just his guilty conscience. Which is also an explanation for this, if you want that. I just thought… I was drawing on my personal feeling for the Batman. We talked about how Silver St. Cloud got her name, the silver moon with the clouds at night. It felt right. This felt right as well.

Dan: As far as Silver in this issue, she’s only on one page. But it’s one page that really advances her particular arc. And the next issue, #474, the one with Deadshot, was unplanned, correct? It was originally a seven-issue story. How did the eighth issue come about?

Steve: Yeah, I think that opportunity arrived basically after this story. It does in real life obviously. I was still, I think, on my seven-issue schedule here. And so yes, Silver is an ongoing character so she gets a chance to advance her story, and on that one page we get a lot of stuff taken care of in terms of moving things along and what does Dick Grayson think about his buddy and all this kind of stuff. I think things hadn’t started to open up yet, this was still the schedule I was working on. Dan: There’s a lot of payoff and setup in that one page. Particularly like you mentioned Dick Grayson’s reaction to meeting her face to face.

Steve: Yeah. Yeah! Yeah, they’re all characters, they all have ongoing lives so they all react to stuff. When I was asked to come over and do what I did in The Avengers — what I did in the Avengers was everybody’s a character. The Justice League too when I did that. I don’t like to write straw characters. If the guy’s there, he’s got some reason for being there. Or the girl, whatever. Not just to fill out a page or say, “Oh yeah, we saw Robin, that’s the end of it.” If Silver’s in this book she’s going to do something.

I had the overall story pretty well worked out by this time, so I knew where the ending was going to go so I wanted to make sure we understood that she’s, like, a real character and she’s important to Batman and all this kind of stuff so that when the final issue comes, it’ll be sad. It’ll be effective. Marshall obviously got into her. She just looks cheerful and happy and like a good person here.

Dan: On the next page — and we’ve talked story mostly — but I did want to at least show off one piece of art which is just one of the best Batman and Robin panels I’ve ever seen. It sort of looks like an homage — you mentioned Infantino earlier — to his famous pinup with Murphy Anderson with the two of them on the rooftop. 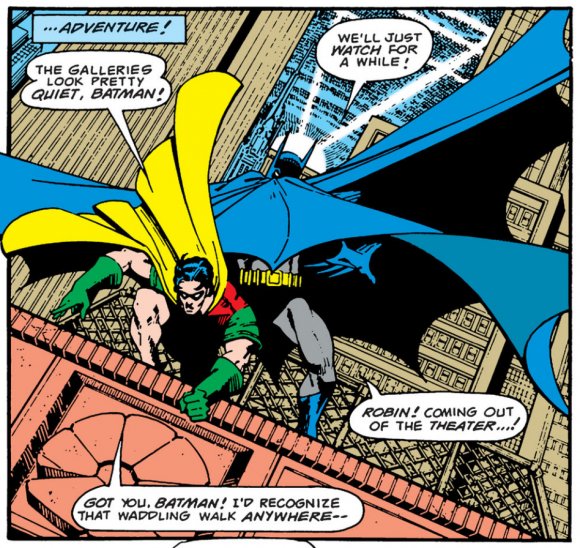 Just talk a little bit about that and seeing that kind of artwork, as a writer and as someone who also has an artistic background. How do you as the creator of the story respond when you see something that is just that outstanding?

Steve: I loved it. I told the thing about getting these books and saying “Thank you, God.” (Click here.) That’s really it. That is a wonderful piece of Batman art. In my brain, with what I was trying to do, I wanted the definitive Batman. I wanted everything that goes into the Batman. But I can’t draw it. 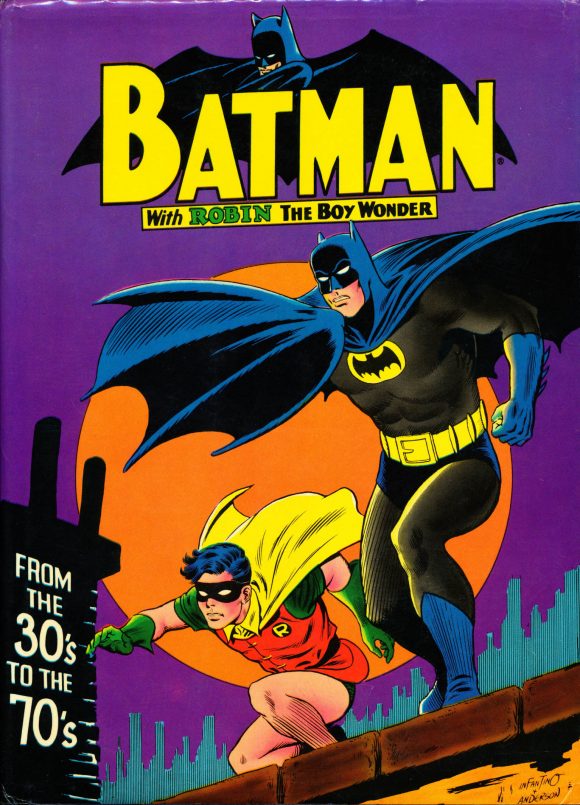 As I’ve said, the idea that Marshall and Terry were also wanting to do the definitive Batman from their particular standpoints was just a blessing. Because you don’t always get that. You can’t always rely on the guy that’s assigned to do your story being the best at it that there is.

This is Marshall. I couldn’t tell you what I said in the script exactly, but I’m sure I didn’t say “Get me a pinup.” I wouldn’t write it like that. But Marshall said, “I wanna draw this thing right here.” And that’s great! I love that stuff. Comics is a hybrid medium. Unless you’re Frank Miller or John Byrne or somebody, you’re always working with somebody and over the years I’ve worked with a lot of different people. 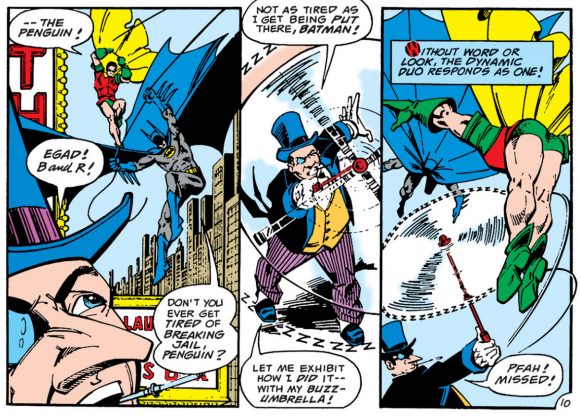 Again, I’m doing comics because I love comics. I love this, right? I mean I look at that and go, “I love this!” The fact that I asked for this sequence to happen or something, that’s got nothing to do with it. It’s just nicely drawn. It’s far more than you need to show Batman and Robin on a roof — this is Marshall just going, “Yeah, look what I can do!” Which is nice.

— PART 4: DETECTIVE COMICS #472 — The Truth Behind the Death of HUGO STRANGE. Click here.