An INSIDE LOOK at ENGLEHART AND ROGERS’ Unfinished BATMAN Trilogy

Including scripts — and never-published pencils by the late artist, who was born 70 years ago…

UPDATED 1/22/20: The late, great Marshall Rogers — one of my all-time favorite artists — was born 70 years ago. As we’ve been reporting, his seminal Detective Comics run with Steve Englehart is finally going back into print this spring. (Click here for the details.) There’s also a Detective Comics #475 Facsimile Edition — featuring The Laughing Fish! — due the same month, tying in to the Joker’s 80th anniversary. (Click here for more on that.) So it seems only fitting to re-present this piece, which first ran in slightly altered form in April 2019. Dig it. — Dan

We recently posted that, after a few twists and turns, DC would finally be putting back into print Steve Englehart and Marshall Rogers’ classic Detective Comics run from the late ’70s.

This has been a very long time coming: Only parts of the storyline have been reprinted in book form since the Strange Apparitions trade paperback went out of print nearly 20 years ago.

Anyway, with the Tales of the Batman: Steve Englehart hardcover in the offing, I got wind that the writer has posted online the original scripts for a second sequel to the run – as well as Rogers’ finished pencils for the first issue of that project. (Rogers died in 2007.) 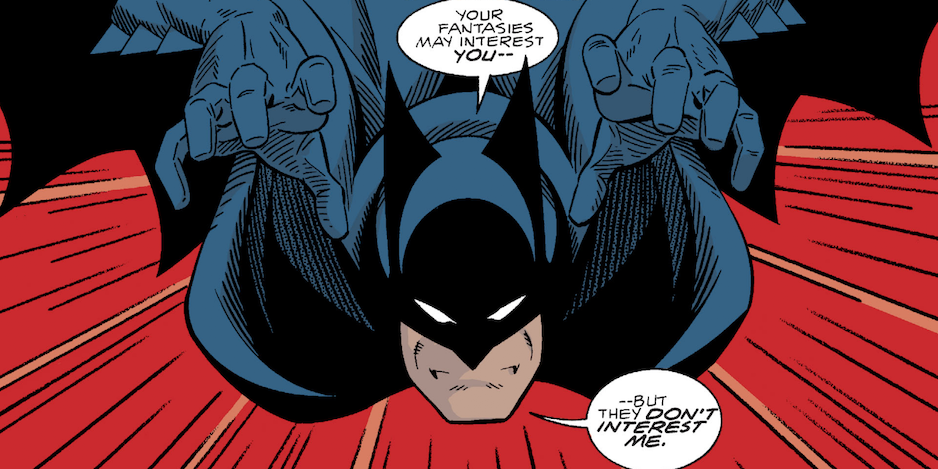 What’s there is a tremendous amount of fun but it demands a bit of back story: The original storyline has never really been given a name that’s stuck. Its first sequel, though, was called Dark Detective – the name that Englehart actually likes to use for the original run. So, in his view, what DC published in 2005 as Dark Detective is really Dark Detective II. The unfinished part of the trilogy, then, is Dark Detective III – and we get to see the Riddler, Killer Moth, Golden Age vampire Dala and much more. (Both official installments were inked by Terry Austin, of course, and he was slated for the third. Not only that, Englehart had at least two more entries in mind.)

This is Batnip for fans of what can only be considered one of the greatest and most influential Batman stories of all time. (The original was voted #3 in our recent 80th Anniversary TOP 13 BATMAN COUNTDOWN. Click here.) 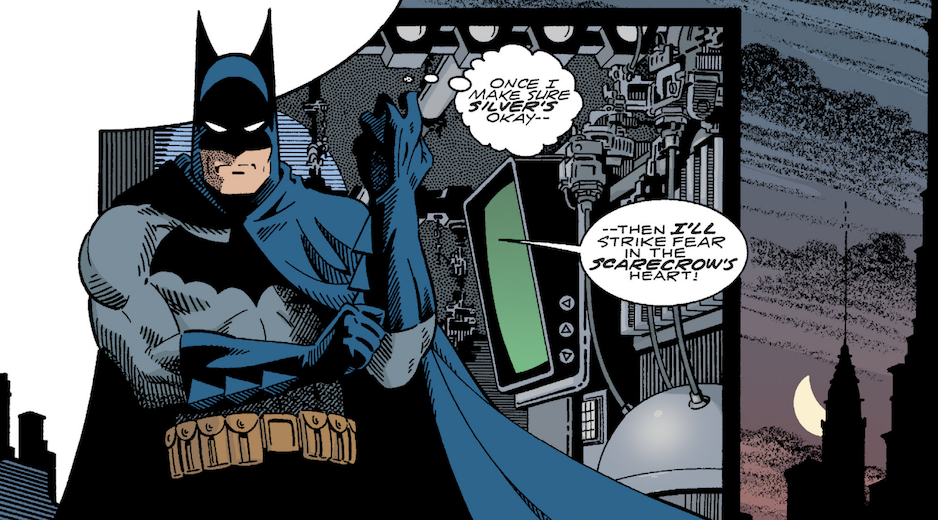 But besides soaking it all in, I wanted Englehart’s insights into the storyline’s fraught publication history — he’s long been critical of past experiences with DC — as well as his working relationship with Rogers. He readily agreed, and we’re publishing this now because it just happens to be the writer’s 72nd birthday. (He was born April 22, 1947.)

So, check out what Englehart had to say – as well as samples of Rogers’ pages and the writer’s scripts: 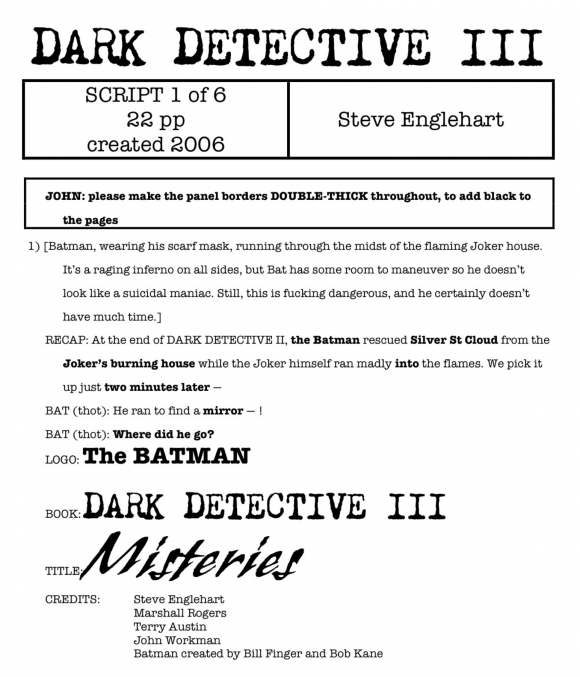 Dan Greenfield: What made you post all this now?

Steve Englehart: I was tired of waiting for DC to do it. For literally decades now, I’ve been asked at every appearance why there was no complete Batman compilation from DC — referring just to the published runs — so I decided to make one, and, while I was at it, throw in the unpublished third run. It’s free, so I’m not making a dime off it. I just wanted people to be able to see the damn thing.

Dan: Have you given any thought to re-pitching the third part with a different artist, someone who understood Marshall’s vision?

Steve: When Marshall died, at least two top guys offered to finish it out for him, but DC said no. Instead, they killed the comic run, but took the scripts and dug out things they could use in the movies, without credit or payment — their usual MO. (NOTE: Englehart has long made these claims at his website.) 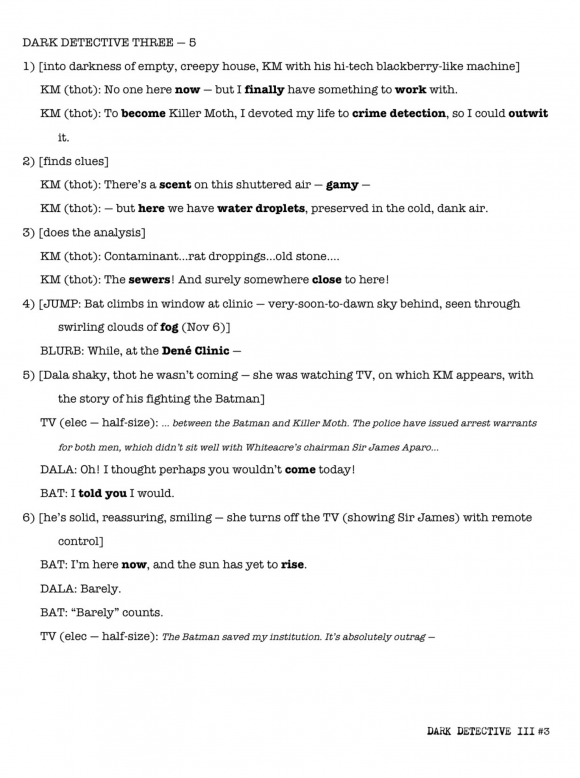 A page from Issue #3

Dan: Give us your take on how DC has chosen to reprint the stories — and what its plans are with the new edition.

Steve: Well, they’ve basically chosen not to reprint them. The Joker stories, yes. The Deadshot story, yes. But the complete runs, no. They put the first run out as Shadow of the Batman before I was brought in to help adapt that run for the Keaton-Nicholson movie. But after they changed Silver St Cloud’s name to Vicki Vale and Boss Thorne’s to Boss Grissom so they wouldn’t have to give me any credit whatsoever, they tried to bury the first run. There was one further reprint, under a name (Strange Apparitions) which was not designed to lead people to it, and then that went out of print.

Meanwhile, Marshall, Terry, and I weren’t asked to do anything more until they needed product for the Nolan films, 30 years after the first run. Lately, Legends of the Dark Knight: Marshall Rogers had Marshall’s part of the first run, but not the complete run, and it surrounded both runs with other Marshall work. 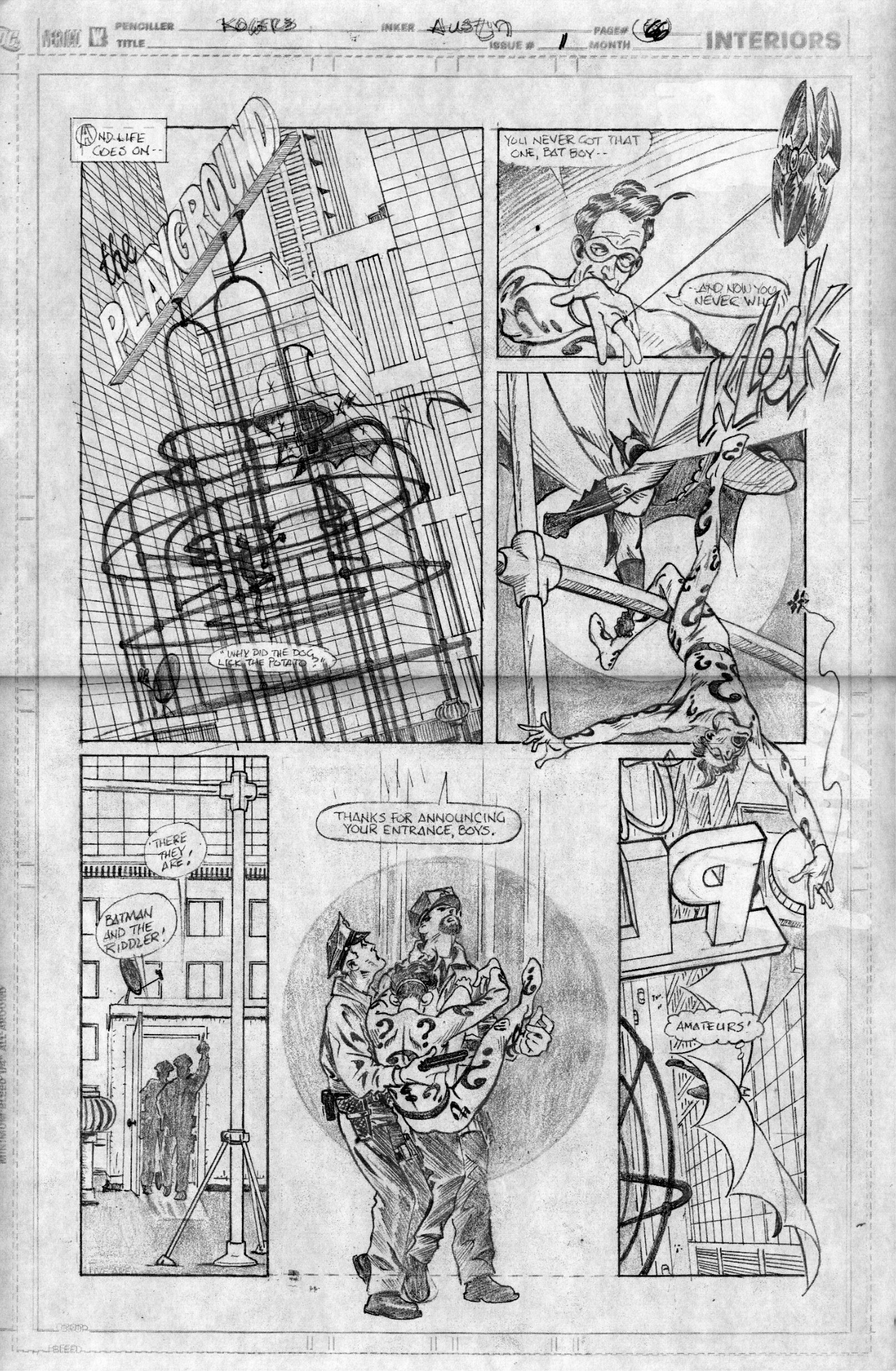 Man. Always wanted to see a Batman-Riddler showdown by Rogers…

So, I decided to put out my free bootleg with just the Englehart-Rogers-Austin runs, with a note about how DC had never done it — and amazingly, just two weeks later, DC announced their own reprint. Except, theirs is again going to surround the runs with other stories, and doesn’t have the third run. Please note, some of those other stories were written by Len Wein, and so are very good — but they don’t belong in a book called Legends of the Dark Knight: Steve Englehart. Just publish the runs as written, just once, for God’s sake.

Last year, they wanted me to write a story for Detective Comics #1000, and they wanted to pair me with Neal Adams, which sounded at first like a dream come true. Neal got me my start in this business as an artist; I have wanted to write a story for him for a very long time. But when I sat down to do it, all of the above history came flooding through me and I had to pass. I’ll do anything else with Neal, but no more Batman for DC. 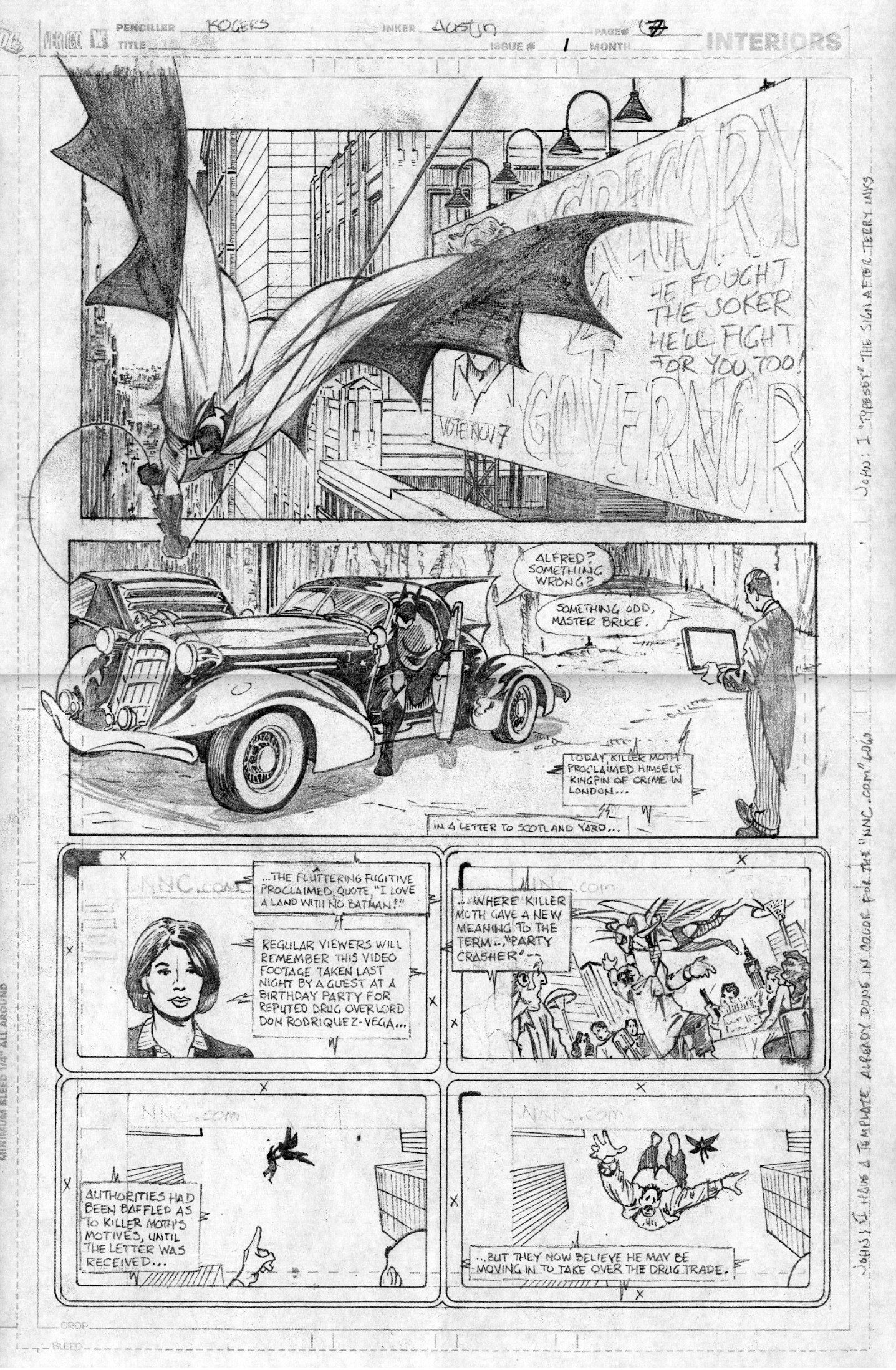 Dan: When you first sent in your scripts all those years ago, did you imagine just how important these stories would become to fans and the creators who followed?

Steve: Well, I knew at the time that the stories were very satisfying to me, and I knew that some other series I’d written had become, shall we say, “definitive,” but after Walt Simonson and Al Milgrom were let go, I figured their replacements would be journeymen, so I was not expecting the final packages to be as superbly on point as they were. I was just hoping for the best. 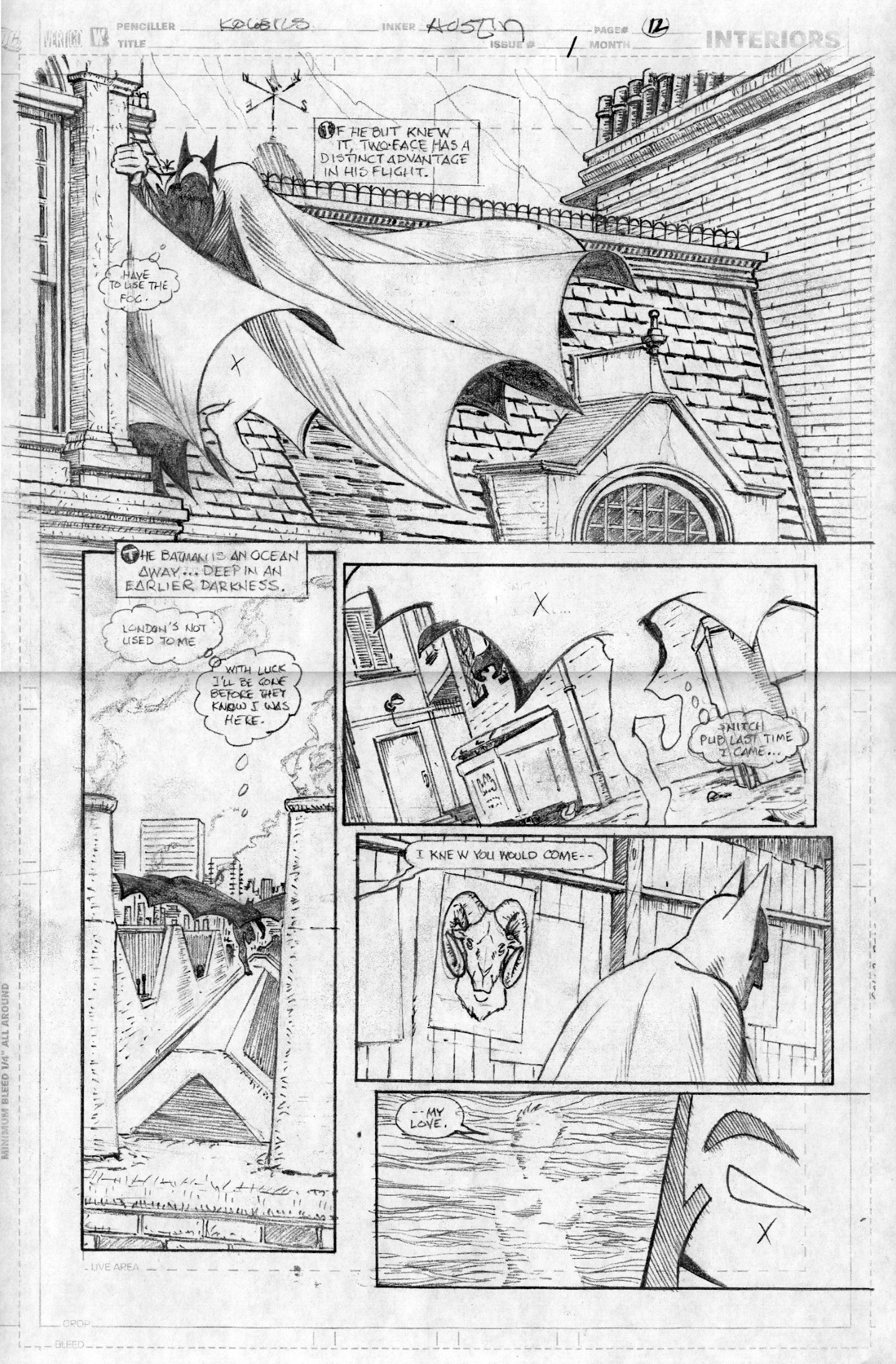 Dan: In the ’70s, as I recall, you sent in your scripts and the pages came back fully illustrated. But you worked more closely with Marshall on the follow-up series. What do you miss most about working with him?

Steve: First, a true story: after Marshall left Silver Surfer, he got married, moved to Baltimore, and left comics for video games — and after I left Silver Surfer, I started writing children’s books (since I had children) out in California. We drifted out of touch.

Fifteen years later, I was helping my sister-in-law, who lived about half an hour south of me, with some contract she had to figure out. Once we got it done, we walked into a Xerox store — and there was Marshall Rogers, as a customer. He’d adopted a son and divorced his wife, but was still a video-game guy who’d come out for Silicon Valley. So, we reconnected, and a few years later, DC asked for the second run. 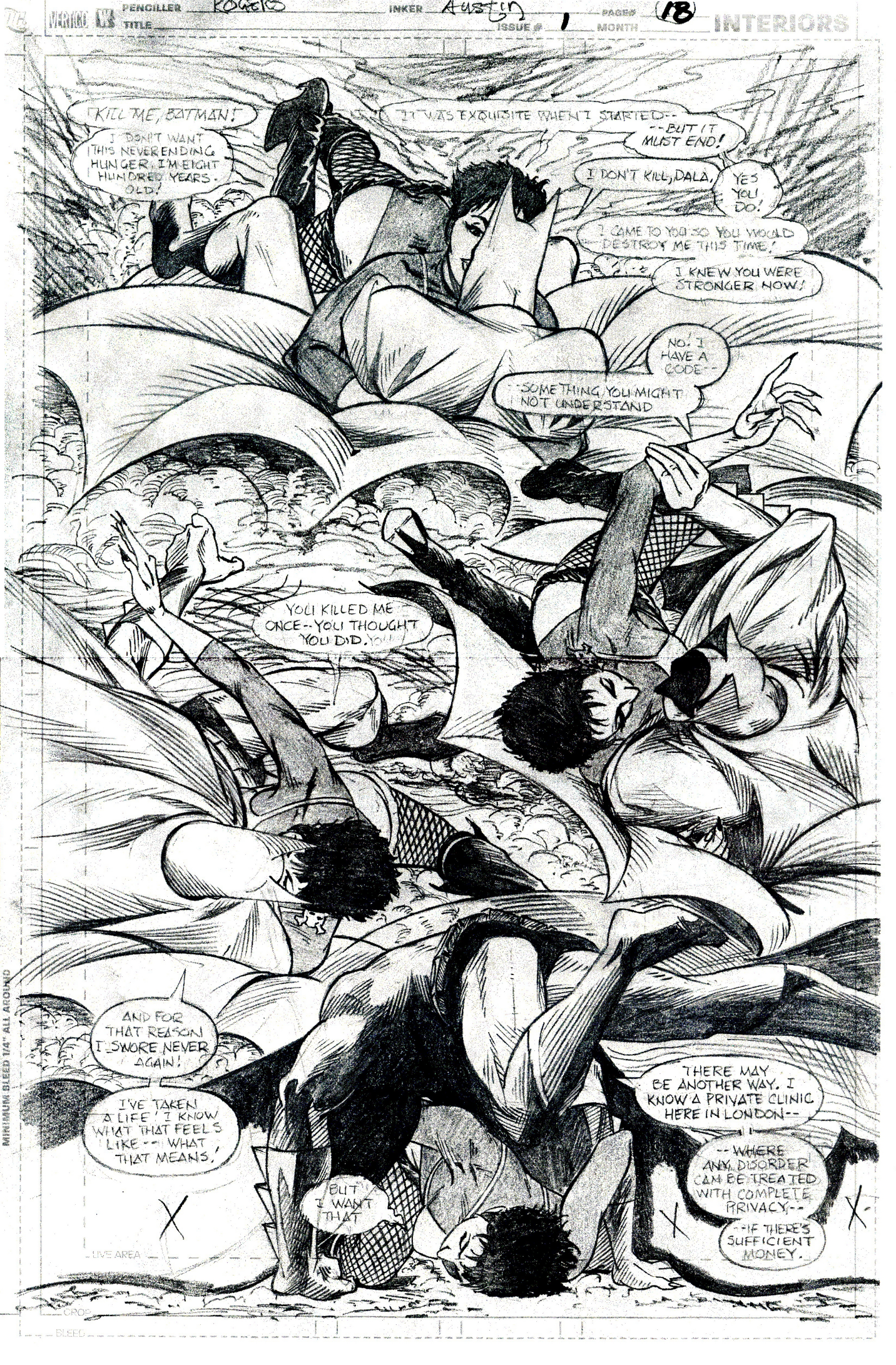 So, for that run, and the third, we would meet every week at a coffee shop — sometimes up where I lived, sometimes down where he lived — and talk about where we were going. He was as committed to getting the Batman the way he thought he should be as I was, and sometimes that meant the butting of heads — but most of the time we were on the same page, and amped by the coffee, so we probably drove the other patrons nuts. Those were great afternoons.

But it should be noted that every 20 minutes he had to go outside and smoke a cigarette. It should also be noted that he never once looked like it was affecting him. But clearly it did, and I was seriously caught off guard when comics sites started calling me one morning to ask for a comment on his death. So, I would say that what I miss most about working with him was working with him. It ended a lot sooner than either of us expected.