INSIDE THE BATMAN: The STEVE ENGLEHART INTERVIEWS explores Detective Comics #471 — when it all started to click…

UPDATED 1/22/21: The late, great Marshall Rogers — one of comics’ greatest artists — was born 71 years ago. Perfect time to re-present this segment from last year’s interview series with Steve Englehart, INSIDE THE BATMAN. Dig it. — Dan

Welcome to INSIDE THE BATMAN: THE STEVE ENGLEHART INTERVIEWS, an issue-by-issue exploration of the greatest Batman story of all time — Steve Englehart and Marshall Rogers’ seminal late ’70s Detective Comics run. The complete story has finally been collected for the first time in hardcover — and in the way Englehart envisioned it — in Tales of the Batman: Steve Englehart. With the book newly released, the time is perfect to go back and look at the story from every conceivable angle. Each weekend for the next couple of months, we’re diving into a single chapter of the 8-issue saga, with full commentary by Englehart himself — the most complete analysis of the landmark storyline ever published. For the INDEX of individual entries, click here.

So far, we’ve covered how Steve Englehart landed the gig, what he set out to accomplish, what his overarching thoughts are on Batman and the Joker, the Darknight Detective’s sex life, the change in art teams from Walt Simonson and Al Milgrom to Marshall Rogers and Terry Austin and how he structured the story. (Click here.) We’ve also explored the story’s first two issues — Detective Comics #469 (click here) and Detective #470 (click here), which gave us Silver St. Cloud, Rupert Thorne and Dr. Phosphorus.

Now the story goes into overdrive with the first appearance of Hugo Strange in almost 40 years — and the arrival of an art team for the ages. 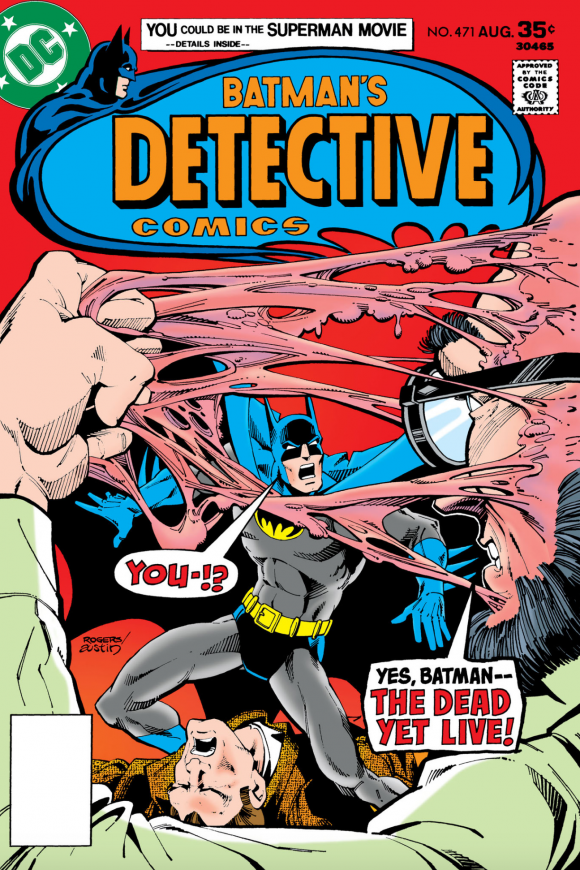 Dan Greenfield: So #471, now it’s a completely different look. Now it’s Marshall Rogers and Terry Austin, and even on the first page, the way the lettering works, the use of sound effects, the pen and pencil lines — it’s all very different and it’s all really striking. Before we get into that, were you familiar with Marshall Rogers’ work on the Calculator backup stories in Detective that came before that? Were you aware of his work at all?

Steve Englehart: It’s pretty early Marshall Rogers. It’s not the greatest Marshall Rogers art ever. This is where 45 years comes into play — I don’t know that I knew about Marshall and Terry until I saw the printed issues, six months after I went to Europe. I just started turning out the scripts in advance because I had to get five more issues done before I went to Europe.

And then, as we will see, (editor) Julie Schwartz said well, these first issues sold so well, we’re going to add an extra issue in the summer. So, all of a sudden I had eight (issues instead of seven). That actually was very cool, and I’ll talk about that when we get to that segment. 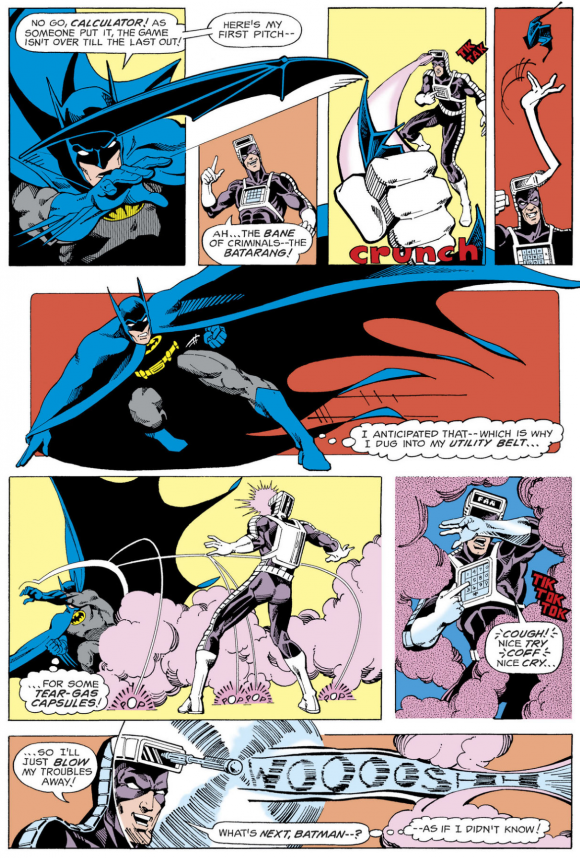 Detective #468: Batman vs. the Calculator. Written by Bob Rozakis. Art by Rogers and Austin.

I had a certain number of things to do. I was still writing the Justice League too. So, I had to do all this stuff before I got out of town. I started writing the scripts and I really don’t think that I knew who was going to draw these things at all. We were still sort of waiting for the last of the Walt Simonson issues to come in, so I just started writing ahead. I hadn’t done scripts in advance for a number of years. I used to do it on Vampirella back in the day. At Marvel I never did.

Even then, I’m sure if you’d asked me, I would have said I prefer Marvel style, I preferred to let the artist have his thing. But — couldn’t do it. So, I had to write script in advance and I will say that Marshall told me in later years, he loved script in advance. He would prefer to work script in advance. Once again, everything kind of lined up for this to happen. 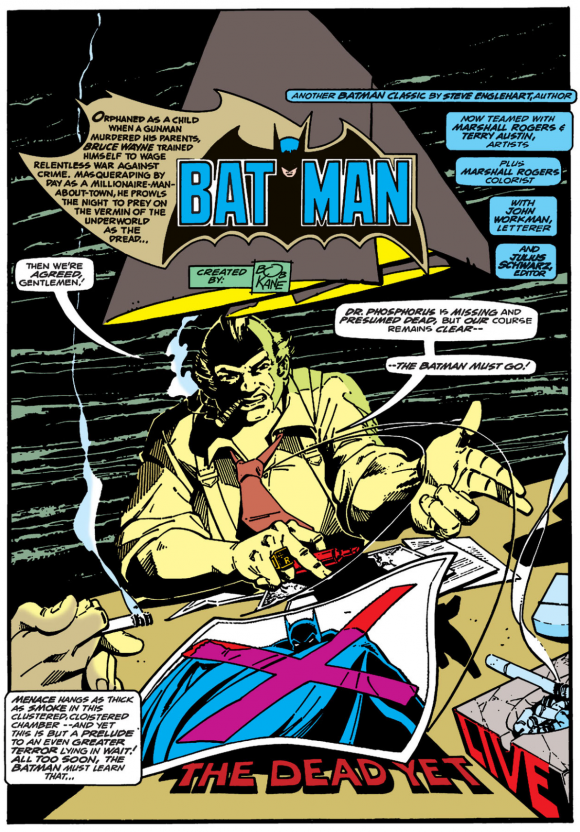 It was now when I was thinking to myself, “OK, I’ve got five more issues. I’m not going to be, like, working this out over the next 10 months while stuff gets done. No, I’m going to have to work it out.” So, I’m sure it was now that I sat down and said “OK, how’s this all going to fit together?” I like to leave myself with as much room as possible, but I also can’t just get to the end of my run and say, “Oh, I forgot to solve that problem.” Nope, I’ve got to make sure that this is all going to come together right.

You can immediately see, I can see, there’s more panels per page. I’m telling a more complex story than when Walt was taking my ideas and breaking them into enough pictures to make that story work. Now I can sort of start doing suspense, and I can start doing things like gravel falling down the chimney and stuff. I’ve got time to do those panels that aren’t just moving everything forward, forward, forward all the time. 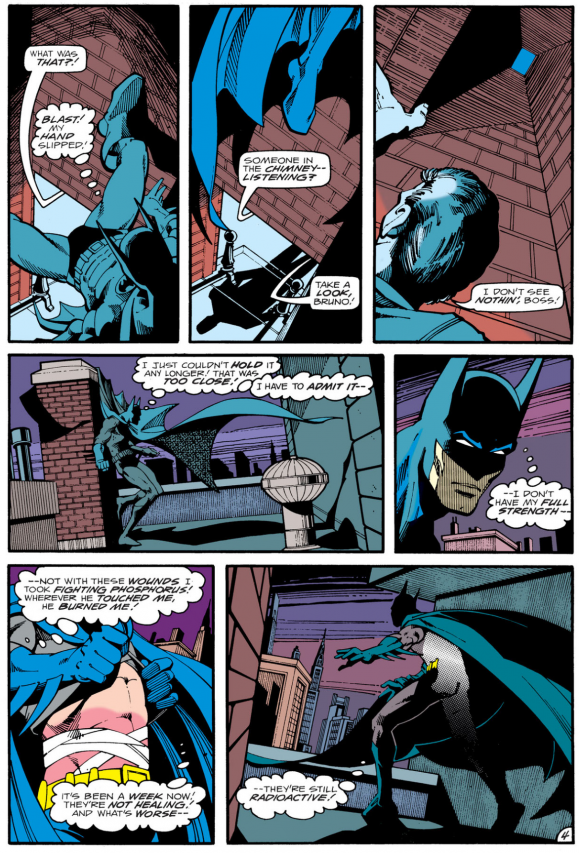 So I started doing more panels. I try as a general rule to stay with six panels a page, which is even old school. A lot of times I’ll do five. I’m not likely to be doing a lot of stories with only two panels per page, or one. I believe in story, I want to tell a story so I’ve got to have enough room to do that. Five, six is kind of the general rule, I can see that I was doing seven and eight, a lot here in this time.

Anyway, so we pick up on Batman and how Dr. Phosphorus had given him radiation poisoning, so that led him to Hugo Strange’s clinic. We also get to see Silver St. Cloud in bed in a negligee at this time. I didn’t know what the panel was going to look like exactly — I’m sure I said I want to indicate that they had sex. Every artist would interpret that his own way. Marshall interpreted it this way, and he was right. That was the great thing. Marshall and I, and Terry, and even (letterer) John Workman when I talked to him, we were all huge Batman fans and every one of us was like, “I’m going to do the best Batman I can do because I love this character.” 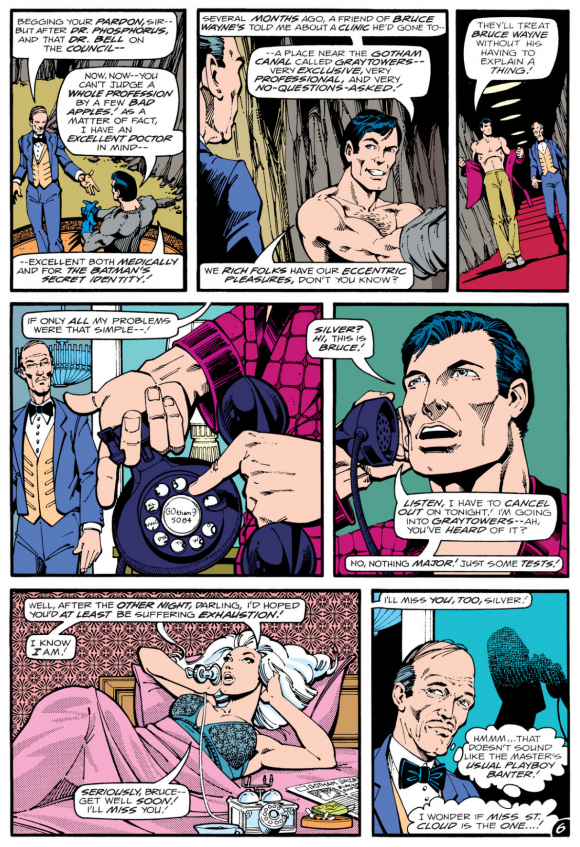 I would also say however, and I’ve told this story a bunch of times but whatever: Terry often tells me that he and Marshall were getting yelled at every month about this artwork. That this was not DC artwork, this was not the way — I mean these are the guys who redrew Jack Kirby’s faces!

Marshall and Terry would draw this, and they’d go in and (managing editor) Joe Orlando would yell at them and say, “This is terrible! This is not what we want!” But the cool thing about it is that they didn’t change. Marshall, you can see, gets better issue by issue. You could see that a lot.

I remember when I did The Avengers with George Perez, you could see George Perez get better every issue. Guys who want to get better, they’re going to get better visibly. That’s kind of cool. This early stuff is kind of more like the Calculator art, but it’s improving rapidly and really moving right along.

So, we get Batman trapped. Of course, he gets out, because he is Batman. I’m just flipping through it… 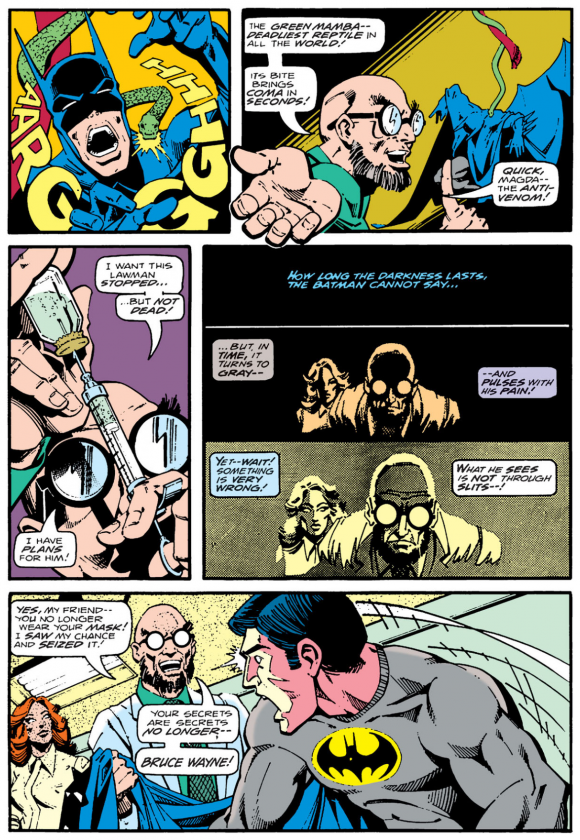 Dan: They finally captured him in the end and we find out that he’s been unmasked.

Steve: Yeah. You get Hugo Strange in a modern era doing something that you would do in a modern era, but definitely everything that he’s doing is coming from the pulp 1940s thing. The mixture of the two, bring back the pulp stuff, but set it in the current day, that was the deal. 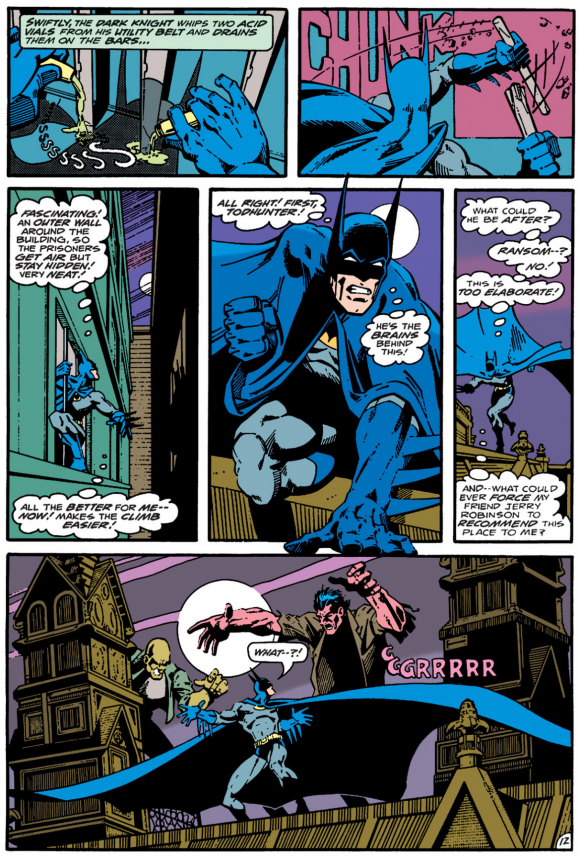 Dan: The first time you saw these pages, what was your reaction?

Steve: Oh, I was ecstatic. At that point, we were spending the winter in Majorca, in 1977, I guess. We had made that trip to Europe. … My wife and I both speak Spanish, we would go down and teach English to the little kids at the school. We were part of the village. One day … I got a package from Julie Schwartz and it had all the remaining Batman issues in it.

Dan: All of them?

Steve: All of them. I didn’t see any of the Marshall Rogers and Terry Austin stuff until I saw all of it. I very literally… I believe personally in the unity of the universe, but not an old man with a beard. But I cast my eyes heavenward and said, “Thank you, God,” when I saw this stuff. It was like, what a nice surprise, that it came out as good as it did. I didn’t know who was going to draw it, and there was nobody good left at DC. It was probably going to be Joe Journeyman and (inker) Vinny Colletta. Or something. There weren’t famous artists hanging around DC in those days.

The odds that Marshall and Terry would show up and become famous artists — that was unexpected. Then I read all the issues just boom, boom, boom, and just saw how they had caught what I was trying to do. And every once in a while — Marshall said the reason he liked to work from a full script was because he likes to know exactly what’s supposed to happen — but then he will sometimes noodle around on the edges. That’s what he did. There are things where he, most famously for me, the way he drew that scene in the last issue where Batman and Silver are breaking up and the way he moved the panels around and did all that stuff. That’s my dialogue, but the way the panels break down, that’s Marshall figuring out how to enhance that. 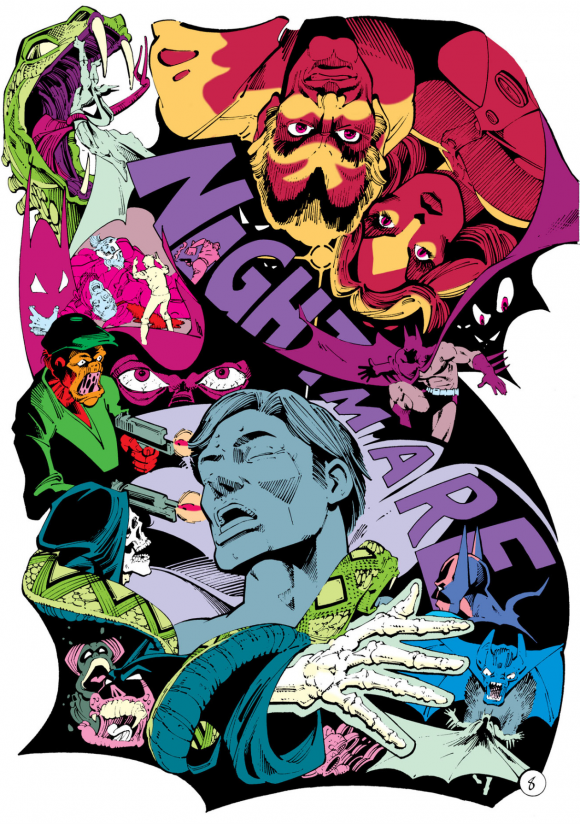 Dan: That goes to the heart of a question that I have: In Issue #471, there’s the scene of Batman having his nightmare when he’s been drugged. It’s a full page, a splash page. Given the way you had written it, how much detail did you put in the description and how much of it was just Rogers riffing?

Steve: It’s him, pretty much. I’m sure I’d asked for a full page, and I’m sure I just said, “He’s having terrible nightmares.” It’s just like, you know, figure out what would give Batman nightmares. So you’ve got Joe Chill, except Joe Chill looks like a monster. You’ve got some weird sort of bat thing with eyes over in the corner.