INSIDE THE BATMAN: The STEVE ENGLEHART INTERVIEWS tackles Detective Comics #470 — and the introduction of one of Bruce Wayne’s greatest loves…

Welcome to INSIDE THE BATMAN: THE STEVE ENGLEHART INTERVIEWS, an issue-by-issue exploration of the greatest Batman story of all time — Steve Englehart and Marshall Rogers’ seminal late ’70s Detective Comics run. The complete story has finally been collected for the first time in hardcover — and in the way Englehart envisioned it — in Tales of the Batman: Steve Englehart. With the book newly released, the time is perfect to go back and look at the story from every conceivable angle. Each weekend for the next couple of months, we’re diving into a single chapter of the 8-issue saga, with full commentary by Englehart himself — the most complete analysis of the landmark storyline ever published. For the INDEX of individual entries, click here.

So far, we’ve covered how Steve Englehart landed the gig, what he set out to accomplish, what his overarching thoughts are on Batman and the Joker, the change in art teams from Walt Simonson and Al Milgrom to Marshall Rogers and Terry Austin and how he structured the story. (Click here.) We’ve also explored the story’s first issue — Detective Comics #469, with art by Simonson and Milgrom — which gives us a lot of set-up. (Click here.)

Now we move into March 1977’s Detective Comics #470, featuring the final showdown with Dr. Phosphorus at the harbor power plant, more with Rupert Thorne and the City Council’s move to shut Batman down, the last contributions of the Simonson-Milgrom team — and the introduction of Silver St. Cloud, a woman in whom Bruce Wayne met his match… 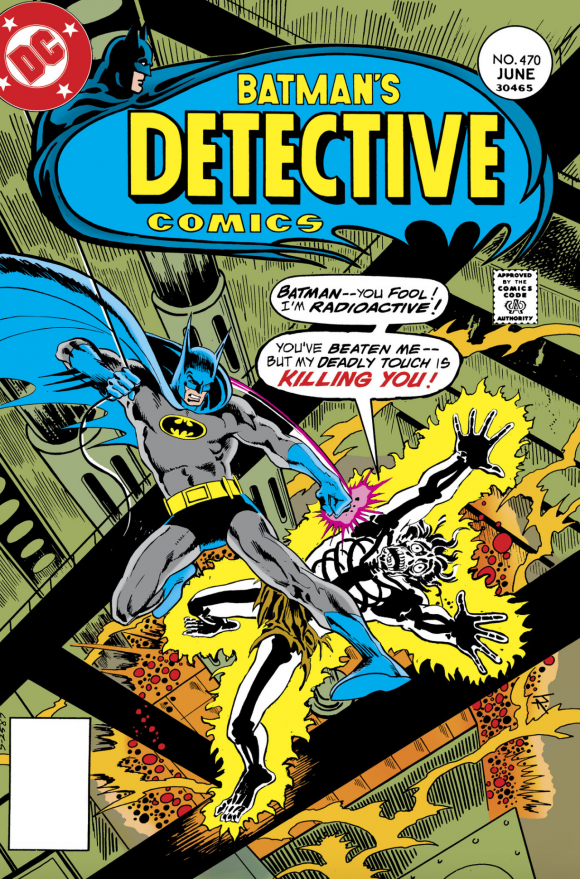 Dan Greenfield: This is where Silver St. Cloud comes in about halfway through the issue. Obviously, you had thought about her before; we talked about you wanting to give Batman a sex life. Tell me a little bit about the inspiration for her beyond just the concept of wanting to have a girlfriend for Bruce Wayne, because he’d had plenty in his history. You decided to create someone new and someone who was a little bit different from what we’d seen before. Was she based on anybody specifically? I love the name alone, it’s a great name. Tell me more about how she was developed.

Steve Englehart: Alright, I thought about Bruce Wayne as the millionaire playboy who runs this vast enterprise AND is Batman in his spare time. I thought, if he’s going to have a girlfriend, then she’s got to be a strong woman. She’s got to be somebody who can live with somebody like that, and not stupid because he’s not going to date bimbos. He doesn’t have enough time to be like, dating bimbos. So she’s got to be somebody legit. I didn’t think at the beginning necessarily that she would figure out who he was, although I liked that bit when I got to that later. She was going to be the definitive girlfriend. I never thought much of any of the, quote unquote “girlfriends” that he’d had before. Vicki Vale and there was the one in the ’40s that he had, I forget her name right now. 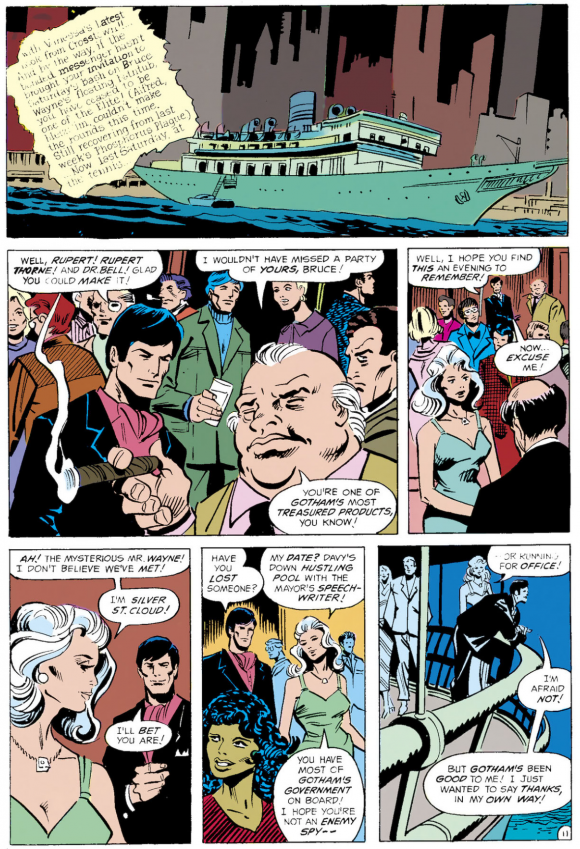 Silver St. Cloud, the name, it comes from sort of silver clouds in front of the moon. I was trying to think of a Batman kind of vibe if I’m going to name her and she’s going to be the girlfriend for the next 50 years, which didn’t happen, then… So silver, clouds, moon, it all sounded very Batman-like, without naming her Jane McCowlface or something. It had the right vibe. So there she was. The fact then that she worked, she was involved with the city government and so forth… You try to tie stuff together. 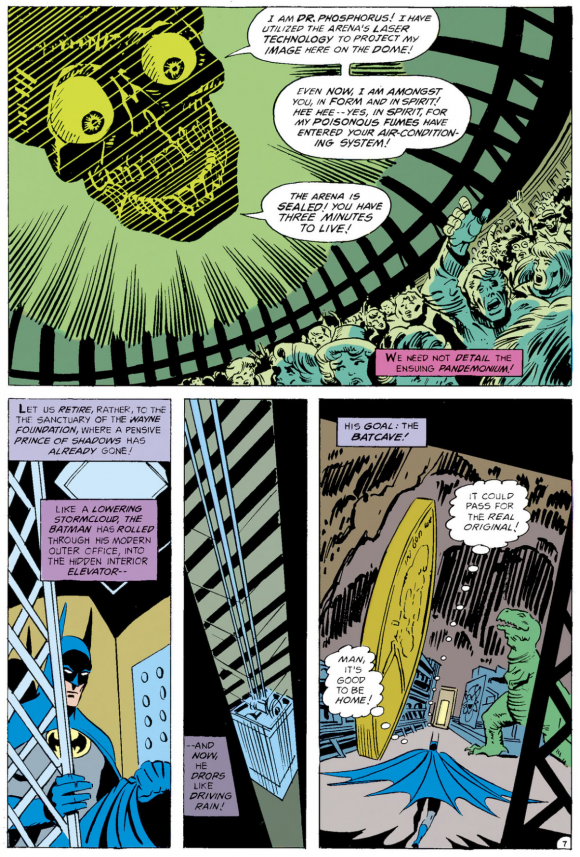 Dan: From an aesthetic standpoint, a number of years earlier Bruce Wayne moved into the middle of Gotham and Dick Grayson moved to Hudson University. That was the status quo when you were writing your story. He used the Wayne Foundation building as his headquarters, but my understanding and my recollection is that in the second issue — were you the one who decided to actually make it a full-on Batcave beneath the Wayne Foundation building?

Steve: I think so. I mean, I think so. If you were to show me that somebody else came up with that idea it wouldn’t astound me but I wanted a Batcave and he wasn’t hanging out at Wayne Mansion anymore. I’m sure Gotham just has caves underneath it, all over the place, what the hell. We’ll go find one! 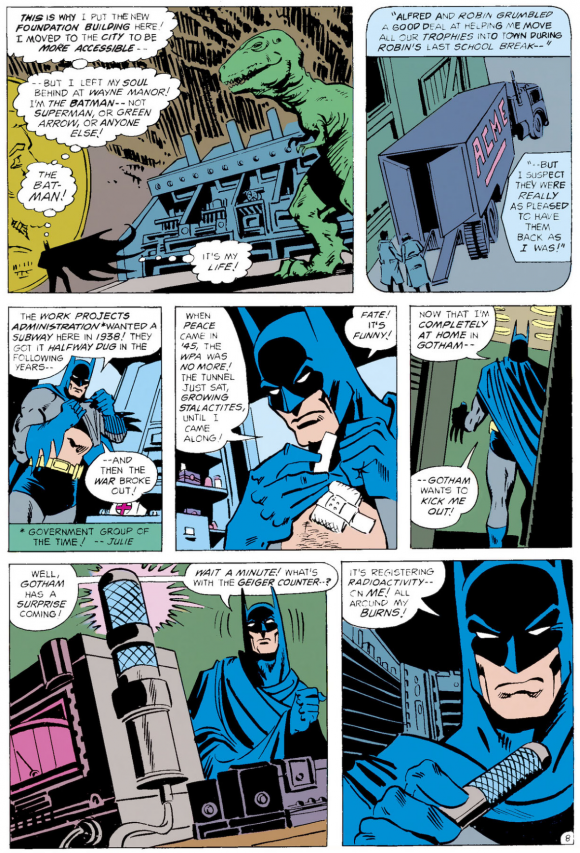 I think I would have liked him back at the mansion. That would have been even more traditional Batman, but that wasn’t the way it was. I was in there to like, renovate the character, but I wasn’t there to like… I’m not one of those guys who comes in and goes “Well, now I’m here, so everything is different.” No, as a fan I want to see, I’ve been following this story and I’d like to continue to follow this story. If I took over any series and I wanted it to be someplace else, I would show you the journey of how we got there. I mean that’s the story, right? Why should I not do that? So, I wasn’t going to move him in seven issues, I wasn’t going to commit and move him out of this strange-looking skyscraper with the tree in the middle and all that.

Steve: But I needed a Batcave. Got to have a Batcave for Batman.

Dan: One more about this issue before we move on to the next one, where obviously things change drastically in terms of the art. The lettering in the first two issues was by Ben Oda and John Workman did the rest. The lettering in both cases has a distinct Golden Age feel. Was this something that you had asked for as part of the aesthetic of the book? Because you were obviously so into that whole pulpy darker Golden Age kind of — I don’t want to sound pretentious and say milieu — but you know what I’m driving at. Was that just simply the luck of the draw or was it something you actually suggested? 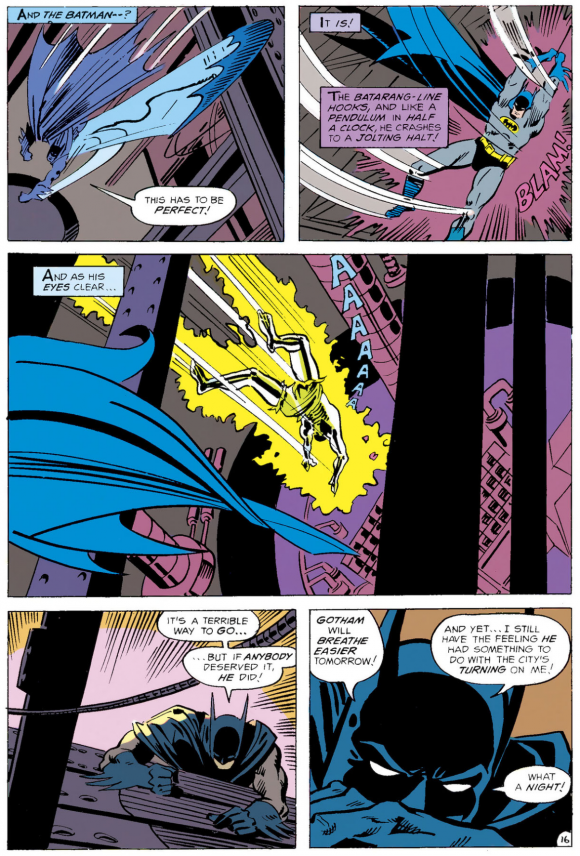 Steve: No, that was the luck of the draw. I’m looking at the issues. One thing I’ve said a lot and we’ll get to it in a second, is that because the ’40s stuff was so dark, I had asked Terry Austin to put — or I had asked the inker; I didn’t even know it was going to be Terry Austin — but when they shifted things, I put in the script that I would like them to do as much black as possible and even to make the panel borders thicker so there would be more black.

I’m looking at the Walt Simonson stuff here, and that’s not happening so obviously I hadn’t thought of that yet. It was not within the realm of possibility for me to walk into (editor) Julie Schwartz’s office and say “get me different artists” or “get me a particular inker” or “particular letterer” or whatever. That was all Julie’s bailiwick. He decided who was going to do that stuff. I’m just a cog in the machine. I’m kind of a big cog because of why I was there, but I was still part of the machine.

So no, Ben Oda and then John Workman, that was just the way Julie set it up. Unless, I mean it’s possible that Marshall or Terry might have asked for them, but I didn’t.

(An aside:) I’m just kind of looking at the second issue to see if there’s anything else worth noting — we’re just sort of following, we’ve got Chief O’Hara in here… 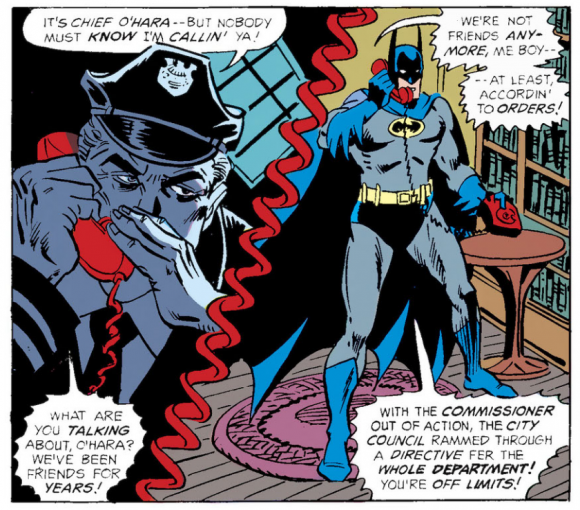 Dan: Yeah, when I reread it for this interview, I was like “Oh my God, he brought in Chief O’Hara, what an interesting Easter egg right there.” Because he wasn’t really considered part of the Batman world in the comics.

Steve: Well, you know I just was like, anything that might be cool for Batman, I wanted to try to do that within the limits of it.

So then we get Bruce Wayne on this yacht with the city government, and then we meet Silver St. Cloud. Except for the fact that her hair is white, I don’t, I mean you know, what else would I say — she’s pretty. But I didn’t describe her beyond that. But the white hair, again silver, moonlight, not white but platinum blonde or whatever it might be. But the name Silver definitely led to her hair color. 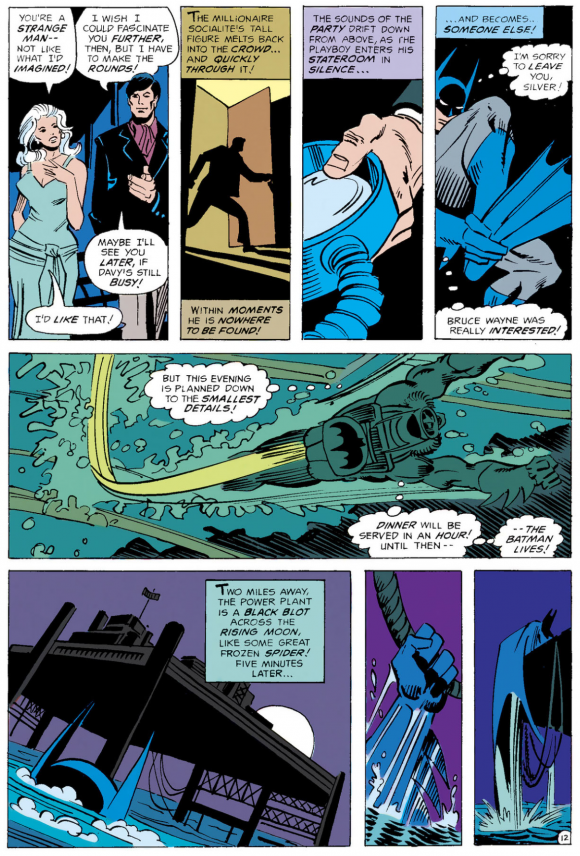 Dan: I always assumed that was your choice because of her name.

Steve: And so then we get the final battle with Dr. Phosphorus. But right at the end we get the little clue that she’s not dumb. She runs her hand through Bruce Wayne’s hair and it’s wet, and like, why would that be? She was, you know — and I’m sure that that’s me getting to the end of the issue and going, “That could happen, and if it did, then that would point her at this particular direction.” You know I mean there’s only so many times I can keep circling back to that. That’s how I do stuff. I would bet you, and there’s no way to determine at this point, but I would bet you that when I was first thinking of introducing her, I was just going to introduce her. 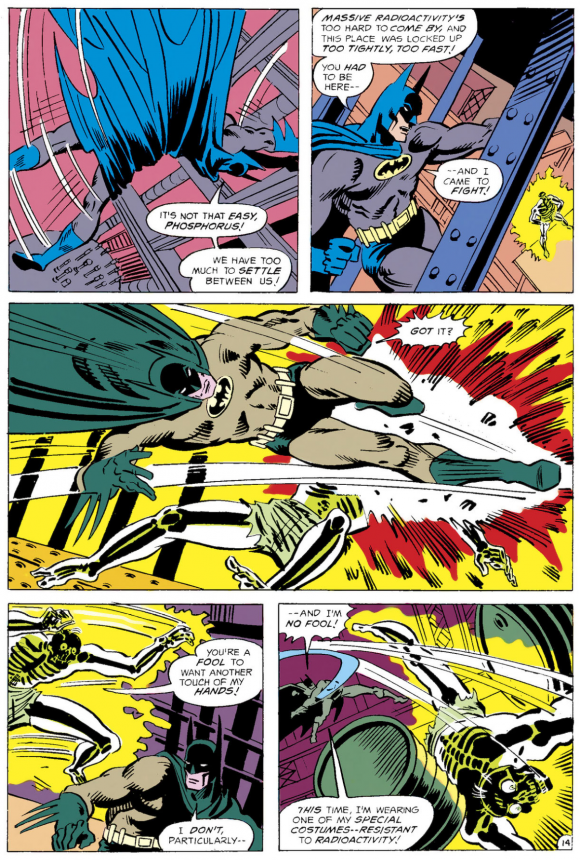 She was going to be his girlfriend and she would certainly get involved with his life. I would bet you that at this point in time I hadn’t really thought about exactly how it was going to go. I did that all the time, where I would go, “But that would be really cool, if she had a suspicion. And so, I don’t know what she’s going to figure out, I don’t know where it’s going to go, but that would be a cool way to end that issue. So that’s what I did.” 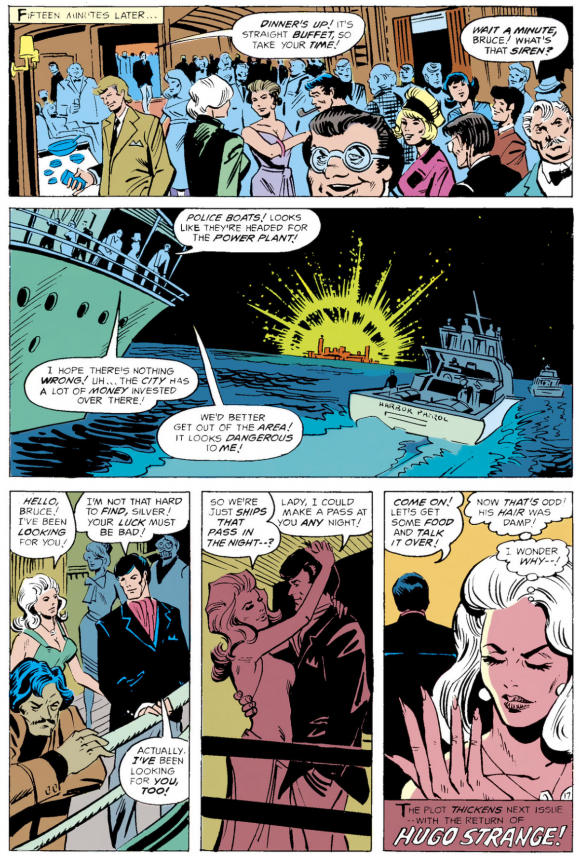 NEXT: PART 3, DETECTIVE COMICS #471 — The Arrival of ROGERS and AUSTIN and the Return of HUGO STRANGE. Click here.