This week for RETRO HOT PICKS, Scott Tipton and I are joined by Chris Franklin in selecting comics that came out the week of June 16, 1981. Why that year? Because Superman II came out 40 years ago! Why is Chris the guest? Because he co-hosts with Rob Kelly the superb Superman Movie Minute podcast! (Click here to check it out.)

So, in addition to picking the week’s comics, we’re also sharing our memories of Superman II, one of the greatest adventure sequels of all time. (Feel free to share your own memories in the comments!)

(Keep in mind that comics came out on multiple days back then — as has become the case now. So these are technically the comics that went on sale between June 13 and June 19.) 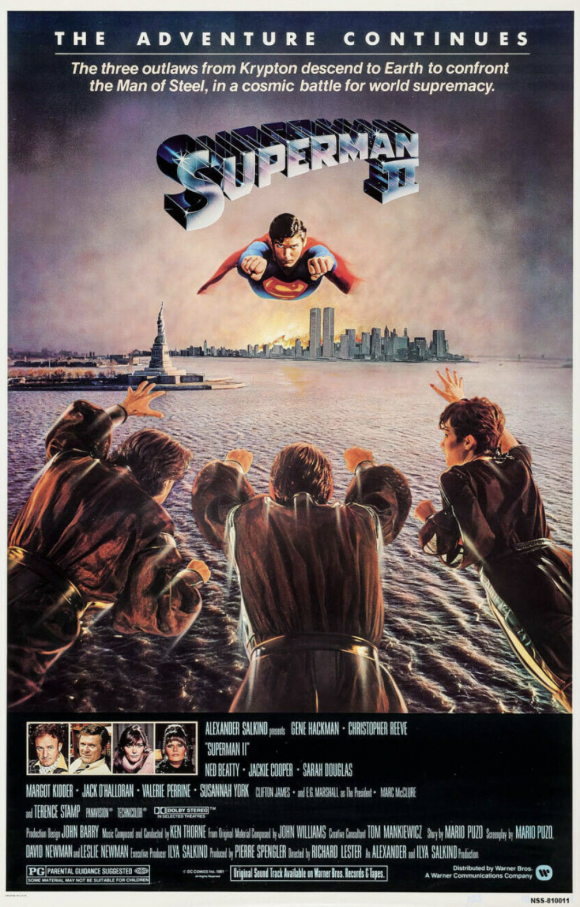 Let’s the scene: Ronald Reagan was president — and E.G. Marshall played an unnamed version of him in the movie. At the box office (obviously) Superman II was released in the U.S. on June 19. At the time, its $14.1 million take was the highest weekend debut ever, topping the $11.9 million mark set by Star Trek: The Motion Picture. The film hit the U.S. more than two months after its U.K. debut. (It premiered in Australia the previous December.) Quick aside: Superman II replaced Raiders of the Lost Ark — which came out the week before — at No. 1. Raiders would later reclaim the top spot.

Superman II. It’s the question that has perplexed man for 40 years: Which is better: Superman: The Movie or Superman II? While 6-year-old me walked out of the theater in the summer of 1981 convinced that the sequel was the superior film, since my teen years, I will always say Superman: The Movie. Director Richard Donner’s insistence on (say it with me) verisimilitude gave the first film a sense of grandeur missing from the sequel, credited only to his replacement Richard Lester (although Donner did direct a good chunk of the film as originally released as well). But what Superman II lacked in cinematic opulence, it made up for with whiz-bang action, and one of the greatest scenery-chewing villains of all time in Terrence Stamp’s General Zod.

When Rob Kelly and I covered the film five minutes at a time on our Superman Movie Minute podcast, I posited that if the film were released today, Superman’s careless decision to give up his powers just to get his super-freak on would crack the internet in half, faster than Henry Cavill could snap a neck. But 1981 was a much simpler time, and fans and audiences could more easily roll with such questionable character inconsistencies. This movie is just a lot of FUN. The triumphant moment when Superman asks “General! Would you care to step outside?” is a fist-pumper to this day, like the 1980s precursor to Captain America catching Mjolnir in Avengers: Endgame.

Reeve, the epitome of all things Superman for this fan, is at the top of his game, and his supporting cast rises with him. Sure, it’s easy to look at the film today and say “Donner shot. Lester Shot. Donner shot…” just from Margot Kidder’s hair style and the lack of Gene Hackman on screen, but somehow, it all works. What a great movie!

All-Star Squadron #1, DC. Roy Thomas’ defection to DC after a decade and a half at Marvel was in full swing this month, with Thomas launching the DC book he is undoubtedly most associated with, All-Star Squadron. Perhaps the most perfect project for the continuity- and history-obsessed writer, All-Star (let’s not use the acronym) allowed Thomas to play with his beloved Justice Society of America, and all the toys DC owned from the 1940s. Stalwart artist Rich Buckler was on hand to launch the book, along with a then-unknown inker named Jerry Ordway, who would soon become the primary artistic influence on the series, and the JSA in general for some time. Starting things off on the eve of the Japanese attack on Pearl Harbor and the disappearance of the JSA was a masterstroke. I was hooked, and would follow the series (newsstand availability aside) till the end. I even learned a lot of real-world history along the way! 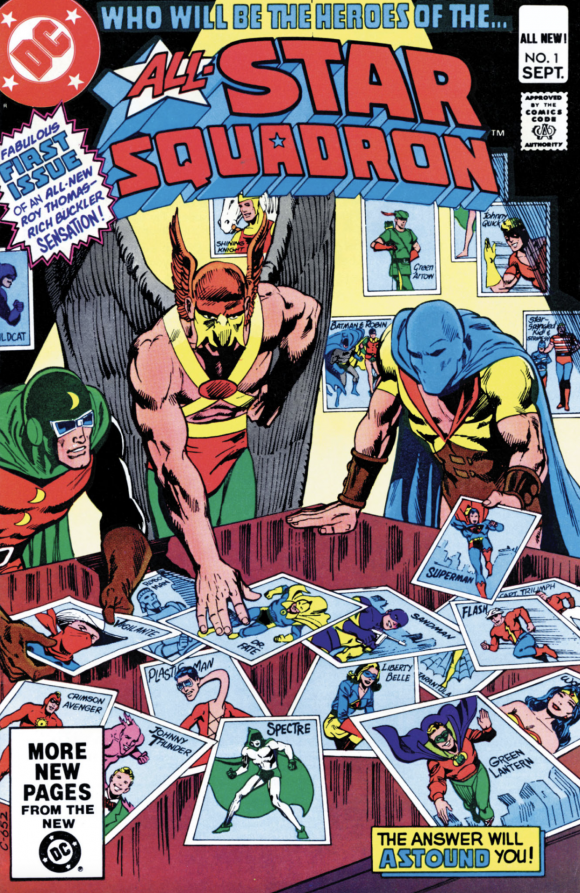 Dan adds: Roy Thomas joins DC and brings a new angle on the Justice Society with him. I’ve found that whenever I write about All-Star Squadron, readers go bananas. And while I was a big proponent of Crisis on Infinite Earths years later, it’s fine titles like this that took the hit. Dig that Rich Buckler/Dick Giordano cover, though. A classic.

World’s Finest #271, DC. Not content to explore just the history of Earth-Two this month, Thomas and Buckler teamed up for World’s Finest Comics #271, the 200th anniversary issue since the book began running Superman and Batman team-up stories (minus those entries in the ’70s when Batman vacated to make room for random guest stars). Thomas took on the Herculean task of making all the various “origins” of the Superman/Batman team published over the years work together, even incorporating their first actual story meeting from the 1940s Superman radio show, and making that the official Earth-Two version. All the continuity flashbacks in this one helped make me the comics history nerd I am today. And who could resist that George Perez cover of the World’s Finest team (including Robin) bursting through milestone covers of their historic first meetings? 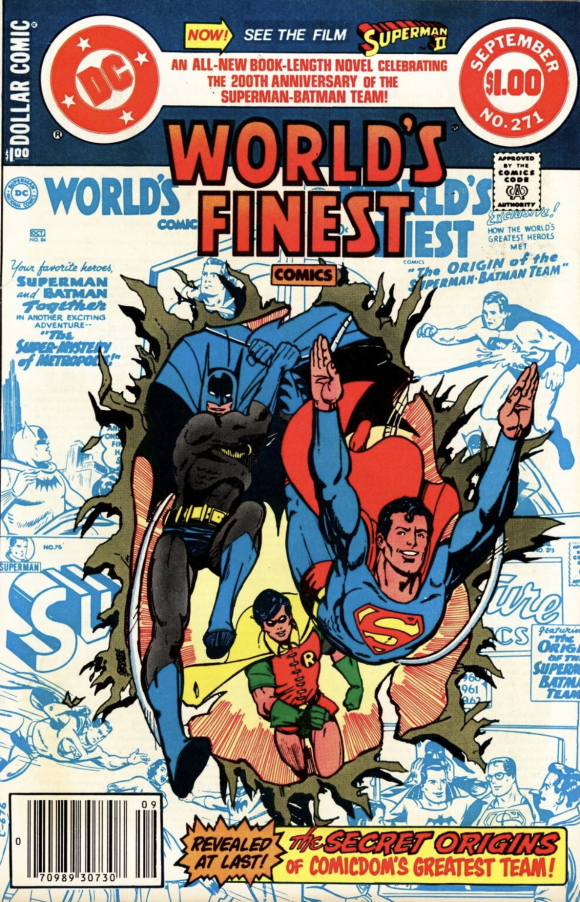 Dan adds: I was an on-and-off reader of WF but I grabbed this special issue. Love that Perez cover!

DC Special Series #25: Superman II Collector’s Album, DC. Two Superman treasuries in one week? Yes, please! This one was a must-buy. I didn’t know at the time DC couldn’t adapt the film stories of the first two Superman movies into comics without going bankrupt paying Mario Puzo (the original screenwriter for both films), but I didn’t care. I had missed out on the treasury special from the first film, but this one was right in front of me at Eastside Pharmacy, and I couldn’t pass it up. Filled with interviews and articles about the film, it still managed to tell the basic story of the movie through exciting photos taken from the movie. (Don’t tell Puzo.) The inside front and back covers juxtaposed stills from the film with similar scenes from 40 years of comics, a visual treat I remember staring at for hours and hours. Older fans may have stared for hours and hours at the rather revealing photos of Sarah (Ursa) Douglas in the book. Six-year old me was left wondering if he should be reading this. But read it I did, until it literally fell apart! 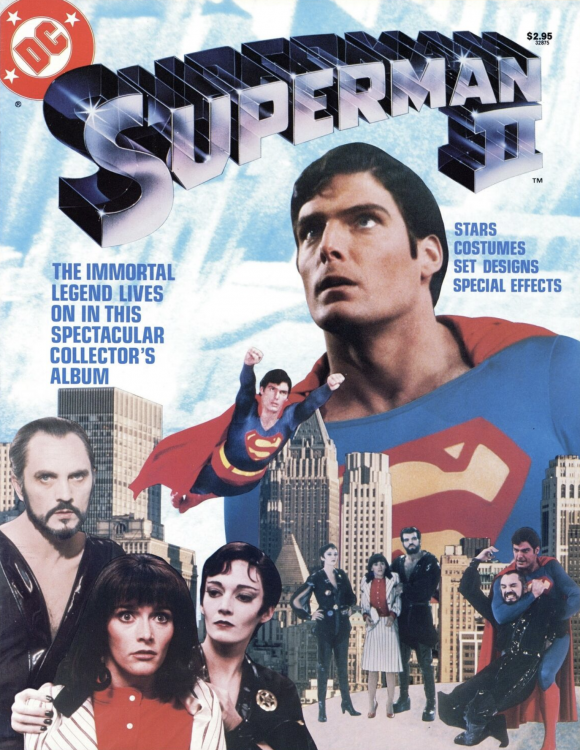 Dan adds: Like Chris, I wasn’t aware that DC couldn’t do an adaptation — and was disappointed that there wasn’t one. But also like Chris, I loved this treasury madly. (Quick note: Rest in peace, Ned Beatty.)

DC Special Series #26: Superman and His Incredible Fortress of Solitude, DC. Roy Thomas, AGAIN? Yes, Rascally Roy was on FIRE at DC in the opening months of his new contract, and penned this (surprise!) continuity-heavy treasury, joined by artists Ross Andru and Romeo Tanghal. Superman must prevent the end of the world by solving a mystery surrounding his arctic fortress. Two things that stick out for me from buying and reading this one as a kid: the scene of Superman sitting in his fortress and enjoying a chocolate milkshake, and the treasury-sized, double-page spread of the Earth blowing apart. That scared the beejeezus out of me! 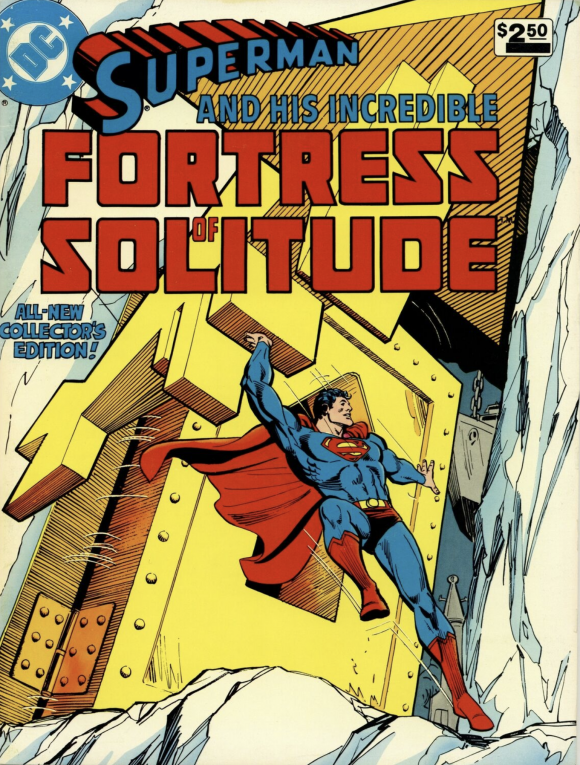 Superman II. When my Mom asked me what I wanted to do to celebrate my 8th grade graduation, I didn’t have to think twice — I wanted to go see Superman II the night it premiered, which happened to be the same day as the grad ceremony. We saw it at the Amboy Cinemas in Sayreville, NJ, and Mom even sprung for the program. To this day, it’s obviously one of the most memorable movie-going experiences of my life and that entire summer was dominated by my obsession over the film. I saw it multiple times in the theater and listened to the soundtrack album over and over and over and over. It meant the world to me. It’s worth noting that today we have two black cats — Lex and Zod. 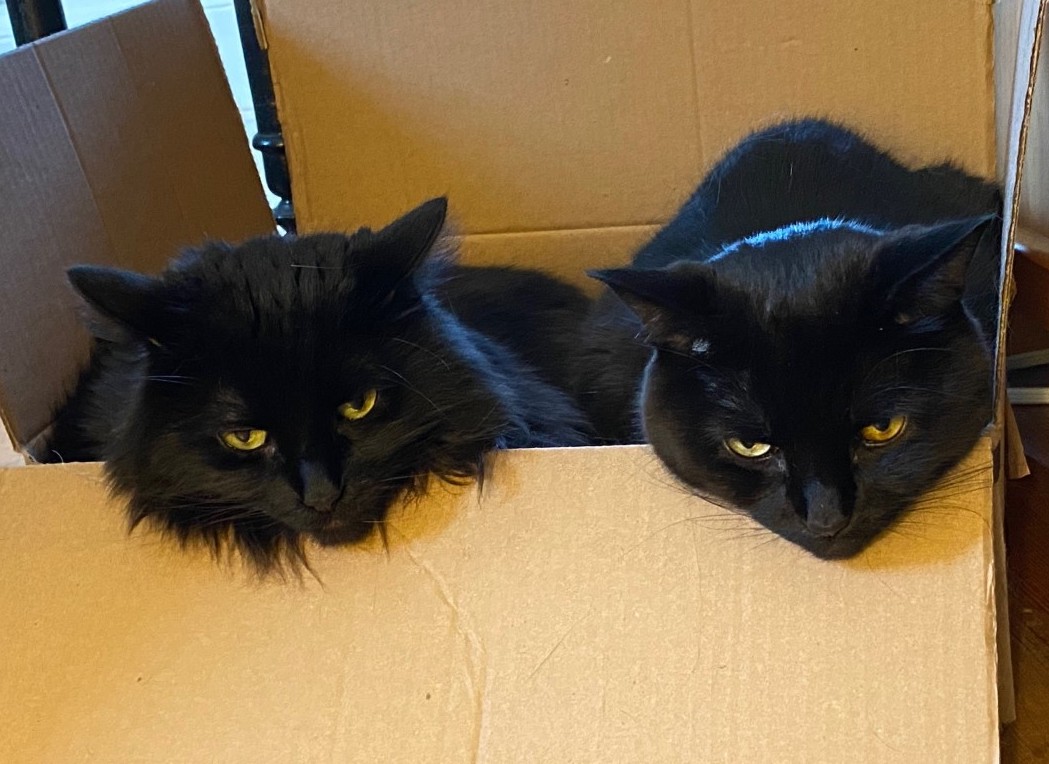 Box of villainy: Zod is the hairy one one on the left. Lex is the sleek one on the right. They’re brothers.

Detective Comics #506, DC. My Silver/Bronze Age Batman re-read continues apace and I’m smack in the middle of the Conway-Colan-Newton era, so I just read this one. At the time, I wasn’t that impressed but the story — introducing a minor villain called the Manikin — holds up better than I remembered. It’s creepy, and it’s slightly disappointing with the perspective of 40 years that Manikin didn’t become a bigger deal. (A similar villain — Calendar Girl — later popped up in The New Batman Adventures.) 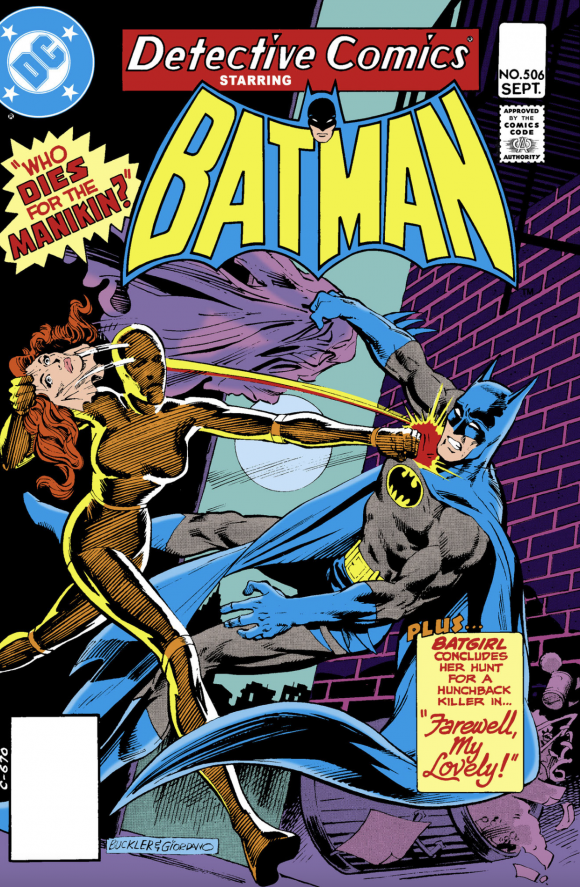 Marvel Super Special #19, Marvel. Larry Hama and Howard Chaykin’s For Your Eyes Only, one of the few straight-up James Bond movie adaptations. While the flick isn’t a personal favorite, it has something of a cult following — and Rob Kelly can tell you about it here. (The movie wouldn’t open until June 24.) 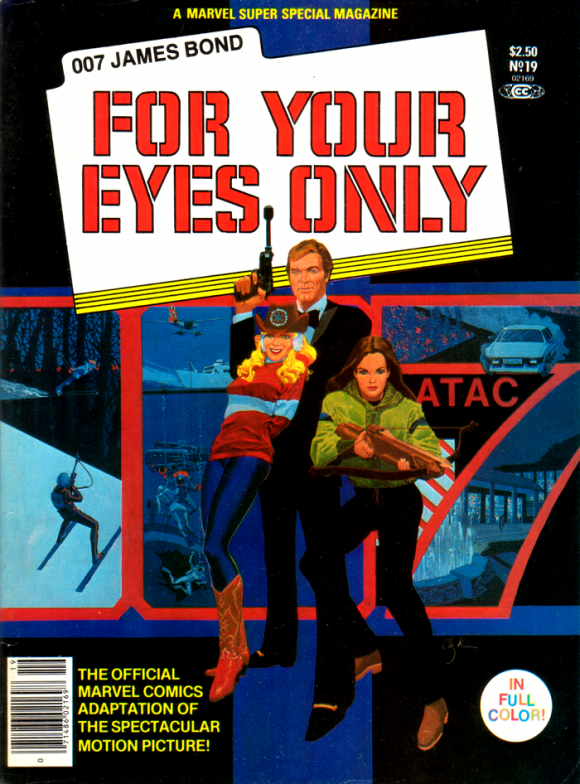 Superman II. For me, it was all about General Zod. If you watch Superman II today from a modern perspective, you have to admit it’s not a perfect movie. After the practically flawless first film, Superman II lurches into a far more comedic tone thanks to its new director Richard Lester, who didn’t care for Richard Donner’s more epic and widescreen approach to the Man of Steel. Scenes that should be shocking are played for laughs, with silly sight gags and wacky takes draining all the drama out of the situation. And Superman’s return at the end of the film to take revenge on a bully, though satisfying, feels wildly out of character. 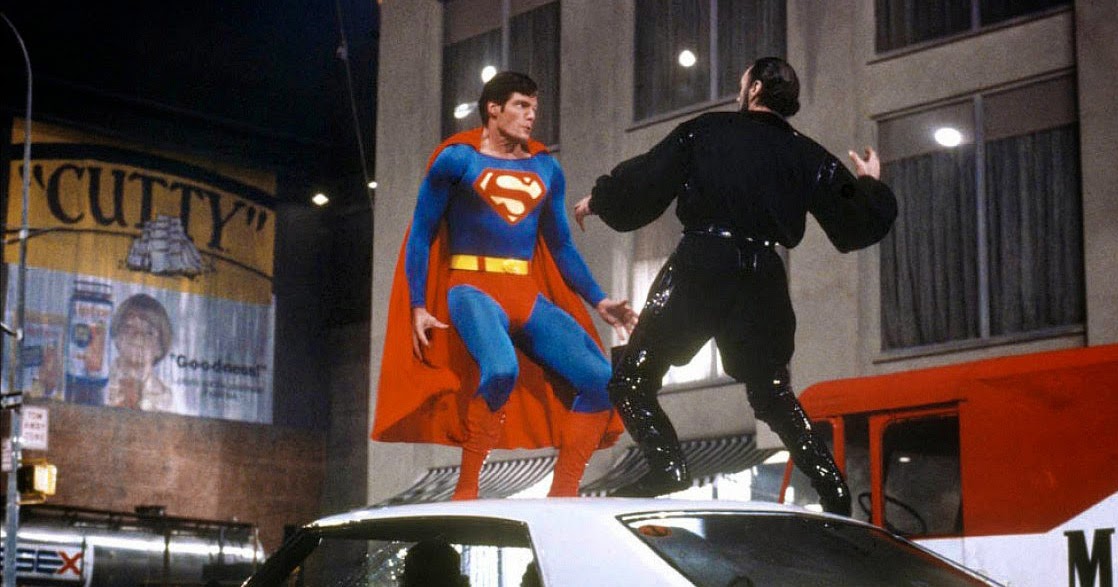 But none of that mattered to me when I was a kid in 1980. What I saw was what I’d always wanted to see: real live supervillains duking it out with Superman, in a way I‘d never seen anywhere before except in the pages of a comic book. Terence Stamp’s General Zod and his flunkies stole the show, and the exchanges between Zod and Gene Hackman’s Lex Luthor tied things into everything I loved about the first movie and made the whole enterprise feel that much more real.

The performances are great here across the board, and none better than Christopher Reeve, in that moment when a depowered Superman has been beaten up by the aforementioned bully in the diner, and Lois tries to comfort him, saying she only wanted the man she fell in love with, and a broken Clark whispers “I know that, Lois. I wish he were here.”

As a grown man, Superman II is enjoyable enough. But when I was little, it was perfect.

The Defenders #99, Marvel. In the late’70s and early ‘80s, it felt like the Defenders spent so much time in Hell they practically had a time-share there. 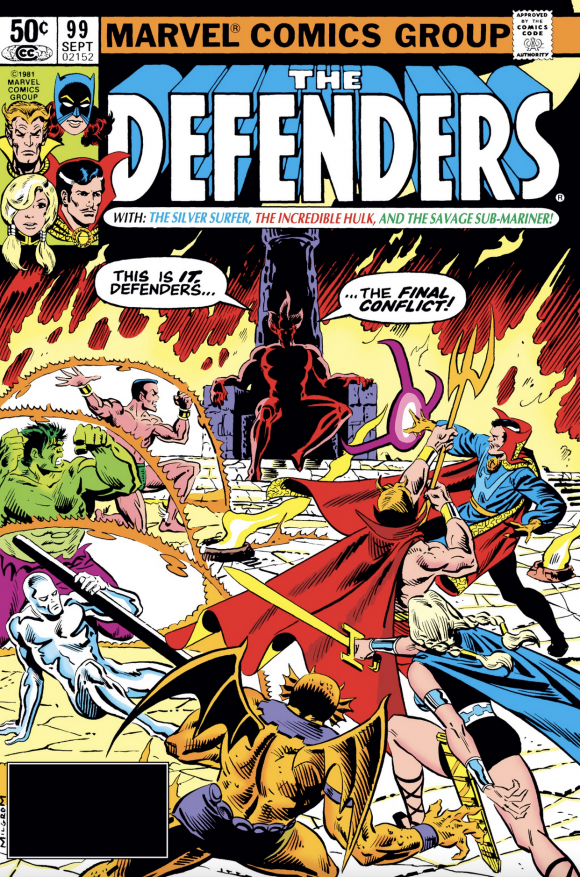 Raiders of the Lost Ark #1, Marvel. I remember this as one of the better movie-to-comics adaptations of the time, and especially liked this Gene Day cover. 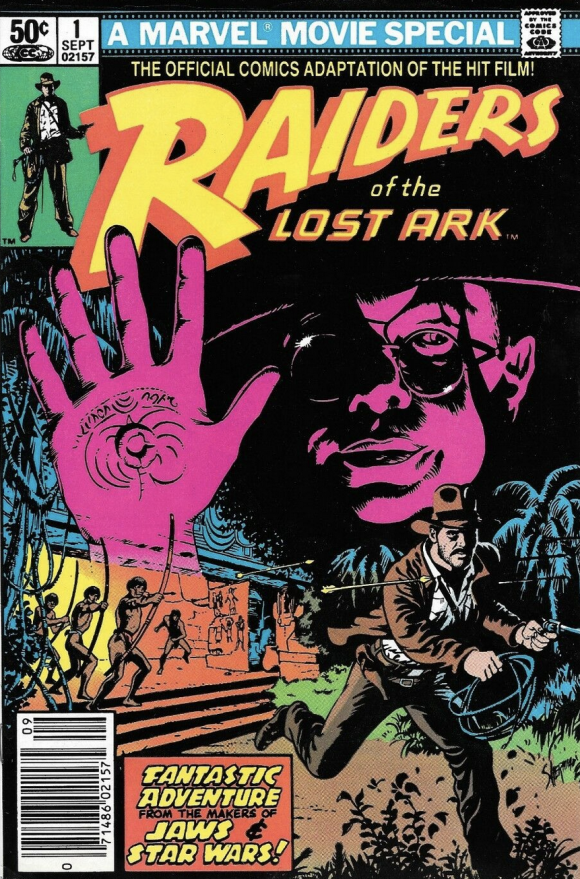 Dan adds: I liked Raiders a lot and I liked the comics adaptation by Walt Simonson, John Buscema and Klaus Janson too. (What a team!) But I also have to admit the film never moved me like its contemporary blockbusters (Superman, Star Wars, etc.) did. It might be time for me to watch it again…

The Brave and the Bold #178, DC. When you have a story with a supervillain monster made of paper, there’s no one better to draw it than Jim Aparo. So many sharp angles… (Cover by Buckler and Giordano.) 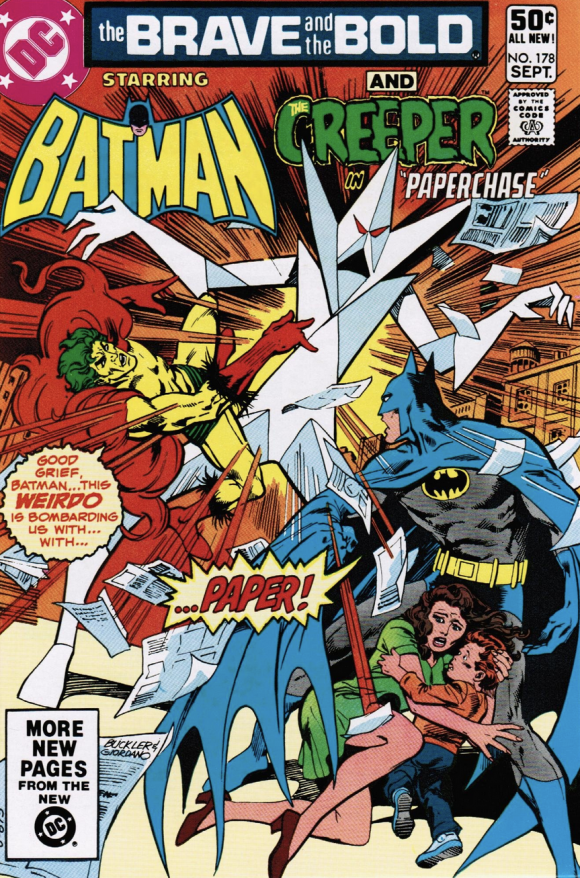 Iron Man #150, Marvel. An Iron Man classic! Iron Man and Doctor Doom wind up stranded in the days of Camelot, and must work together to return home. The Michelinie/Romita Jr./Layton team at its best. 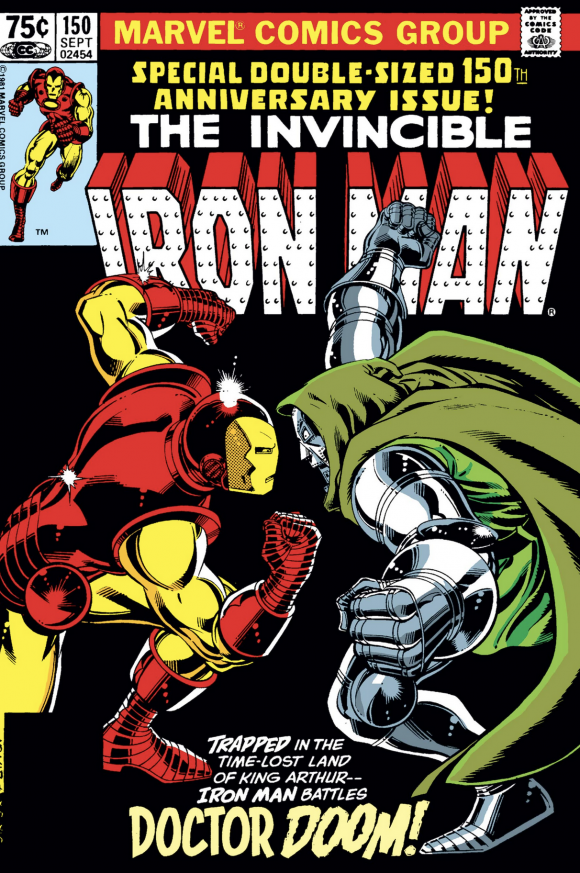