Scott and Dan — along with guest Stuart Moore — hit up the comics racks from 46 years ago!

This week for RETRO HOT PICKS, Scott Tipton and I are joined by Stuart Moore, a founding editor of DC’s Vertigo imprint who’s had a lengthy career in the biz as a writer and novelist, most recently with AHOY Comics, where he’s scripted the popular series Captain Ginger and Bronze Age Boogie.

Stuart and fellow creators Max Akbar, Val Semeiks and Kim DeMulder (plus others) are crowdfunding through Ominous Press a groovy sci-fi project — a hardcover collection of the webcomic The Vi Empire, about vampires, secretive government operatives and intergalactic war.

Dig this video and click here to check out the Kickstarter:

Has all the right ingredients for a bombastic space opera, yes? Yes.

(Keep in mind that comics came out on multiple days back then — as has become the case now. So these are technically the comics that went on sale between May 30 and June 5.) 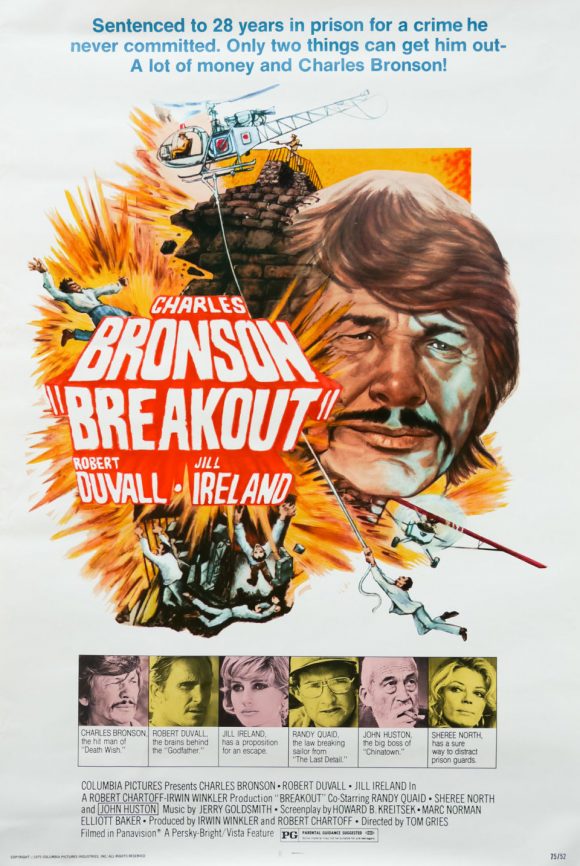 So let’s set the scene: Gerald Ford was president. The Charles Bronson actioner Breakout was tops at the box office, but a juggernaut was lurking below. Ba-dum. Can you hear it? Ba-dum. Ba-dum. It’s headed this way. Bump bump bump bump bump bump bump, buddap-BAH… Yep, Jaws would be out by the end of the month. I saw it opening weekend. I was 8. Bad idea. Didn’t even want to go in the pool for the rest of the summer. (I didn’t fall in love with the movie until years later when it was on HBO.)

A rerun of the MASH episode White Gold — featuring outrageously funny guest star Edward Winter as Col. Flagg — topped the Nielsens. John Denver’s Thank God I’m a Country Boy was the best-selling single, with America’s Sister Golden Hair in second. Elton John’s monster hit Captain Fantastic and the Brown Dirt Cowboy — which was certified gold before it even came out — hit the top of the album charts in its first week. It’s the first album to do both.

Kamandi #33, DC. We’re near the end of Jack Kirby’s lengthy run on Kamandi here. The story feels a little like his late Fantastic Four, where he slowed down the nonstop character invention of the early issues and concentrated on battles between existing characters. But there’s plenty of Kirby action, as Ben Boxer the metal mutant clashes with Tuftan the tiger prince, while Kamandi and Dr. Canus try to build a body for a helpless alien being. This series was a big influence on my series Bronze Age Boogie, which I wrote for AHOY Comics. 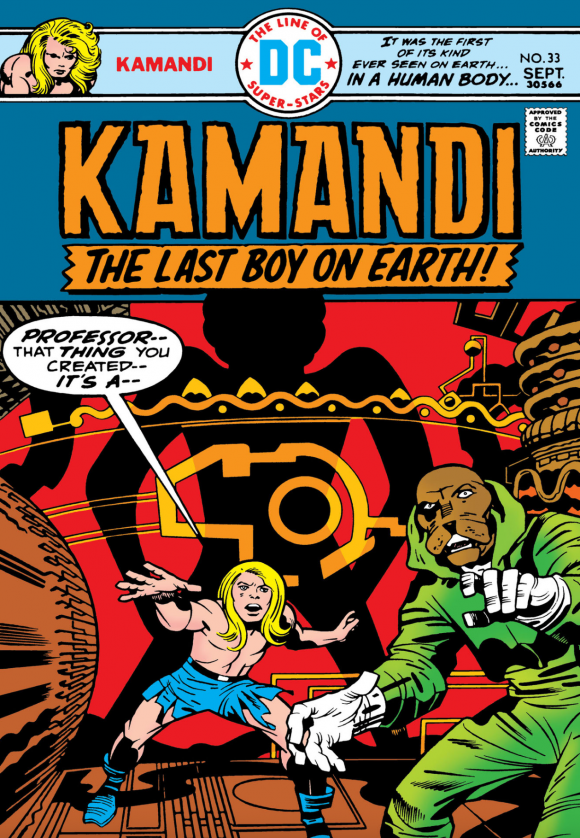 Marvel Treasury Edition #6, Marvel. Almost all the Marvels that came out this week were reprints — but this one is a beautiful oversize collection spanning the Sorcerer Supreme’s history to that point. Featuring gorgeous art by Steve Ditko, Bill Everett, Gene Colan, the underrated Marie Severin, Dan Adkins and Frank Brunner, who provided new front and back covers. A buck and a half was a lot of money back then, but this book delivered. 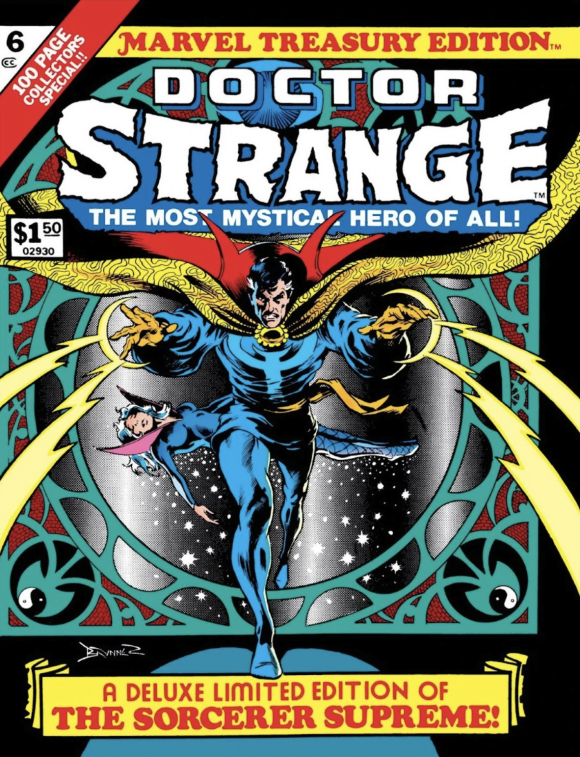 Walt Disney Super Goof #35, Gold Key. I haven’t read this book — no one’s read this book. In fact, it’s a tossup whether fewer people alive have read this or Tragg and the Sky Gods #2, which Gold Key also published that week. But when I was 6 years old, the idea of Goofy eating special peanuts, tying a towel around his neck, and flying around like a super hero was just the greatest idea in the world. 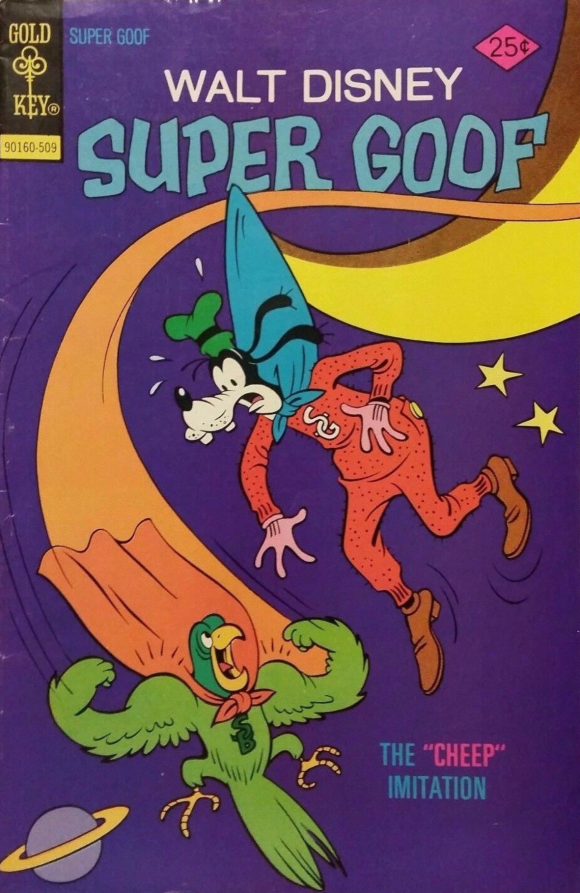 Batman Family #1, DC. I’ve written this before, but pound-for-pound, Batman Family was the most consistently entertaining Batcomic of the ’70s. Of course, it was only around for a few years before it was merged with Detective Comics, but it doesn’t matter. No series brought the fun, month in and month out, like Batman Family. And the premiere issue was one of the best published during the whole run, with a lead Robin-Batgirl story by Eliot S! Maggin and Mike Grell. (The Teen Wonder and the Dominoed Daredoll have rarely looked better.) 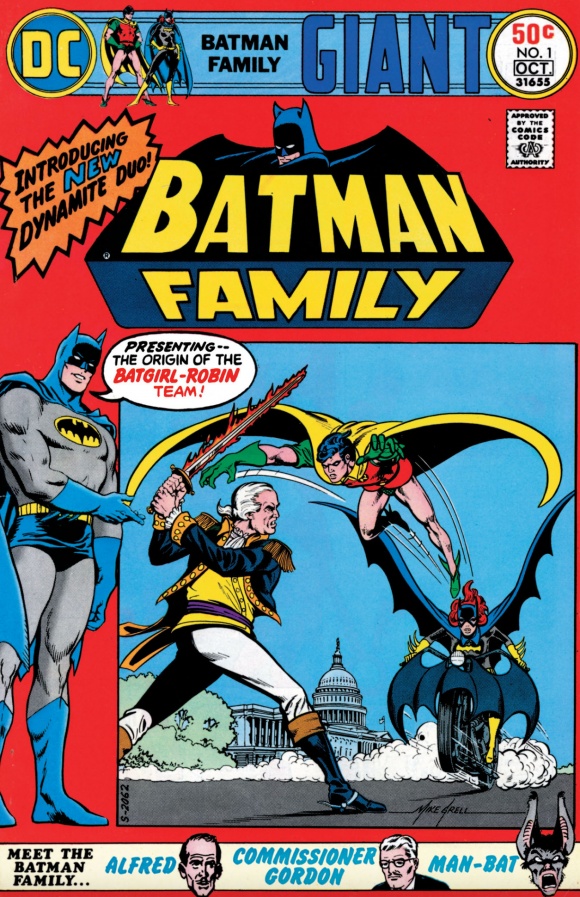 Scott adds: All through my childhood, I was a huge fan of Batman Family, primarily for its tales of “the Dynamite Duo,” Batgirl and Robin. To this day, I very rarely pass up an issue.

The Joker #3, DC. One of DC’s stranger experiments in the ’70s. The Clown Prince of Crime was already re-established as a homicidal maniac and the publisher had to work under the Comics Code edict that the bad guy always had to get caught in the end. So what tension is there? None, so the comic quickly became a sort of cracked-mirror version of The Brave and the Bold where the guest star was the selling point and not the plot. That said, I recently re-read the complete run (nine issues, plus a tenth that wasn’t printed until 2019) and it’s a lot of fun even if it doesn’t make much sense. 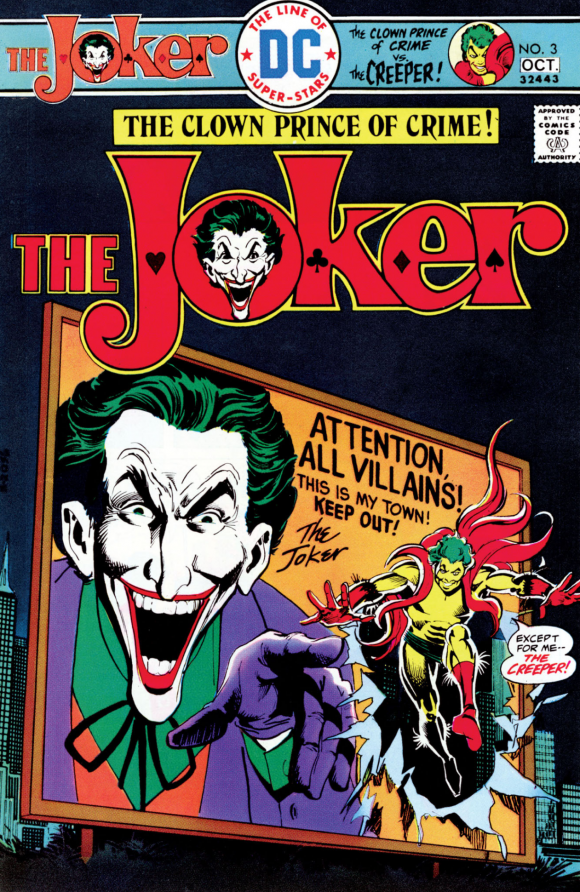 Scott adds: The first encounter between the Joker and the Creeper! Lots of giggling sound effects here, as I recall, plus first-rate art by Ernie Chan and Jose Luis Garcia-Lopez.

Pep #304, Archie. There were 21 Archie titles out this week. Twenty-one! Pep #304 would have been my pick, though, because it had a baseball cover. I wonder how many kids made their Archie picks for reasons just like that. 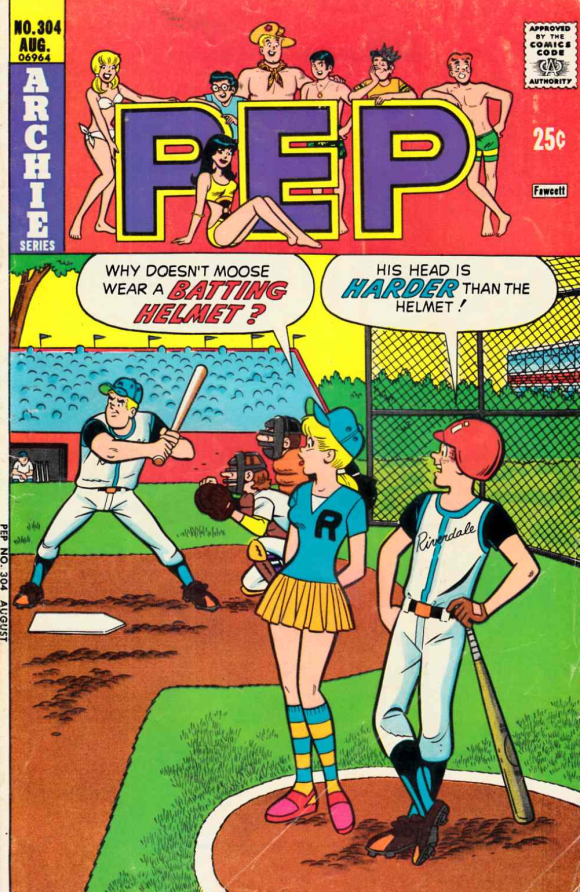 The Deadly Hands of Kung Fu #14, Marvel. On the strength of that classic Neal Adams cover alone. 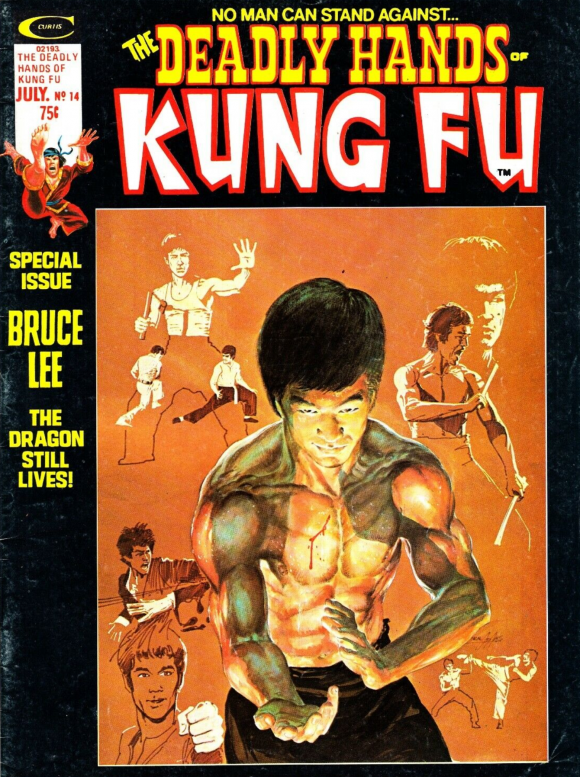 Speed Buggy #2, Charlton. I had an issue of Speed Buggy as a kid, and I think it was a direct adaptation of an episode, which even then struck me as weird. I also remember thinking the art was actually pretty good for a Saturday-morning tie-in comic. 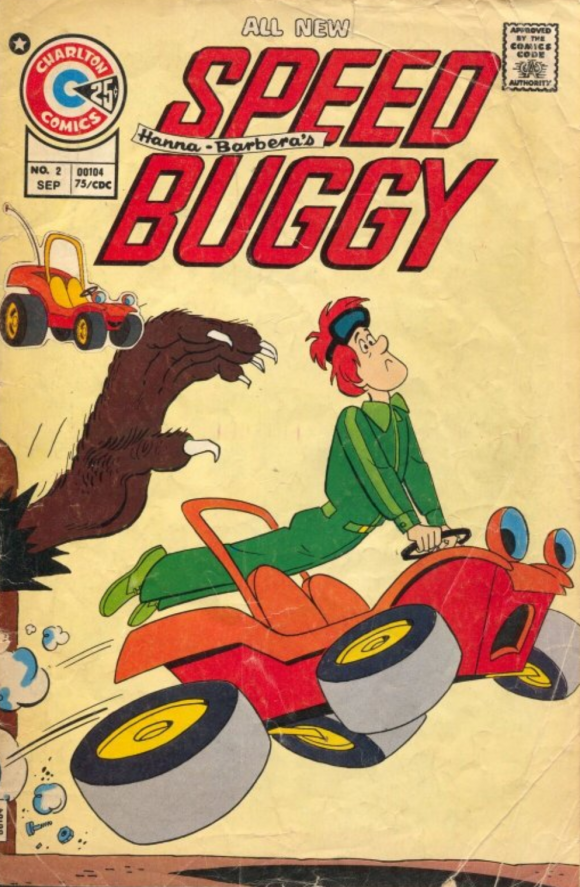 Dan adds: I watched that show. It was Scooby-Doo with a talking dune buggy instead of a dog. Pretty sure I had the lunchbox, though.

Marvel Spectacular #17, Marvel. I’ll be honest: I would probably have bought this just to see how much difficulty the Ringmaster and his Circus of Crime could really have given Thor. 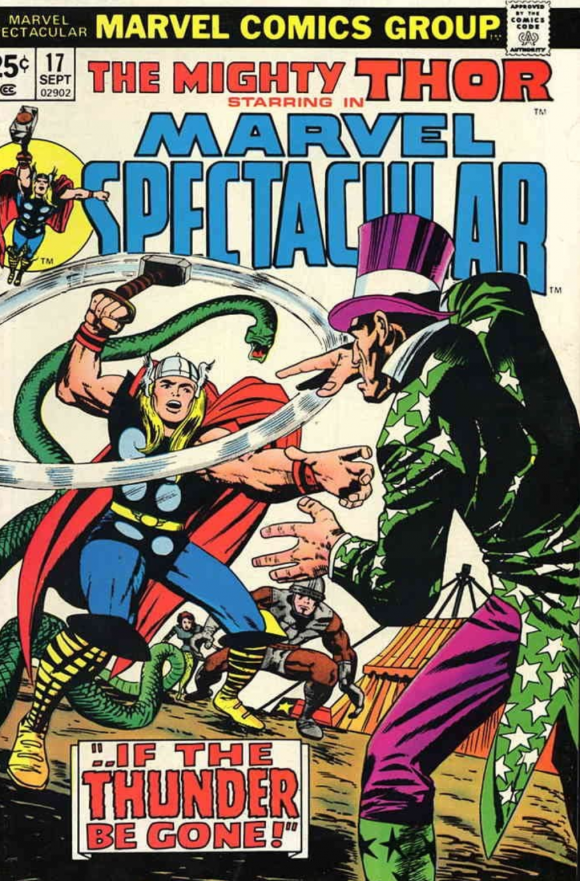