Marvel to Re-Release Another Set of EPIC COLLECTIONS This Summer

Earlier this week, we took you through Marvel’s summer line of Epic Collections. You can click here to check that out but we also have a run of big-time re-releases for you.

Dig these, broken down by decade — with all info from Amazon listings: 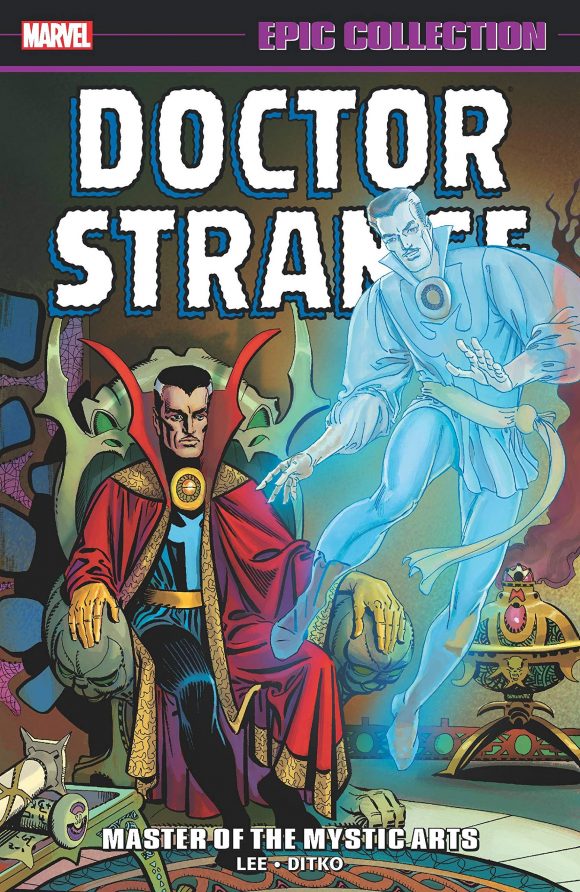 By Stan Lee and Steve Ditko

A vain man driven by greed and hubris, Dr. Stephen Strange was a world-renowned surgeon until the night a car accident crippled his hands. Broken and destitute, he journeyed to Tibet to seek a cure from a legendary healer. There he found not a man of medicine, but the venerable Ancient One — and the path to the mystic arts! From Doctor Strange’s eerie Greenwich Village home, Stan Lee and Steve Ditko created new dimensions and otherworldly terrors unlike anything seen before. These classic first stories remain as influential today as they were to 1960s counter-culture. In this premiere volume, experience the debut of iconic characters including Baron Mordo, Eternity, Dormammu and the Mindless Ones — as well as Strange’s faithful servant Wong, and the mystic mistress Clea! 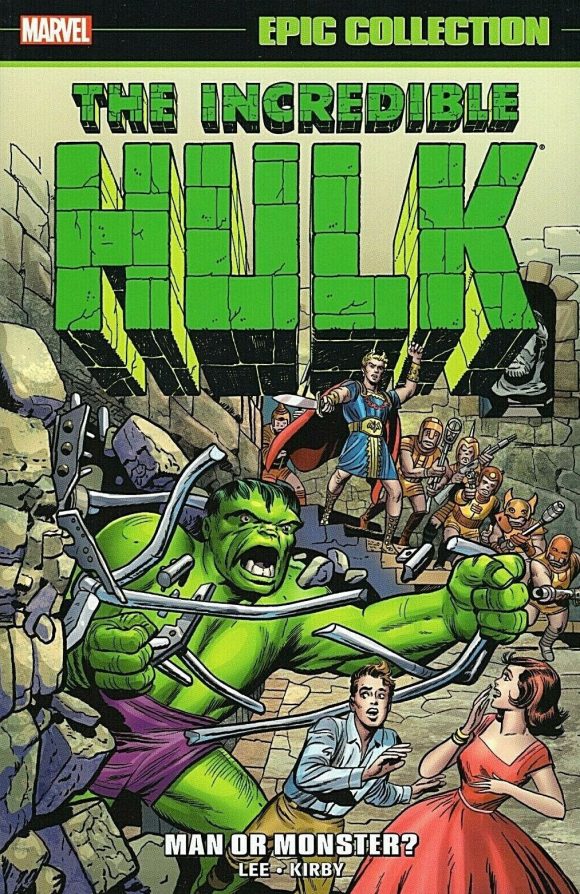 By Stan Lee and Jack Kirby

Dr. Robert Bruce Banner may look like a mild-mannered scientist, but after being caught in a gamma bomb explosion, he became the unstoppable engine of destruction known as the Hulk! Stan Lee and Jack Kirby’s atomic update on the Dr. Jekyll/Mr. Hyde paradigm mixed the might of giant monsters with Cold War intrigue and psychological drama. Decades later, it’s a formula that still has readers clamoring for more! For the first time, this Epic Collection follows Hulk’s every adventure. His original series; his time with — and against — the Avengers; his first confrontation with the Thing; encounters with Spider-Man and Ant-Man; and a mythic battle with Thor! 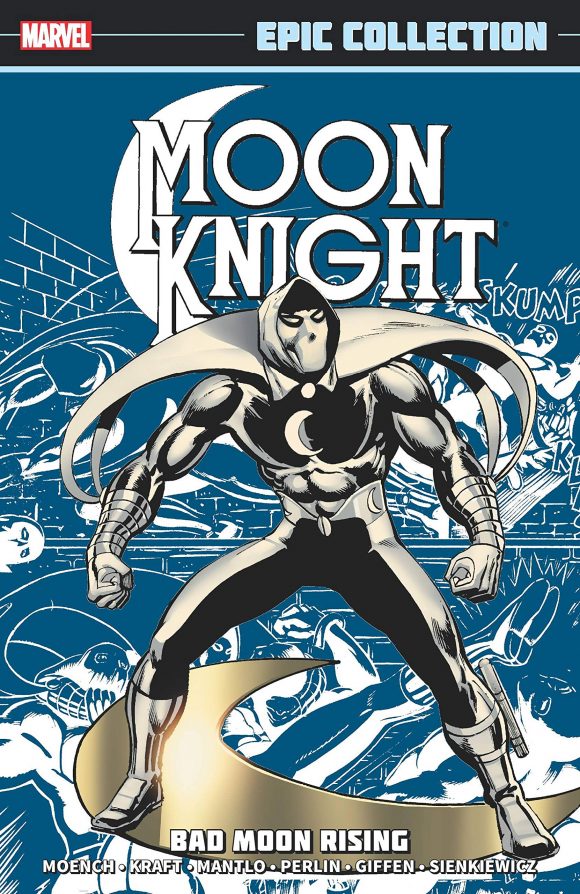 Discover the many faces of the Moon Knight! Mercenary. Werewolf-hunter. Super hero. Millionaire playboy. Cab driver. Ghost? Moon Knight is many things to many people, with the multiple personalities to match! Follow the Fist of Khonshu as he battles to find his place in the Marvel Universe in this collection of his earliest appearances. From his startling debut as a nemesis of Werewolf by Night to an unlikely stint with the Defenders, from encounters with Spider-Man and the Thing to the solo adventures that shaped a legend. Relive the rise of the moon’s specter of vengeance! 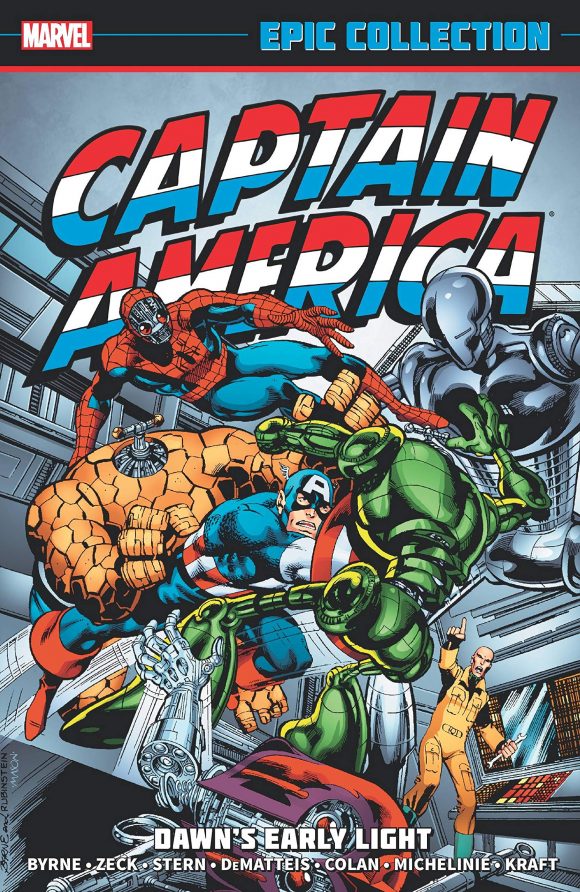 Even for Captain America, life has rarely been this eventful! Battling the robotic Dragon Man above New York, considering running for President, and saving Manhattan from fiery destruction at Batroc and Mr. Hyde’s hands is all in a day’s work. And a trip to England proves to be no vacation either, as Cap encounters the vampire Baron Blood and the chilling Ghost of Greymoor Castle! Back home in the States, our hero learns that Hollywood plans to make a Captain America movie…the only problem is, his greatest foe, the Red Skull, has a very different script in mind! Finally, Cap has to prevent Morgan MacNeil Hardy from rewriting the American dream — but can even Spider-Man help him stop the cyborg SULTAN from destroying Washington DC? 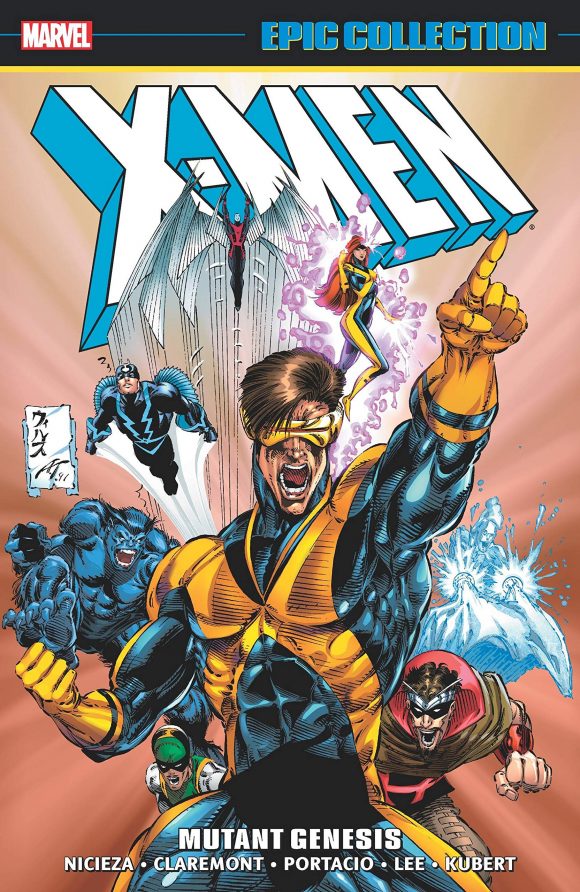 The end of an era for the X-Men! The original team, now called X-Factor, takes center stage when Proteus returns from the grave. But when Apocalypse strikes, infecting Cyclops’ son Nathan with a deadly virus, Cyclops must make a bitter sacrifice! And the current X-Men return to Earth to find that Professor X’s old foe the Shadow King has risen — and taken over Muir Island! It will take X-Factor and the X-Men’s combined strength to triumph…and when the dust clears, the two teams will become one! An uncanny new era begins as the reunited X-Men go back to basics — beginning with a deadly confrontation with Magneto and his fanatical Acolytes!

— The dates are Amazon sale dates, which means the books are likely to be released a week or two earlier in comics shops.

— Want more Epic Collection intel? You definitely do. Useful links are below.