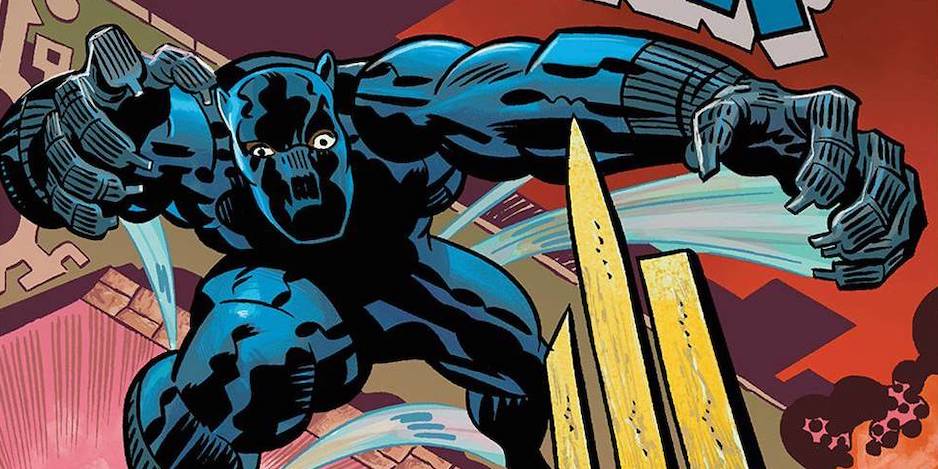 All things considered, Marvel’s Epic Collections are probably my favorite line of reprint volumes. I love that the stories are presented in straightforward, chronological order, even if the collections are not released that way.

Bottom line, it’s about the reader’s experience. Few things frustrate me like picking up an author- or artist-based collection and getting to read only the parts of a story produced by that creator.

Plus, they’re affordable: Typically priced at $39.99 for about 400-500 pages, Epic Collections get you access to some of the best and biggest stories ever to come from the House of Ideas. 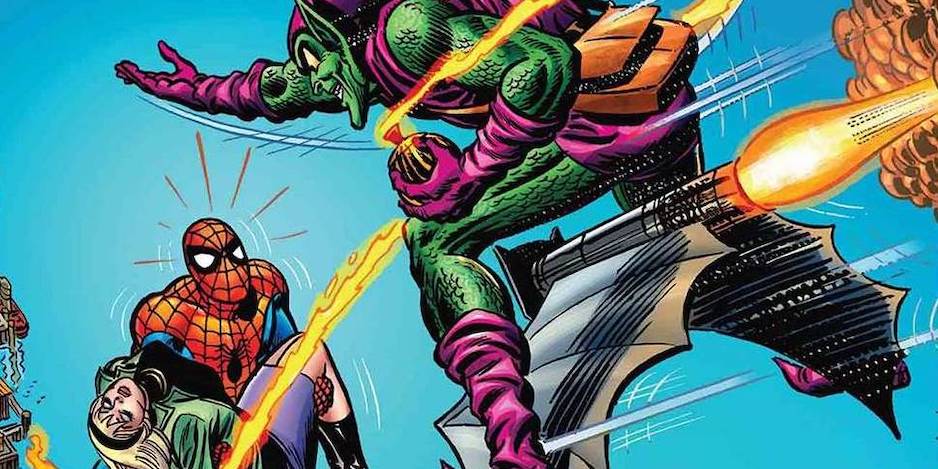 Of course, just like comics and other books, Epic Collections themselves can go out of print. But I’ve noticed in my proverbial travels of late that Marvel plans to re-release a slew of popular Epic Collections in early 2021.

Here they are, in chronological order of re-release, along with their official descriptions: 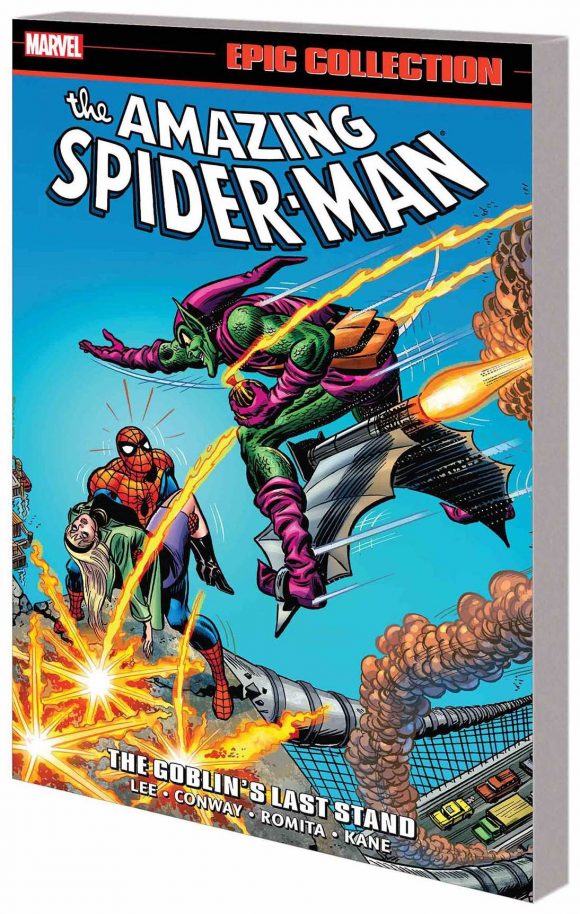 The tension-torn adventures of comics’ most put-upon super hero, the Amazing Spider-Man, continue! Stan Lee, John Romita Sr., Gil Kane and Gerry Conway bring you new creations like the Gibbon, and the return of iconic adversaries like Doctor Octopus and Kraven the Hunter! It’s enough excitement to give a hero an ulcer – and it does! Spidey also teams up with Doctor Strange against a mystic threat, goes toe-to-toe in a fight against the Incredible Hulk and faces Hammerhead – the only gangster with more steel in his dome than in his gun! The drama reaches its peak when the Green Goblin kidnaps Gwen Stacy in the story that put a generation into therapy and cemented the Goblin’s name as the definition of evil. Don’t miss this seminal chapter in Spidey’s history!

Avengers West Coast: How the West Was Won – Jan. 19 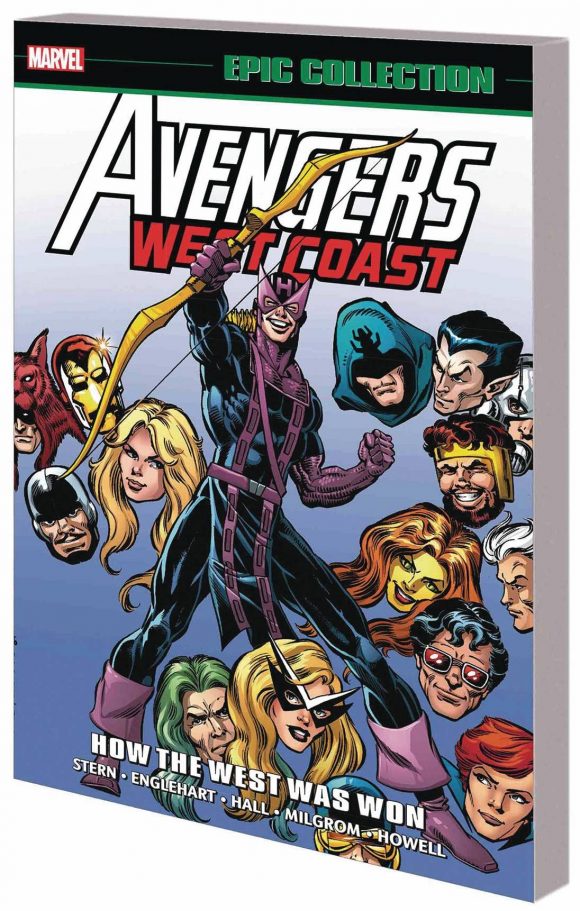 Earth’s Mightiest Heroes go West! When Vision creates a second squad, Hawkeye grabs the first Quinjet to California to lead the West Coast Avengers – including Mockingbird, Wonder Man, Tigra and an Iron Man or two! But will local vigilante the Shroud join the West Coasters? How about Firebird, Hank “Ant-Man” Pym and the Ever-Lovin’ Blue-Eyed Thing?! The “Whackos” quickly make their own enemies – including the Blank, Graviton, Master Pandemonium and a villainous Goliath! Plus: Kraven the Hunter targets Tigra! Wonder Man battles Sandman! And Vision and Scarlet Witch lend a hand against the Grim Reaper and Ultron! 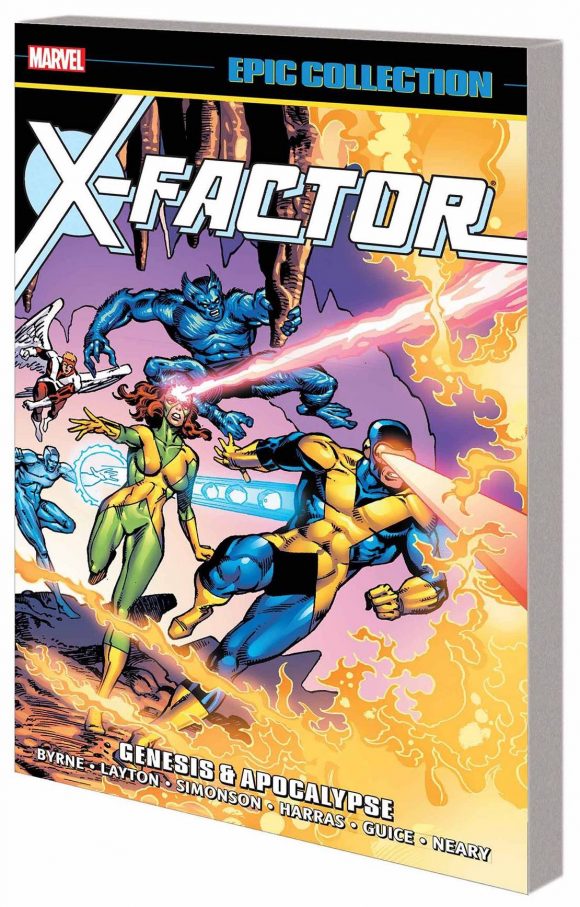 One triumphant return, one diabolical debut! When Jean Grey is found alive – with a little help from the Avengers and Fantastic Four – she reunites with the rest of Xavier’s original class to form X-Factor! But as Cyclops, Marvel Girl, Beast, Angel and Iceman face new enemies Tower and Frenzy, little do they realize the villains are part of an Alliance of Evil led by…Apocalypse! They’ll fight Iron Man and Spider-Man, encounter uncanny foes such as Bulk and Glow Worm, and take on old sparring partners in Freedom Force – but there’s no question who will rise to the role of X-Factor’s arch-nemesis. The story of En Sabah Nur begins here! 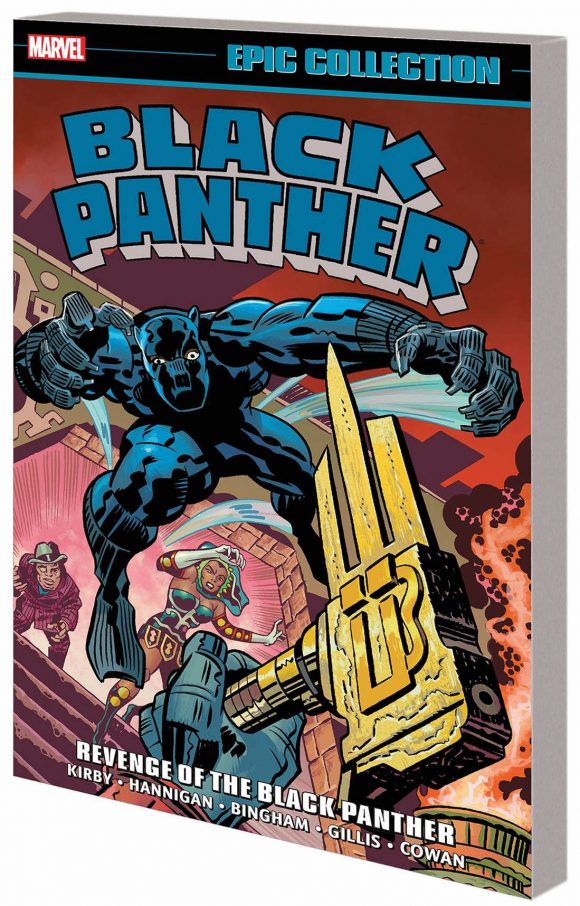 Behold as the Black Panther sets out on adventures that only his co-creator, Jack Kirby, could conceive! T’Challa discovers the startling secret of King Solomon’s frog, encounters alien races, battles eternal samurai warriors – and so much more! The history of the Wakandans, their majestic city and their amazing technology are also explored with a power and passion that only Kirby could offer! Plus: The origins of Vibranium! An epic battle between the Black Panther, the Avengers and Ulysses Klaw! T’Challa returns to the American South to root out the evil Soul Strangler’s cult! And Peter B. Gillis and Denys Cowan craft a compelling and contemporary tale as the Black Panther fights apartheid in the neighboring nation of Azania. 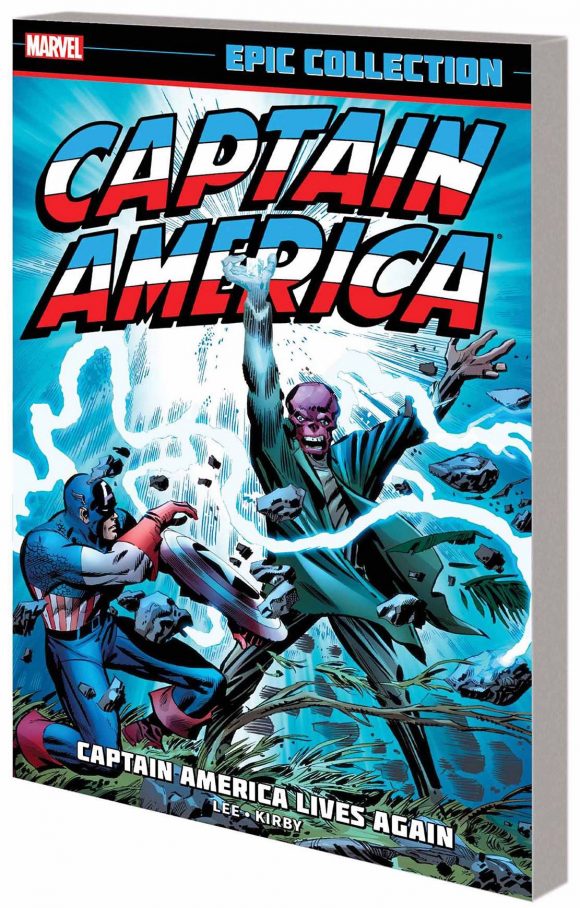 Transformed by the Super-Soldier Serum from a 98-pound weakling into Captain America, Steve Rogers led the charge to liberate the world from the Axis powers! But before World War II’s end, an accident left him frozen in suspended animation and his sidekick, Bucky, dead. The world turned on for decades – and when the Avengers finally resuscitated him, Steve Rogers was greeted by a world vastly changed. He was a man out of time, tormented by the death of his partner – but no less committed to the cause of fighting evil in all its forms! In this Epic Collection, Stan Lee and Jack Kirby bring you the rebirth of an American icon. The rebirth of Captain America! 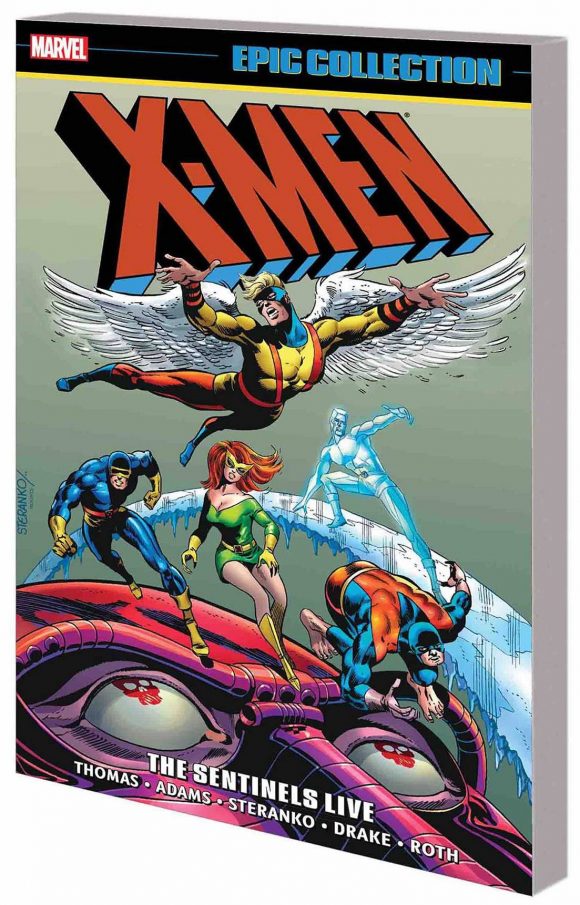 Professor X is dead! The X-Men have gone their separate ways! In the late 1960s, searching for a way to reinvigorate its poorest-selling super heroes, Marvel was trying anything and everything. With the title on the verge of cancellation, writer Roy Thomas and artist Neal Adams suddenly clicked – and the rest is history! Their epic evolution of the X-Men defines the team to this day. Adams’ lavish and dynamic visuals and Thomas’ challenging and contemporary stories combined in a book that throbbed with the pulse of the times. Their iconic stories collected here introduce Cyclops’ brother Havok, the vampiric villain Sauron, the Savage Land Mutates and X-Man-to-be Sunfire! Not to mention the Living Pharaoh, a classic team-up with Ka-Zar…and don’t forget the return of Magneto! 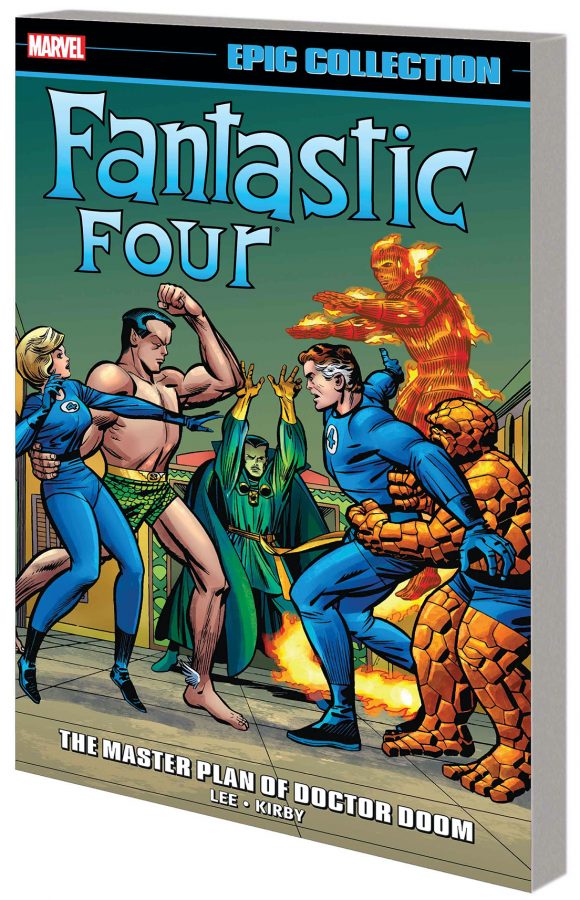 Lee and Kirby set the standard for out-of-this-world imaginative adventure and launched the Marvel Universe in the pages of Fantastic Four. Now, with all the MU super hero players in place, it’s time for the FF to run the gauntlet. The Thing throws down with the Hulk in a battle so huge it takes the combined might of the FF and the Avengers to stop it! The Sub-Mariner makes a play for Sue Storm! The FF tangle with the X-Men! Nick Fury drops by in the story that set the table for “Agent of S.H.I.E.L.D.”! And even Doctor Strange makes an ever-so-astral appearance! 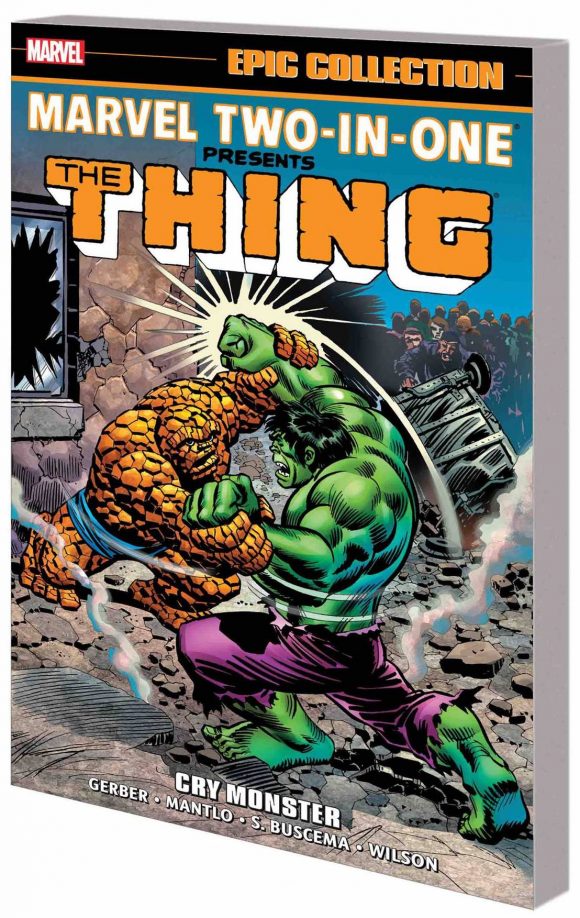 Watch out, Yancy Street! Benjamin Grimm, A.K.A. the Fantastic Four’s ever-lovin’ blue-eyed Thing, is stomping his way into his own series – guest-starring the greatest heroes in the Marvel Universe! In this inaugural MARVEL TWO-IN-ONE Epic Collection, the Thing battles the Incredible Hulk, the minions of Thanos and the giant monster Braggadoom – and even brings the Guardians of the Galaxy back into the firmament of Marvel stars! He also joins forces with icons like Iron Man, Thor, Black Widow, Daredevil and Luke Cage to battle all manner of fearsome foes! And to top it all off, the Thing travels to the pages of MARVEL TEAM-UP to join the amazing Spider-Man in a MTIO/MTU crossover classic! 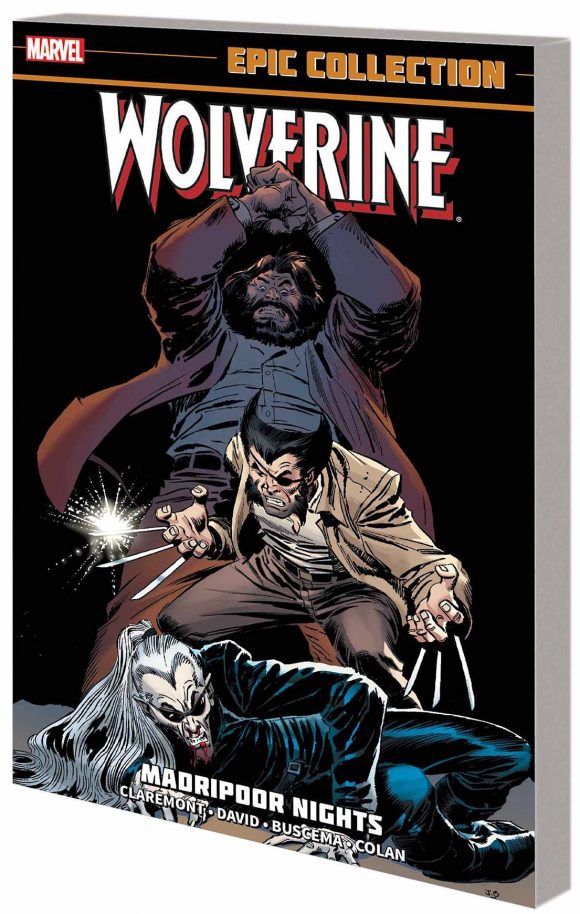 He’s the best there is at what he does — but what he does isn’t very nice. And now, Wolverine has broken out of the X-Men and into his own solo series! Feeling the urge to cut loose, Wolverine travels to Madripoor — an East Indian island full of pirates, cutthroats and…just the way Logan likes it! There, he’ll take on ruthless crimelord Roche, meet the cunning Tyger Tiger, wield the mystical Black Blade, battle superhuman enforcers Roughouse and Bloodsport, and contend with drug kingpin Nguyen Ngoc Coy and his niece — the former New Mutant known as Karma! Plus: The Hulk comes to town, a formative battle with Sabretooth is revealed, and Wolverine hunts for the Gehenna Stone! Guest-starring Jessica Drew, aka Spider-Woman! 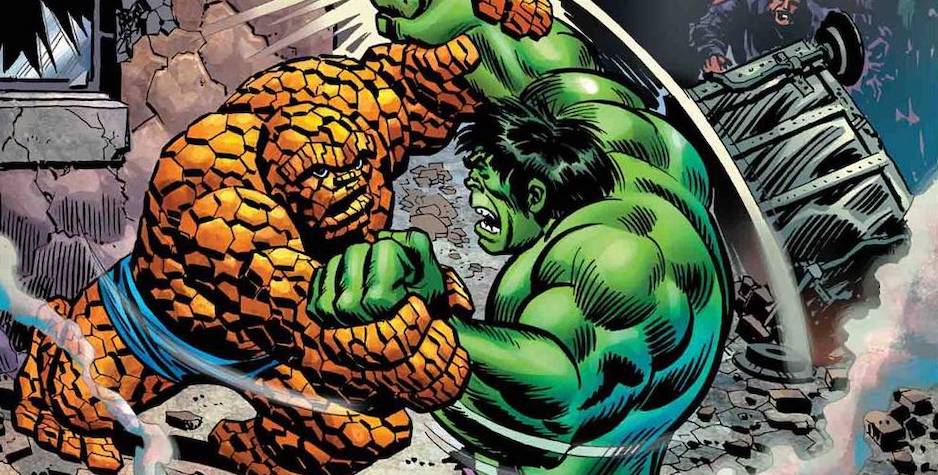 — Only two of these books have been officially solicited by Marvel — The Goblin’s Last Stand and How the West Was Won. The rest come from Amazon listings, which means nothing is official until it’s official from Marvel. And even then, things can change.

— All release dates are from Amazon. Each edition will likely be in comics shops a week or two earlier.

— For whatever reason, there was no description to go with Madripoor Nights, so I used the 2014 edition’s.