There’s a reason Star Trek episodes like “Mirror, Mirror” or alternate universes like DC’s Earth-3 are so popular.

So it only goes to figure that if people love the Batmobile, they’ll dig the Jokermobile or the Catmobile or even the Jokercopter.

Taking that to its logical conclusion, Eaglemoss has, as part of its Batman Automobilia line produced a veritable fleet of villainous vehicles.

I’ve already covered ones like the 1966 TV show Kitty Car (click here) and Jokermobile (click here), but the comics had even more colorful incarnations, so here are four of my faves that Eaglemoss has released.

Why am I doing this now, when these have all been out for awhile, you ask? Because A) I’ve found that a lot of these flown under fans’ Batradars and B) it’s fun. 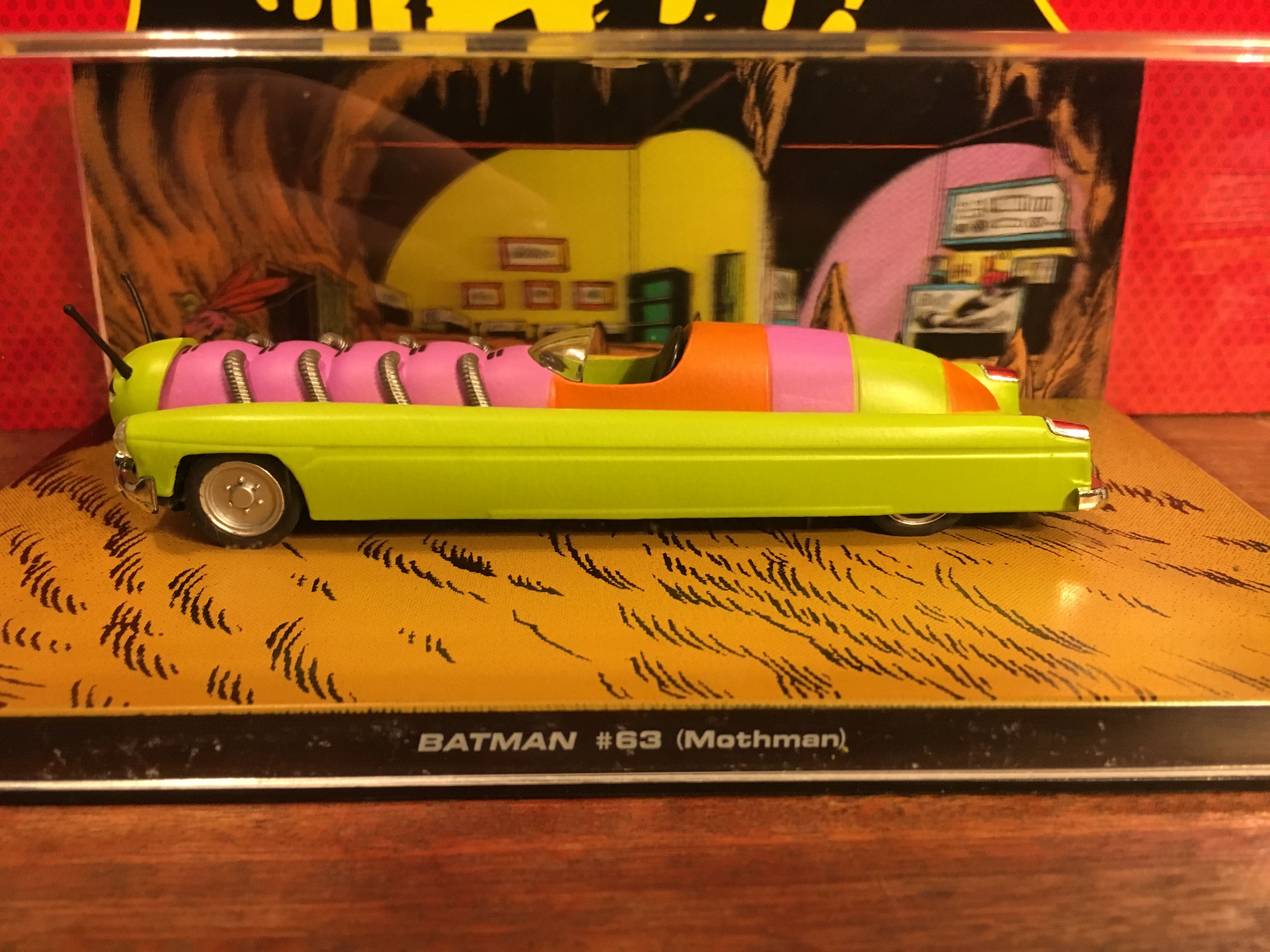 This one might be the best villain vehicle of all time because it’s so damn stupid, like Killer Moth himself. I mean, the idea makes sense in comic-book way: Ambitious criminal decides to aid run-of-the-mill criminals in the same way Batman aids run-of the-mill cops. Why said criminal decided to pick the image of a moth dressed in ’50s-style pink, orange and green, I couldn’t tell you.

Anyway, Killer Moth had the Mothmobile, which debuted in Batman #63 but really should have been called the Caterpillar Car or maybe the Pupamobile given how it looks. 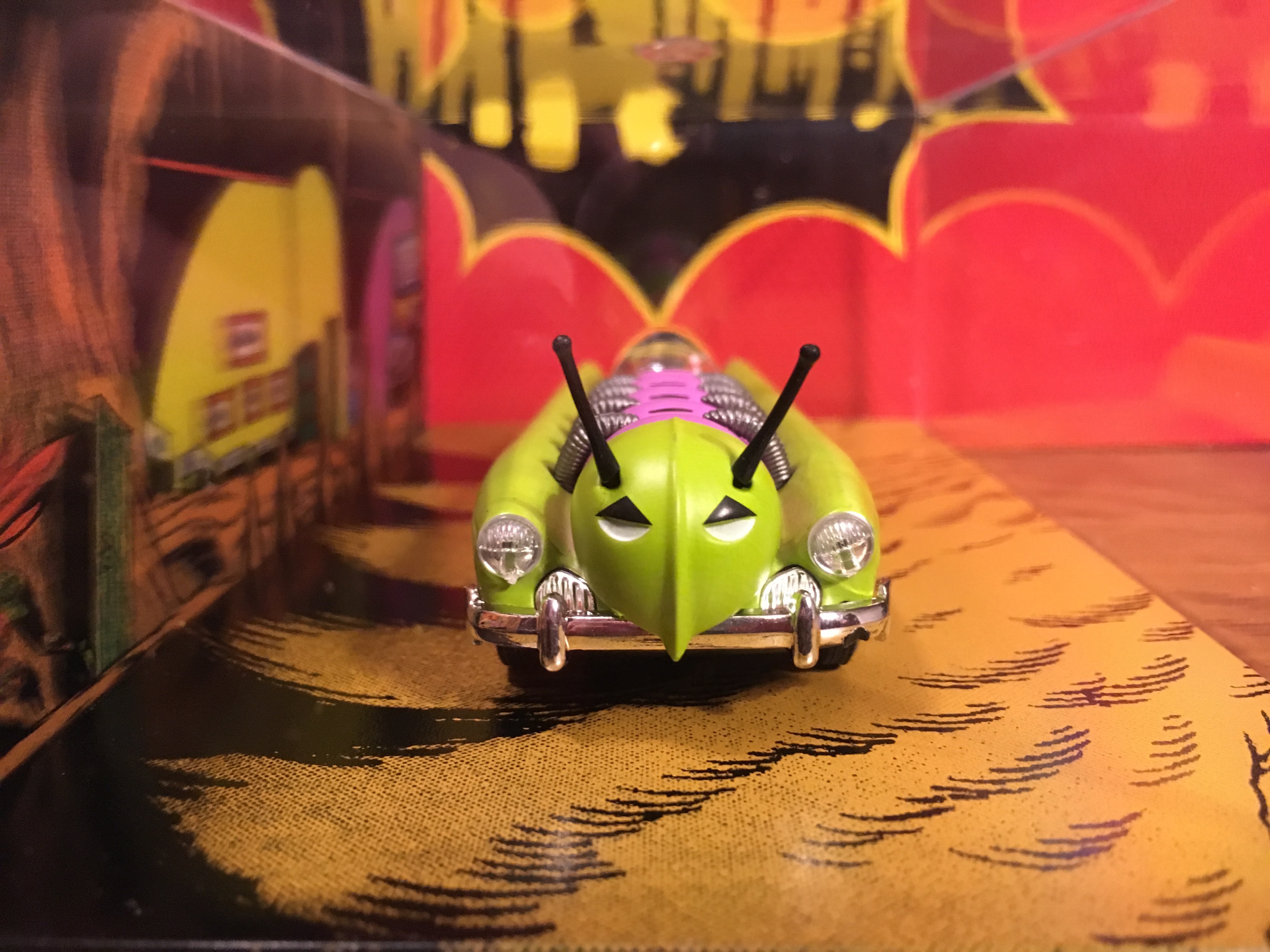 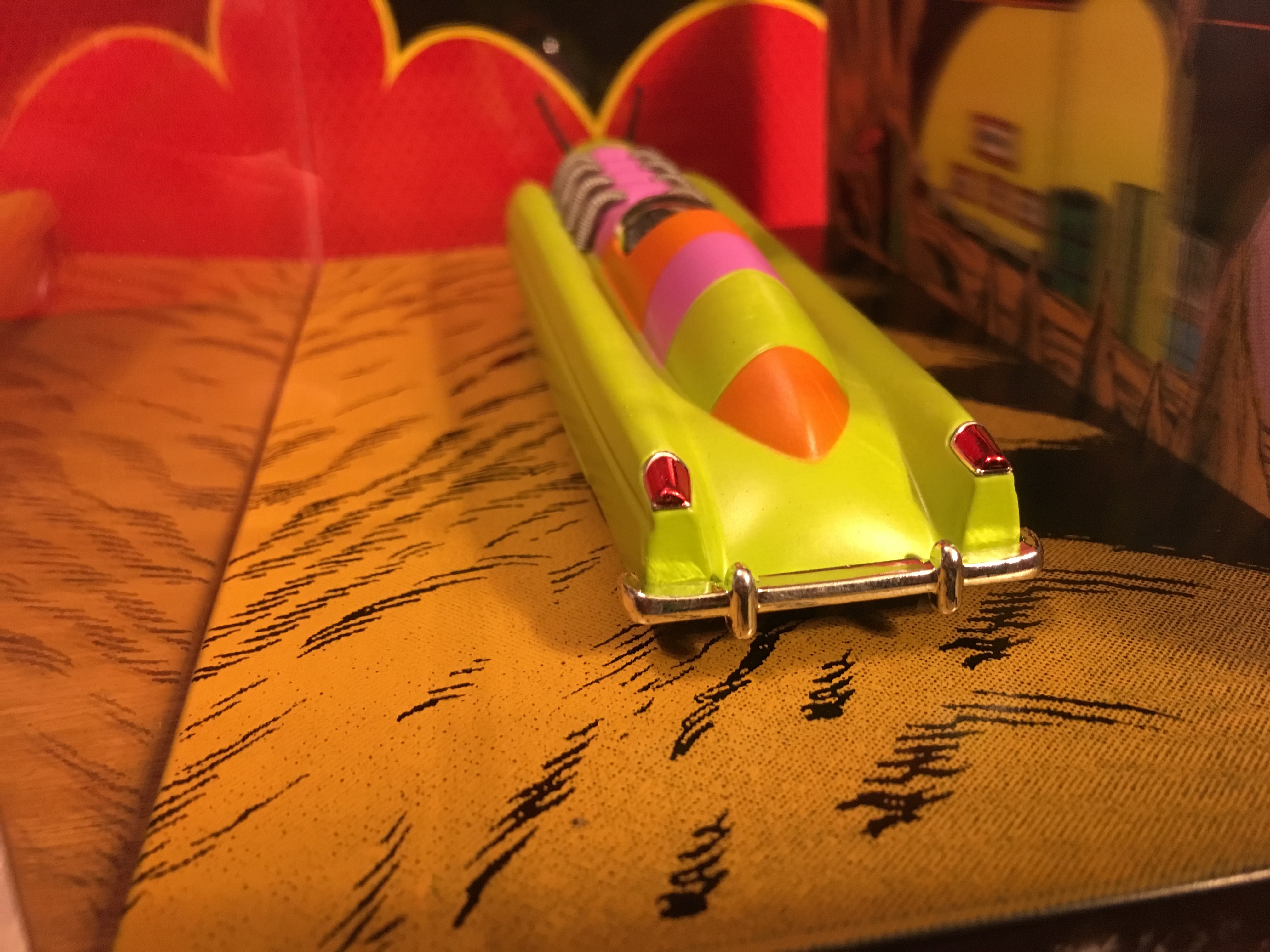 Now, I’m not at all clear why the Eaglemoss people have decided to call Killer Moth “Mothman,” but hey, nobody’s perfect. These evil geniuses deserve enormous credit just for putting this thing out there. 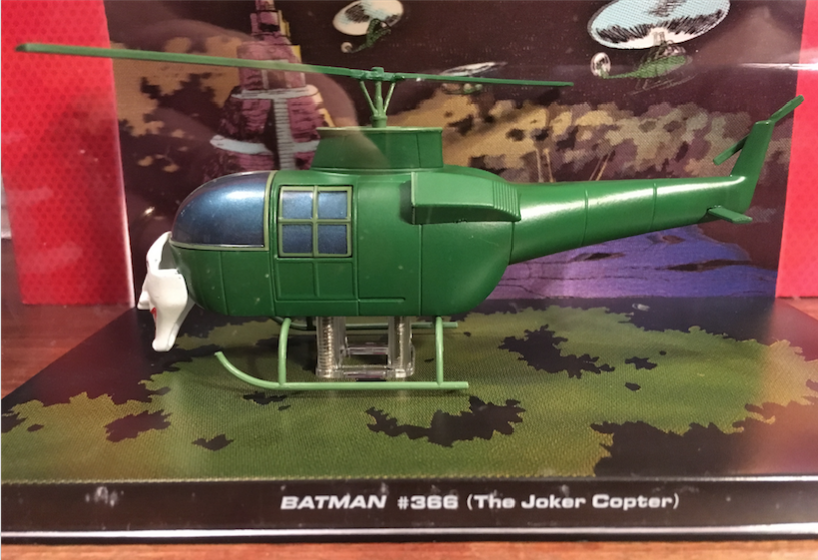 Man, I love the Bronze Age. It was a period that synthesized so much of comics history — more “adult” than the Silver Age but not as depressing as so many of the “grim and gritty” comics that came later. So there was still room for an irony-free appearance of a Jokercopter in Batman #366 — which is also notable not only for its classic Walt Simonson cover but for Jason Todd’s debut as Robin. (Sort of. It’s complicated.) 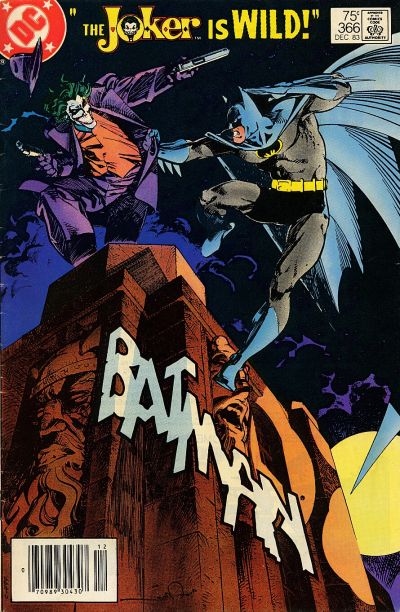 The Jokercopter made its appearance in Guatemala, where the Joker was trying to pit rebel and government forces against each other with the goal of building a Joker theme park. 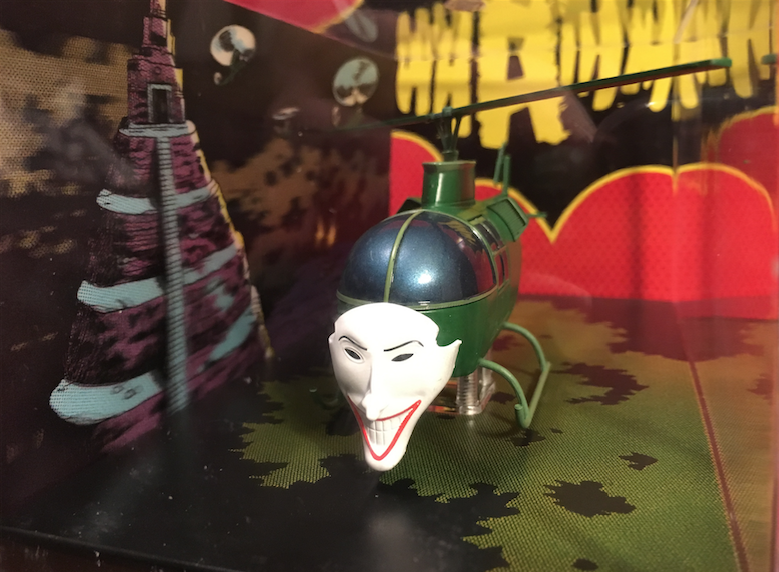 Note the pyramid on the 3D backdrop. 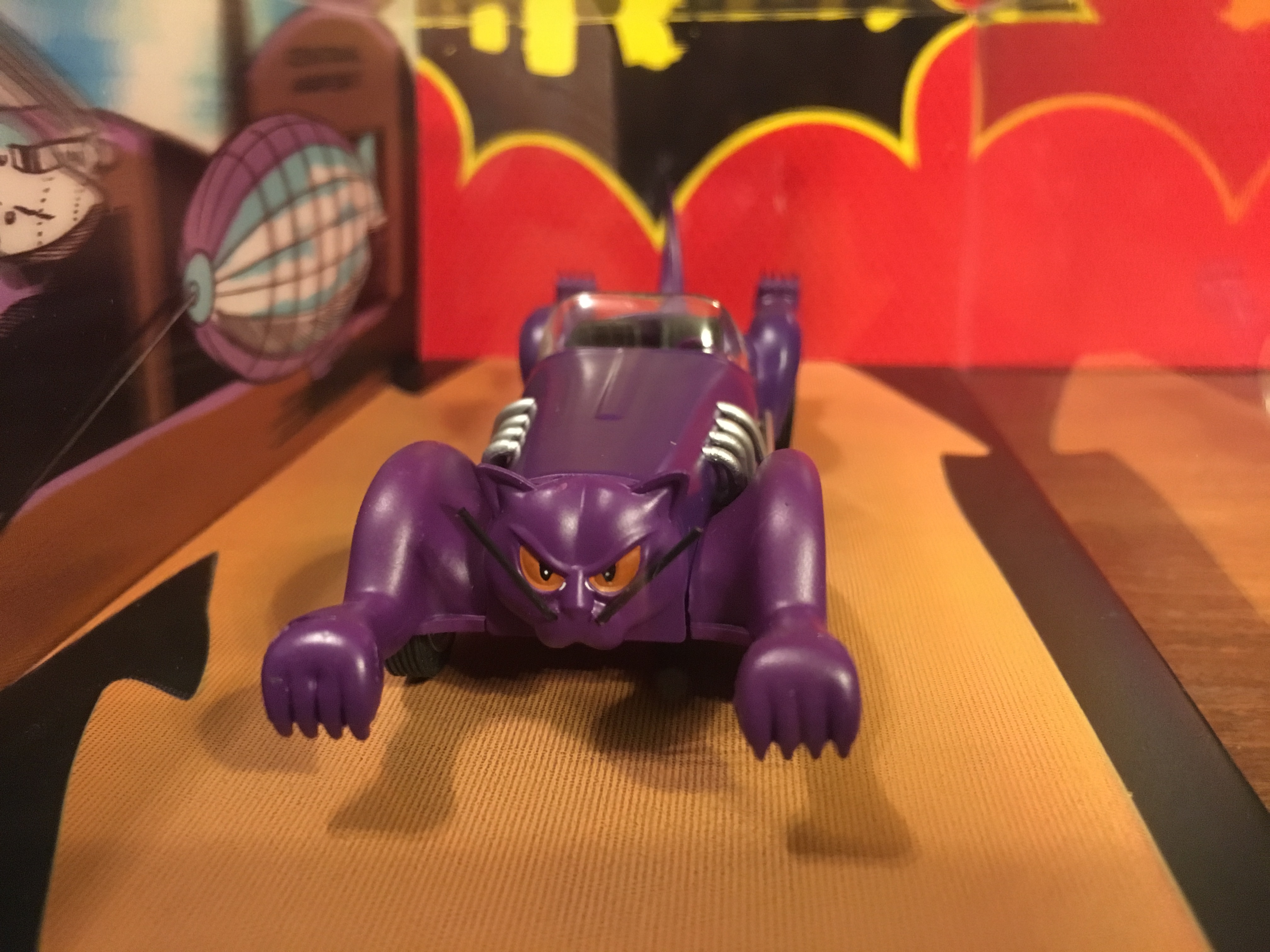 Catwoman got into the vehicle game back in the Golden Age, well below the Kitty Car’s debut as Eartha Kitt’s groovy ride. This appropriately hued purple roadster — which came off the line during one of Catwoman’s many purple periods — was an excellent foil for the classic batheaded Batmobile of the time. 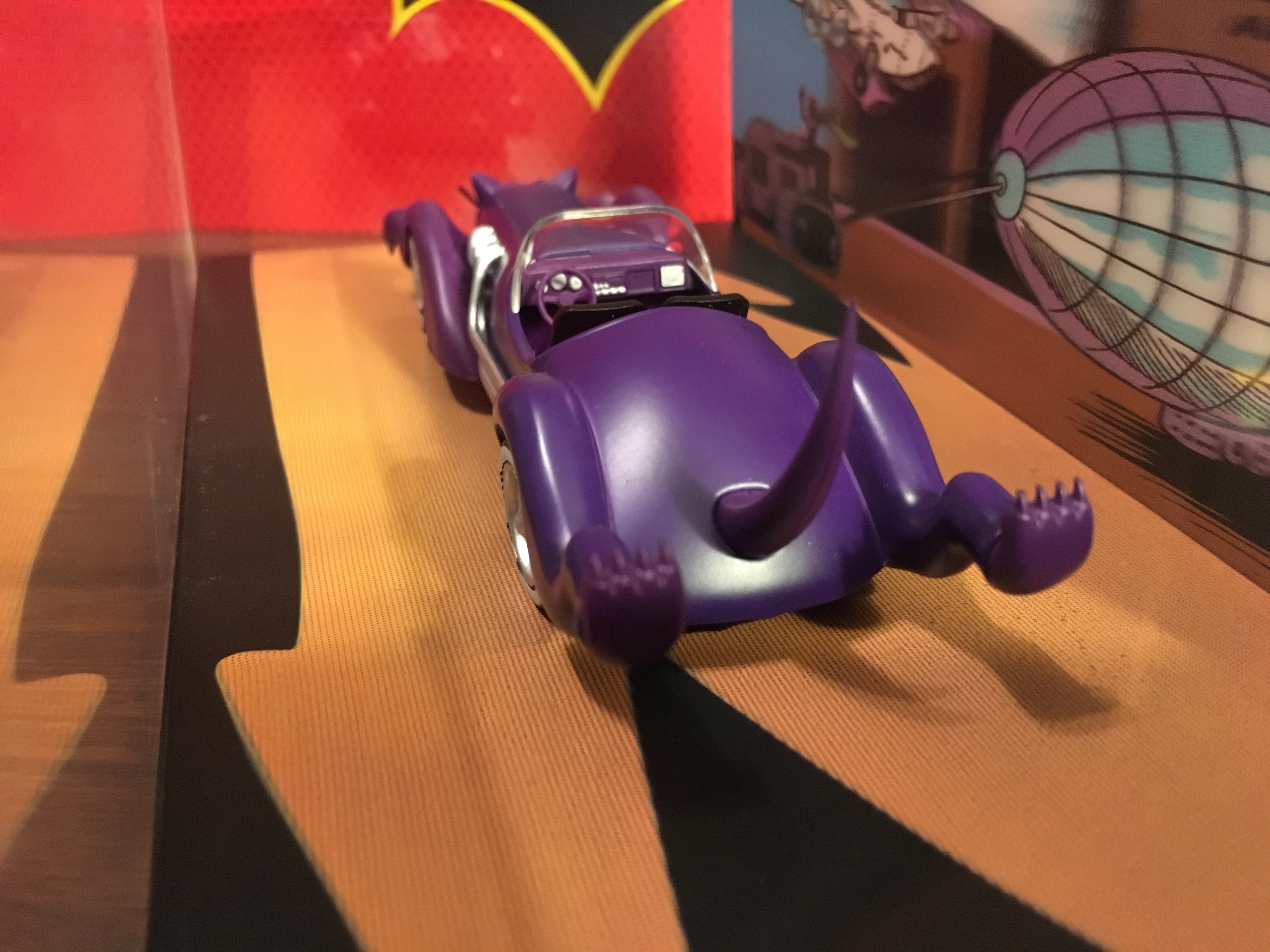 Eaglemoss gets the details right on this one with those whiskers, the piping and the fierce-looking claws. This also has one of the more action-oriented backgrounds and I dig that. 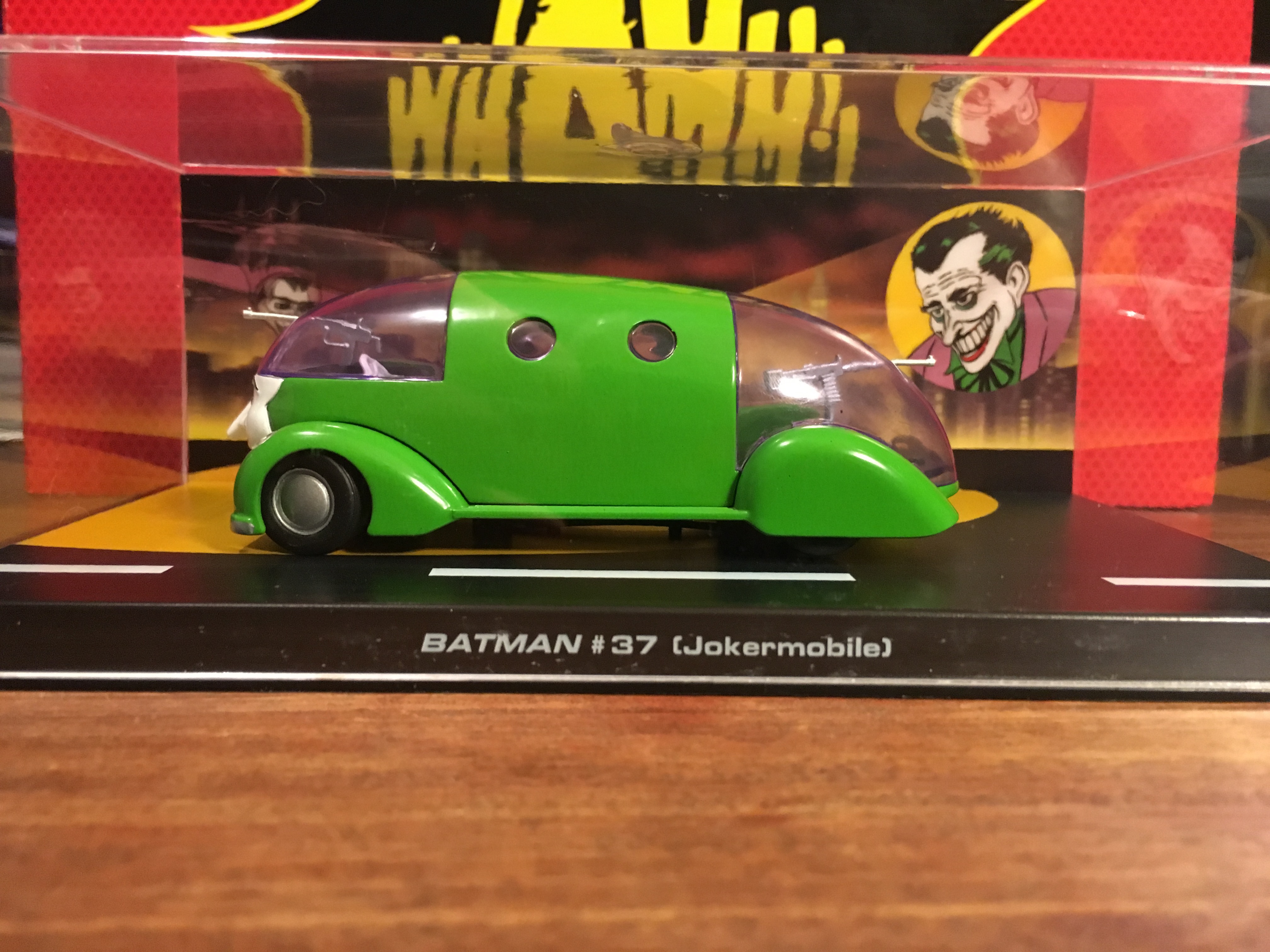 This really is the grand-daddy of the villainous vehicles, the one seen on one of the most famous covers in Batman history and making appearances thereafter. Really, the Joker should always have a Jokermobile, even today, because whether he’s painted as a homicidal maniac or as simply an unhinged prankster, the Clown Prince of Crime has style. 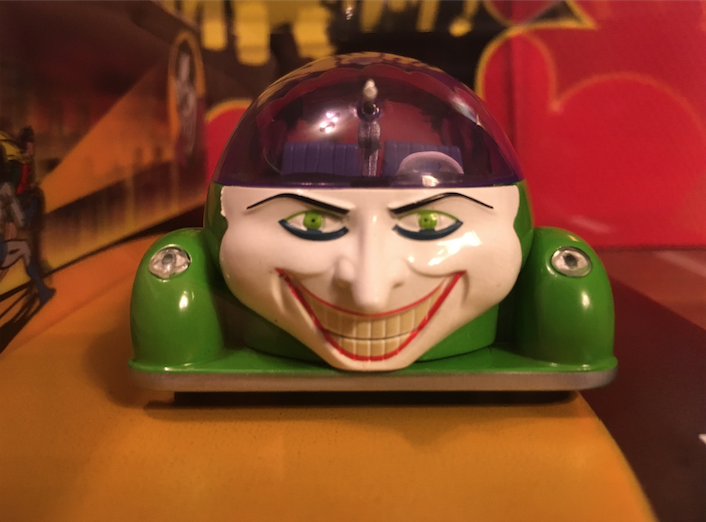 I challenge new Batman writer Tom King to bring back the Jokermobile. C’mon, Tom, you can do it.

Requisite how-to-get-’em info: You can get them through your comics shop, online retailers or through Eaglemoss directly. They run about $20 a pop depending on where you get them and each comes with a full-color info mag, complete with a gatefold that shows all sorts of faux and fanciful specs and blueprints, like so: And to check out our look at the Batmobiles of the Golden Age, click here.