Eaglemoss’ Jokermobile issue of Batman Automobilia was the BATBOOK OF THE WEEK (click here) and Surf’s Up, Joker’s Under is #8 in our BATMAN ’66 Top 13 Episode Countdown (click here).

Here, we bring it all together with a pix-aplenty inside look at the Jokermobile itself, the newest Eaglemoss Bat-vehicle to make it stateside. 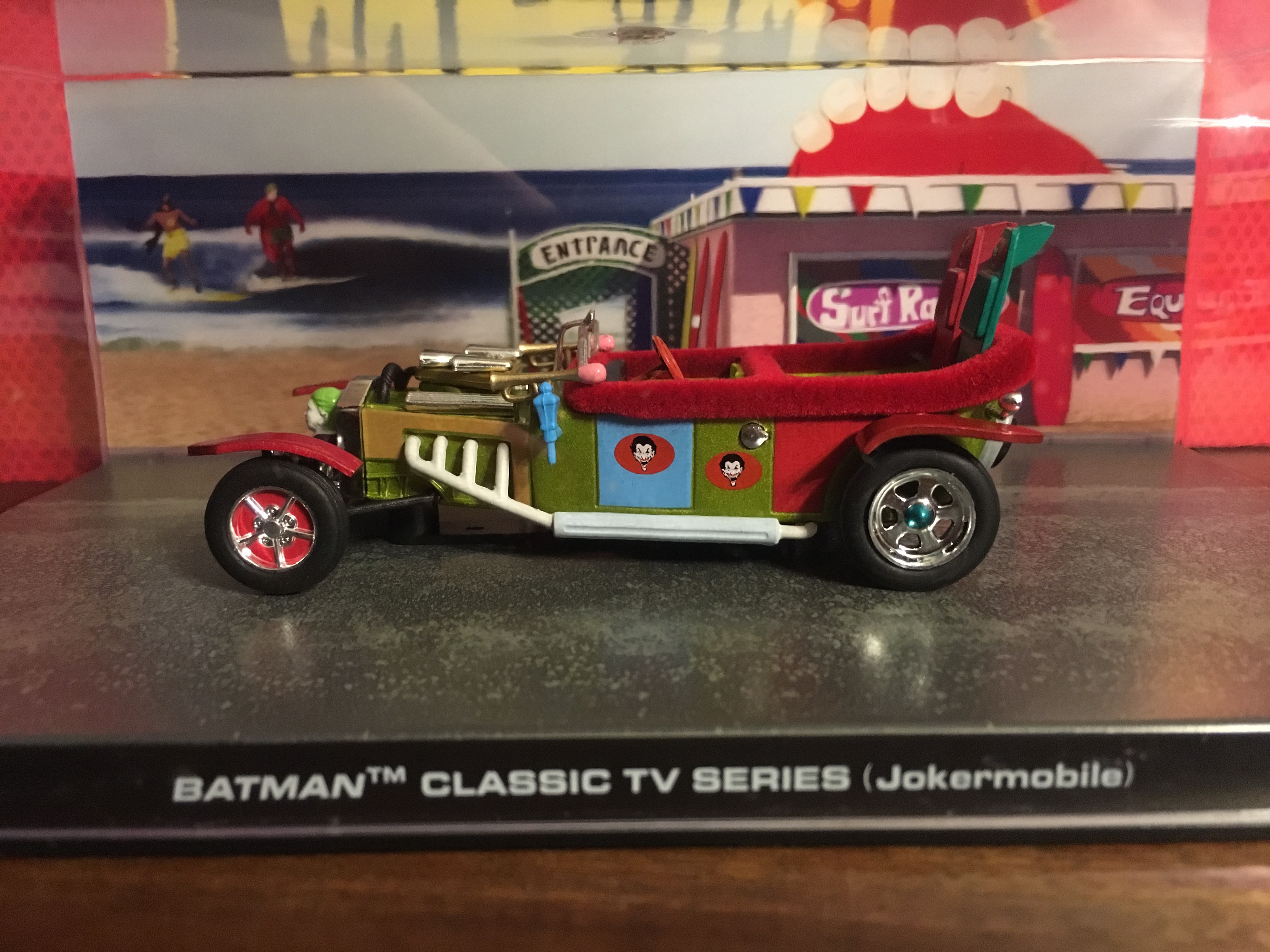 Eaglemoss’ Batman series is almost like an open secret. It’s right there in front of us and offers something for every Batfan, and yet its rarely in the spotlight (Batsignal?).

We aim to change that, because these are top-notch collectibles. (Stay tuned on that front, citizens.)

But for now, we want to give you a real inside look at #75 in the series, which just hit comics shops (and can be obtained online at various retailers and via subscription). 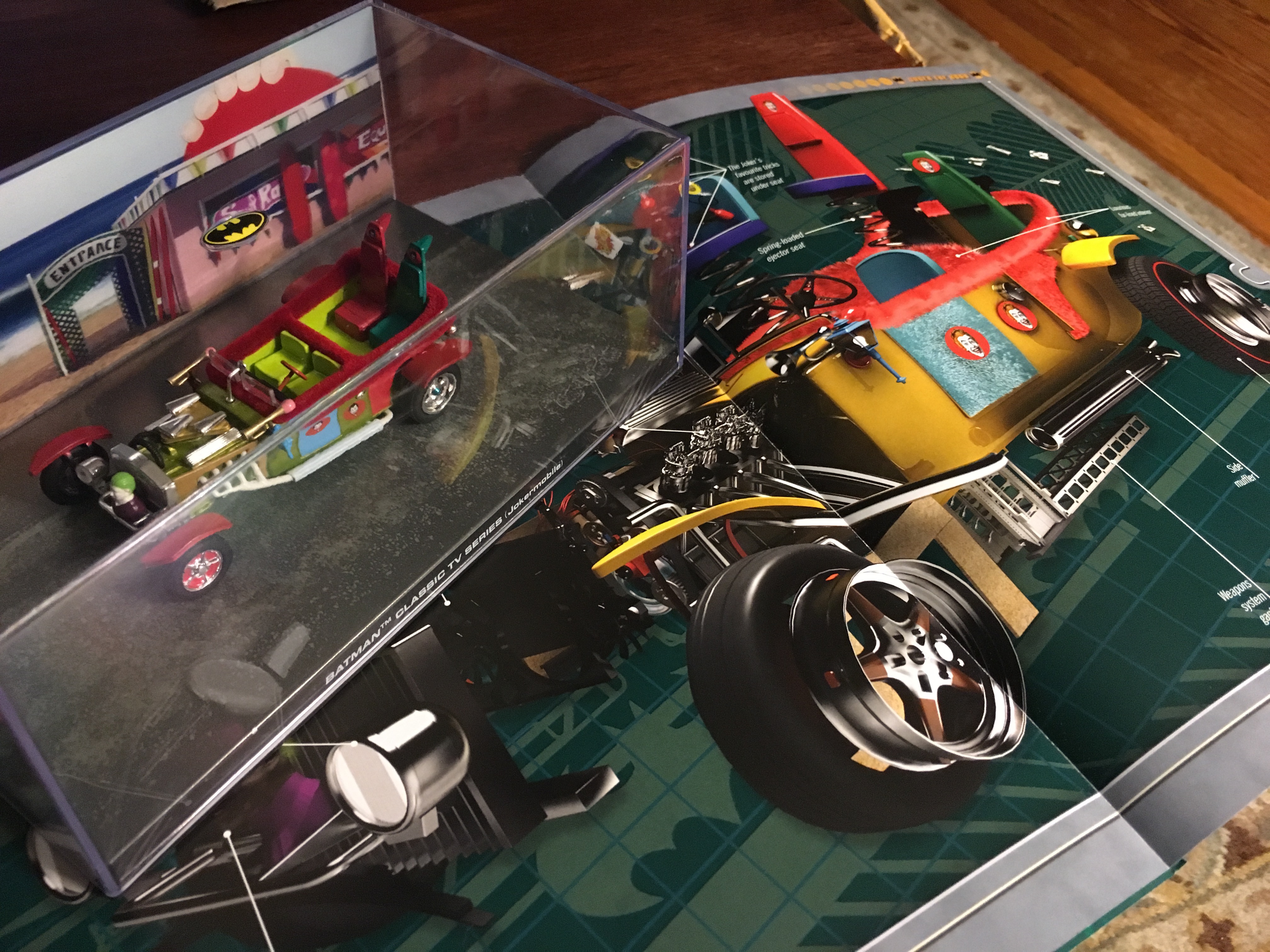 Every Batman Automobilia issue comes with a plastic-encased model and an informative magazine highlighted by fold-out vehicle schematics.

The Jokermobile model itself is wonderfully detailed, right down to its fur lining, front-grille Joker bust, and — since this diorama features scenery from the aforementioned Surf’s Up, Joker’s Under — surfboards. 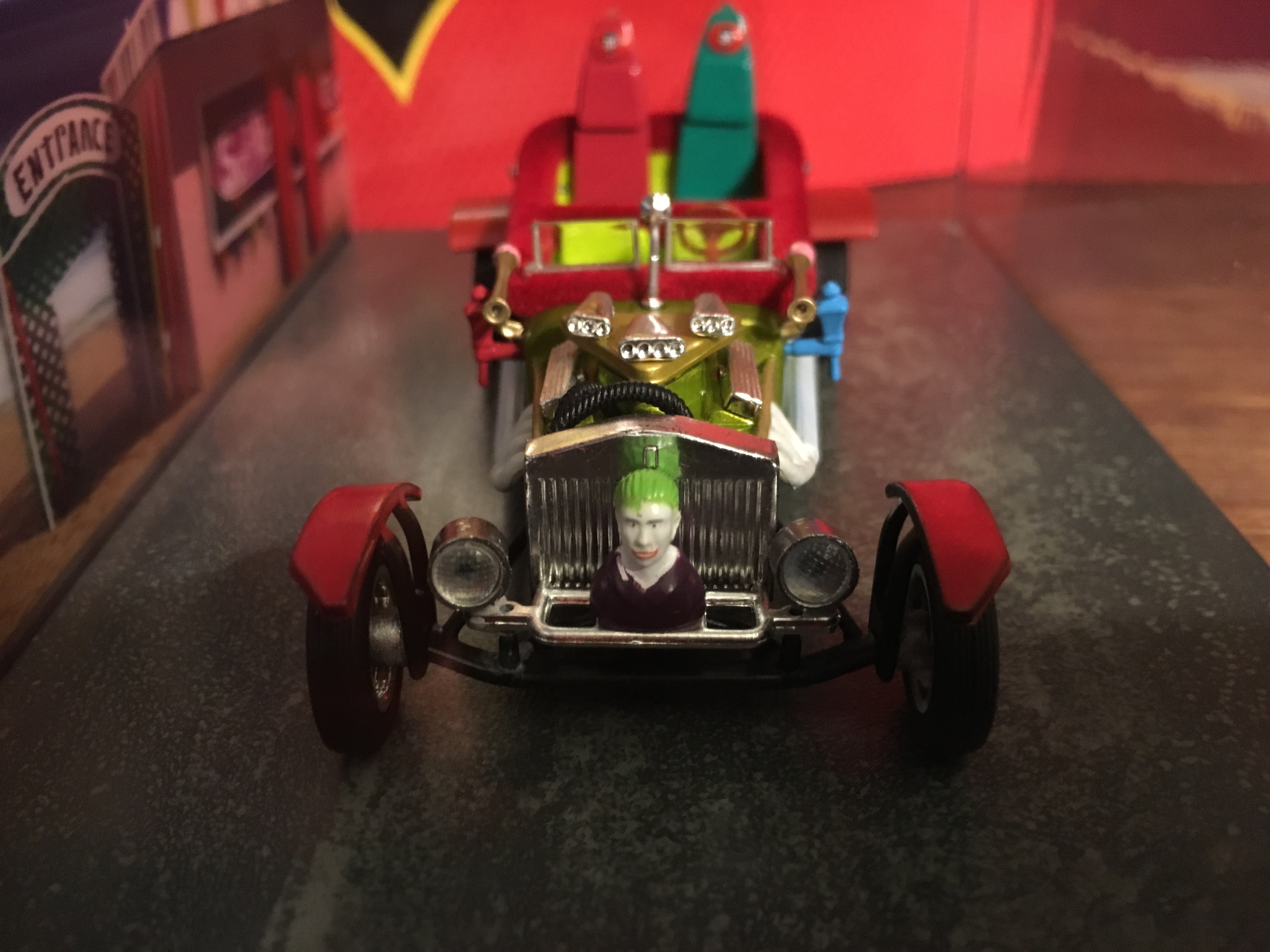 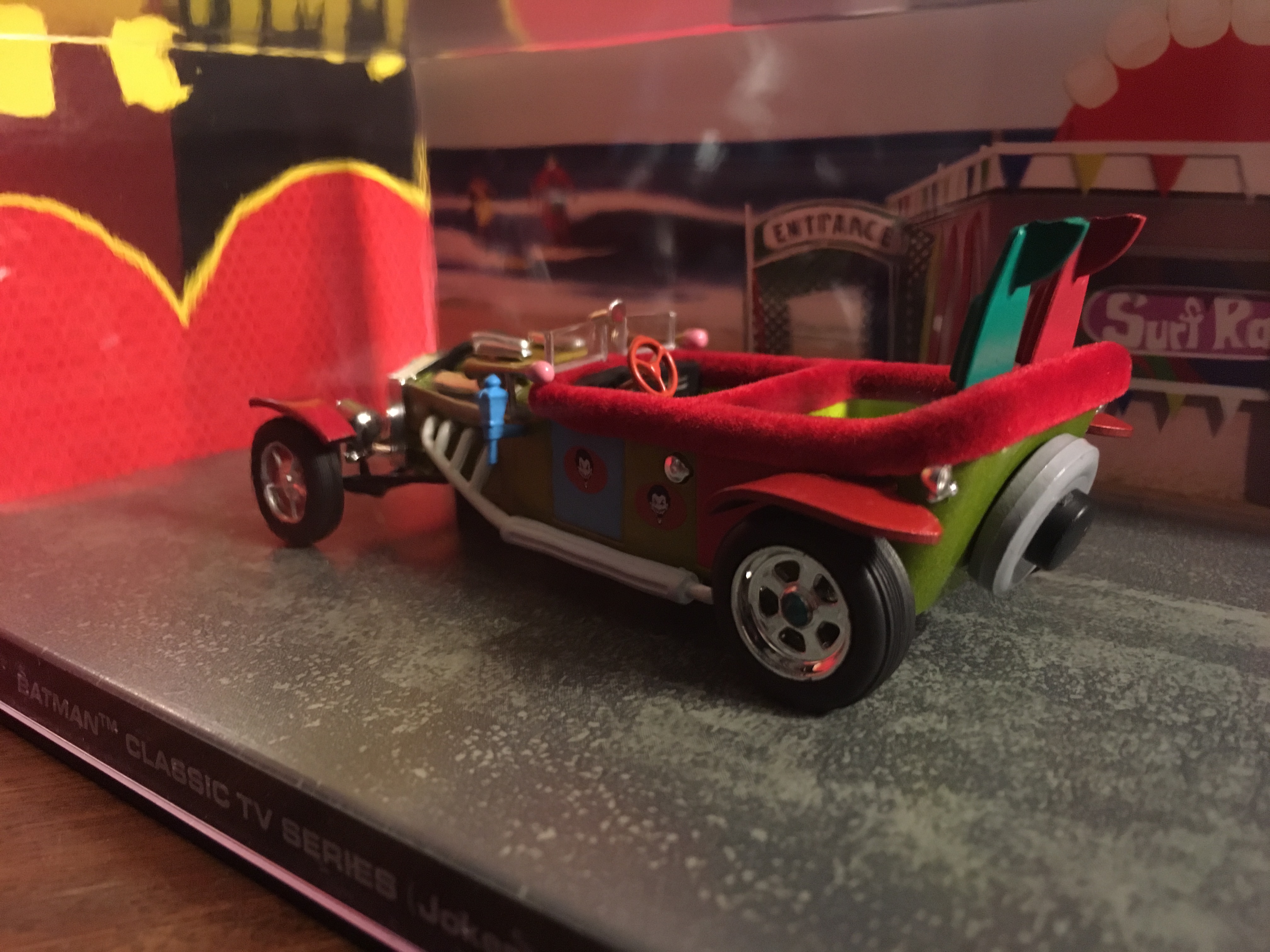 There’s also an Easter egg for you sharp-eyed Bronze Age fans: The emblems are the Clown Prince of Crime’s trade art from the 1970s. Since I’m a fanatic for that time period, too, I’m quite willing to overlook that they’re not Cesar Romero’s face. 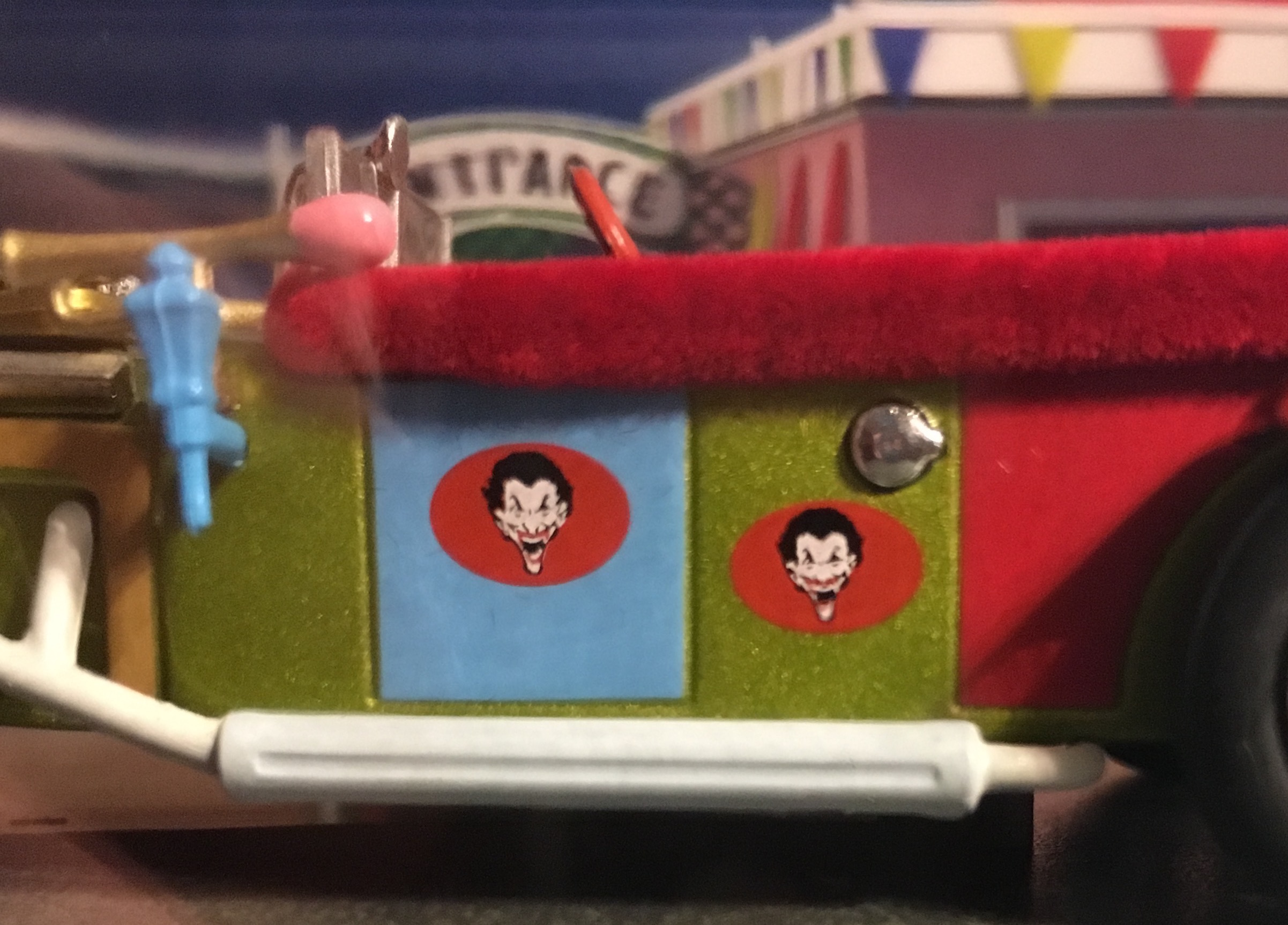 But Romero is there — along with Adam West, surfing off the beach in the background. The camera doesn’t properly capture the 3D imagery, but in real life it works.

The foldout that comes with the magazine is exceptionally detailed because you get the Jokermobile from multiple angles. The writers take liberties, as they usually do in this series, giving us what they imagine the vehicle is capable of, which is a nice whimsical touch.

And here’s the thing: The whole shebang costs about $20 or so. In this day and age of hyper-expensive, ultra-detailed collectibles, that’s a day at the beach.