EXCLUSIVE: It’s The Laughing Fish — ads and all!

For the longest time I was saying that it was a crying shame that Steve Englehart and Marshall Rogers’ profoundly influential 1970s Detective Comics run was out of print.

But now, after some twists and turns, their collaboration (along with inker Terry Austin) will finally come out in hardcover in Tales of the Batman: Steve Englehart this April. (Click here for the details.)

That’s the sundae — and the cherry on top is that DC in April will also be releasing the Detective Comics #475 Facsimile Edition as part of its 80th anniversary celebration of the Joker.

Dig this EXCLUSIVE LOOK at the solicitation info, which will be officially released shortly: 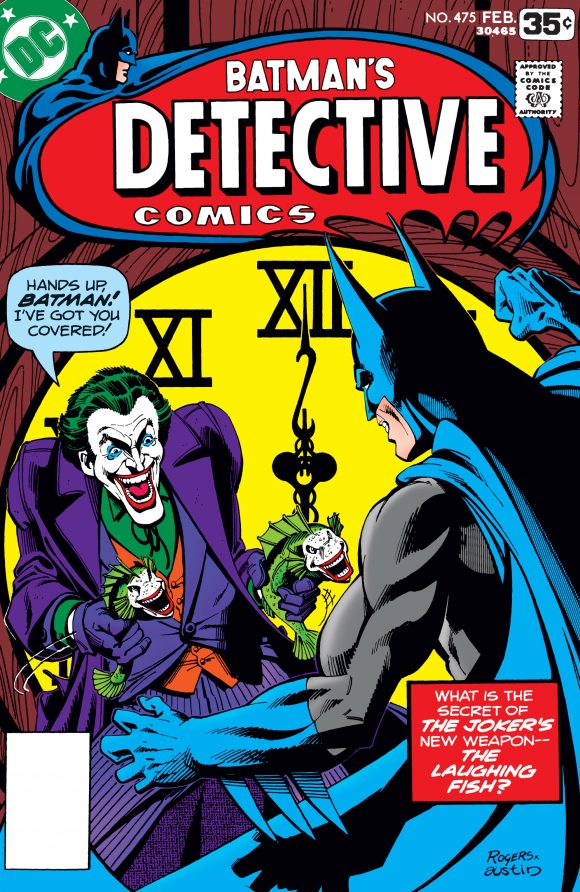 DETECTIVE COMICS #475 FACSIMILE EDITION
Written by STEVE ENGLEHART
Art and cover by MARSHALL ROGERS and TERRY AUSTIN
In one of his most off-the-wall schemes, The Joker gives the fish of Gotham City their own Joker grins—and then threatens to kill anyone who tries to stop him from collecting on his plan! Offered to coincide with The Joker 80th Anniversary 100-Page Super Spectacular #1.
ON SALE 04.29.20
$3.99 US | 32 PAGES | FC | DC

— So as it stands now, you can pick up the Englehart hardcover April 22 and the Detective Comics #475 Facsimile Edition — which comes complete with ads, letters and whatnot — a week later. Niiiiiiiice.

— Batman fans sure are getting spoiled by this line. So far, we’ve gotten Batman #181, Batman #232, Batman #251 and Detective Comics #359. We’ll also be getting Detective Comics #38 in March and DC Super-Stars #17, featuring Huntress’ origin in April. (Click here.) But wouldn’t it be cool if DC gave us Facsimile Editions of the entire Englehart Batman story, including the Walt Simonson/Al Milgrom issues? Not likely, but one can dream.

— Price comparison time: An unslabbed FN/VF copy of an original ‘Tec #475 — which was released in Nov. 1977 — recently went for $58 on eBay. The Facsimile Edition is a mere four bucks.

— Man, it’s great to see DC embracing this work again. So how about an Absolute Edition…