The HUNTRESS’ Origin Issue to Get Facsimile Edition Release

EXCLUSIVE: DC Super-Stars #17 gets re-released in April — with ads, bonus features and all!

A few hours ago, DC put out the news that it’ll be publishing the Catwoman 80th Anniversary 100-Page Super Spectacular in April — and you can click here for the details.

But in tandem with that, the publisher will also be producing the DC Super-Stars #17 Facsimile Edition, featuring the 1977 origin story of the Earth-Two Batman and Catwoman’s daughter, the Huntress.

Dig this EXCLUSIVE LOOK at the solicitation info, which will be officially released Friday: 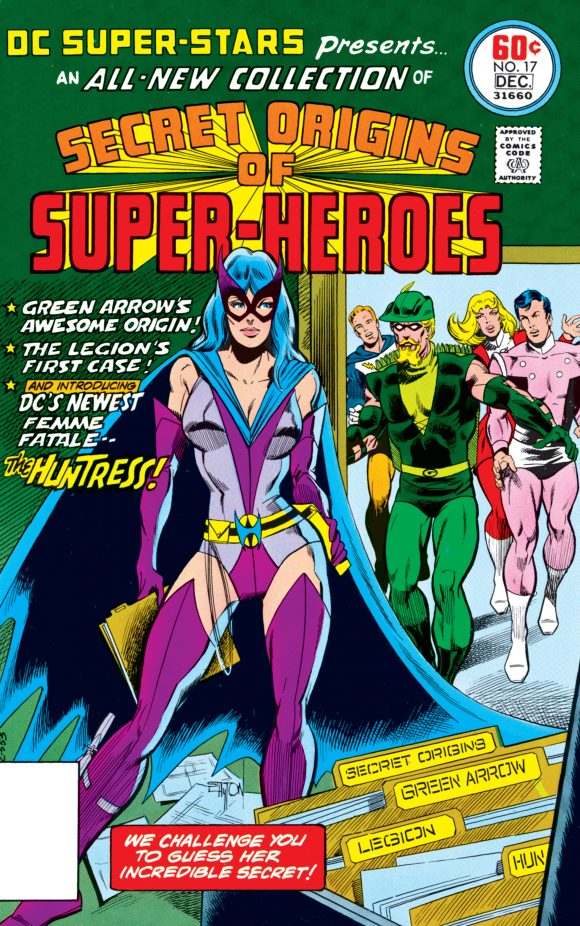 DC SUPER-STARS #17 FACSIMILE EDITION
Written by PAUL LEVITZ, DENNIS O’NEIL, and JACK C. HARRIS
Art by JOE STATON, BOB LAYTON, MIKE GRELL, JUAN ORTIZ, and others
Cover by JOE STATON and BOB LAYTON
This 1977 issue features the debut of Huntress, the untold origin of Green Arrow, and an early adventure of the Legion of Super-Heroes! Offered to coincide with the Catwoman 80th Anniversary 100-Page Super Spectacular #1.
ON SALE 04.08.20
$4.99 US | 48 PAGES | FC | DC

— The Huntress was created by writer Levitz, penciller Staton and inker Layton, and her first appearance was kind of a twofer: DC Super Stars #17 featured her origin/first solo story and All-Star Comics #69 introduced her to the Justice Society. Both issues came out about the same time, according to the Grand Comics Database.

— Since this is a Facsimile Edition, you also get the other stories: an O’Neil/Grell Green Arrow origin story and the Legion’s first case, by Harris and Ortiz. There are some cool features too, including Huntress concept art and — wait for it — a Wonder Woman Twinkies ad!

— Price comparison time: A high-grade, unslabbed copy of an original DC Super-Stars #17 recently sold on eBay for a little over $150. The Facsimile Edition will run you five bucks. That’s a deal.