INSIDE LOOK: The BATMAN #181 Facsimile Edition

As we told you back in June, the publisher on Sept. 4 will release the Batman #181 Facsimile Edition — featuring original ads, letters columns and whatnot — following Batman #232 and House of Secrets #92 in the new line.

And this one breaks fresh ground: It’s the first Silver Age edition and naturally it provides a different experience from the two Bronze Age issues we’ve seen so far.

Batman #181 featured the debut of Poison Ivy — the Facsimile Edition is being released in tandem with Harley Quinn and Poison Ivy #1 — in an endearingly hokey, decidedly of-its-time adventure by writer Robert Kanigher and the art team of penciller Sheldon Moldoff and inker Joe Giella ghosting for Bob Kane. 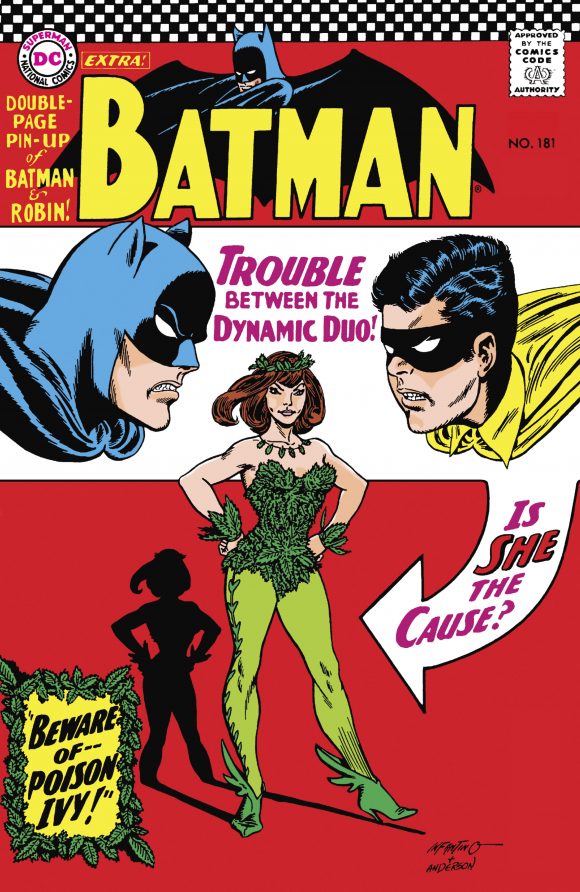 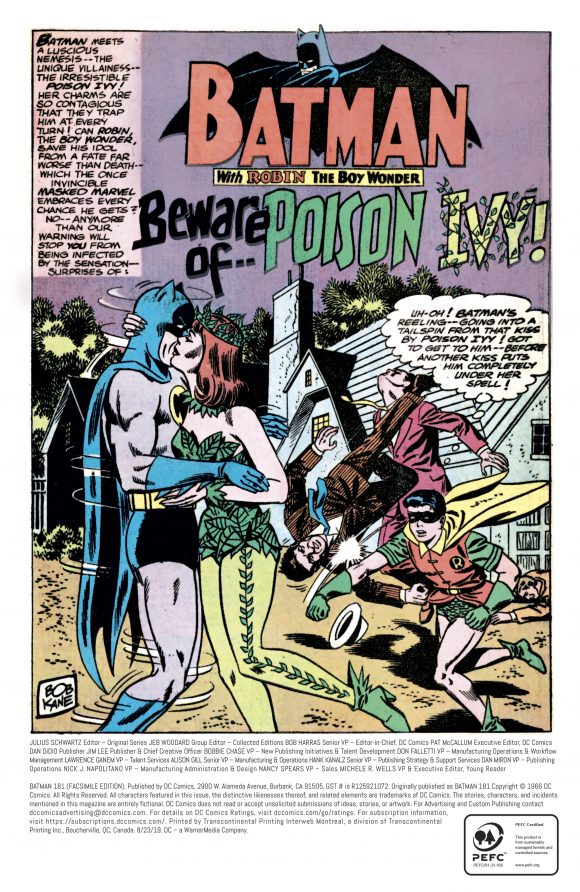 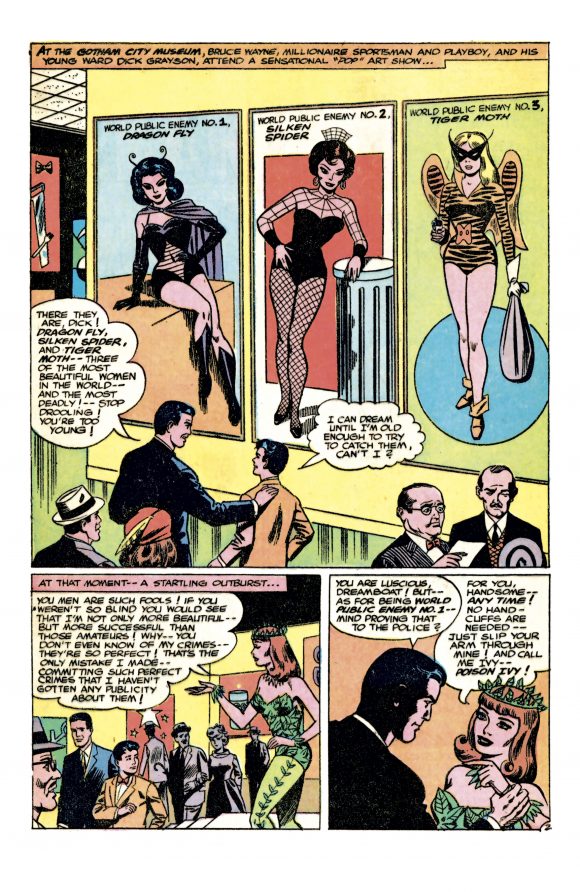 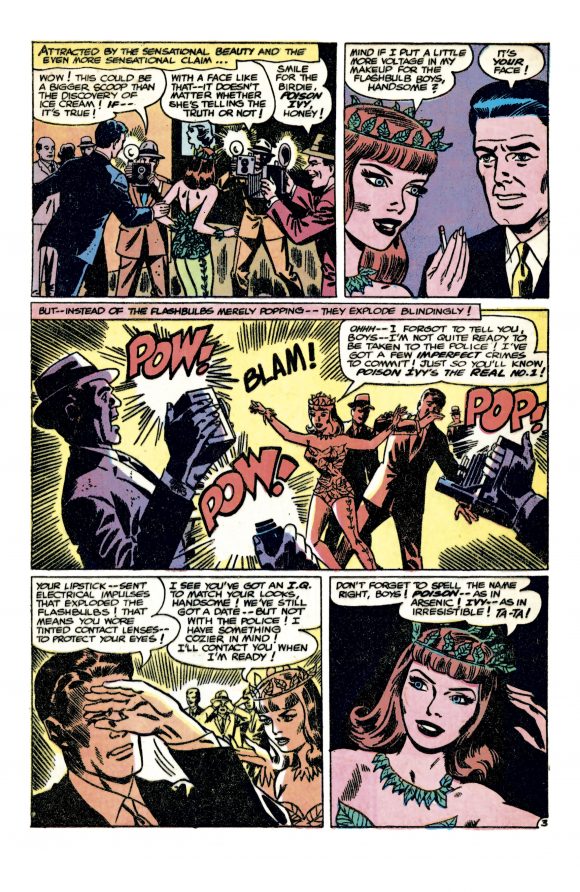 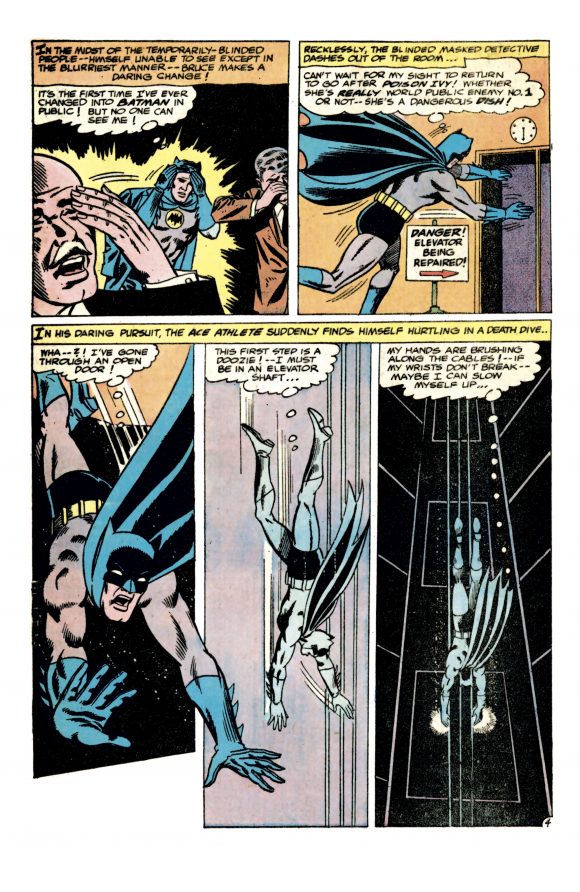 Poison Ivy’s first appearance may be the peg for this release, but the issue has so much more to offer. For one thing, there’s a back-up story starring the Mystery Analysts of Gotham City, a team of local sleuths to which Batman belonged, who were popular at the time.

More entertaining than that, though, are the letters column, with a missive by Mike Friedrich, who would soon join DC’s ranks as a Bat-writer; the late, lamented Direct Currents feature; and the ads — including one touting DC’s TV shows. (The issue came out in April 1966, as Batmania was in full flower.)

Check out this selection of pages: 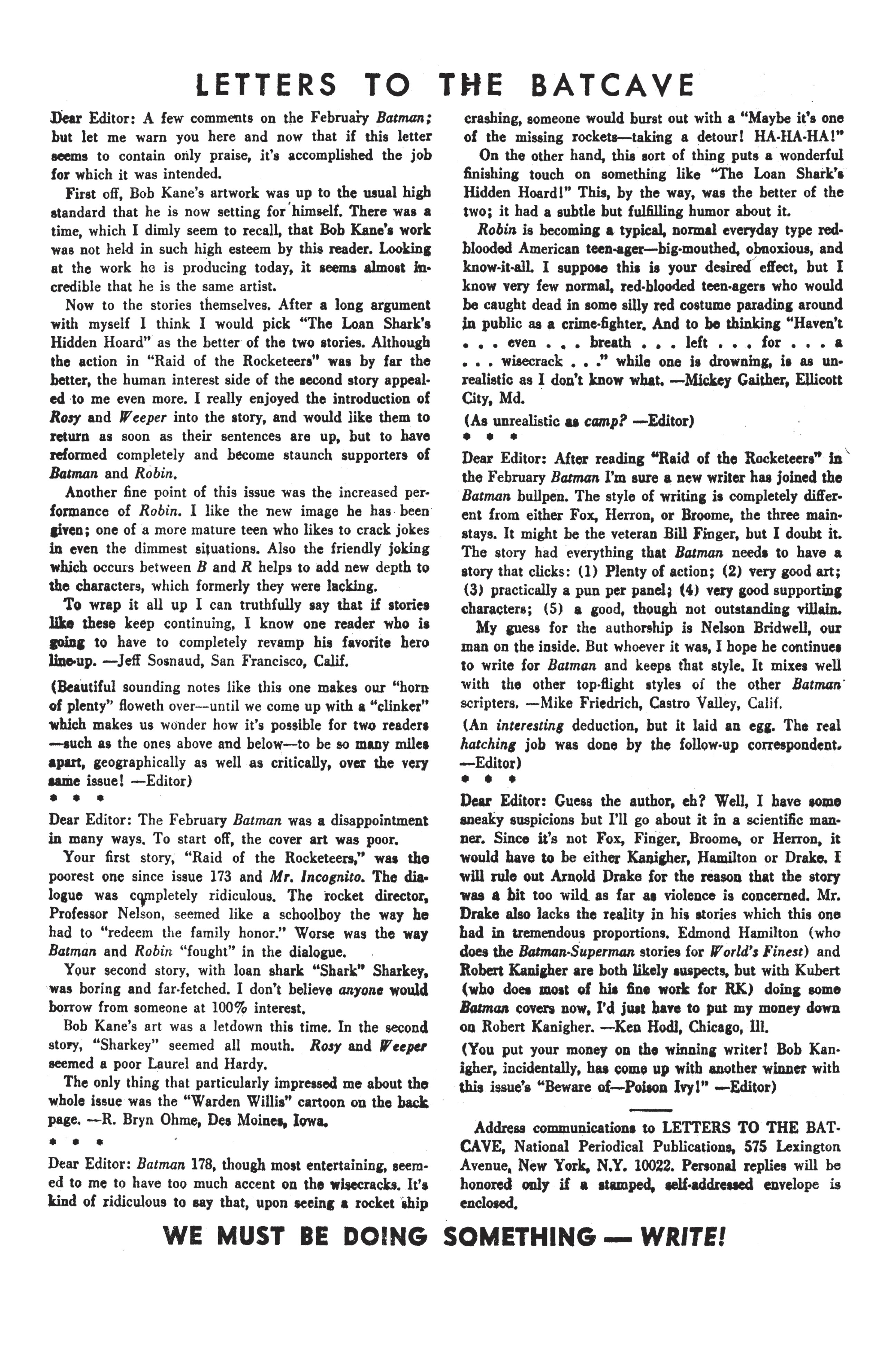 Blown up for your reading pleasure. 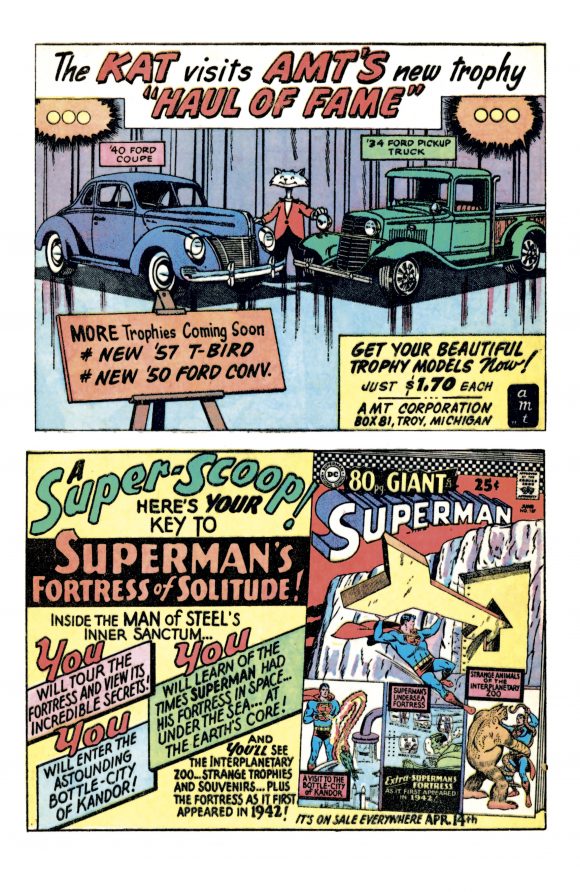 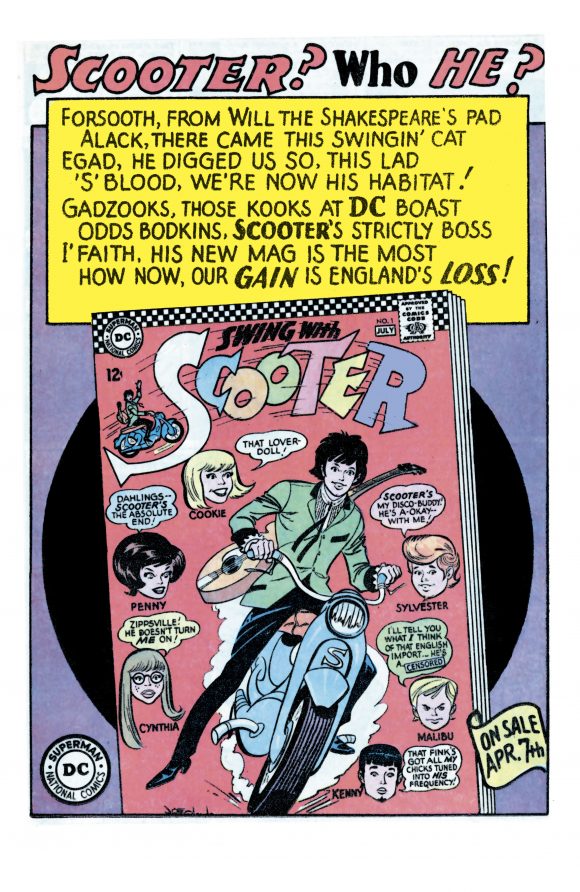 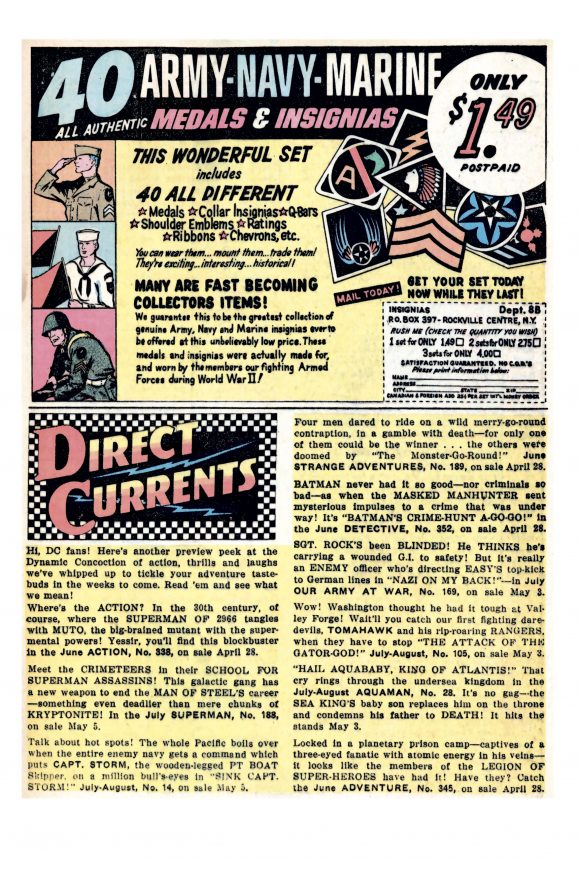 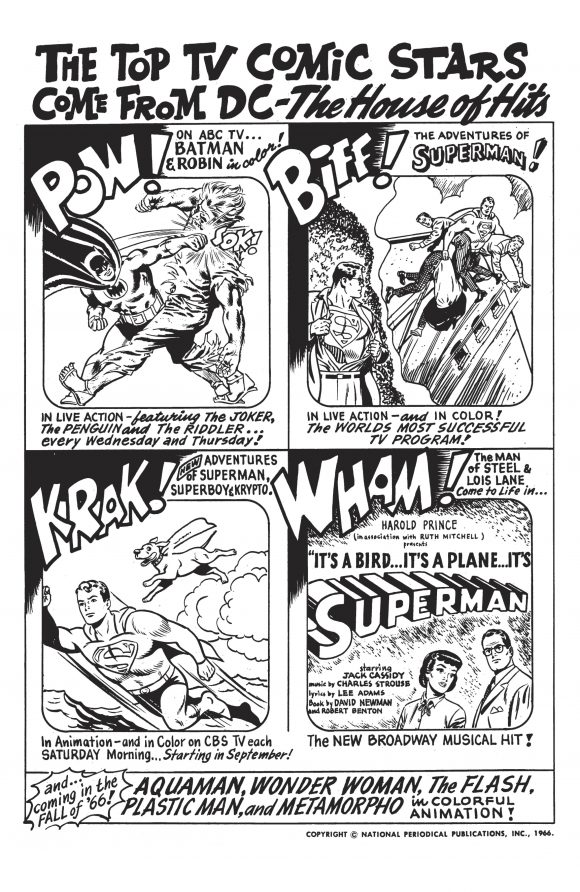 Best of all? The issue’s centerspread is a classic Batman and Robin pin-up by Carmine Infantino and Murphy Anderson that would become one of the enduring images of the era. (The figures themselves would be used as stock art for years to come.): 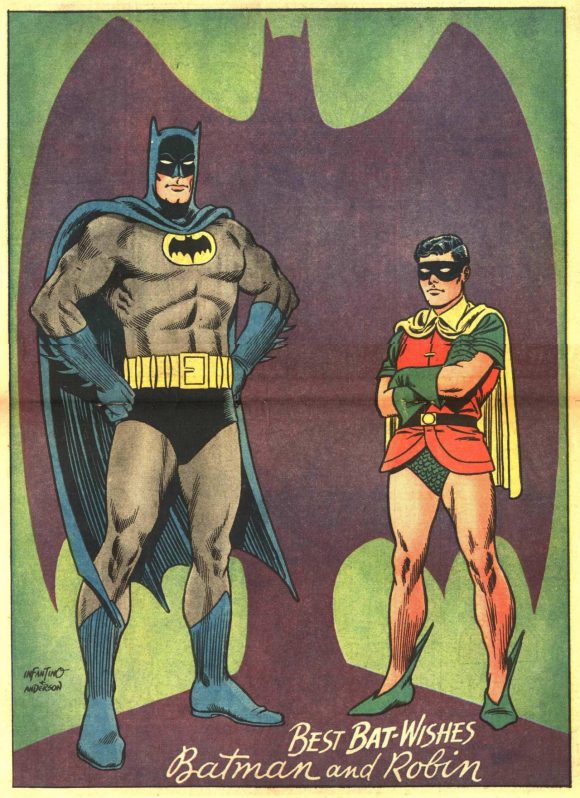 Plus, don’t forget: DC’s Facsimile Editions hew as closely as possible to the original production values: The cover isn’t card stock — it’s classic, glossy paper. And the paper stock inside is as near to traditional newsprint as you’re likely to get — rough and thin but sturdy. (The dimensions, though, are the same as modern comics, but that’s to be expected.)

All told, that’s a pretty groovy deal for $3.99 — especially when you consider that a high-grade, unslabbed original recently sold on eBay for more than $750. (Finding copies with that pin-up intact — high grade or not — can sometimes be a bit of a challenge, too.)

Now, the sad part: After three Facsimile Editions in three weeks, we have a bit of a wait for the next one — but it just happens to be the greatest single-issue story in Batman history: Batman #251 — The Joker’s Five-Way Revenge! by Denny O’Neil and Neal Adams — is due Oct. 2. (Click here for much more on that.)