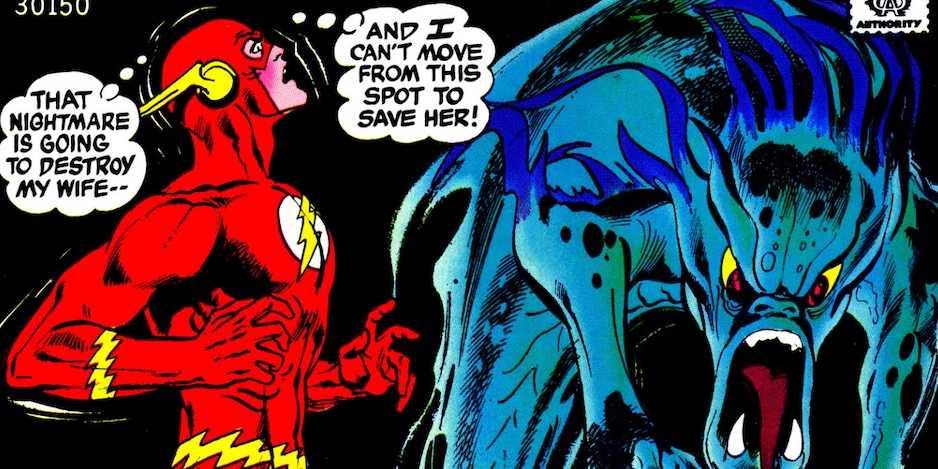 I didn’t realize until yesterday that we haven’t done a 13 UNDERRATED COVERS feature yet in 2021. Oh, no!

Well, let’s fix that quickly with 13 UNDERRATED FLASH COVERS from the Silver and Bronze Ages. This was a little harder than you’d think because The Flash has such a great history of eye-grabbing covers. But never let it be said that we shy away from the tough challenges.

The Flash #341. In the ’60s, The Flash was a gleefully silly series, with bright adventures and bright villains. By the ’80s, Barry Allen had become one of DC’s more troubled figures, a relatively early signal that mainstream comics were headed toward darker times. This cover conveys that perfectly and I like that Carmine Infantino worked it at both ends. 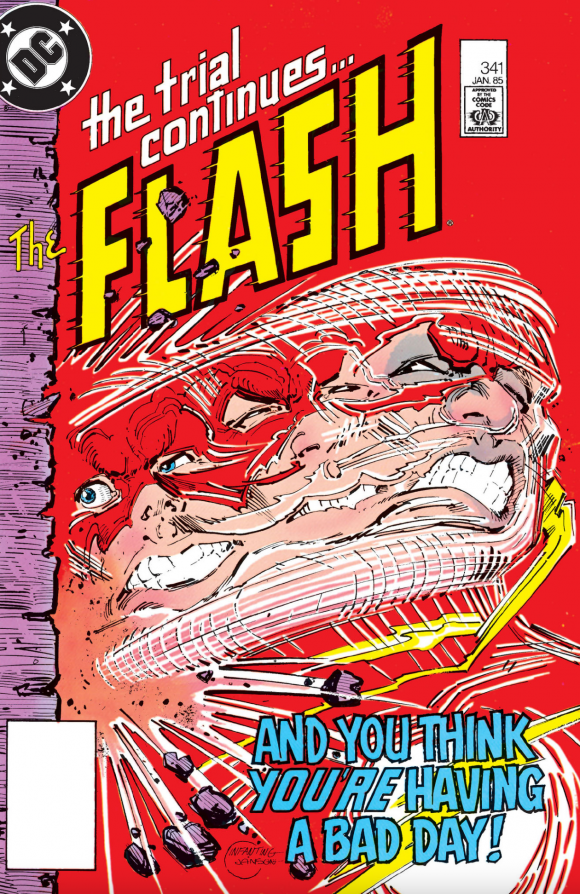 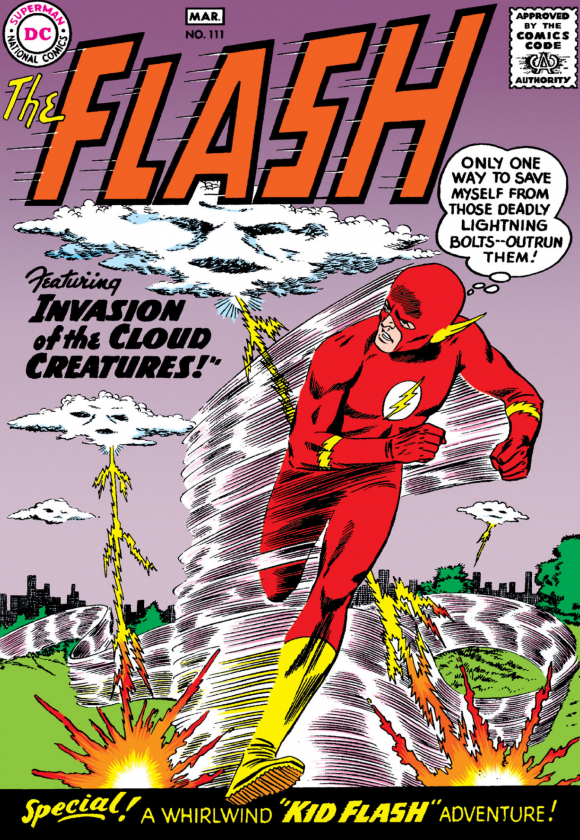 The Flash 194, DC. I’m not sure what Freudian message was hiding here but man, DC was obsessed in the late ’60s and early ’70s with superheroes facing terrifying marriage prospects. It really was a thing. Bonus points for Neal Adams’ stereotypical Devil ready to perform the profane ceremony. 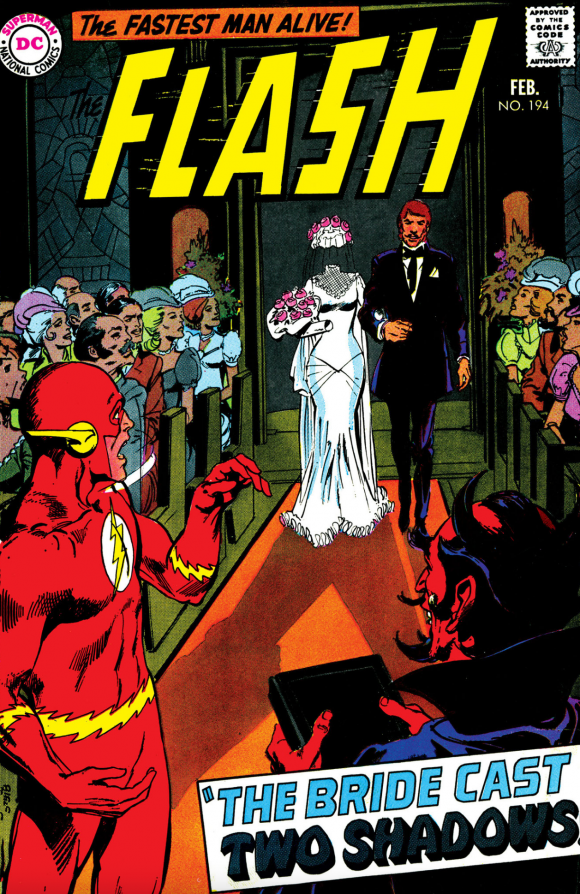 The Flash #182. Have you ever noticed that when superheroes lose their boots or shoes, they’re almost never wearing socks? That’s weird — especially when you’re talking about the Flash. Imagine the blisters! And the smell! (Sorry.) 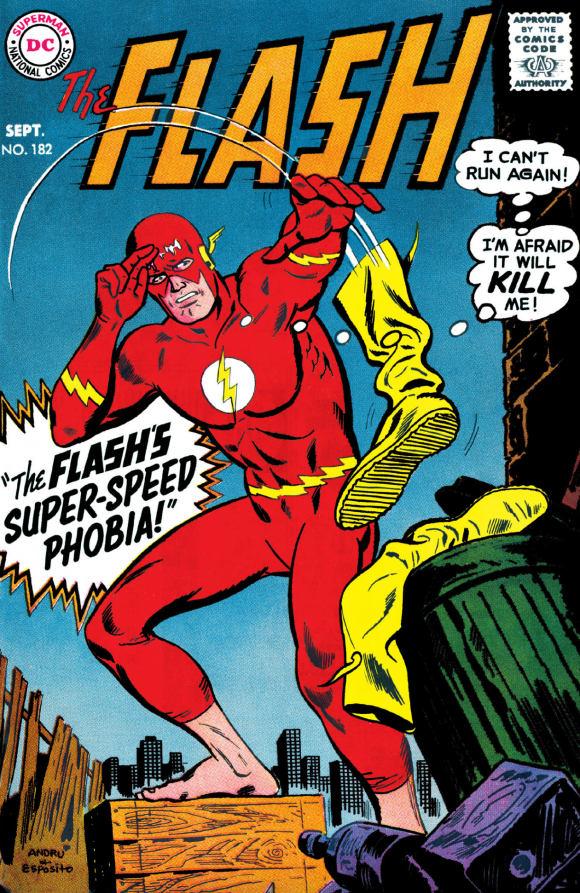 The Flash #125. LOVE the tricolor logo. But I gotta say one of the smartest things DC ever did was update Kid Flash’s costume 10 issues later. 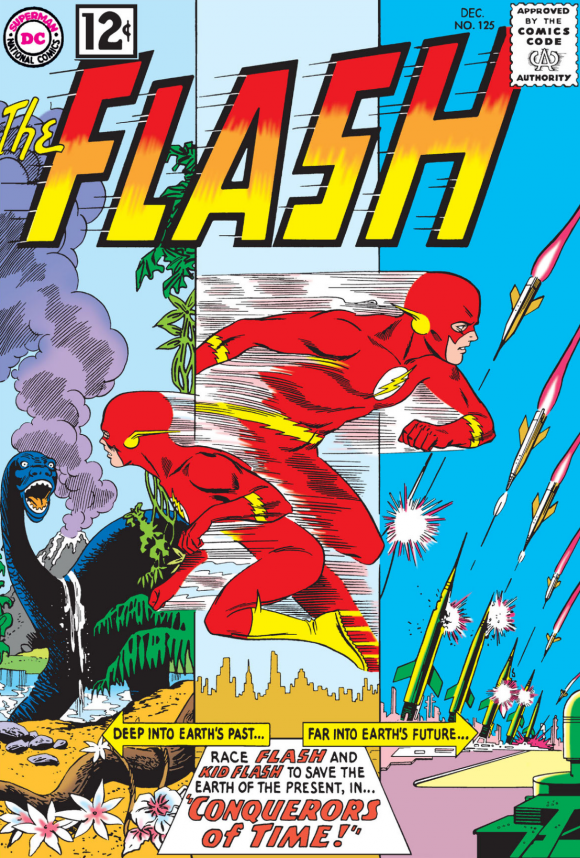 The Flash #232, DC. The thing about the 100-pagers is that they were all about the layout because there wasn’t enough room for a single dominant image. I think this is an example that really works, because you still get a solid horizontal image that’s suitable for the Scarlet Speedster’s adventures. That and the purple really works as an unexpected contrast color. This is one of the few Flash comics I had as a kid and I really dug it. That lead story by Cary Bates and Irv Novick was creepy and cool. (Bonus: Big Flash Head sighting!) 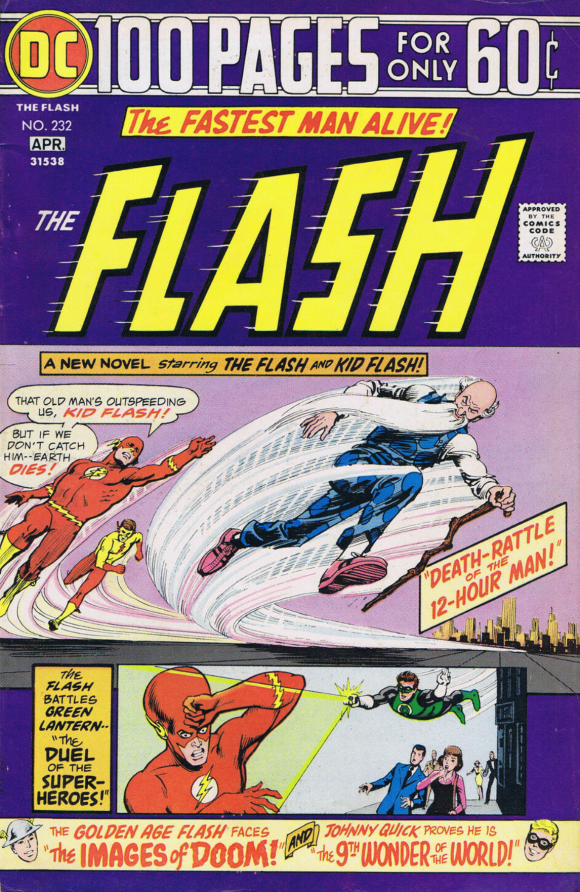 The Flash #349. See the first cover above. This even predated Miller and Mazzucchelli’s Daredevil: Born Again by a few months. 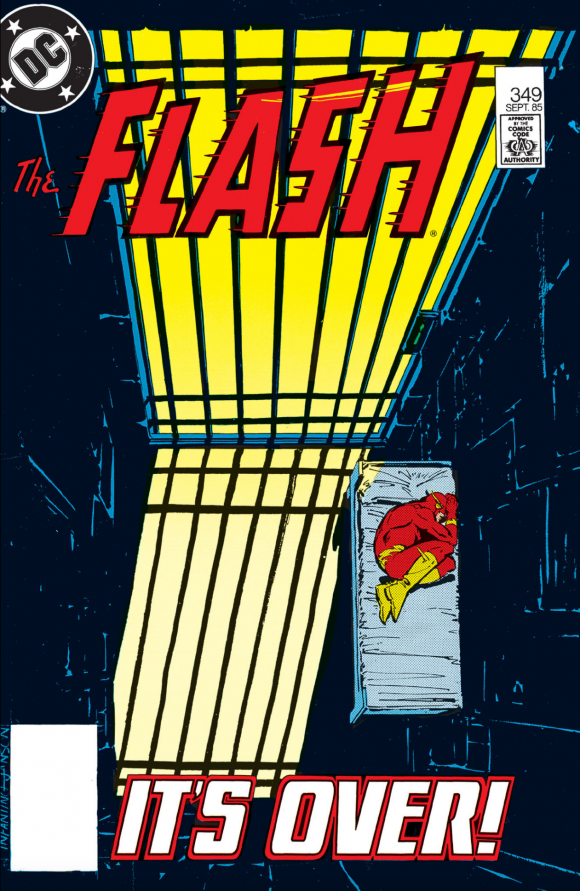 The Flash #162. There was this boardwalk ride when I was a kid in New Jersey called the Wacky Shack. It was one of those “haunted houses” you ride through. Scared the bejeezus out of me. So, I’m with you, Flash! I’m with you! 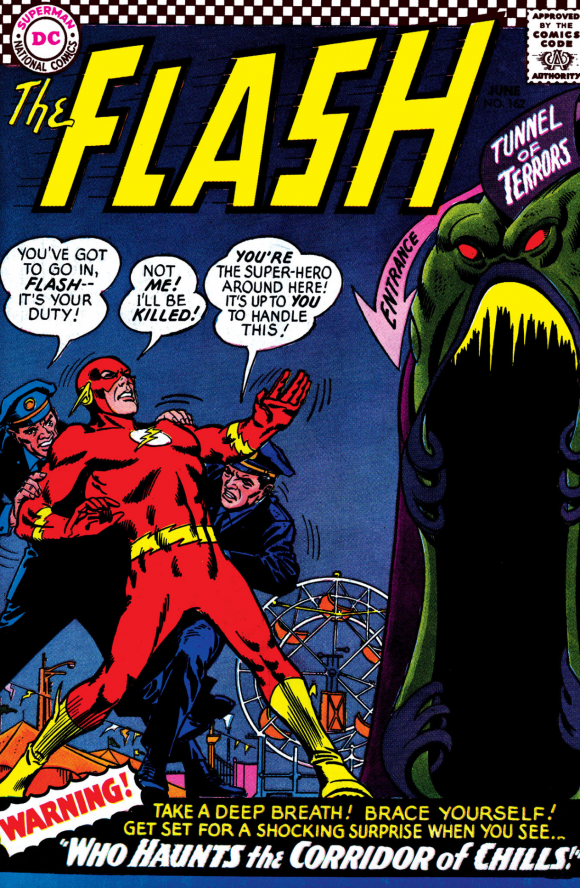 The Flash #312. It’s an old Flash cover trope to have our hero besieged by two villains with opposite powers. Think Heat Wave and Captain Cold. Here’s it’s two Heat Waves — however will Barry survive? 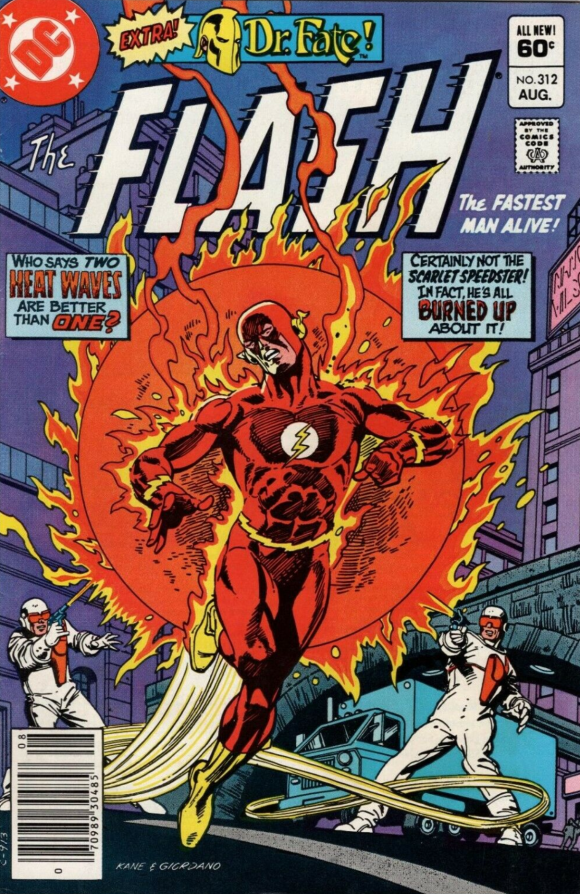 The Flash #186. DC really did enjoy injecting horror in their superhero titles as much as they could as the Silver Age crossed into the Bronze Age. 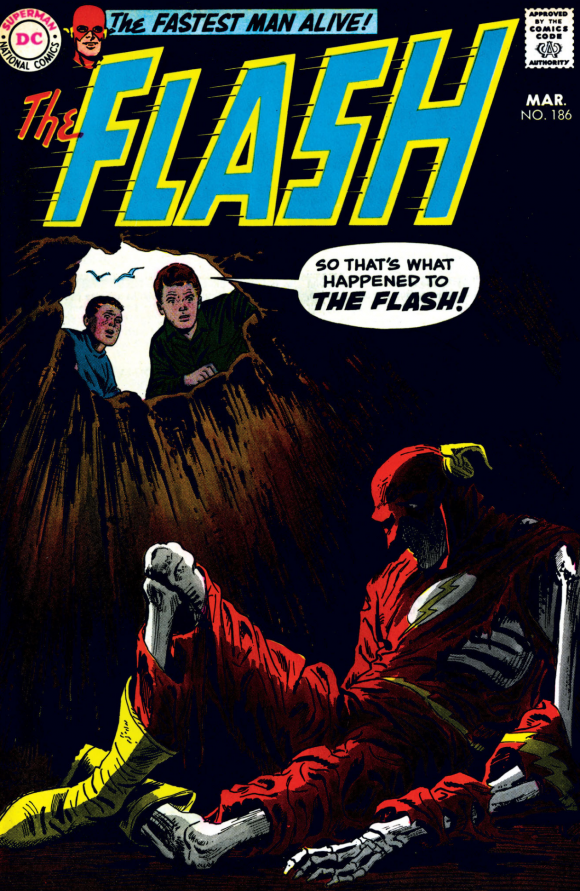 The Flash #262. Rich Buckler doing his best Gil Kane. Watch out for superheroes flying through the air! 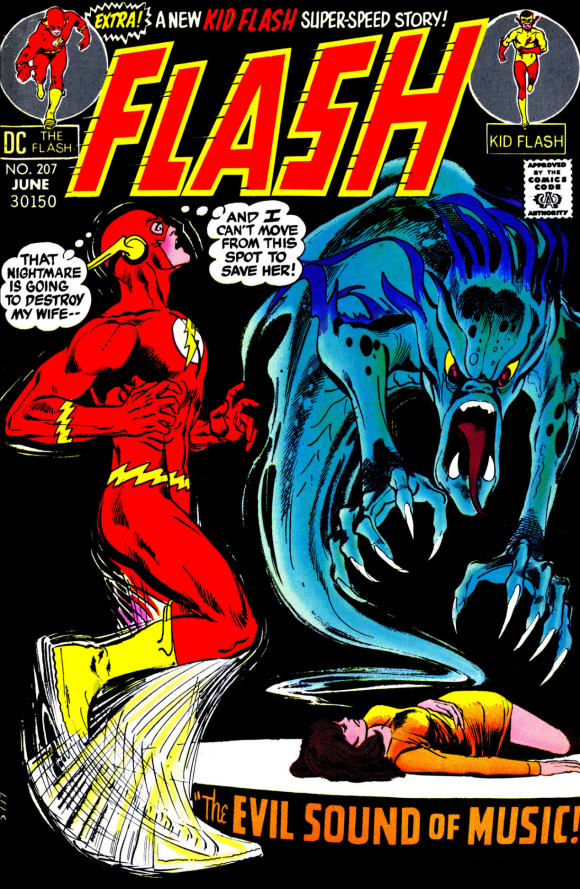 The Flash #212. So, the kid’s watching Filmation re-runs? Groovy.