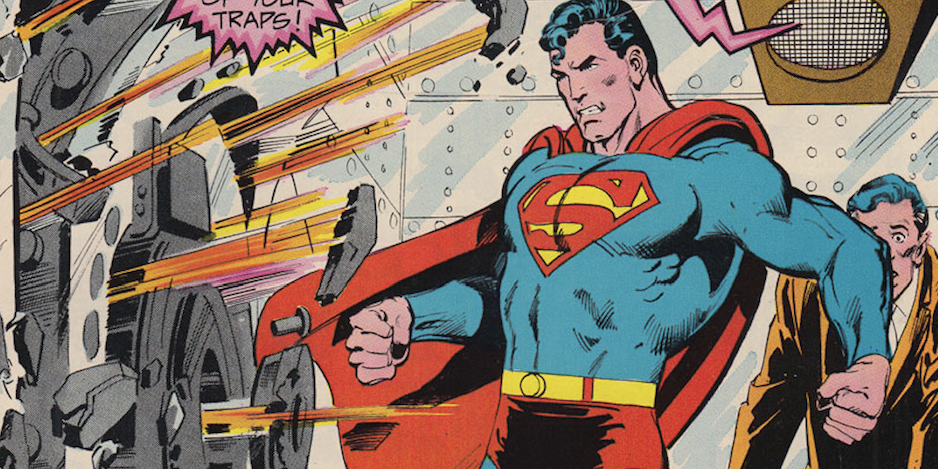 I didn’t realize it would take this long, but we’re back now with 13 UNDERRATED ACTION COMICS COVERS.

These are all from the Bronze Age, a period that, all things considered, stands relatively unheralded compared to the bizarre ’60s or John Byrne’s takeover in the ’80s. (If you’re a bona fide Superman fan, you’re likely to think differently. Still, I’d argue — strenuously — that Superman’s high point in the ’70s was the movie.)

Anyway, dig these groovy 13 COVERS, in no particular order:

Action Comics #425. I’m sure Superman die-hards are very familiar with this one but it strikes me that this lovely cover by Nick Cardy should have been a much bigger deal. 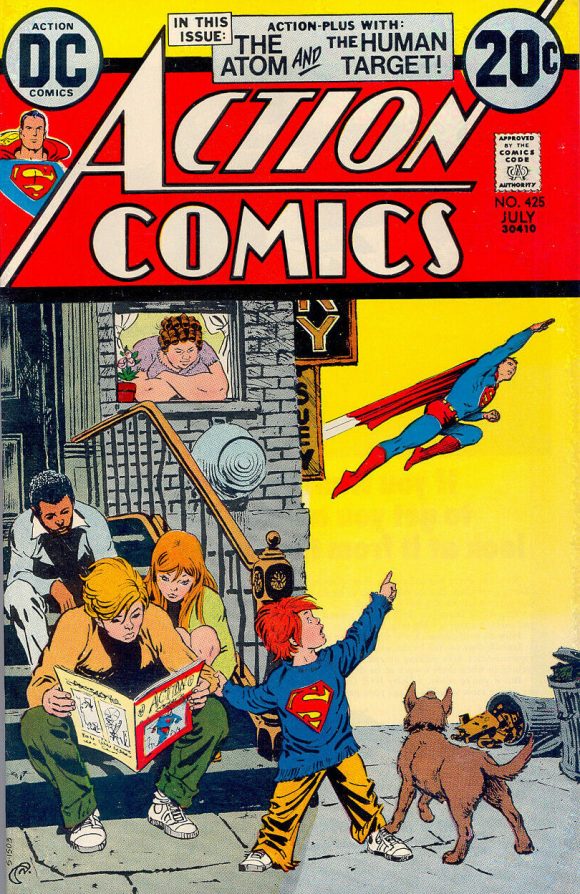 Action Comics #488. Boy, this was an era of weak adversaries for the Man of Steel, wasn’t it? Look at this guy! Why the pointy mask? And the big “MW” on the chest! But it’s fun and exciting, which is all that really matters. 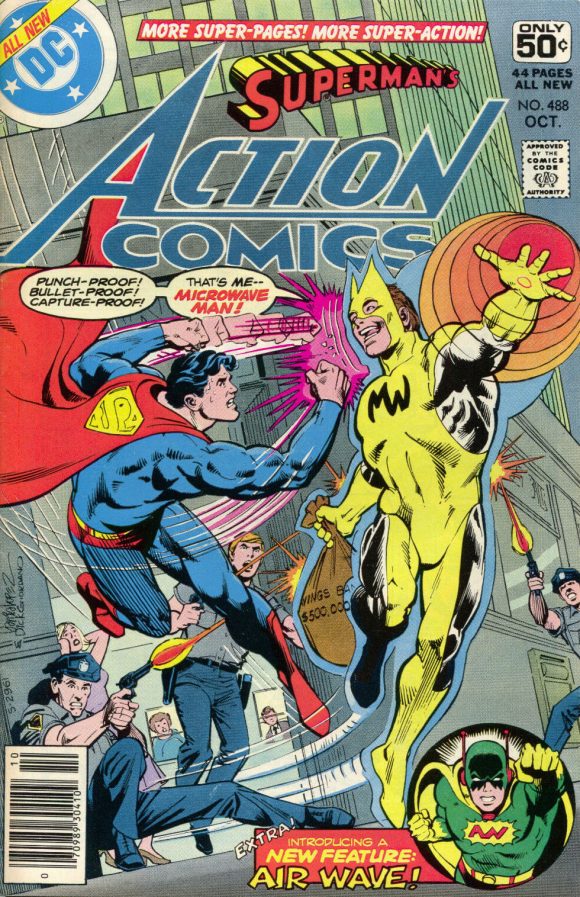 Action Comics #494. Great borderline horror cover by Jose Luis Garcia-Lopez. It’s not shadowy but both the green soldier and the utter terror on Lois’ face and in her body language make this a really effective piece. 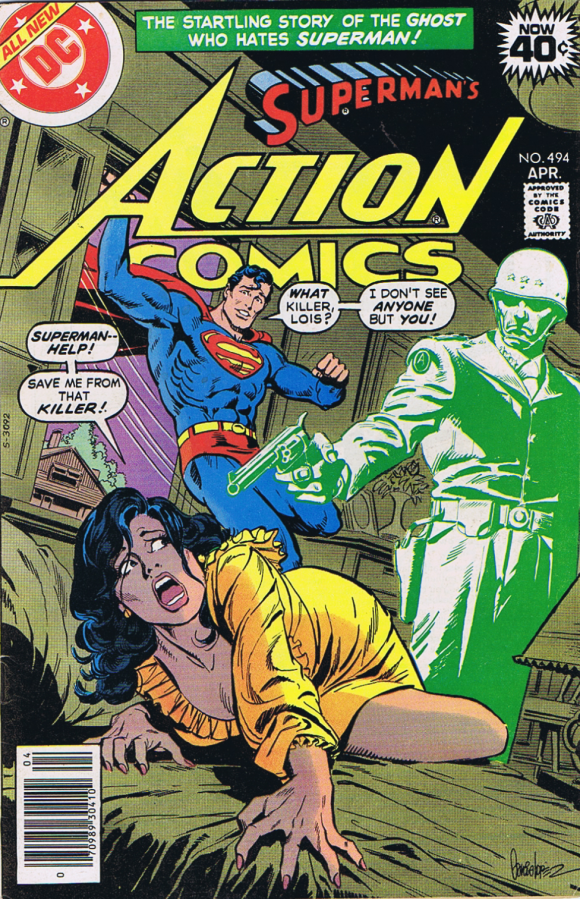 Action Comics #413. I remember seeing this one in a house ad in the ’70s and thinking “What in the world could hurt Superman like that?” Man, I love Nick Cardy. 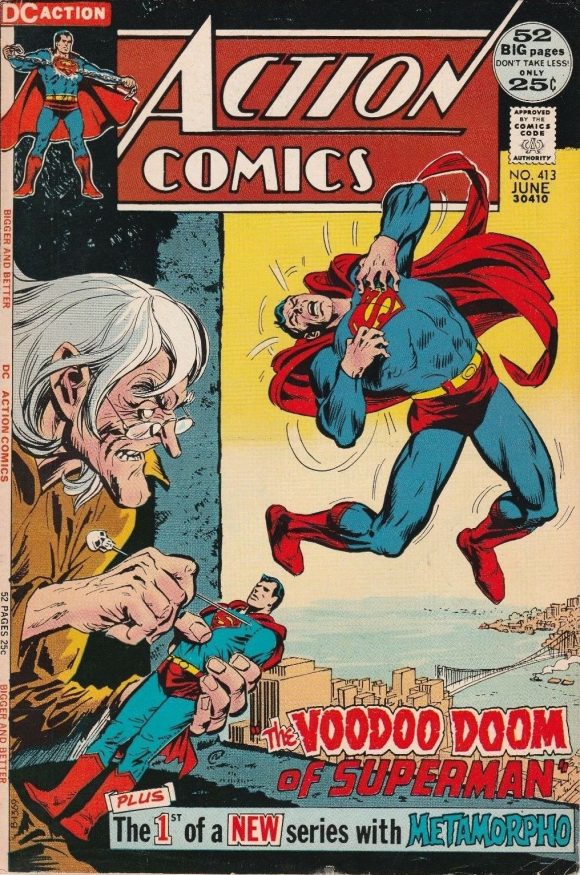 Action Comics #526. Pretty much a straight-up punch-out cover but Andru frames it so well and the lines, inked by Giordano, are so, so clean. The clock underlay adds tension and the Metropolis background gives a sense of scope. Another forgettable bad guy (he looks a lot like Wildfire), but you can’t have everything. 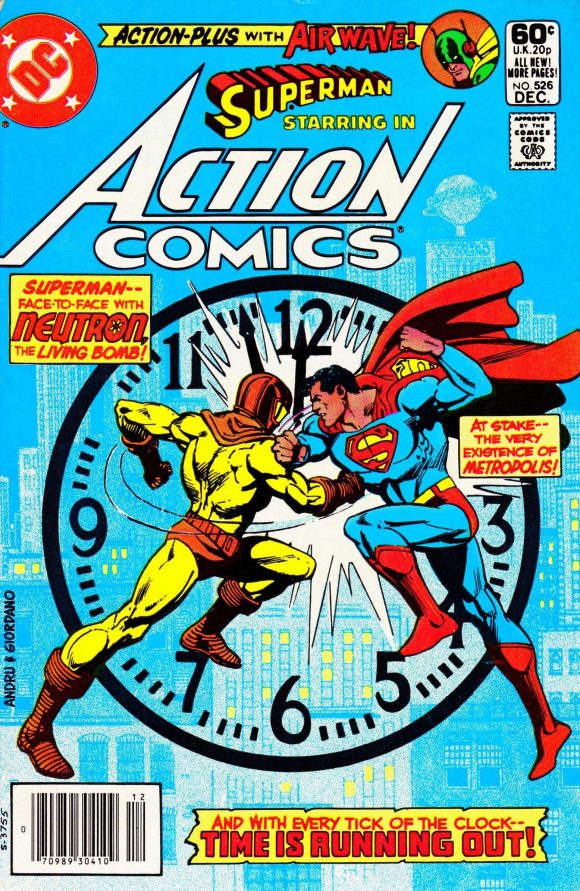 Action Comics #479. You’re right, generic bald guy who kind of looks like Julius Schwartz: I never thought anything could hit Superman that hard either, but Rich Buckler and Bob Oksner bring it. The upshot camera angle works really well, especially since it emphasizes the imminent collapse of the building behind the Man of Steel. 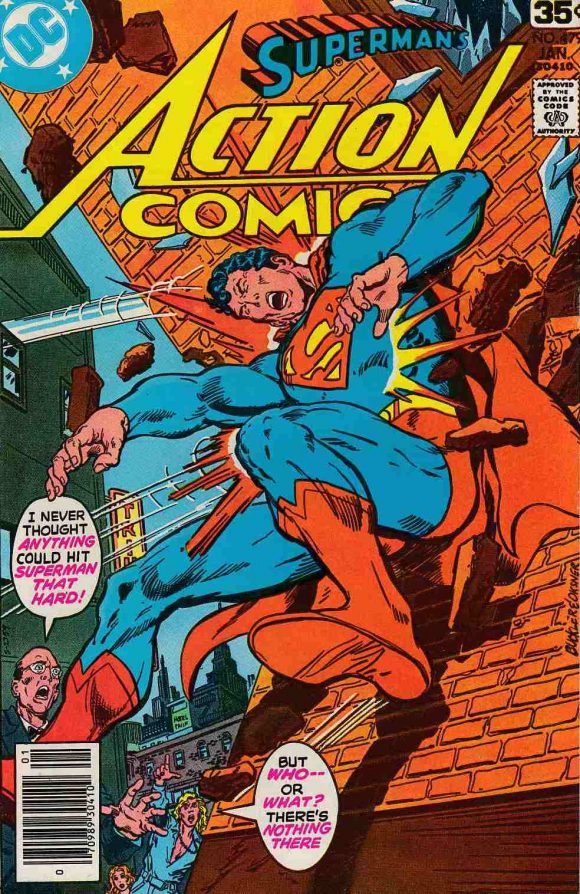 Action Comics #456, DC. OK, this isn’t really underrated at all. You’ve probably seen it a bajillion times. I just wanted to include it because it was such a craven attempt to cash in on the Jaws craze. You can’t help but laugh. 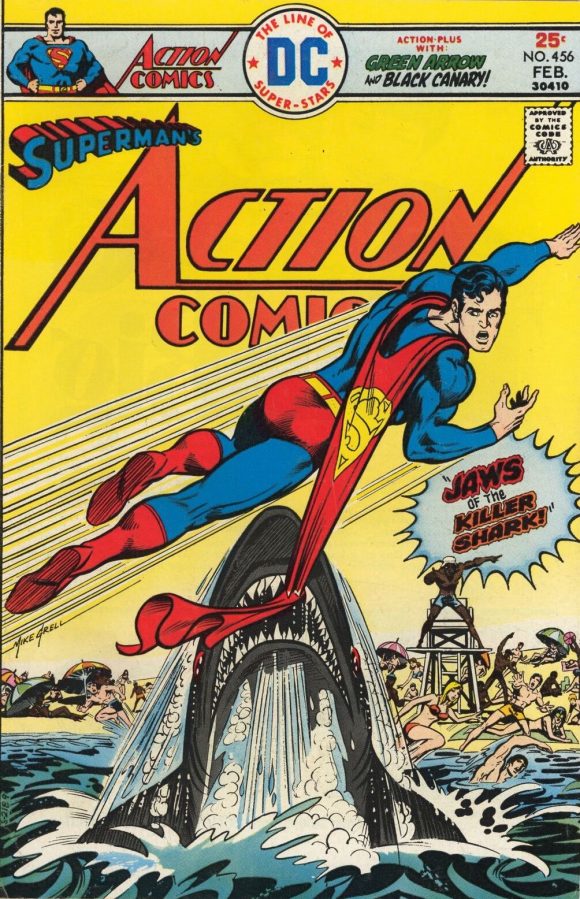 Action Comics #574. It’s no longer a novelty to see such a somber Superman cover but this one really stands out, given its time period. I wish I knew who the colorist was because damn. (If you know, post it in the comments!) 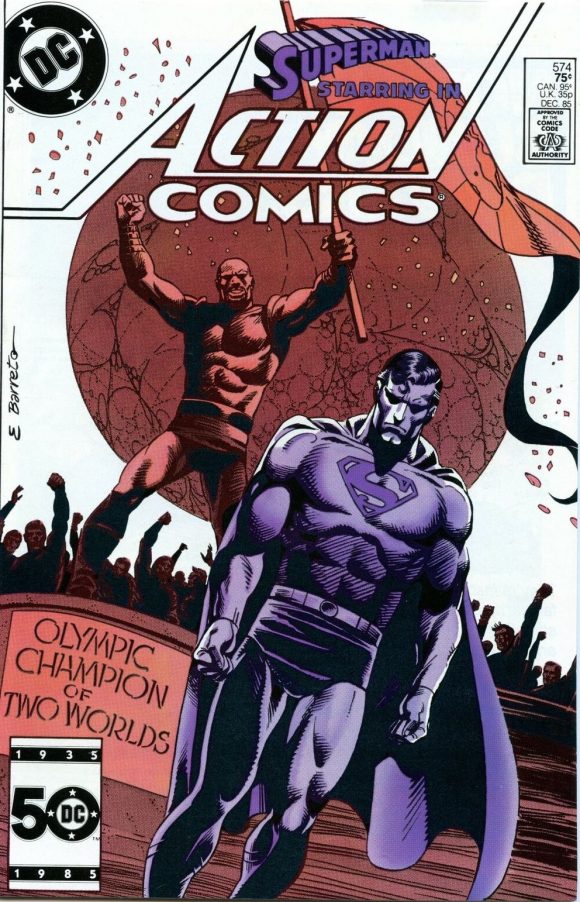 Action Comics #518. Not really that great a cover but I wanted to take a moment to appreciate just how well Andru drew Superman in flight. It’s an underrated talent and Andru always gave the Man of Steel such a sense of movement from angles like this. Very cool. Very cinematic. 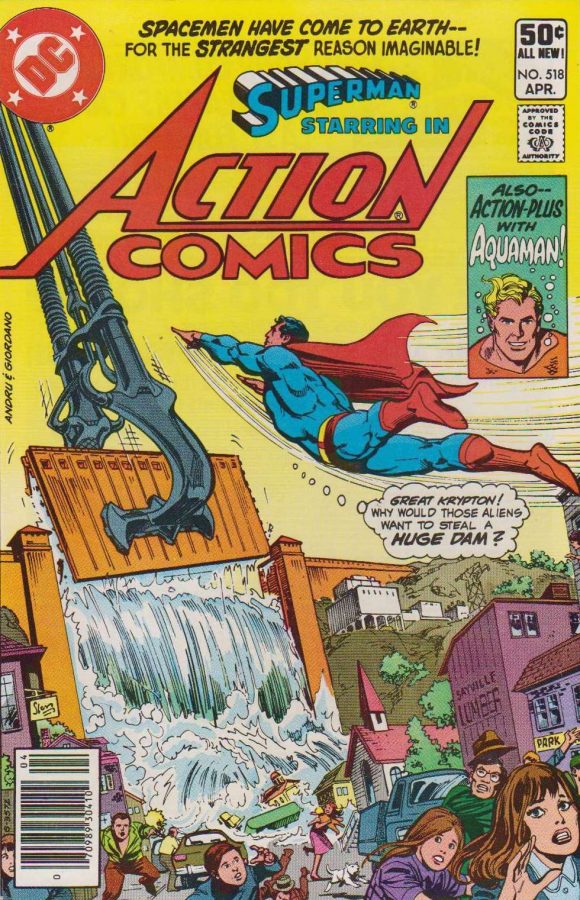 Action Comics #412. I’m a sucker for subterranean worlds that have their own light sources and clouds. Not to mention a T. Rex in the distance! 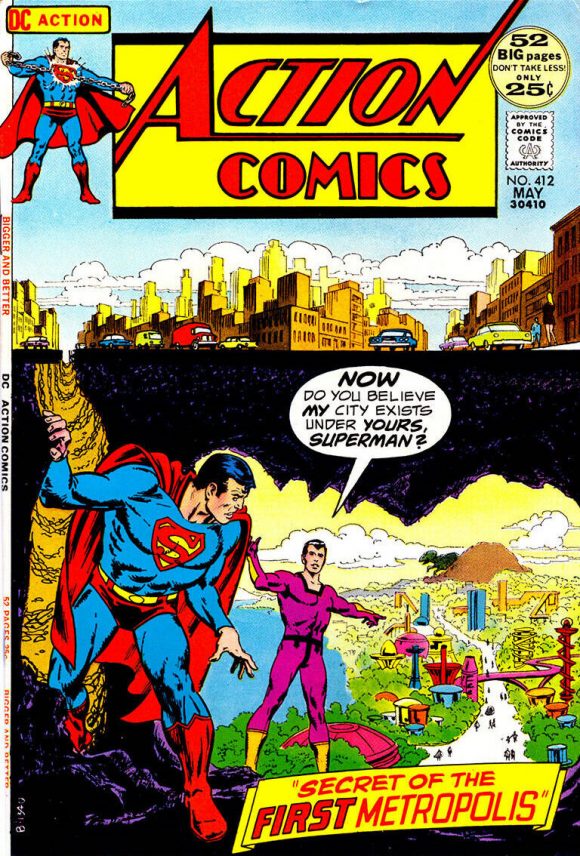 Action Comics #548. As far as I know — and correct me if I’m wrong — but this was the first time the comics started to mimic Superman: The Movie’s crystalline Phantom Zone window. 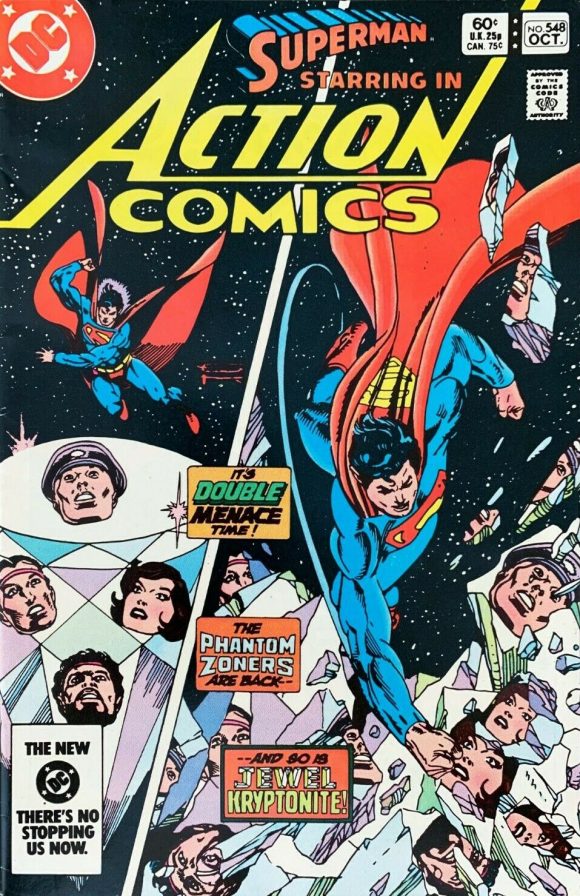 Action Comics #405. How can a Neal Adams cover be underrated? Simple, when he appears to have aped his own iconic cover from Superman #233. This one isn’t as powerful as that “Kryptonite Nevermore!” cover but Superman still looks pretty badass. (By the way, Adams claims to hate the cover of #233. Why? Read here.) 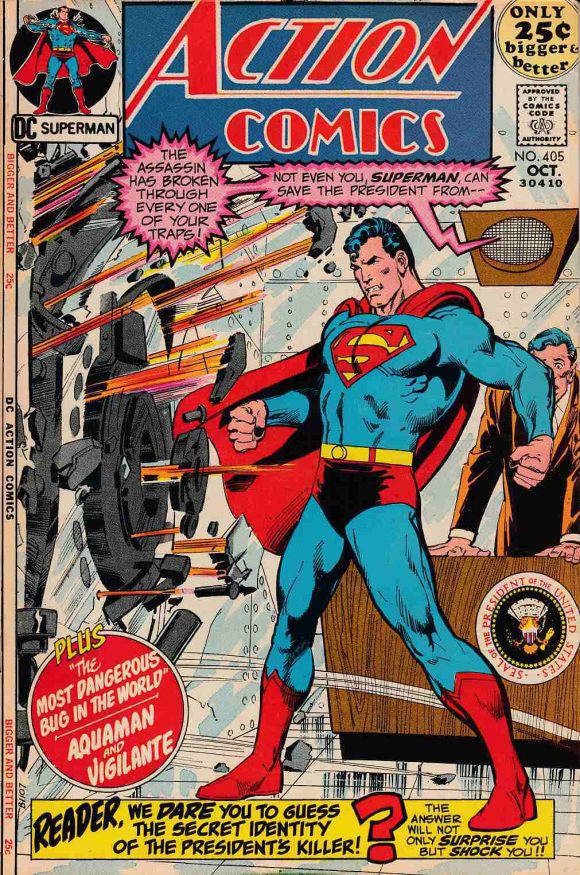