THE FILMATION FILES kicked off with a look at the Justice League of America cartoons primarily because it was a good way to give you an overview of the guest-star “super superheroes” whose adventures popped up in 1967’s Superman-Aquaman Hour of Adventure. (Click here.)

But I wanted to get to The Flash as soon as possible because on balance, these episodes are among the most consistently entertaining of all the shorts. Two of the three episodes are among Filmation’s very best — including Batman, Superman, Superboy and Aquaman — while the third is a solid, if uninspired, outing.

I also wanted to do The Flash this week because on Wednesday, DC Comics published The Flash #750 — an anniversary special that celebrates the Fastest Men Alive. (Click here for more on that.)

So ready to roll? Good, me too.

1. I dig the John Garth theme music and how the opening utilizes Barry Allen’s ring to introduce the Flash imagery. There’s lots of strobing and exploding and running and, by golly, I wonder how many kids had seizures watching it. Check it out — with that stentorian Ted Knight narration:

2. Filmation wouldn’t be Filmation — at least these shorts — if the heroes weren’t off-model. The Flash’s costume, designed by Carmine Infantino, is one of the greatest in comics history: simple yet exciting, great shorthand for sleek speed with its bright red-and-yellow color scheme and lightning bolt accents: 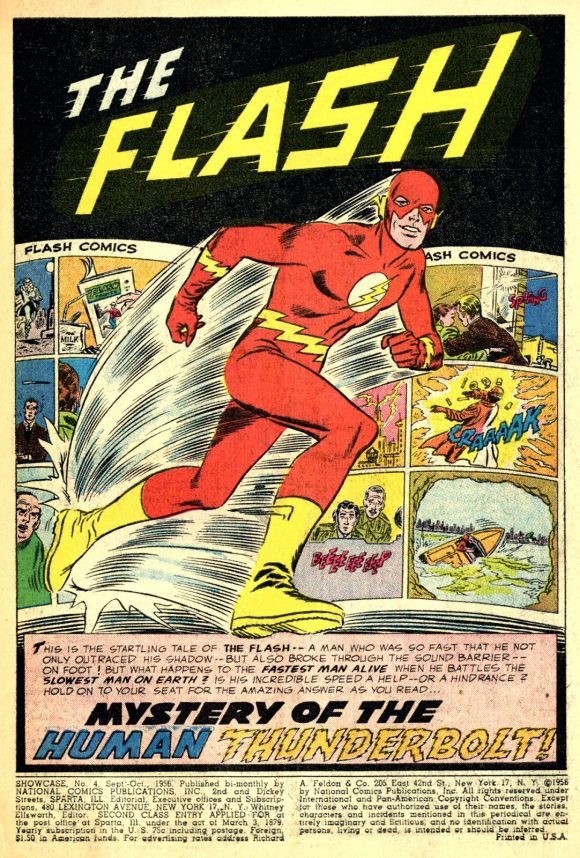 For whatever reason, Lou Scheimer’s crew opted to do away with the Scarlet Speedster’s lightning bolt gloves and gave him straight yellow gloves instead. Even worse is his generic belt with lightning bolt buckle. I can only conjecture that they made the change to simplify the animation. Either that, or they just weren’t paying attention. I mean, it looks good, but not nearly as fantastic as the original. 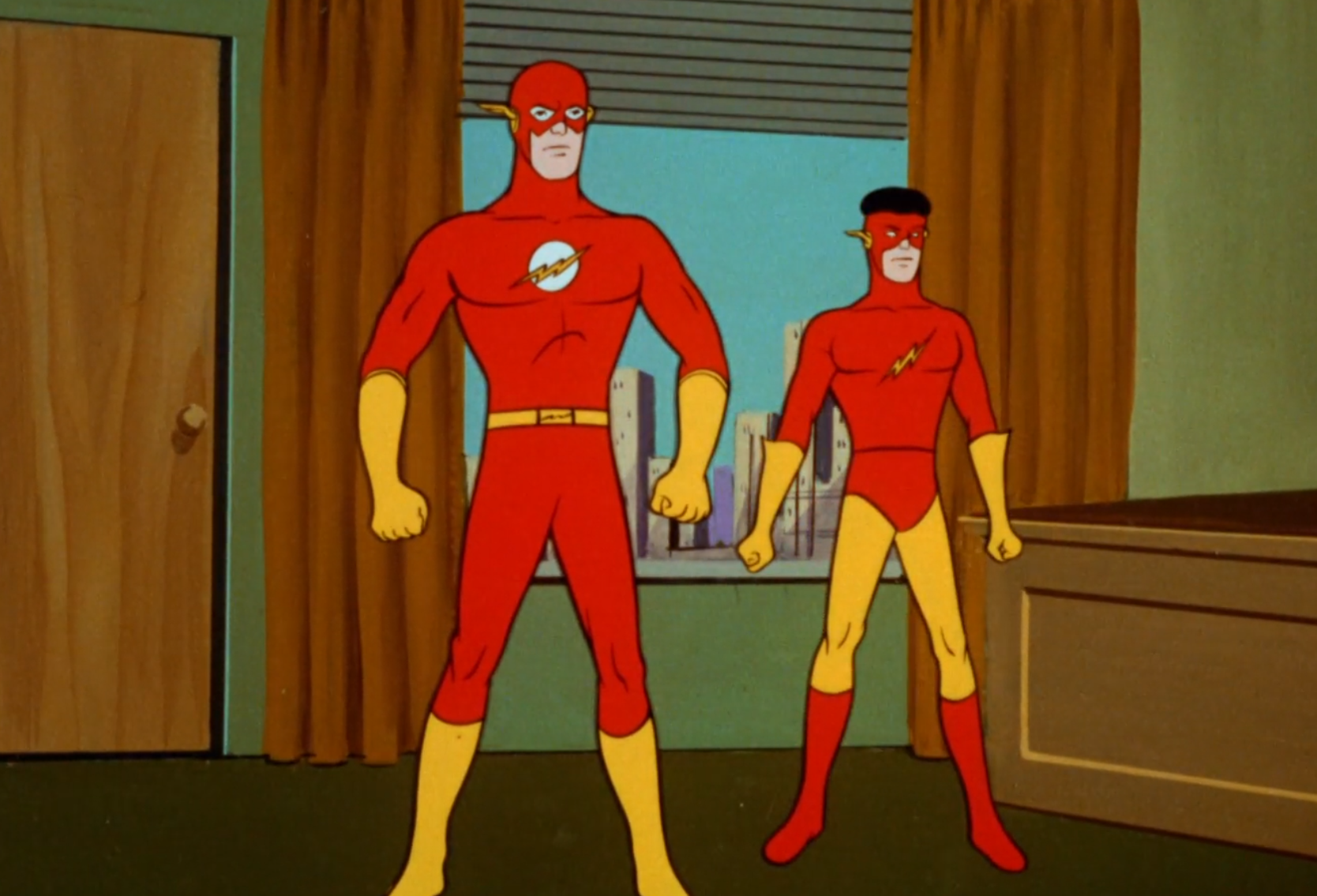 3. But it’s not as egregious as what they did to Kid Flash’s outfit, more or less flipping around the color scheme entirely. See, as much as I dig the Flash’s comics outfit, I love Kid Flash’s main Silver and Bronze Age look even more. Again, the Filmation version looks cool — just not as spectacular as it could have. Such a mystery. 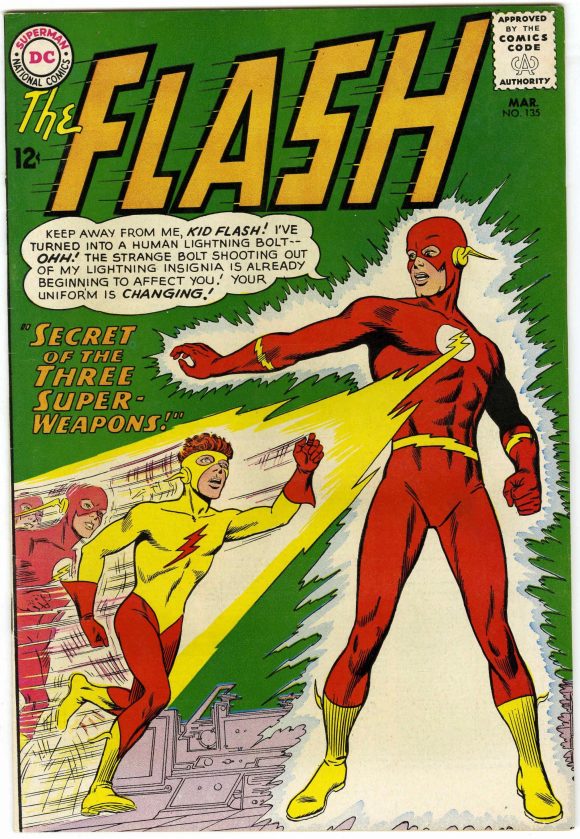 4. On to the episodes themselves: At the top of the list is Take a Giant Step, by George Kashdan, one of the most thrilling of all of Filmation’s DC cartoons. The set-up is pretty simple: The Flash and Kid Flash battle a mad scientist – Professor Crag (sp?), keeper of a mustache that looks like nose hair gone wild. 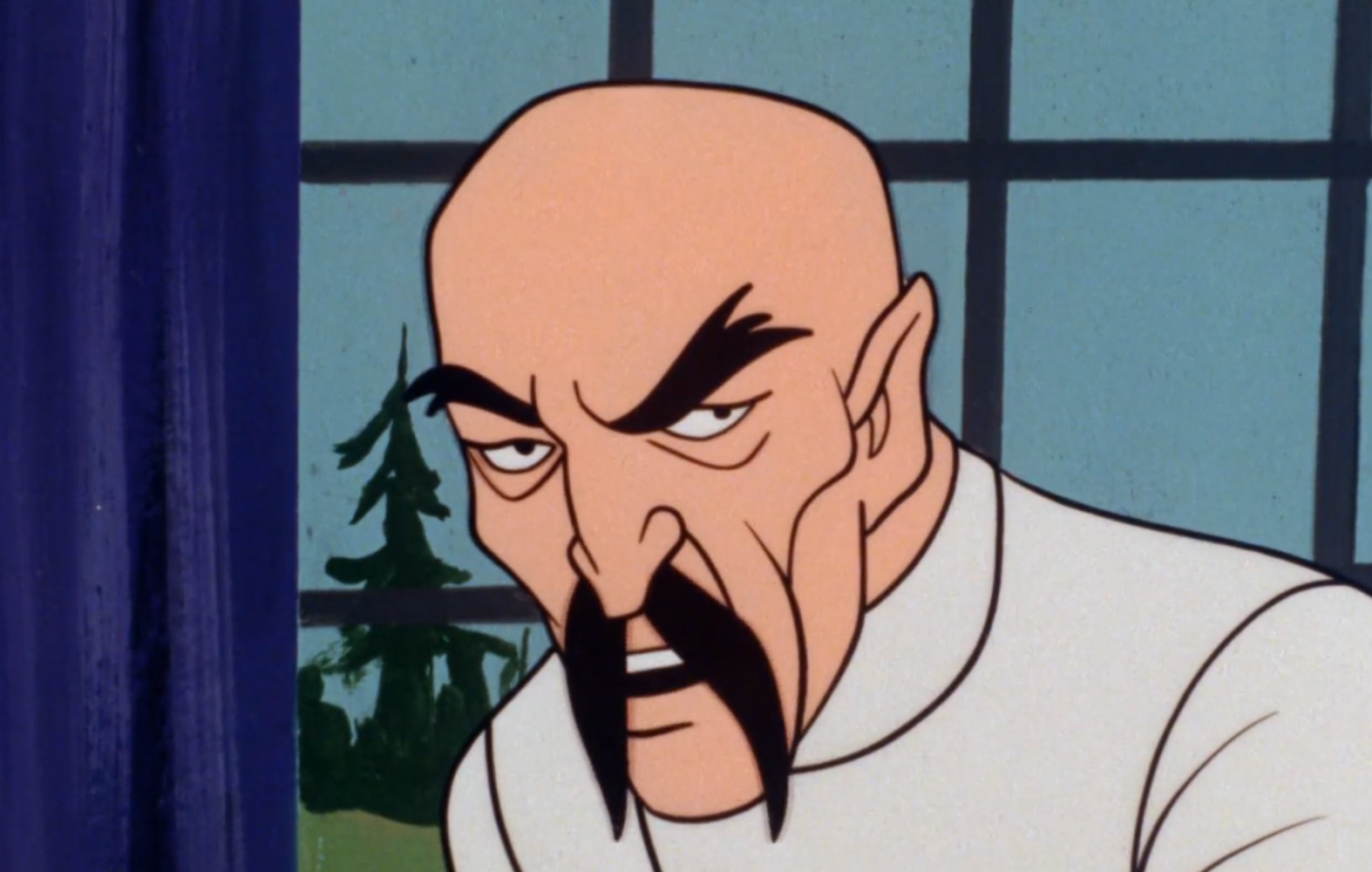 5. The plot isn’t much to speak of, but it comprises set piece after set piece, each of which cleverly showcases the Scarlet Speedster(s’) powers. There’s no down time: It’s into the fray right away, with Flash and Kid Flash confronting obstacle after obstacle until finally Kragg (sp?) is cornered at a Science Fair. 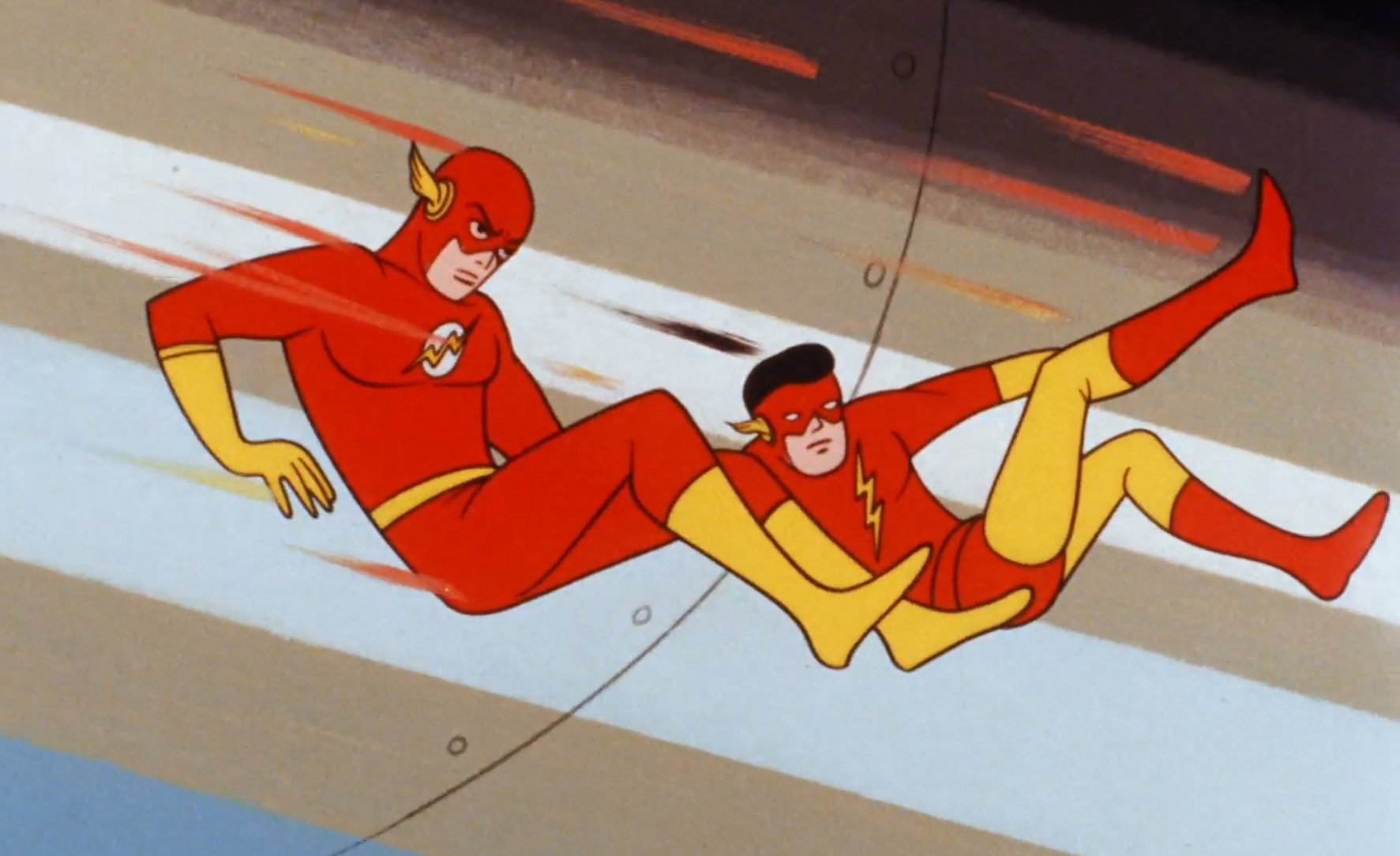 6. Unlike his square persona in the comics, the Flash (voiced by Cliff Owens) is hilariously excitable — – especially in Take a Giant Step – whether he’s yelling to Kid Flash (Tommy Owens), “Maybe we can bowl him over with those ROCKS!” or exhorting “GOTCHA!” when he saves his sidekick’s bacon. 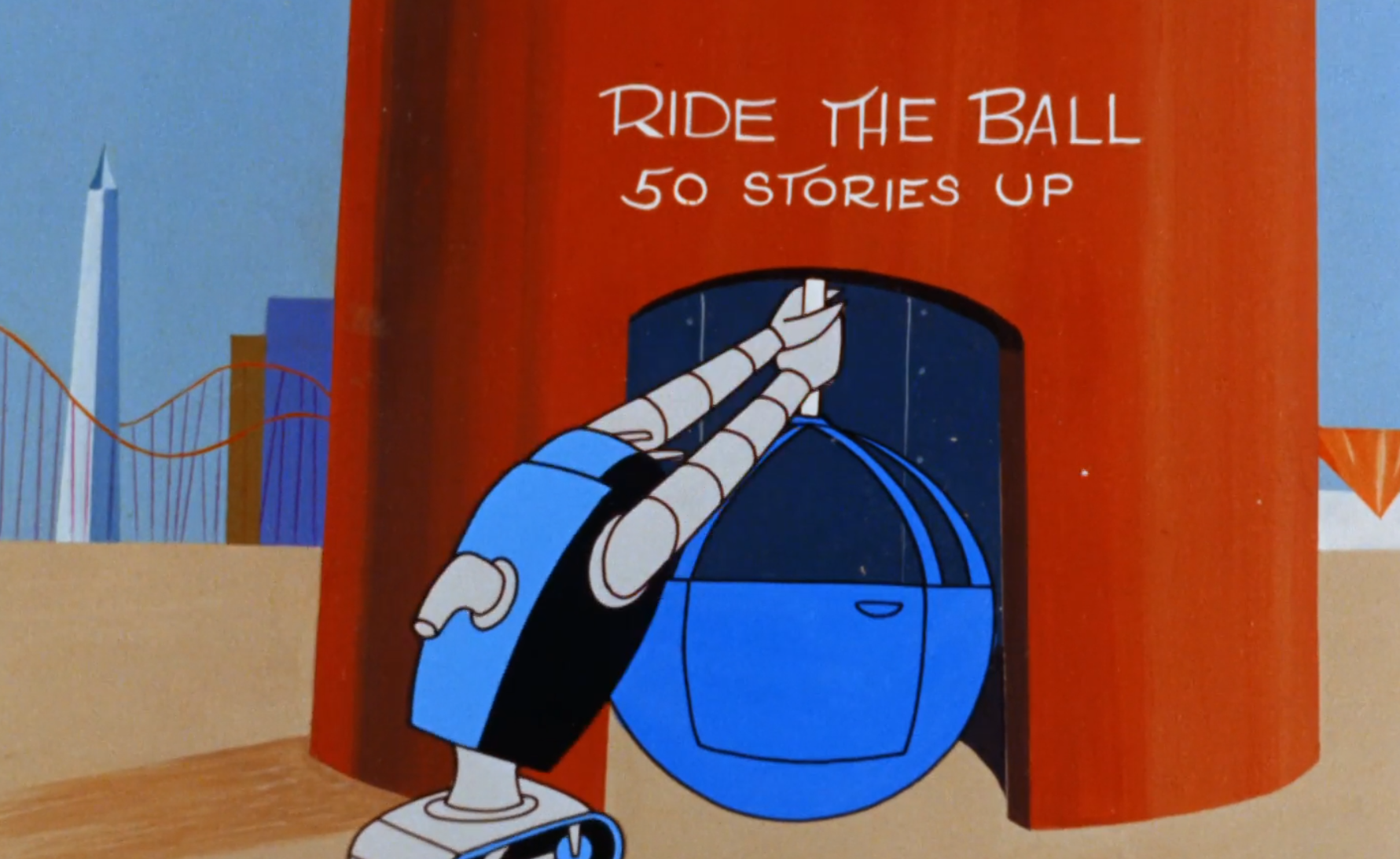 8. Next in line – and not far from the top itself – is To Catch a Blue Bolt, by “Zany” Bob Haney. I’m always disappointed that Filmation didn’t use more comics villains in these shorts. I mean, if you’re gonna have the Flash and Kid Flash throw down against another speedster, why not go all the way with Reverse-Flash? That said, Blue Bolt is a real kick in his blue jumpsuit, white boots, tighty-whities and goofy headgear. (John and I have a FILMATION FILES podcast coming up on this episode. Watch for it!) 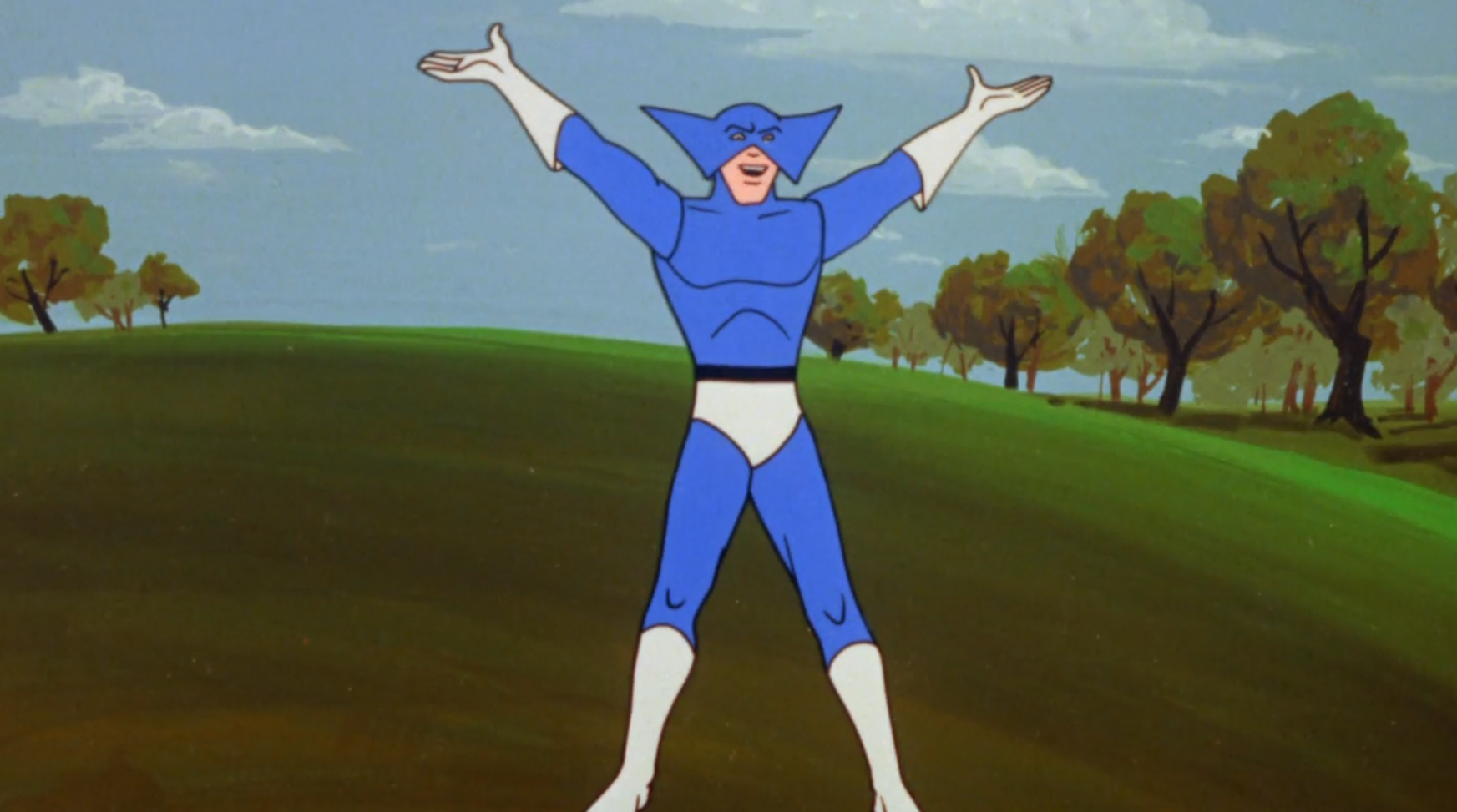 9. And like Take a Giant Step, the plot is pleasingly simple, with virtually every sequence designed to show off everyone’s powers. The Flash and Kid Flash chase Blue Bolt across the Atlantic to the Netherlands, Paris and, ultimately, Egypt, with each setting providing fresh challenges for our heroes. The episode is thick with plot holes — but then most Filmation cartoons are. You just gotta go with it. 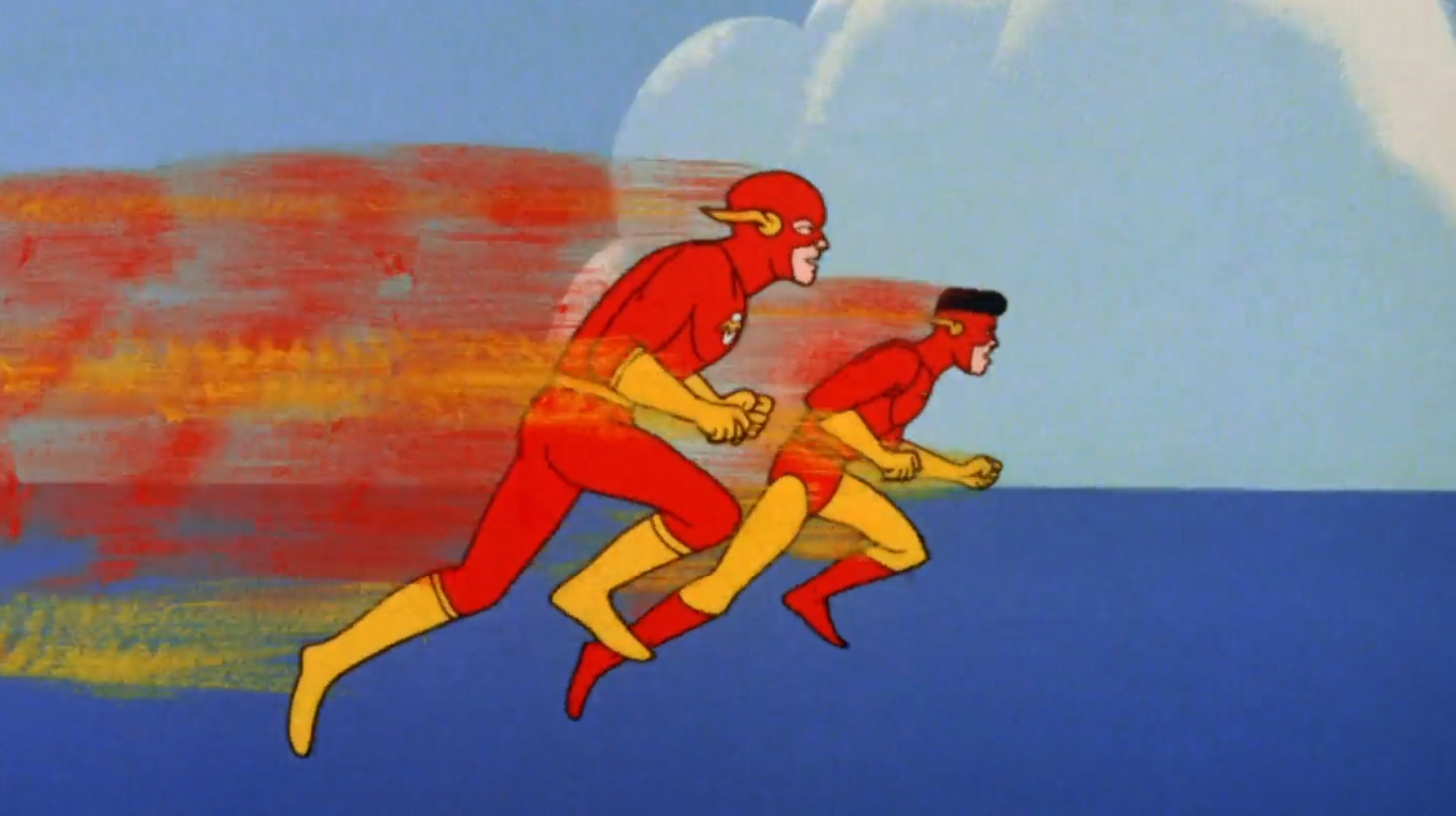 Running across the ocean…

10. By the way, if you’re going to watch these, do your best to check them out on the DC Universe app, which boasts HD remastering for these segments (and the Aquaman cartoons they’re packaged with). Filmation is often knocked for its low-budget, schlocky animation — but there’s still some great detail and artistry to be found. Just check out the speed effects here: 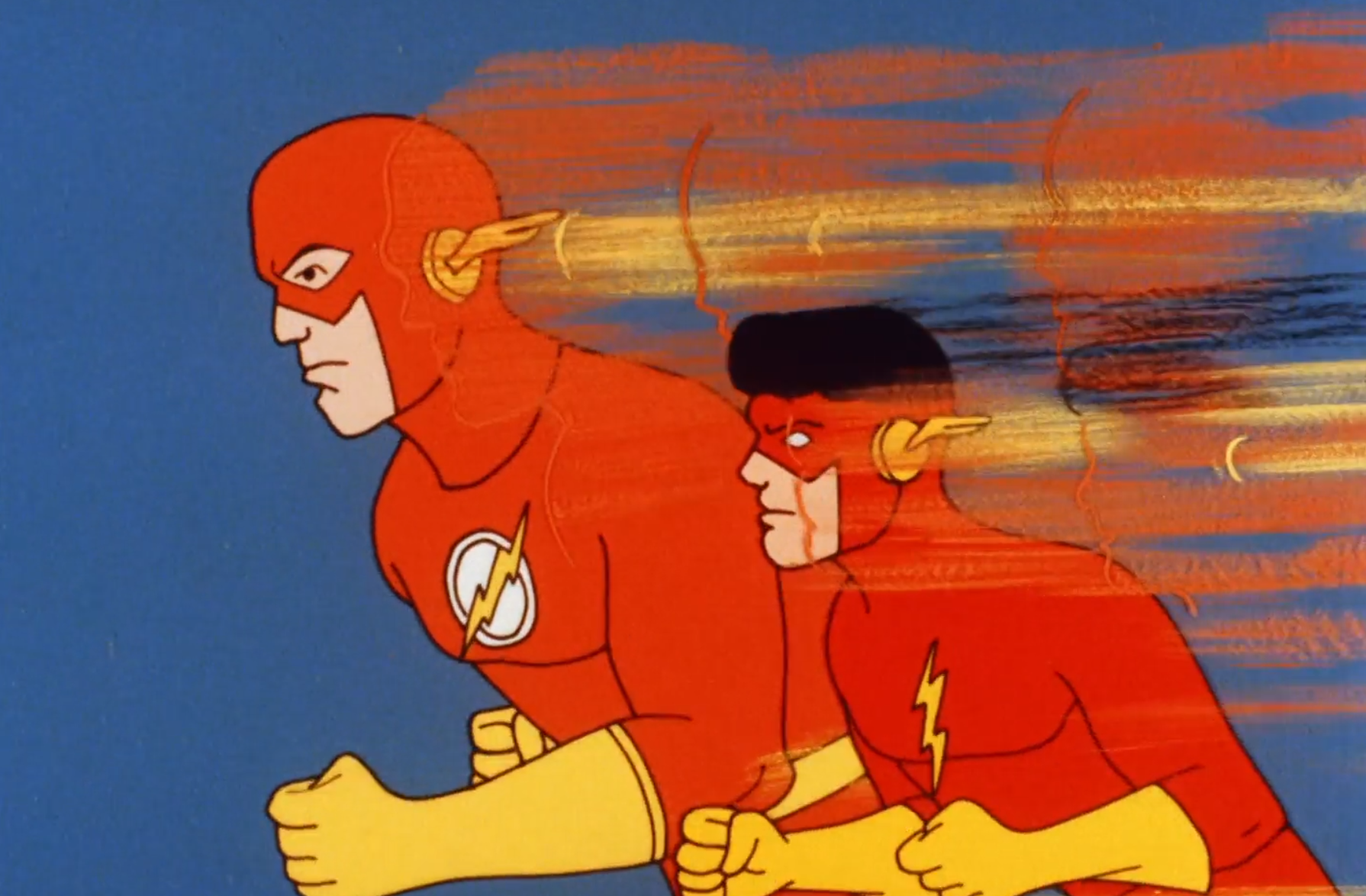 11. The Chemo-Creature, by Kashdan, is the one episode that falls short. I mean, it’s perfectly adequate but it’s not terribly inspired or even all that exciting. It’s just a standard hero vs. beast story, with Flash protecting a team of stereotypical scientists (wacky hair, lab coats, over-the-top Ted Knight voices) from an irradiated, giant ant. 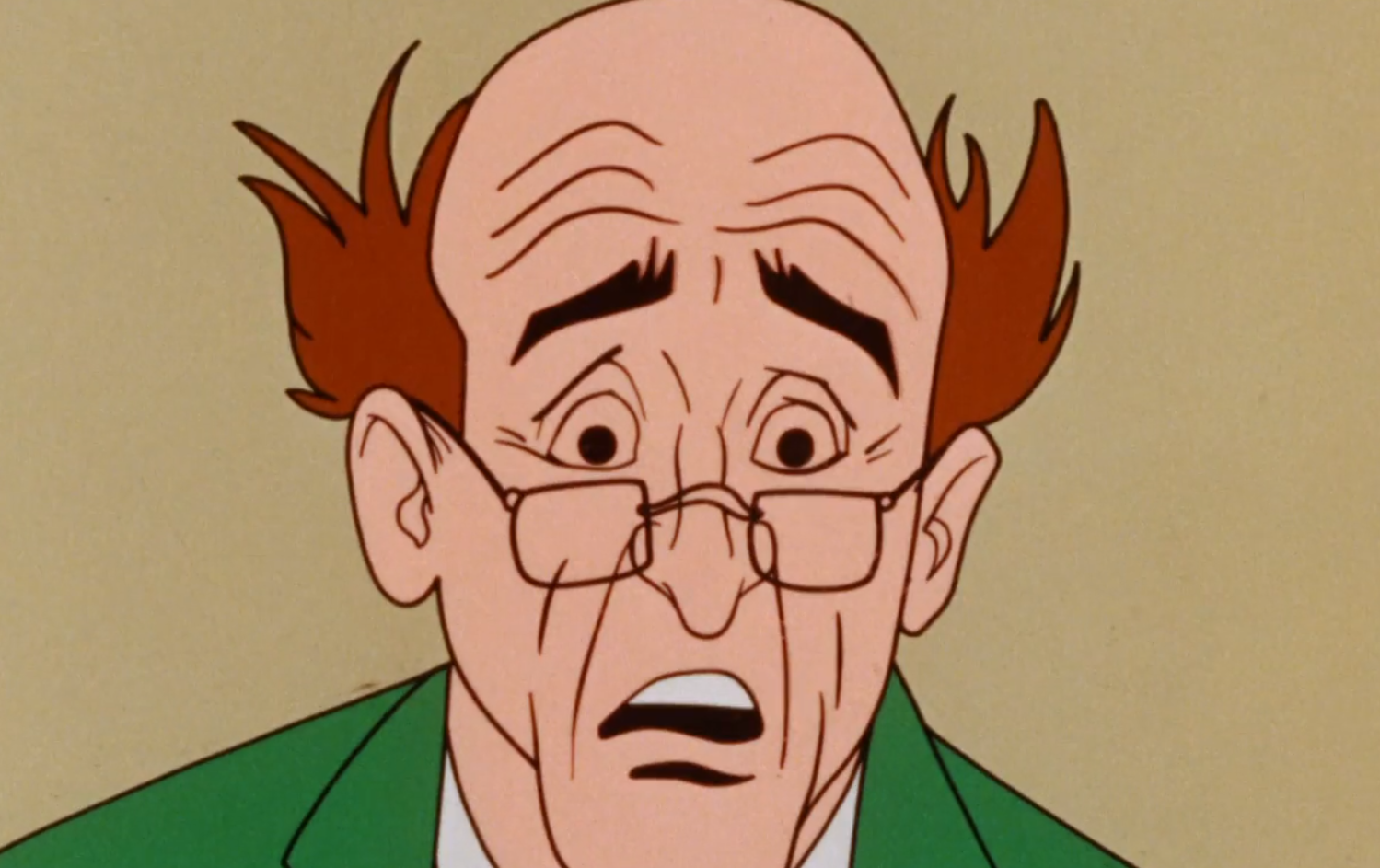 13. Anyway, The Flash cartoons for the most part represent what fans love most about Filmation: They’re exciting, kitschy, kinetic and — most of all — just plain fun. They’re about as good as it gets.