A BIRTHDAY SALUTE: More or less ranked, anyway. Because it’s all great stuff… 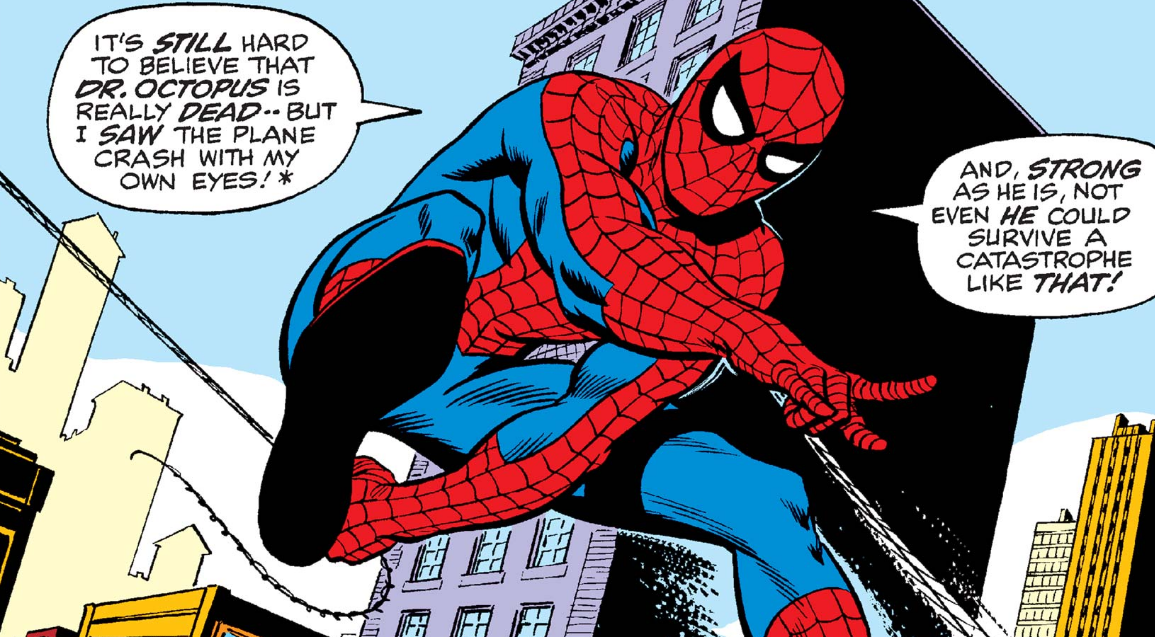 The late, great Gil Kane (nee Eli Katz) was 95 years ago on April 26, 1926. He remains to this day one of the all-time comics greats, with a bold, dynamic style that is instantly recognizable.

With that in mind, columnist Fred Van Lente, a former Amazing Spider-Man writer, has put together THE TOP 13 GIL KANE SPIDER-MAN STORIES – RANKED.

Hi, my name is Fred Van Lente, and I read old comics so you don’t have to! Or, more accurately, I read old comics and report back to you which ones I think you should read, ranked semi-arbitrarily in order of preference.

Speaking of old comics, my partner-in-comics-crime Ryan Dunlavey (he of Comic Book History of Animation fame) and I are currently running a Kickstarter to bring back our first series, Action Philosophers! — in glorious color! If you are interested in the lives and thoughts of history’s A-List brain trust told in a hip and humorous fashion, please check it out and pledge, if you are so inclined.

That little plug out of the way, let’s get down to the matter of hand: Wishing a Happy Birthday to the late Gil Kane, one of the greatest comics artists of the 20th century. After a lengthy career at DC, where he’s most famous for designing Hal Jordan and most of the Green Lantern cast, he went to rival Marvel and did a zillion covers and pinch-hit on a number of titles, most notably one I used to write, The Amazing Spider-Man.

Kane wasn’t on this title long — barely 20 issues between 1970 and 1973 — but he left a major impression, guiding the title through some of the most seminal storylines in its history. Despite the brilliance of his GL run, Kane was kind of born to draw Spider-Man, whose singularly acrobatic posing and fighting style was perfect for the artist’s deep perspective panels of tumbling, twisting figures. 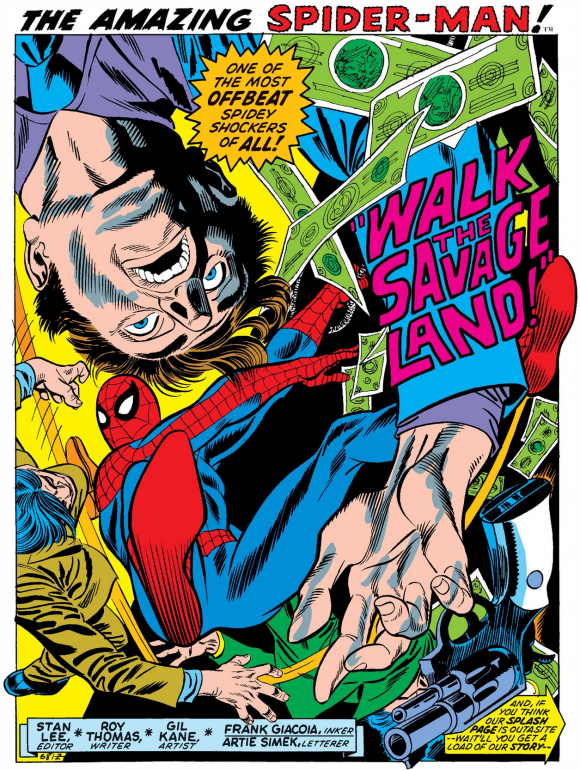 You Stan stans who got all bent out of shape by my review of Abraham Reisman’s True Believer should be pleased to hear that Gil Kane was one of the artists who really loved working with Lee’s Marvel Method:

“I think that without question that the (resulting comics) writing is infinitely more spontaneous, more varied, more effective than it ever could be if the writer just sits down and types out ‘Panel One, Scene One’ and dictates the thing right from the start, and the artist is merely an instrument.”

Acting as his own instrument, Kane’s stories tend to be light on plot and character development, but he could draw kick-ass fight scenes with the best of them. He also loved floating heads. Kirby had his Krackle, Buscema the Younger has his Sal-Punches, Gil had his Kane Heads. Here’s my TOP 13 most-recommended stories from his Spider-Man run, with especial attention paid to his Kane Heads: 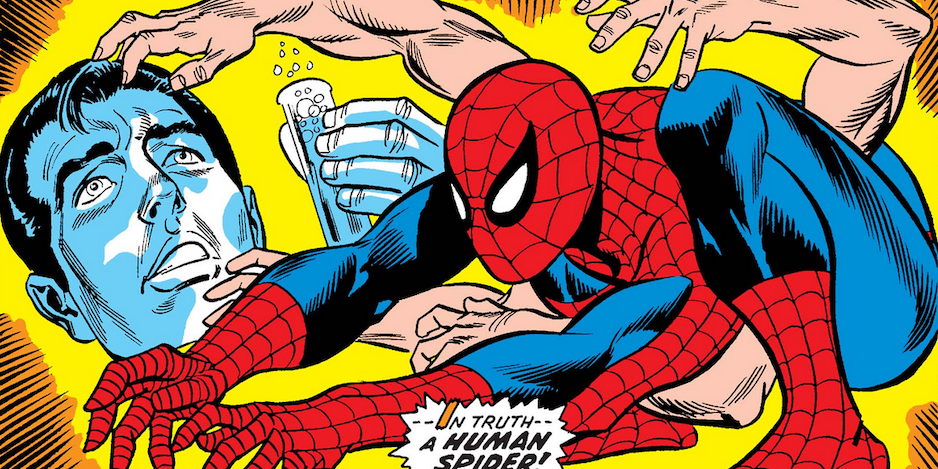 13. Amazing Spider-Man #89: “Doc Ock Lives!” Yeah he does! Kane’s first issue, and we get a great grouping of Kane Heads as Spidey scours the city for Otto Octavius, PhD. The villain’s sinewy mechanical arms are perfect for Kane’s style, resulting in a fantastic final page of Spidey plummeting to his not-death. 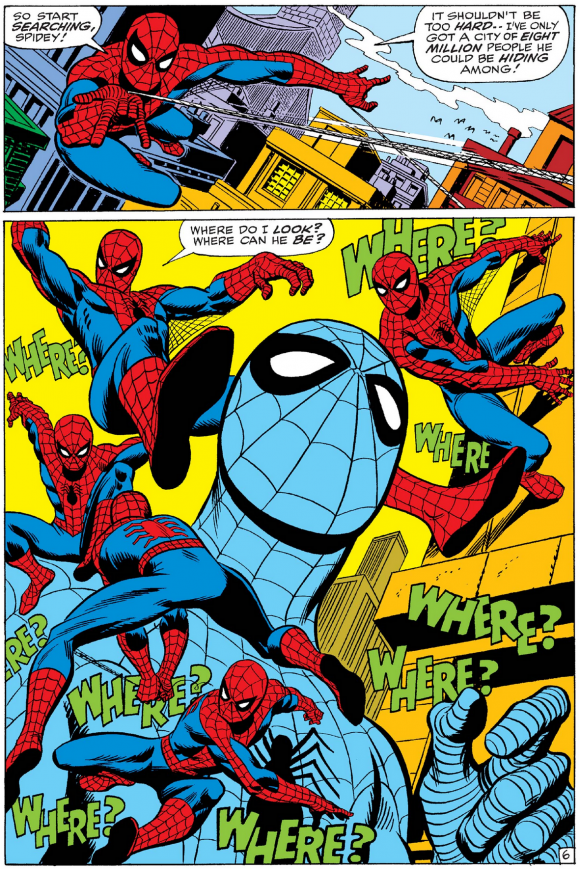 12. Amazing Spider-Man #103: “Walk the Savage Land!” This is essentially Kane’s remake of King Kong, with Gwen Stacy in the Fay Wray role. My all-time favorite Kane comic is The Sword of the Atom, and all this bouncing around in the jungle seems like a gear-up to that. Plus, you get Ka-Zar and Kraven, what’s not to like? 11.. Marvel Team-Up #19: “The Coming of… Stegron the Dinosaur Man!” I actually like this Jungle Kane throw-down with Ka-Zar even more than the Gog one. Some people were born to draw dinosaurs getting punched in the face, and Gil Kane was one of them. 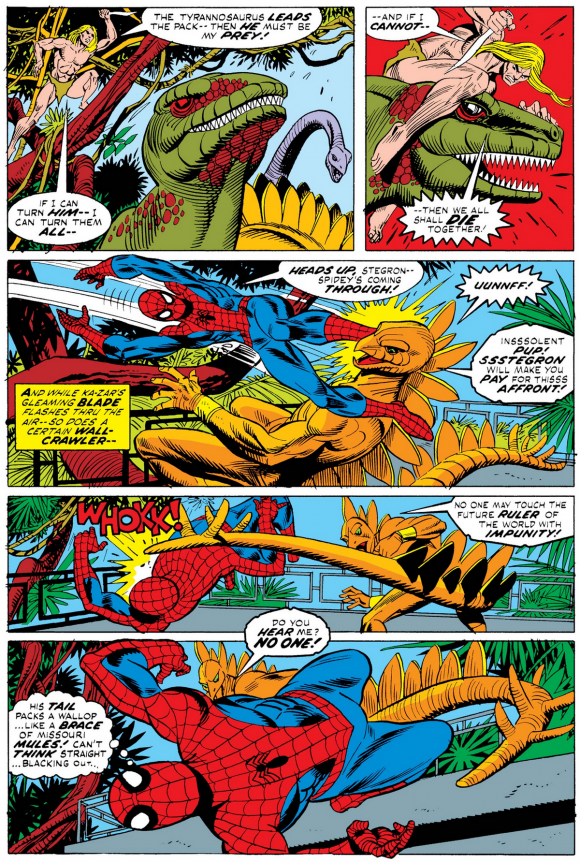 10. Amazing Spider-Man #92: “When Iceman Attacks.” Spider-Man has been blamed for the death of the father of his girlfriend, Gwen Stacy, and Gwen has allied with Bullit, a District Attorney running on an I-Hate-Spidey-More-Than-Jonah-Jameson platform. Spidey seemingly kidnaps Gwen to get her away from this guy, leading to a classic Superhero Misunderstanding as a passing Bobby Drake decides to try and save her. The would-be DA recruits Iceman to his cause just as Jonah has one of his periodic attacks of nobility and refuses to support the right-winger. Bullit kidnaps Robbie Robertson to try and change the Bugle’s mind, leading Spidey and Icey to team-up to rescue him. All we need is Firestar and Ms. Lion and we’d have a pretty good Spider-Man and His Amazing Friends dry run on our hands here. 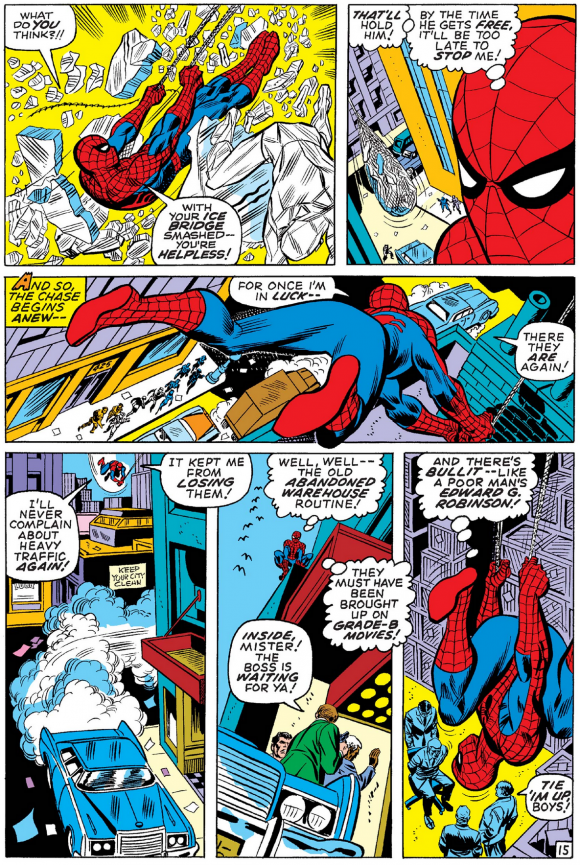 9. Amazing Spider-Man #123: “Just a Man Called… Cage!” Poor Spider-Man, his loved ones keep dying and other superheroes keep blaming him for it. J. Jonah Jameson hires Luke Cage to bring in Spidey in the wake of the death of yet another Stacy, because of course he does, resulting in a series of spectacular Kane-drawn fisticuffs until Spidey convinces Cage to stuff Jameson’s money into his mouth, because of course he does. 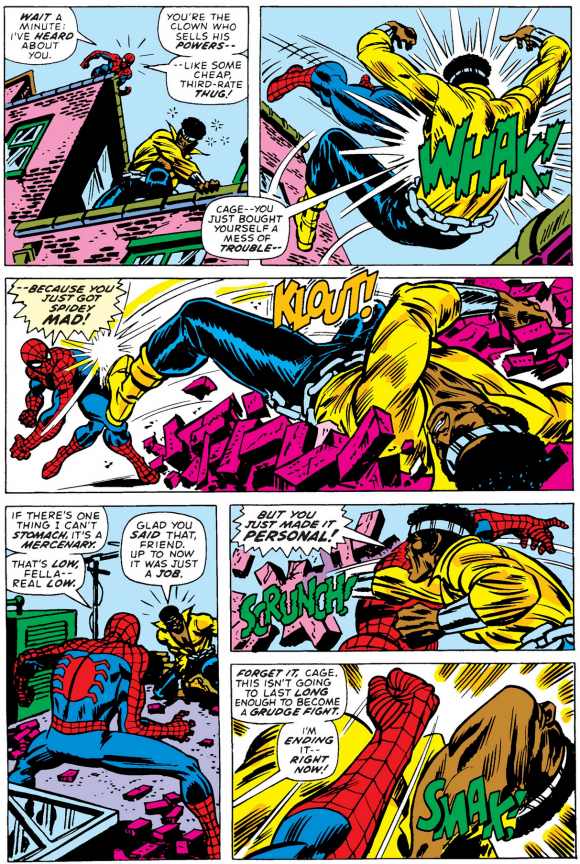 8. Amazing Spider-Man #122: “The Goblin’s Last Stand!” Spoiler alert: Gwen Stacey died last issue. And while the highlight here is the Goblin’s own death, done in by his own treachery in a way that is surprisingly effective thanks entirely to Gil Kane, the artist treats us to an even more effective final sequence of Mary Jane and Peter dealing with the latter’s grief. 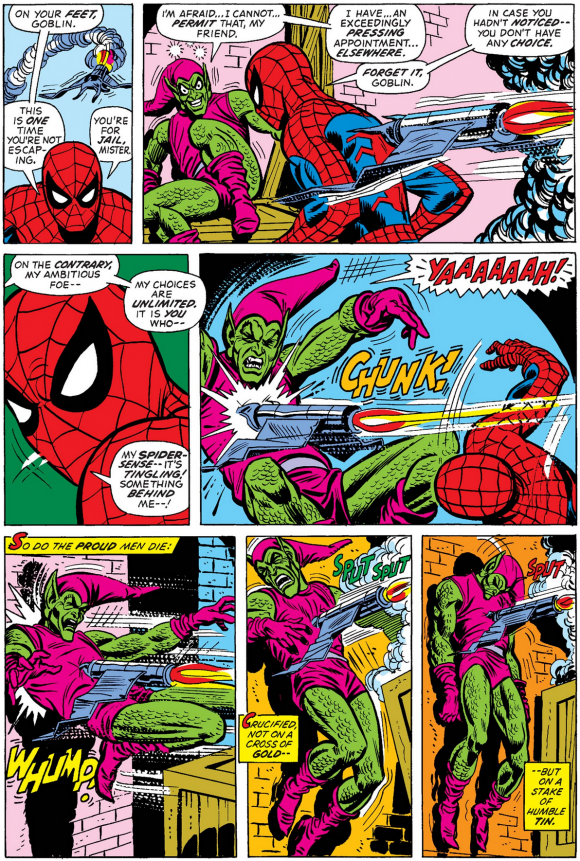 Needless to say, the sign of a great comics storyteller is that he is as good with the quiet moments as he is with the bombast. 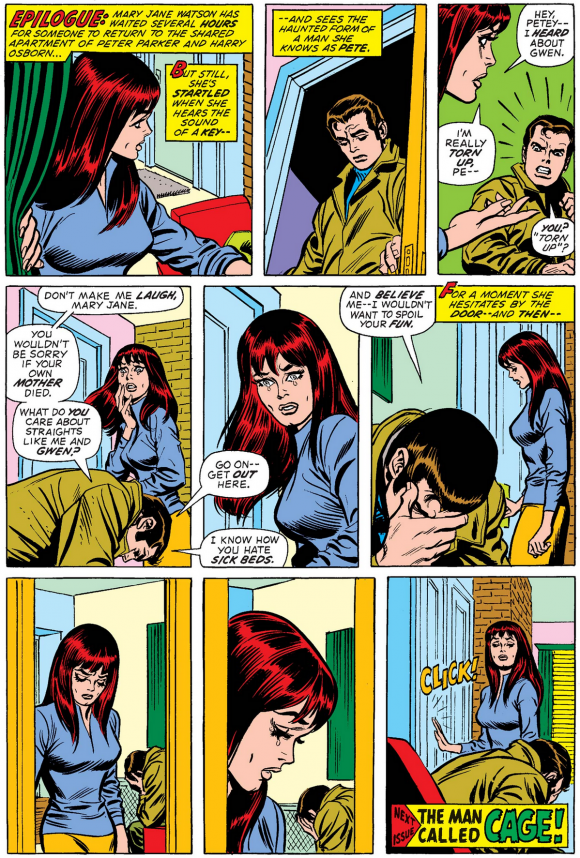 7-5. Amazing Spider-Man #96-98: I couldn’t decide between these three, so I’m lumping them all together. Issue #96 (“And Now, the Goblin”) is a great slow burn of Norman Osborn’s mental unraveling until he becomes his green-garbed alter ego at the end. Issue #97 (“In the Grip of the Goblin”) is a great Parker/Osborn throw-down, complete with amazing druggy Harry Osborn Kane Heads and Gwen Stacy love Kane Heads. And Issue #98 (“The Goblin’s Last Gasp”) is the great climax that ties the whole thing together. 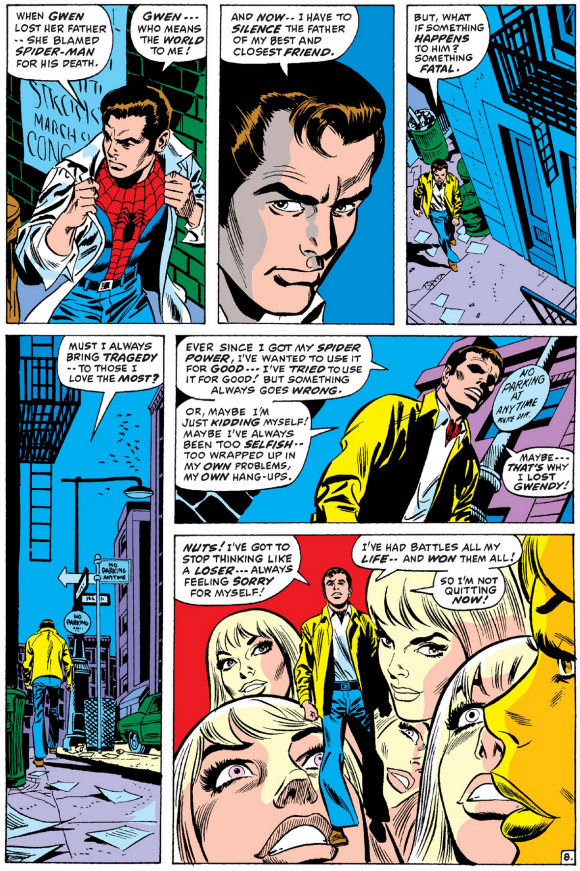 This is the infamous “anti-drugs” storyline that is best known for editor/scripter Stan Lee bucking the Comics Code and running them without the seal because the censors protested the depiction of drug use. I looked up both the 1954 and 1971 Codes; the former doesn’t mention drugs at all, the latter says “Narcotics or Drug addiction shall not be presented except as a vicious habit,” which is definitely the case here, so you wonder what the heck their problem was in the first place. Also, Lee and Kane’s depiction of drug addiction is barely one step above Reefer Madness (1936), so it’s not like they were doing a tutorial for would-be junkies. 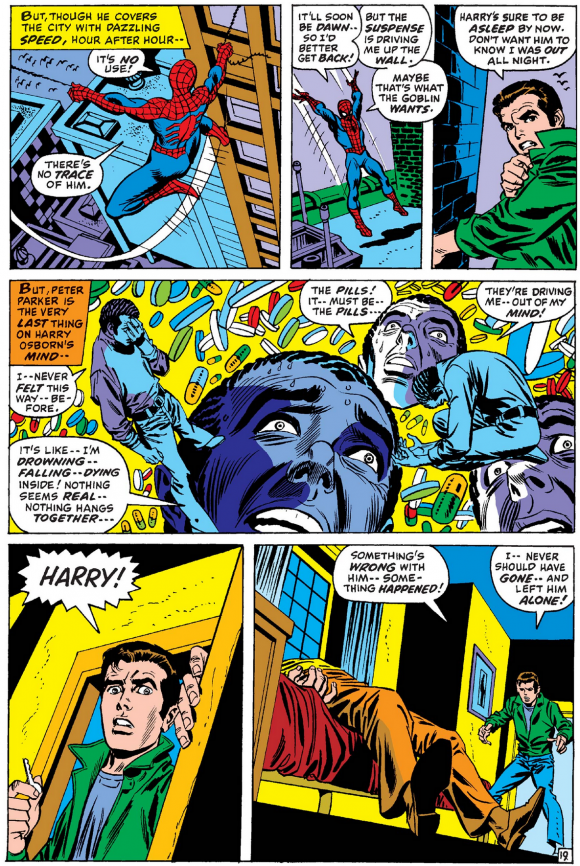 4. Amazing Spider-Man #101: “A Monster Called… Morbius!” Speaking of lame Comics Code clauses, the revised 1971 Code sniffs that “Vampires, ghouls and werewolves shall be permitted to be used when handled in the classic tradition such as Frankenstein, Dracula, and other high calibre literary works written by Edgar Allen Poe, Saki (H.H. Munro), Conan Doyle, and other respected authors.” Ooh, look at the big brain on the Comics Code, they know what Saki’s real name was! They must be qualified to censor funnybooks! I don’t think so: Stuff it, Poindexter! 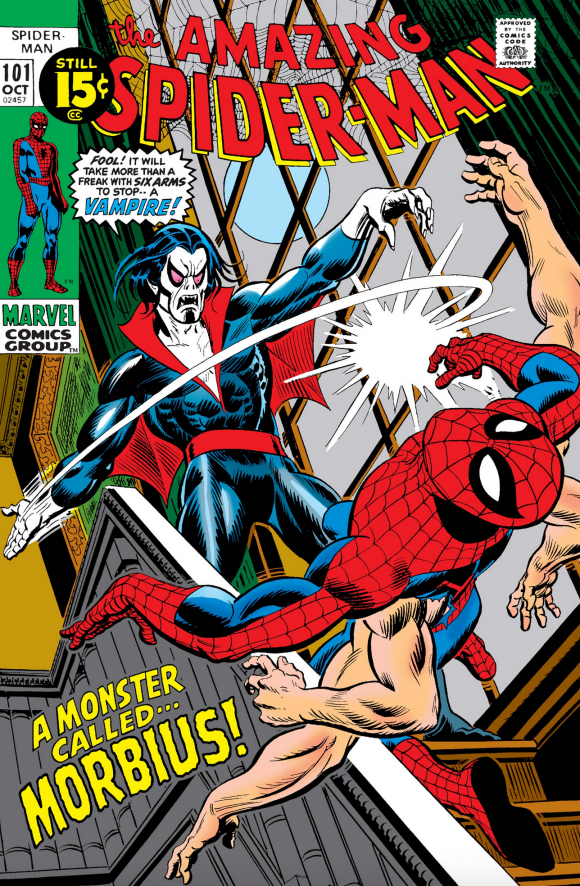 Morbius is a hot Greek dude in a sash and a unitard and he is bitch-slapping Spider-Man, who has six arms in a misguided (and extremely dumb and contrived) attempt to rid himself of his powers last issue. Saki couldn’t write this high-calibre literary work if his life depended on it. I love me some Morbius, and used him a bunch in my Marvel Zombies and Amazing Spider-Man runs. Because the Code also prohibits “instruments associated with walking dead” (sorry, Robert Kirkman), the cover takes pains to point out he is a Living Vampire, and all blood-sucking happens discretely off-panel. Still, great intro to a great character. 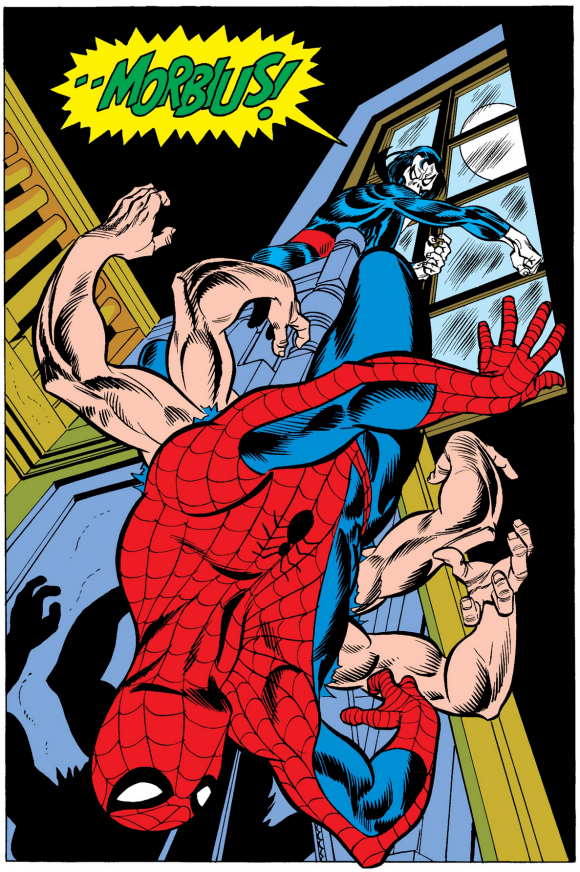 3. Marvel Team-Up #4: “And Then—The X-Men!” (They weren’t trying too hard with these story titles, were they.) I love this goofy comic, which was with a bunch of other team-ups in a giant treasury edition I truly treasured as a young lad. For some inexplicable reason, the Morbius storyline ends here, with everyone’s favorite Living Vampire kidnapping a buddy of Professor X. Spidey is framed, as is his wont, and the X-Men go after him, in their civvies for no particular reason. This Spider-X throwdown is perhaps the second most famous one, except this time the merry mutants win rather handily. Once Cyclops & Co. figure out their error they’ve got to track the Living Vampire down. 2. Amazing Spider-Man #121: “The Night Gwen Stacy Died!” Harry Osborn is back on the drogas (“D-Lysergic acid diethylamide…what you and Miss Watson would know as LSD,” his doctor intones portentously at Gwen and MJ as Harry sweats to death in bed) stressing out his dad to the point where he’s driven crazy by Kane Heads. He kidnaps Gwen Stacy and brings her to what is clearly the Brooklyn Bridge, misidentified (and mis-colored) as the George Washington Bridge for reasons I’ve never understood. (Spidey is even shown swinging south, past the United Nations building, when the GWB would be several miles behind him to the north.) The bit where Greenie tosses Gwen off the bridge and Spidey webs her, only to discover she’s dead anyway, along with the final splash, remains extremely powerful and effective storytelling on Kane’s part. 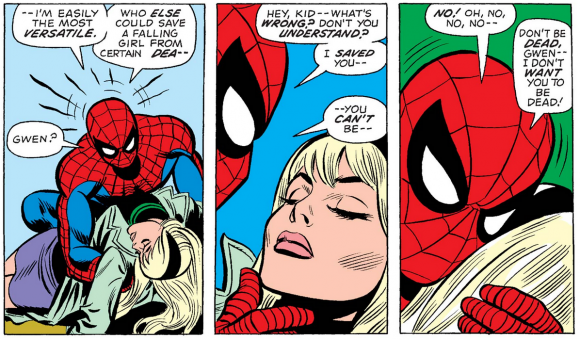 1. Amazing Spider-Man #102: “Vampire at Large!” I love this ridiculously awesome comic. Morbius and Spider-Man have both busted into Doc Connors’ old lab to look for cures for their respective conditions (the latter with permission), and the stressed-out chemist transforms into the Lizard for a double-sized three-way battle. *Chef’s kiss.* This is Kane in his element. The highlight is a spectacular “Way It Began” splash with Kane-Heads ushering our way into Morbius’ origin. 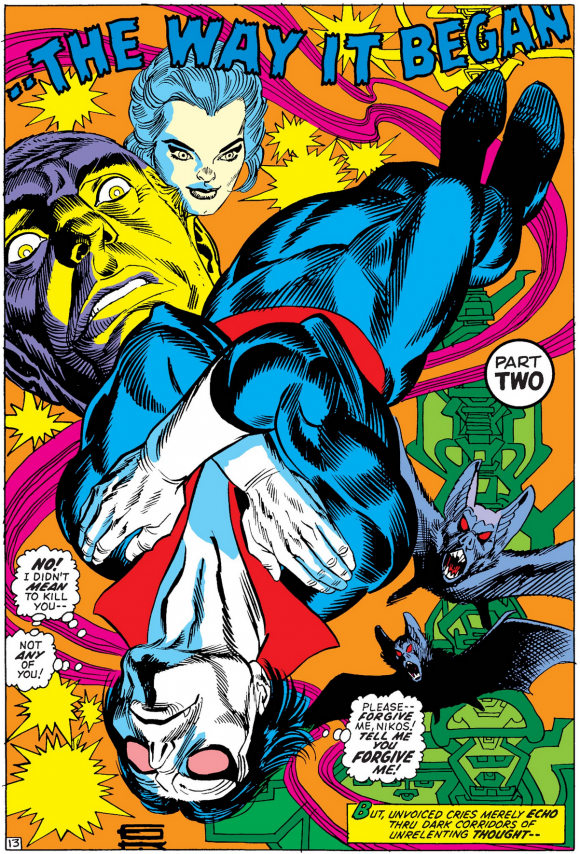 13th Dimension columnist Fred Van Lente is a comics writer, historian and playwright, who has chronicled the relationship between Stan Lee and Jack Kirby in the play-turned-podcast King Kirby, written with Fred’s wife Crystal Skillman.