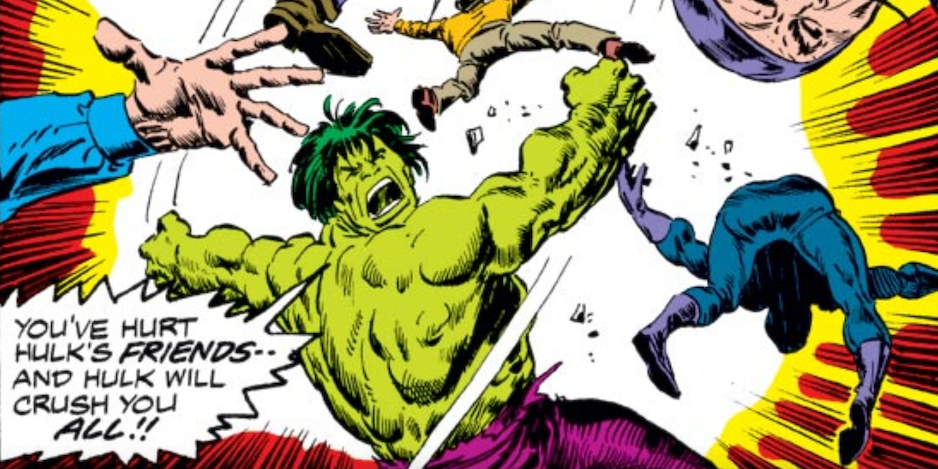 Happy 86th birthday to the great Sal Buscema, whose fluid and deceptively simple style made him one of my favorite Marvel artists when I was growing up! He was the definitive Incredible Hulk artist, having worked regularly on the title for about a decade, from 1975 to 1985. It was a real pleasure to go back and go through his entire run (#194 to #309!) throughout January, and I picked out my favorites…

…but just as I was sitting down to write this I read a column by my friend Brian Cronin about an homage to Buscema in a recent issue of Immortal Hulk. Buscema had a very distinct way of rendering superheroic combat, partly derived from his older brother John (which was itself taken from Kirby) but he very much made it his own: a staple pose of his I have come to call the “Sal-Punch”.

Below we have an early Sal-Punch from Incredible Hulk #198. Hulk swings his fist like Lou Gehrig in his prime. The opponent is launched into the air in an X-shaped formation. His mouth is open, teeth bared in neo-Kirby fashion. It is a perfect, almost Platonic ideal of what I call the two necessary qualities of a Sal-Punch: B) The sailing victim’s body is arranged in such a way that we can see their face; if it could speak, this expression would say, “Egads, I hath been most soundly Sal-Punched.”

Once you have been made aware of the Sal-Punch, I guarantee you will no longer be able to not see it. Here are my TOP 13 favorite issues of Sal Buscema’s The Incredible Hulk — rated in ascending order of Sal-Punches.

13. The Incredible Hulk #206: A Man-Brute Berserk! In his decade on this title, Buscema got to draw a lot of Hulk-goes-wild-and-smashes-everything issues. This is the best one. Jarella, Hulk’s green-skinned love-interest, got rather unceremoniously killed by a Z-list villain last issue, and Greenskin is understandably pissed. He heads to New York City looking for Dr. Strange, thinking that maybe a wizard can bring her back to life (clearly Hulk has read a lot of superhero comics and knows resurrection is shockingly common), but instead gets some serious pushback from all these puny, puny humans. The next issue where he actually finds Strange and fights his old teammates in the Defenders is pretty great, too. (A rare Sal-Punchless issue.) 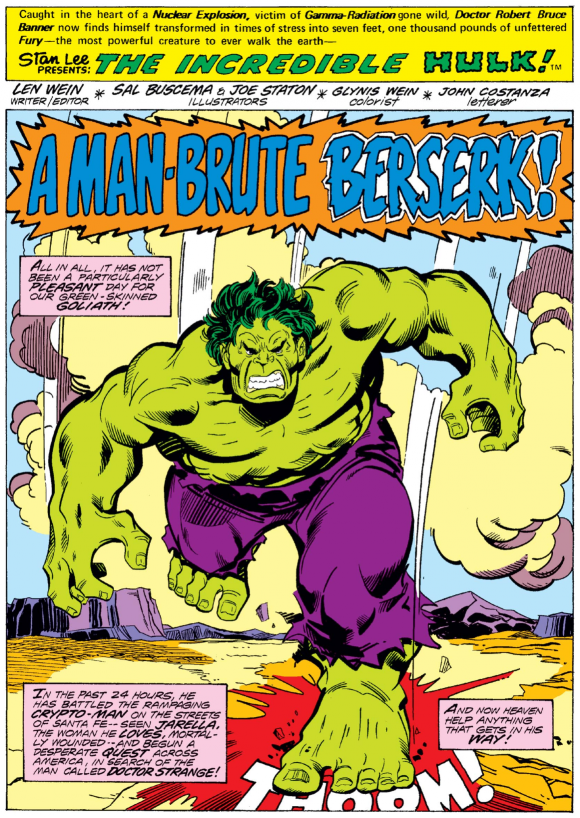 12. The Incredible Hulk #275: Megalith! Jackdaw, a winged agent of the Leader, breaks into Gamma Base to steal some of their anti-Hulk tech and gets in a big throwdown with the Purple-Pantsed One while controlling the titular Megalith. Joe Sinnott inks Buscema here, and they are a great pairing, earning this title a place on the list even with its sad lack of Sal-Punches. 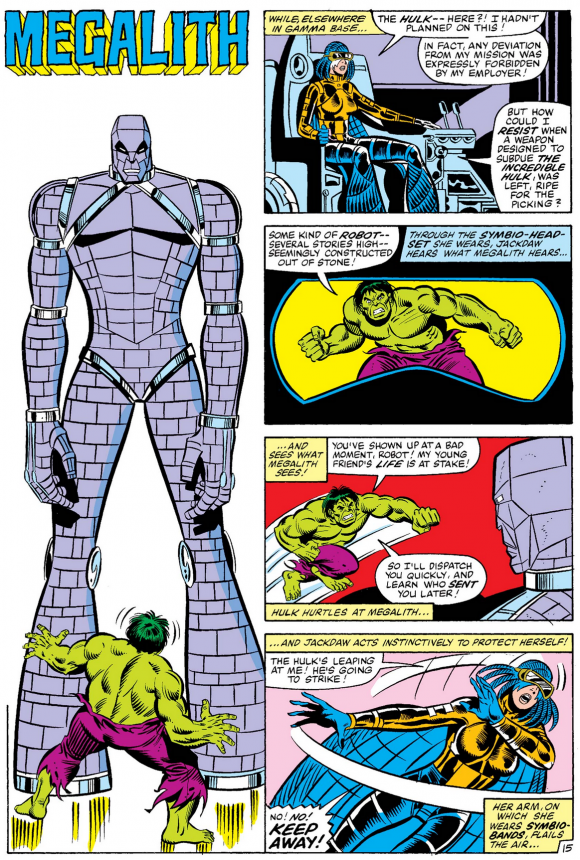 11. The Incredible Hulk #272: Weirdsong of the Wendigo! This issue falls in the weird interregnum between Alpha Flight losing their government clearance in Uncanny X-Men and getting their own series, in which the individual members were appearing everywhere. The rare Wendigo comic that emphasizes the monster’s horror roots, with a ripped-purple pants Bruce Banner stumbling across a snowbound cabin in which some serious cannibalism has been going down. Buscema inks himself in a kind of scratchy style that presages what I think is his best work, his run on Spectacular Spider-Man. (Half Sal-Punch: Legs only, no facial expression.) 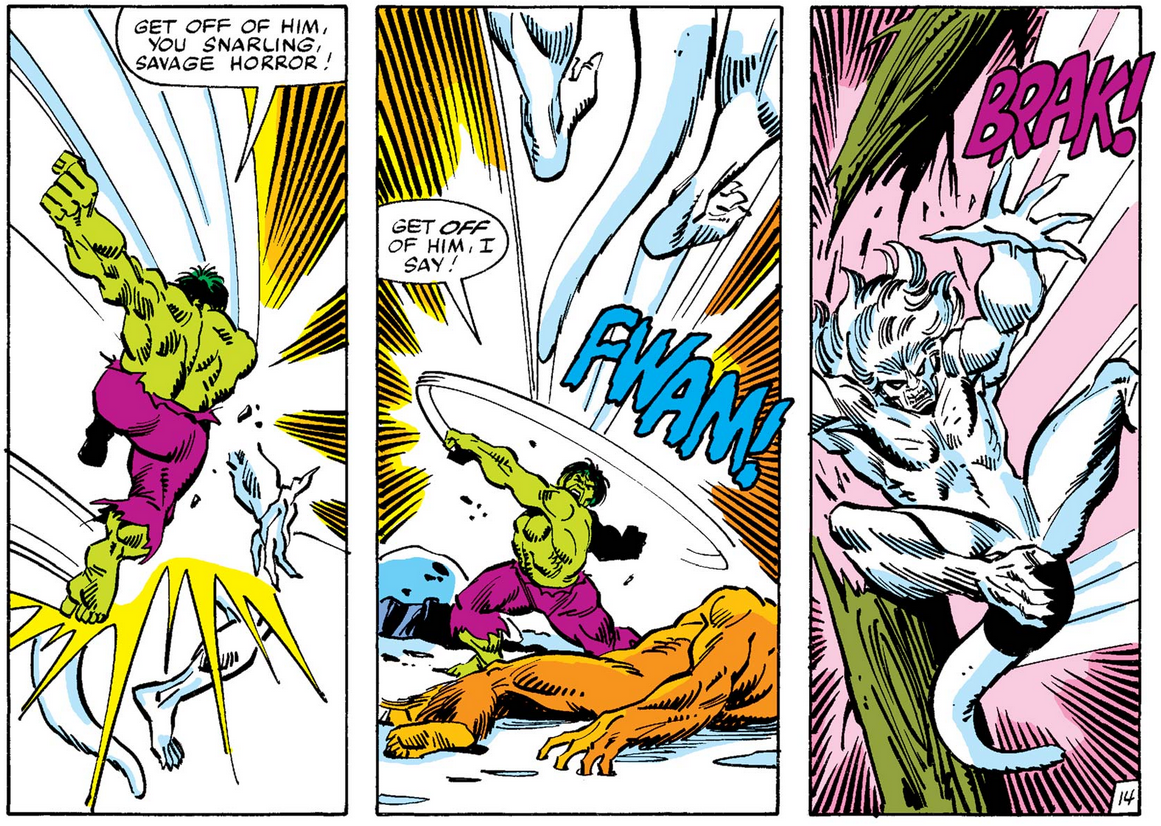 10. The Incredible Hulk #264: He Flies By Night! I am such a giant fan of the Night Flyer — an obscure Kirby Kite-Man-but-Awesome creation I wrote about for the King’s birthday — I knew I was putting this issue on this list the minute I saw him. He gets hired to kill the Hulk and he actually accepts even though his one super-power is hang-gliding. The guy is a stone-cold psycho. (Half-Sal Punch: Involving psychic feedback, not a punch.) 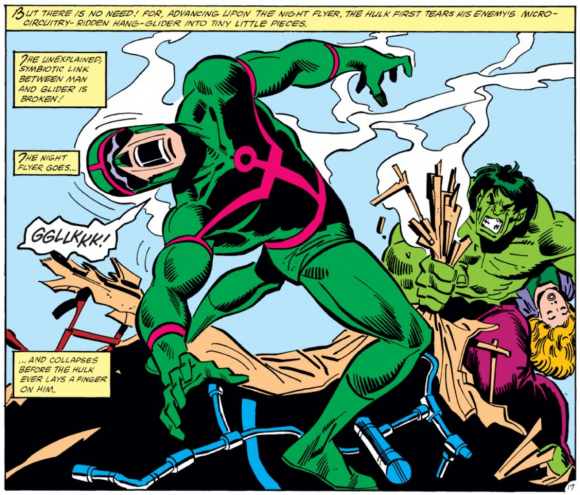 9. The Incredible Hulk #254: Waiting for the U-Foes! This is the first appearance of the U-Foes, who all have pretty great designs. I wonder if Sal did these himself. They are basically “What if the Fantastic Four were giant a-holes?” (This means that when we do get an MCU FF movie, the U-Foes will be the bad guys, because in 90 percent of MCU movies the villain is Evil-Version-of-Hero.) Bill Mantlo loved these guys, and they are the most frequently recurring villains during his and Sal’s run. In this first outing, Hulk accidentally defeats them by setting all their powers against each other. 8. The Incredible Hulk #210: And Call the Doctor… Druid! Technically-the-first-Marvel-Hero Dr. Druid tries to recruit the Hulk to help him defeat a crazed extradimensional wizard, except Bruce Banner has sworn never to turn into his green alter-ego ever again. Yeah, good luck with that. Being confronted by lance-wielding motorcycle knights changes his attitude pretty quickly, leading to the rare two-handed reverse Sal-Punch: 7. The Incredible Hulk #269: Enter the Hulk-Hunters! A bunch of alien Hulk foes come to Earth to recruit him for some sort of Rebel Alliance. Ol’ Jade Jaws gets very Han Solo and resists these attempts to the bitter end. The recruiters get Sal-Punched for their troubles: 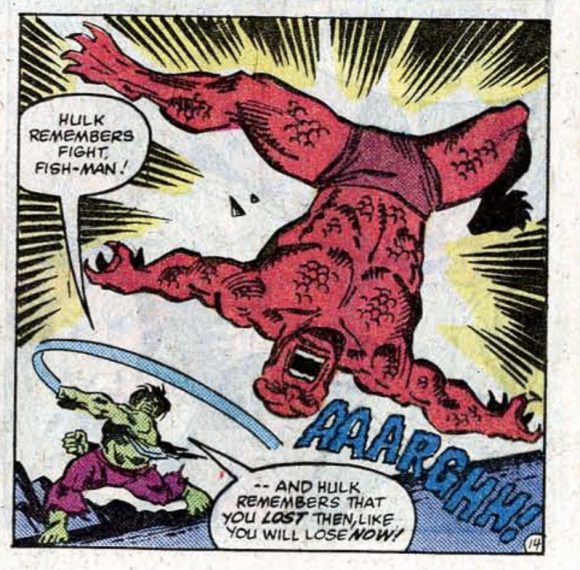 6. The Incredible Hulk #217: The Circus of Lost Souls! As a reader and as a writer, I am inclined to favor clever little done-in-one stories rather than huge sprawling epics, because they’re harder to execute for writers and artists. Here, Buscema quickly and expertly renders a bunch of circus freaks on the lam, protecting a girl with a mysterious secret. When they come across Ol’ Greenskin he takes up their cause as well, leading to inevitable conflict with their pursuing boss, OG Hulk villain the Ringmaster. Buscema had a million inkers on his run; Ernie Chan does embellishing duties here and the results are exceptional.

The entire Circus of Crime gets Sal-Punched! 5. The Incredible Hulk #198: The Shangri-La Syndrome! To paraphrase a classic comics meme: Collector, you just brought the Hulk and Man-Thing onto your spaceship, kiss that baby goodbye! I love it when Buscema gets to throw a crazy variety of monsters at us from across space and time. Bruce Banner meets all the Earthlings that the Collector has captured over the centuries and thinks he’s doing the right thing by turning into the Hulk and liberating them. Once he gets back to Earth he learns the hard way that this maybe wasn’t the smartest idea. (I used this issue’s Sal-Punch as the example above)

4. The Incredible Hulk #265: The title of this issue is an extremely long and famous Rolling Stones lyric I am not going to retype. This happens to be the first comic I remember buying with my own money, and I read it until it fell apart. Rick Jones has been captured by the Corruptor, who has taken over Hulk’s brain, and when he tries to get Rick to summon the Avengers so he can corrupt them too, the radio signal goes awry — i.e., the exact same set-up as The Avengers #1 — and Rick accidentally summons a bunch of random heroes who become the Rangers, which is Texas’ Alpha Flight.

As a 10-year-old I came up with a 500-issue run starring the Rangers in my head, which, I am certain, sold millions of non-existent dollars, won a bushel of Imaginary Eisners, inspired a billion-dollar fantasy film franchise, and I could not tell you a single plot point of that saga today.

The important thing here is Hulk gets Sal-Kicked. BY A GHOST HORSE. AND THEN HE SAL-PUNCHES THE GHOST HORSE RIGHT BACK. (SICK GUITAR RIFF) 3. The Incredible Hulk #248: How Green My Garden Grows! Jarella has been dead for 42 issues and Gamma Base has been keeping her corpse all this time because they are dicks. Hulk tries to bring it back to her home planet in the Microverse, only to find the burial ground has been taken over by the Gardener, who has Adam Warlock’s Infinity Ston — er, Soul Gem, and a bad attitude to match. A poignant issue that gives Jarella a much better send-off than she got when she was knocked off almost four years earlier. Even better: the two-handed Sal-Punch, rarely seen in the wild. 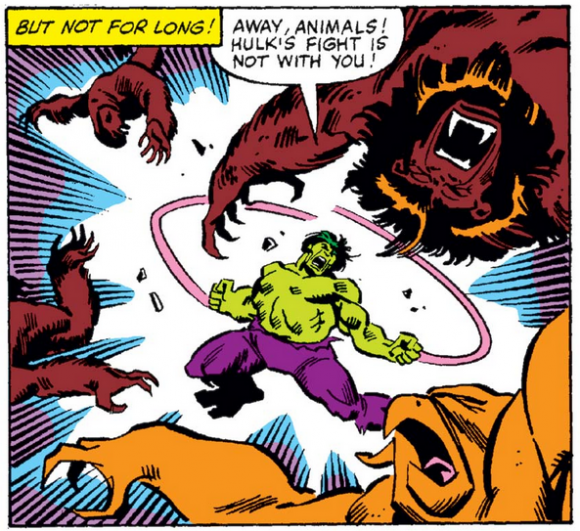 2. The Incredible Hulk #271: This, the first appearance of Rocket Raccoon, has a very long title riffing on the Beatles song his name is taken from that I also don’t feel like typing out. The story is kind of a weak parody of that song that I’m not even sure Beatles superfans appreciate, but Buscema gets to draw talking animals and space battles and I will never get tired of Hulk Sal-Punching evil clowns: 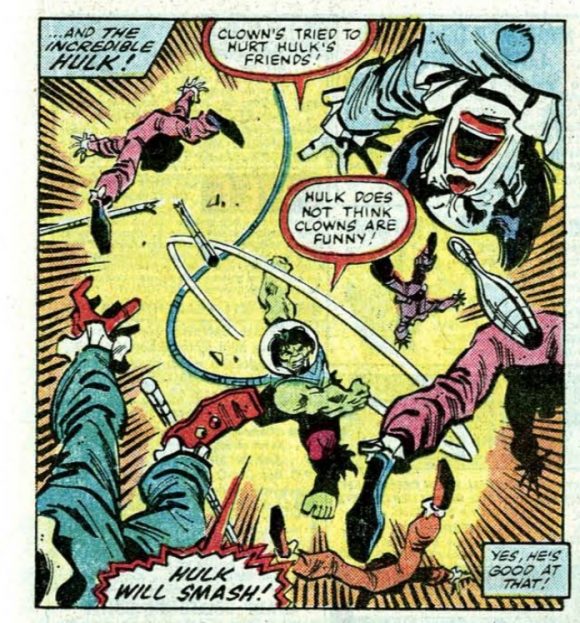 1. The Incredible Hulk #290: Unholy Alliance! Ms. MODOK. I mean, really, do I need to say anything else? Sal Buscema makes this work. Not to be confused with the far inferior MODAM. Ms. MODOK. Accept no substitutes.

MIZZ MODOK!!! She even gets to Sal-Punch! 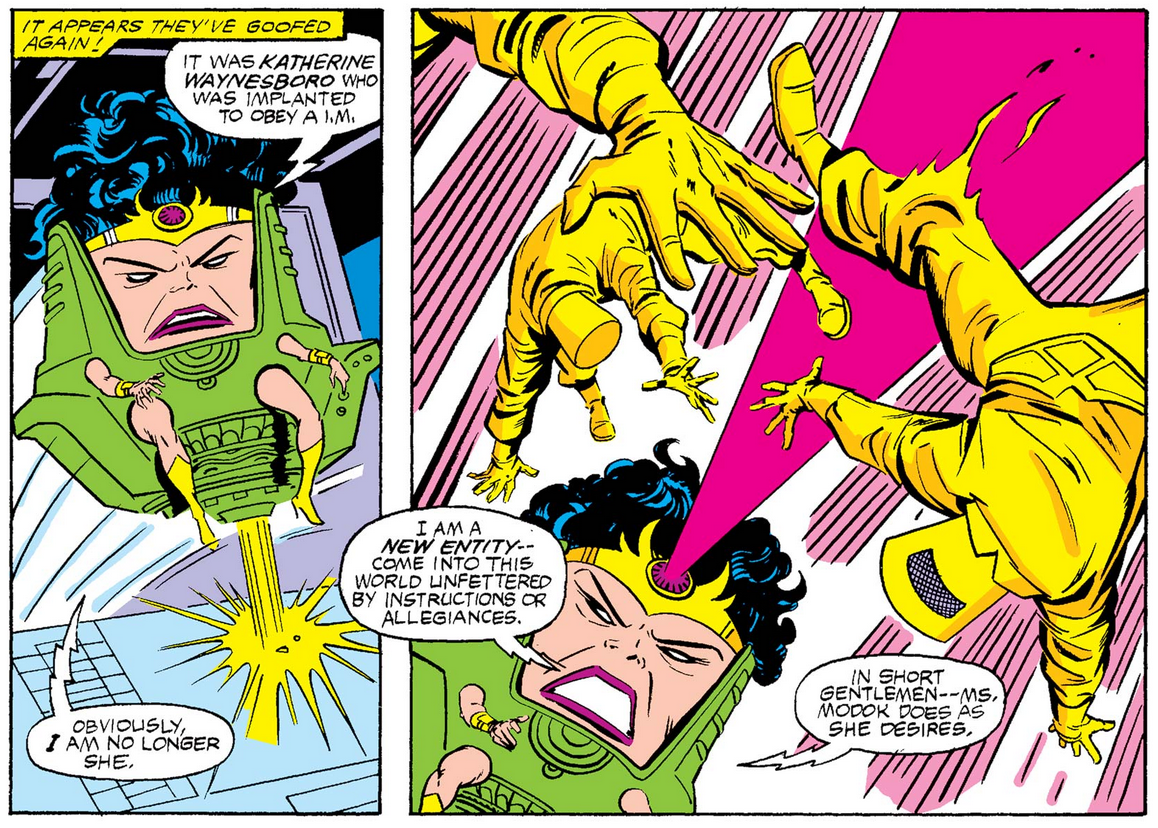 NOTE: Though on paper Buscema’s last issue is #309, his regular inker starting with #291, the great Gerry Talaoc, kind of overwhelms him for the rest of his run. Talaoc is such a dominant inker that in this re-read I didn’t realize Buscema had been replaced fully three issues after the fact — and he had been replaced by Mike-freaking-Mignola, of all people. Talaoc’s inks are the only circumstance under which Mike Mignola could be confused with Sal Buscema.

Comics writer Fred Van Lente has a new comic out now with frequent collaborator Ryan Dunlavey — The Comic Book History of Animation, from IDW. Pick it up!