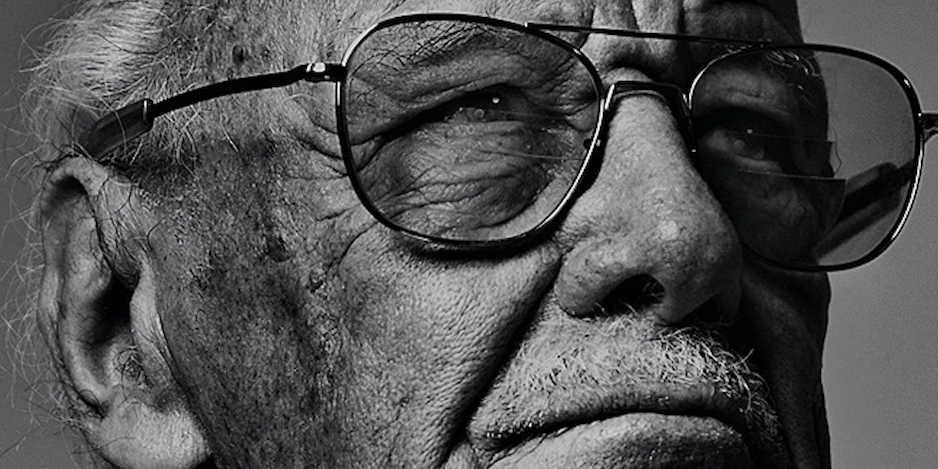 13th Dimension columnist Fred Van Lente is a comics writer, historian, and playwright, who has chronicled the relationship between Stan Lee and Jack Kirby in the play King Kirby, written with his wife Crystal Skillman.

I grew up on the words of Stan Lee. As a kid in the 1970s, I devoured the Pocket Books reprints of the original runs of Fantastic Four, Hulk, Doctor Strange and Amazing Spider-Man. Lying beside my laptop as I type this is my childhood copy of his Origins of Marvel Comics, still covered in my toddler marker scrawlings.

The 1974 cover of that book pretty much sums up the myth of Lee, as brought to life in my mind: Lee’s fingers hammer at a typewriter, from which spring all your favorites: Thor! The Thing! Human Torch! Sub-Mariner! They all came from him! And only him! After all, “Stan Lee” is the only name of the cover!

Between the covers, Lee tells us in his trademark bombast how he came up with a bunch of high-concept superheroes — Monster Superhero! Teen Superhero! God Superhero! Blind Superhero!, etc. — that were then brought to visual life by his trusty sidekicks, artists like Jack Kirby and Steve Ditko. Being in his authorial presence was so much fun I didn’t really question that he was the one and only “Man.” 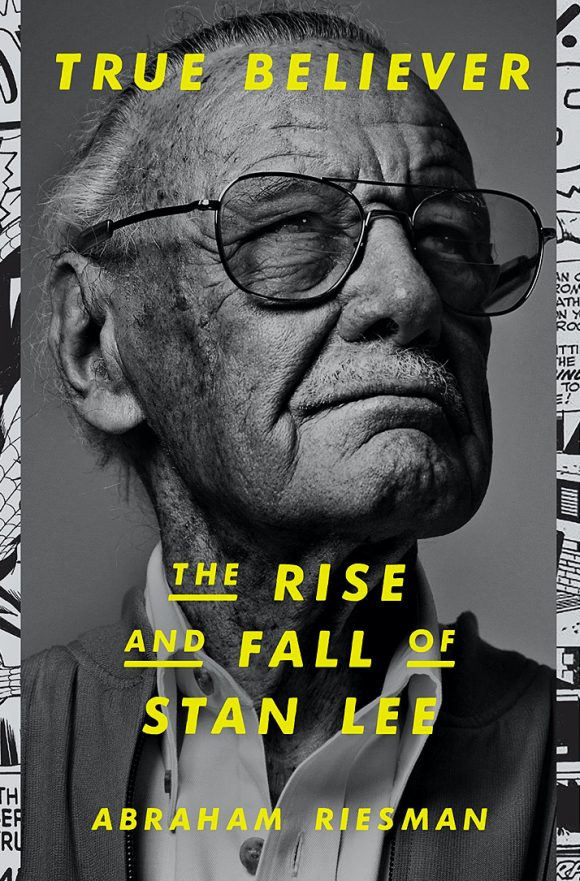 But as Abraham Riesman entertainingly explains in his new biography True Believer: The Rise and Fall of Stan Lee, the truth is that the greatest solo creation of the man born Stanley Lieber was “Stan Lee,” the omnipresent avuncular editorial voice of Marvel Comics, believed by the brass to be such an essential part of the company’s success that even after he left they slapped “Stan Lee Presents” at the beginning of every one of their titles, even ones, like Star Wars and GI Joe, that never had a thing to do with him.

I pulled out Origins of Marvel Comics as a refresher to write this review and realized for the first time that the cover features two Lee-appropriated Golden Age stalwarts, Human Torch and Sub-Mariner, that were absolutely created by other people (Carl Burgos and Bill Everett, respectively) long before Lee even began working at Marvel. That’s partly why the Stan Lee Myth is so frustrating to us non-believers: It only takes the slightest tug at the seams to make the whole thing unravel.

Honestly, though Riesman has brought, as the kids say, receipts, the first part of True Believer and the opening to Origins of Marvel Comics tell basically the same story, that of a dissatisfied functionary at a relative’s second-rate comic book company desperately trying to figure out some side hustle to bring him fame and fortune. But then he accidentally stumbles into that fame and fortune at his day job, when Jack Kirby draws Fantastic Four #1 for him, making the publisher a cultural phenomenon in the 1960s, and Lee its public face.

Where True Believer and Origins radically diverge, as one would expect, is that when Lee is no longer the sole arbiter of the Marvel story, his role becomes re-contextualized in a little thing we used to call “reality.” For example, Riesman goes further than most cultural critics to point out that there is absolutely no real evidence that Stan Lee had anything to do with the creation of Fantastic Four #1 other than maybe the direction to Jack Kirby, “do a team superhero book.” (Granted, Jack Kirby’s story of how he came up with it solo doesn’t hold water either, but we know he, you know, drew it.) 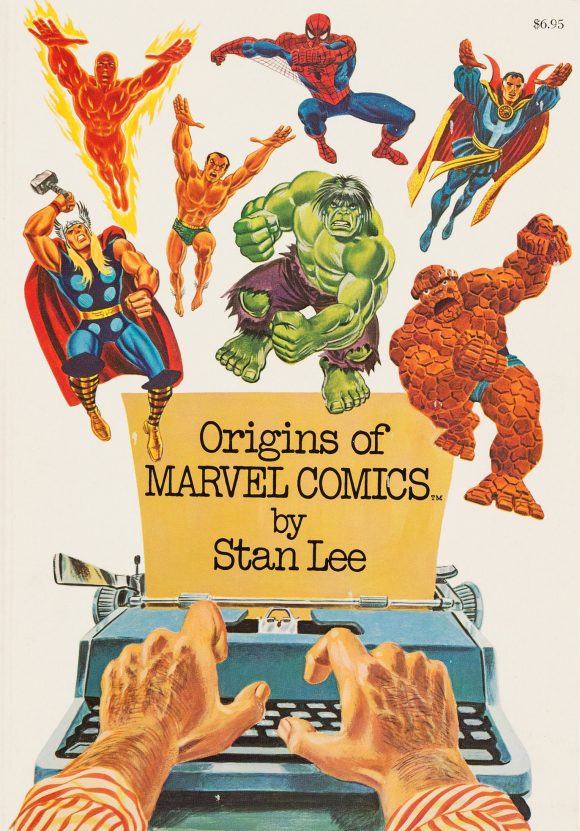 The most famous sequence in Amazing Spider-Man was 100 percent the doing of Steve Ditko. Wally Wood quit Daredevil once he realized he was coming up with all his own stories and Stan Lee was taking the credit—and the money!—for it.

So when I say I grew up on the “words” of Stan Lee, I was being specific. He created very little by the way of stories and characters; his artists took care of that. Lee added the words in the lettering once the comics pages already came in, already plotted, ensuring that his editorial voice would dominate.

Now, don’t get me wrong: That is not nothing; in fact, I would very much agree that his style was a major contributing factor to Marvel’s success.

But the truth is, Marvel’s artists were not Lee’s sidekicks: He was theirs. Yet he got all the glory of the title hero. 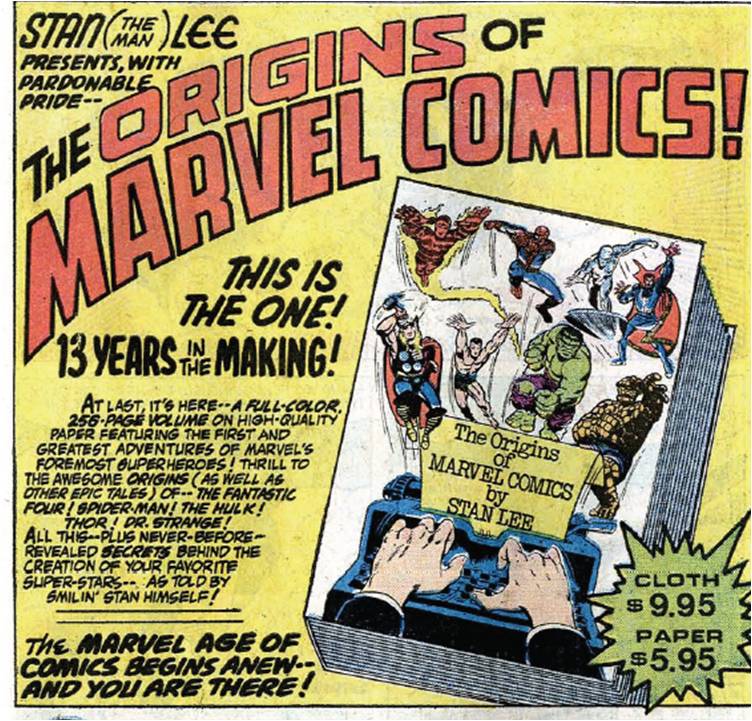 The status quo sorted itself out by the end of the decade: Artists who were cool with Stan’s “Marvel Method” stayed and thrived at the publisher: John Romita Sr., John Buscema, Gil Kane and many others. Those who got fed up playing second fiddle, quit: Wally Wood, Steve Ditko, and ultimately, Jack Kirby. Marvel produced a lot of great characters, but they could have also had Darkseid, Orion, the Demon, Mister Miracle, the Question, Kamandi, OMAC, Captain Atom, Hawk and Dove, the Creeper, and even the THUNDER Agents, plus countless unrealized others, had Lee (and, to be fair, the American comic book industry as a whole) learned how to share credit.

Kirby stuck it out the longest; he had created the most, so he had the most to lose by breaking with the company. (Tellingly, Lee left Marvel not long after Kirby, likely realizing the goose with the golden eggs had flown the nest. Riesman wisely spends little time on Lee’s second, post-Marvel, period of fruitless hustling, mostly in Hollywood.)

I’ve been fascinated by Kirby’s story for decades; my wife and I wrote a play about it, King Kirby, which, since you brought it up, has gotten the full audio drama treatment from Broadway Podcast Network. You can download it for free here. 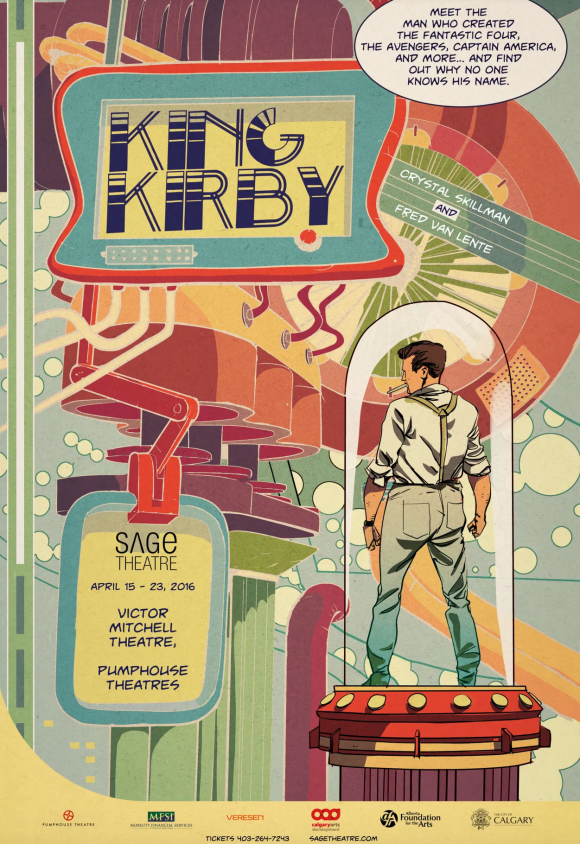 Riesman’s excellent book has two flaws. The first comes at the very beginning, which is an exhaustive (and to this reader, tedious) Kavalier & Clay–style deep dive into the Romanian-Jewish origins of Lee’s family. As Riesman himself later makes abundantly clear, Lee militantly ignored these origins his whole life (in marked contrast to, sorry, Jack Kirby). They are germane only if you give equal weight to what people “are” as to what they do. There seems to be a vague attempt to tie Lee’s hucksterism to a larger Jewish tradition of… something, something, but that amounts mostly to hand-waving instead of a reasoned argument.

The second, bigger knock doesn’t stem from the author, but his subject. The “Fall” part of the book is as long as the “Rise” part and deeply depressing. I used to think you could demarcate Lee’s life between the decade-long fertile period working with Kirby and the fallow periods before and after, but Riesman has made me see that there is a second, equally important dividing line, which is Ang Lee’s Hulk (2003), the first Marvel movie in which Stan Lee actually has lines.

Once “The Stan Lee Cameo” became something anticipated by millions of moviegoers worldwide, Lee’s fame leveled-up beyond local-comic-con-headliner and attracted a never-ending parade of parasitic hangers-on. These schemers range from world-class F.O.B. (look it up, non-’90s kids) con-artist Peter Paul, all the way down to guys who don’t deserve a one-star seller’s rating on eBay.

If, like me, you have spent a significant chunk of your adult life at comic book conventions, you have met literally hundreds of these cringeworthy wannabe big-shots. The realization that the most famous person your industry has ever produced let them completely take over his life and rob him blind, well, that’s a huge bummer.

Riesman becomes a significant character in his own book in its latter third, as he tries to report for (in this case, the aptly named) Vulture on the circular firing squad of the still-living Lee’s entourage, which included, most sadly, his wife and daughter. For him, and the reader, it’s like untangling any other ugly family dispute: You exhaust yourself battling trivialities.

Kirby and Ditko partisans who took dark glee in watching their nemesis get ripped off by hucksters vastly more venal than he ever was should have their Schadenfreude cured by Riesman’s harrowing account: this is not-even-on-my-worst-enemy stuff.

Lee has his partisans too, of course, and on Twitter, Riesman has shared the death threats, shit-posts and Facebook hate he’s received – before the book was even published. If the last few years have taught us nothing else, it’s that many, many people hunger to believe in someone, anyone, as a Great Leader, and will attack anyone who says otherwise, not on the basis of opposing facts, but on the basis of opposing Belief, that you’re desecrating their personal religion. 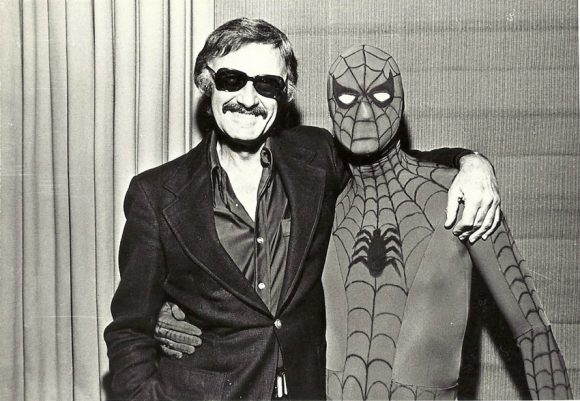 “Stan Lee just wanted people to be happy,” they say, as if he was Santa Claus, and good intentions make it OK that Santa took sole credit for creating all those toys… when all he did was deliver them, right?

Friends, vaccines don’t cause autism, Antifa didn’t attack the U.S. Capitol on January 6, and Stan Lee did not create the Marvel Universe. I am old enough now to know that those of you who need to hear this message will ignore it, and for those you who already knew it, True Believer: The Rise and Fall of Stan Lee is more of a reminder than a revelation. But it is extremely well researched, well reported, and well written, and I devoured it in a single (five-hour-ish) sitting. I bet a lot of you will too.

And, once again, if you want another side of this story in historical drama fashion, listen to King Kirby on Broadway Podcast Network.

I know, I know. It’s probably a little crass to plug my own stuff while reviewing another guy’s book. But what can I say?

I grew up on the words of Stan Lee.

True Believer: The Rise and Fall of Stan Lee is out now from Crown. It lists for $28. You can also click here to purchase King Kirby in paperback.

— To JACK KIRBY’s Fans: We’re Better Than This, by JOHN MORROW. Click here.