The TOP 13 CATWOMAN COSTUMES Ever — RANKED

UPDATED 3/2/22: The Batman opens this week and one of the major characters is Zoe Kravitz’s Catwoman. Perfect time to re-present this April 24, 2020, piece timed to the Feline Fatale’s 80th anniversary date. Dig it. — Dan

On April 24, 1940, Batman #1 — one of the greatest single comic books ever — was published. It not only gave us several rip-roarin’ stories, it gave us two villains who would stand the test of time and become pop-culture titans in the own right: Catwoman and the Joker.

Both the Feline Fatale and the Clown Prince of Crime are celebrating their 80th anniversaries and DC this month planned 100-page tribute issues for each. (Click here.) Unfortunately, both have been delayed because of the coronavirus pandemic — but the calendar keeps flipping and it’s April 24, so as we have over the last couple of days, we’re going ahead with our own spotlight on these two classic characters. 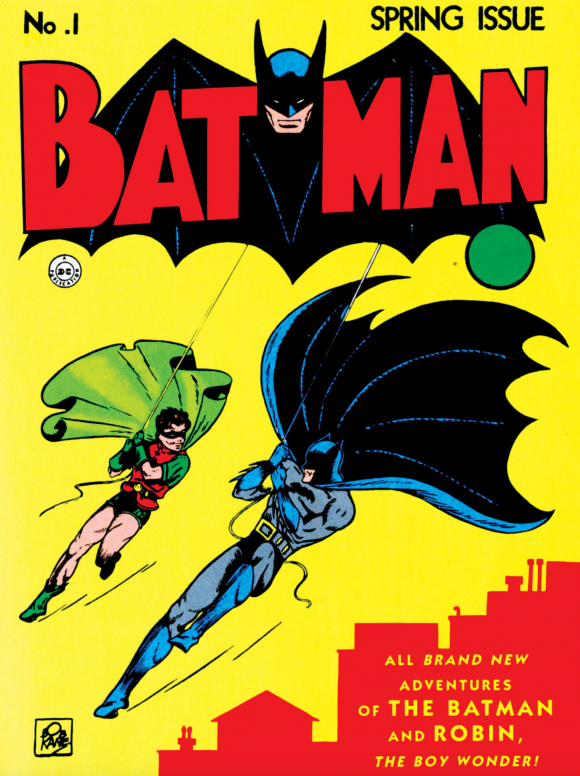 You can click here to find Chris Franklin’s look at the Joker. Here is Anthony Durso with Catwoman:

A cat may have nine lives, but if you’re Catwoman you have more costume changes than that.

13. Golden Age Cat-Woman (1940). By the time of her third appearance (in the pages of Batman #3), Selina Kyle transformed from the Cat to Cat-Woman, complete with a super-villain costume topped off with a bizarre cat’s head. There would be alterations to this look for a few years until it was dropped in favor of the now-standard cat-eared cowl. 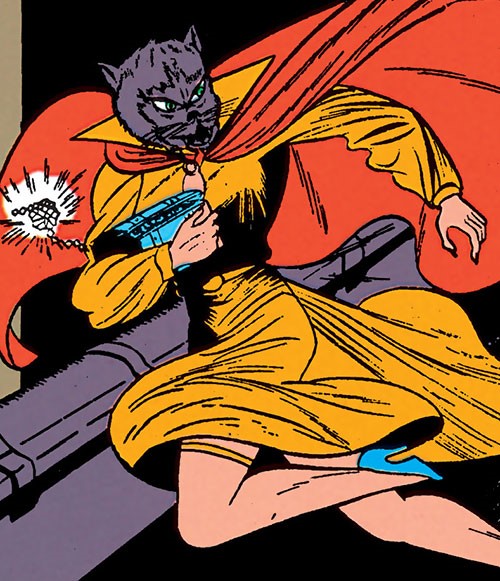 12. The Cat (1940). When she first appeared in the pages of Batman #1 (1940), the yet-to-be-named Selina Kyle was simply known as the Cat. This version of the Felonious Feline was a jewel thief who was also a master of disguise. With no costume, the Cat is best remembered for the revealing green dress that showcased her assets. And while Robin saw right through the BS, Batman’s been the smitten kitten ever since. 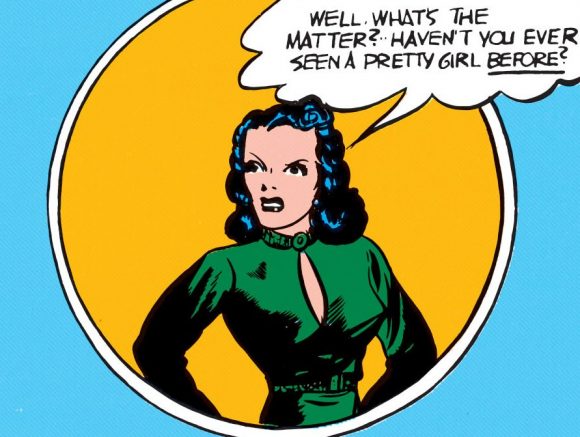 11. Silver Age (1966). When Catwoman made her first Silver Age appearance in the pages of Superman’s Girlfriend Lois Lane #70 she was sporting a costume similar to the last one she wore in the Golden Age, trading in the purple dress portion for a sleek black catsuit. 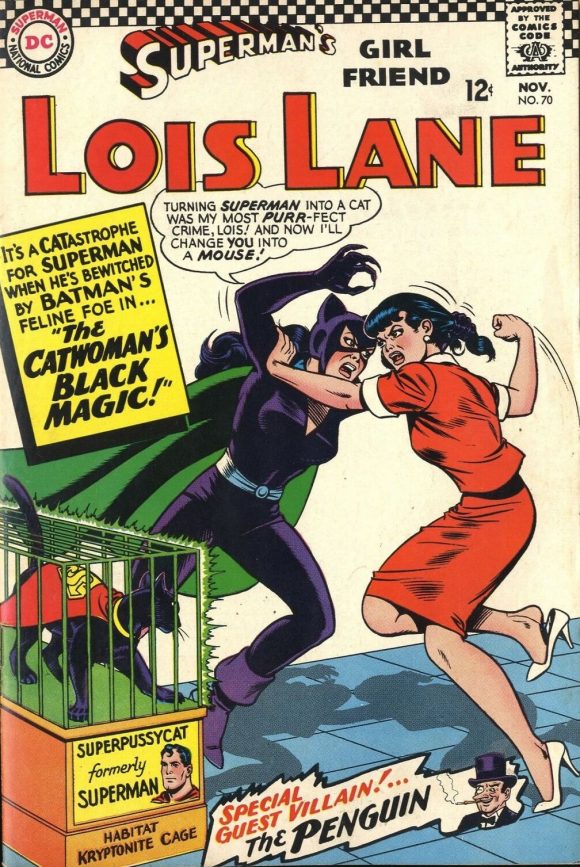 10. Batman: The Animated Series (1992). Partially inspired by the post-Crisis (1987) and Batman Returns (1992) looks, this streamlined outfit was initially grey with black boots and gloves. When it was redesigned in 1997, it became all black — and curiously Catwoman’s skin tone took on a shade of pale blue. 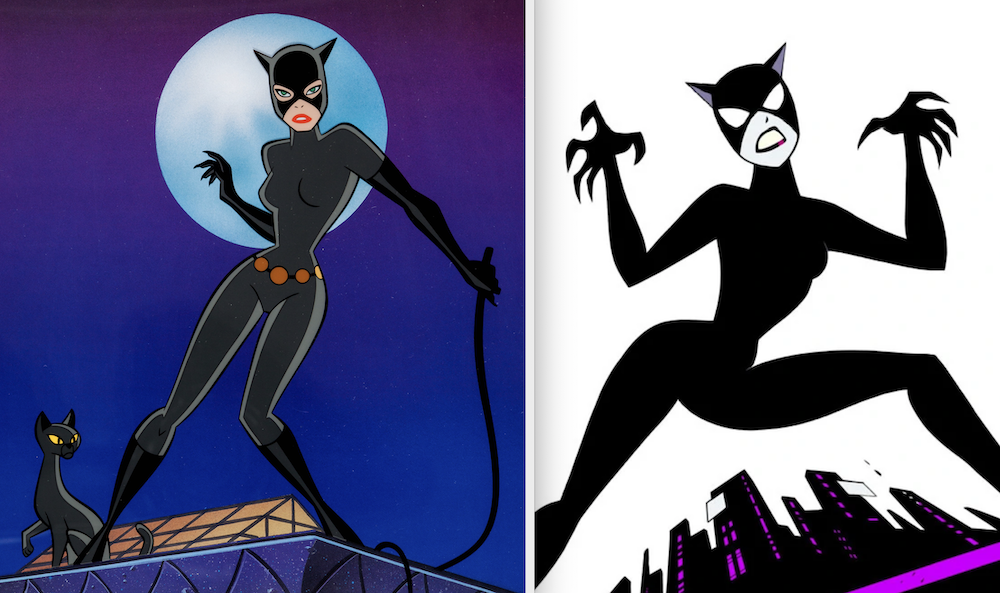 9. The Filmation Era (1968, 1977): When Catwoman first appeared in 1968’s The Adventures of Batman, her catsuit and mask were similar in style to her live-action counterpart, albeit with a green/white color scheme instead of black and gold. When Filmation rebooted the escapades of the Caped Crusaders in The New Adventures of Batman, Catwoman was given a complete overall from her previous version. With long brown hair, this Catwoman slinked around in an orange costume emblazoned with a cat’s head logo on her chest (while keeping the white gloves and boots). Whichever version you prefer, it can’t be denied that she was a formidable foe for the Dynamic Duo. (See also #5.) 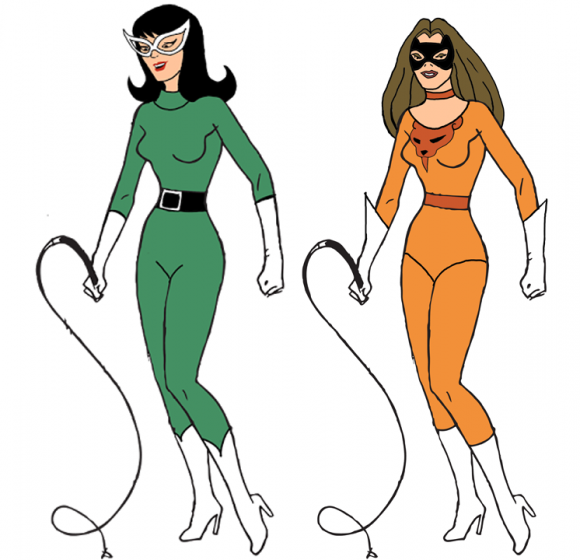 8. Mego Swashbuckler (1969). When the Batman TV show (1966-68) was on the air, cartoon and comic book versions of Catwoman’s costume were designed to reference the silhouette of the Julie Newmar suit, while toning down the sexuality. By the time the show was cancelled, the comic Catwoman was redesigned with a look that seemed very similar to the Harvey Comics character the Black Cat from the Golden Age. This was the outfit that Mego used when it released its Catwoman figure in 1974. Kids all over America were confused that this Catwoman looked nothing like the one that was appearing daily on their TV screens in reruns. 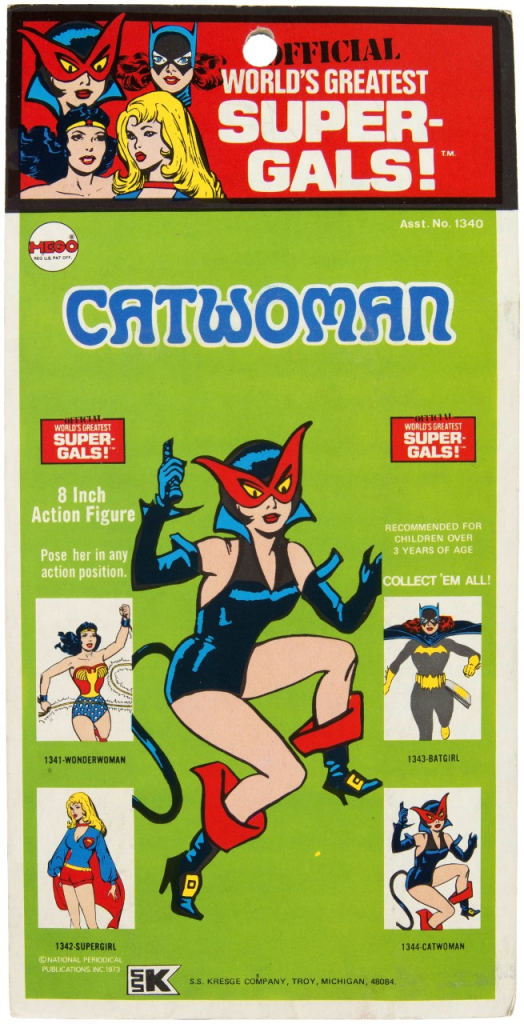 7. Post-Crisis (1993). After Batman Returns (1992), Catwoman was given her own ongoing series for the first time. The Jim Balent-designed costume was reminiscent of the (bland) Year One look, combined with the Batman: The Animated Series (also 1992) costume. While the purple and black silhouette of the suit was mostly consistent, Catwoman’s, um. chest area, seemed to have some augmentation as time went on. It WAS the ’90s after all. 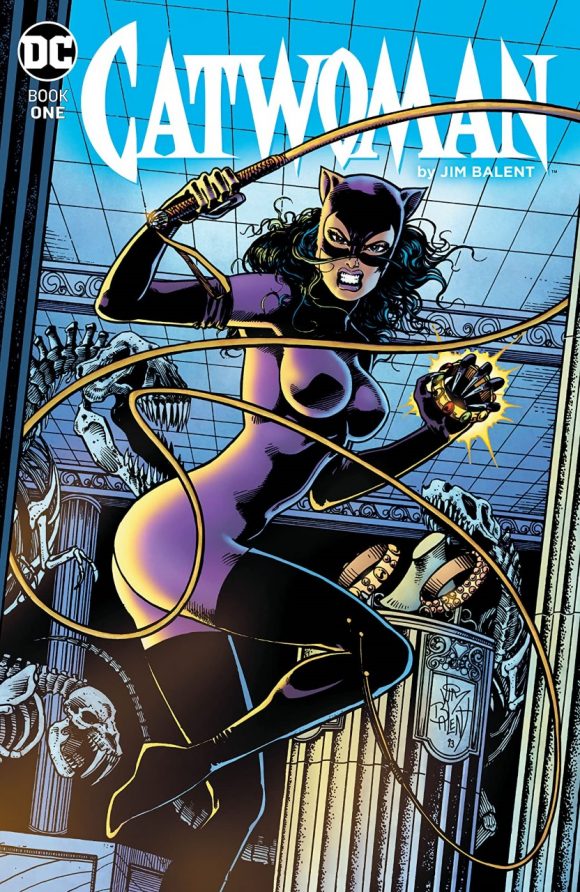 6. Copycat (2018). Following her wedding to Batman that wasn’t, Catwoman once again received her own solo series. Joelle Jones (artist AND writer) redesigned the catsuit and gave it a sleek black, classy look that harkened back to Michelle Pfeiffer’s costume, but with minimal needle work.

5. Silver Age (1967). Once again inspired by Julie Newmar, the comic book Catwoman was given a similar skin tight catsuit with matching necklace. But instead of black Lurex, this costume was bizarrely green scaled. When the TV show was gone, so was this costume. Personally I wish it had hung around awhile longer. (See also #9.) 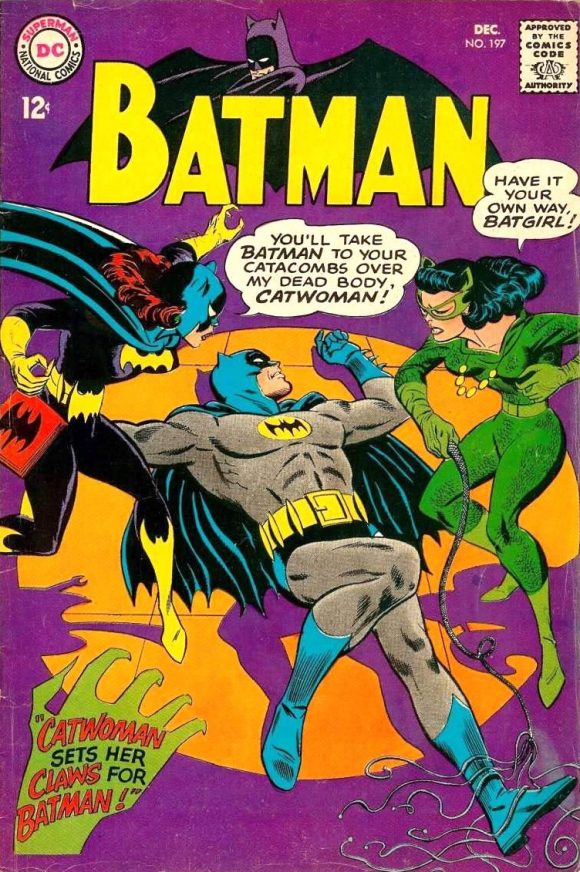 4. Batman Returns (1992). Michelle Pfeiffer’s take on the mousy (and blond-haired) Selina Kyle took a sharp turn when she was revived by an alley full of cats. Suffering a psychotic breakdown she did what any (in)sane person would do and whipped out her sewing machine. Fashioning an all-black latex catsuit covered with more stitching than the Frankenstein monster, this Catwoman was a cut above the rest. 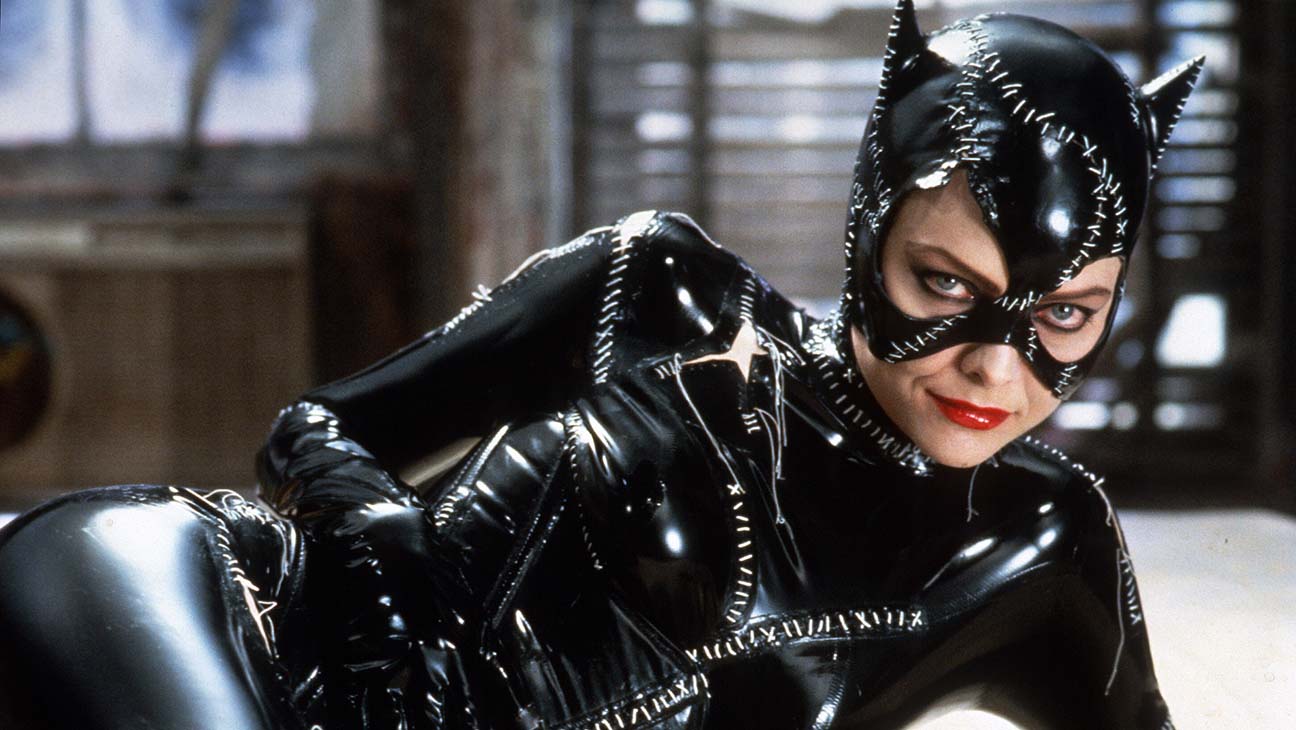 3. Modern Age (2001). With the release of a new solo series, the Princess of Plunder was once again given an overhaul in the costuming department. Designed by Darwyn Cooke, from a suggestion by Ed Brubaker and his wife, Catwoman was now attired in an Emma Peel-esque catsuit with aviator helmet and goggles. Eventually, the suit got tighter and the zipper would plunge farther and farther south, culminating in a series of memorable Adam Hughes covers. 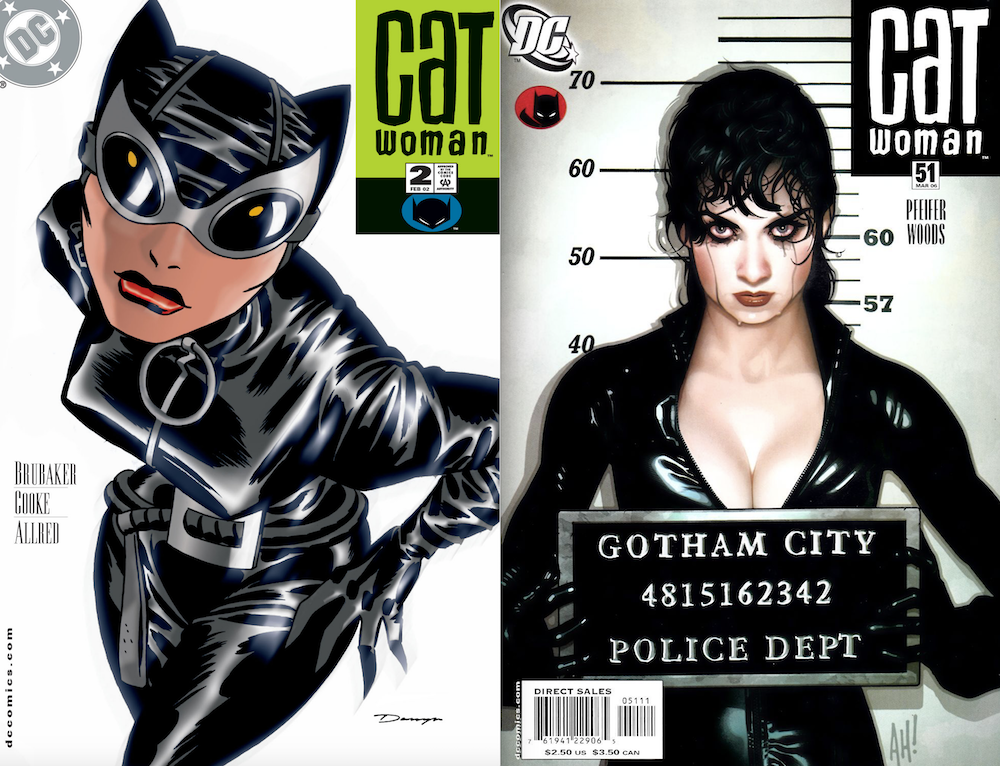 2. Bronze Age (1975). The classic Win Mortimer-designed Golden Age dress returned in the 1970s, but with a few tweaks: longer cape, longer dress (now with thigh high leg cuts) and calf-high boots. Ever present was Catwoman’s cat-o’-nine-tails whip. To me this is the most iconic comic-book version of Catwoman’s costume, as demonstrated by its inclusion in the famous DC Style Guide art by Jose Luis Garcia-Lopez. 1. Batman ’66. This is the costume that put Catwoman (and Julie Newmar) on the map for me. Probably my first crush at the age of 5. With her all-black, Lurex high-heeled catsuit and gold accessories (including her belt slung low around her hips) you can see why Adam West’s Batman would often get flustered around her. While many put Frank Gorshin’s Riddler at the top of the TV rogues gallery, Newmar’s Catwoman (she’s never called Selina Kyle) is a VERY close second IMO. Plus, it’s not just her relationship with Batman: Her scenes with an unenchanted Robin the Boy Wonder are often comedy gold. Unfortunately, Julie had prior commitments and couldn’t do the off-season movie (replaced by Lee Meriwether) and the third season (Eartha Kitt took over the role). And although each actress did make their own mark on the character and added something to the mythos, nobody filled out that costume like Miss Newmar. Thanks for everything, Julie. MEOW. 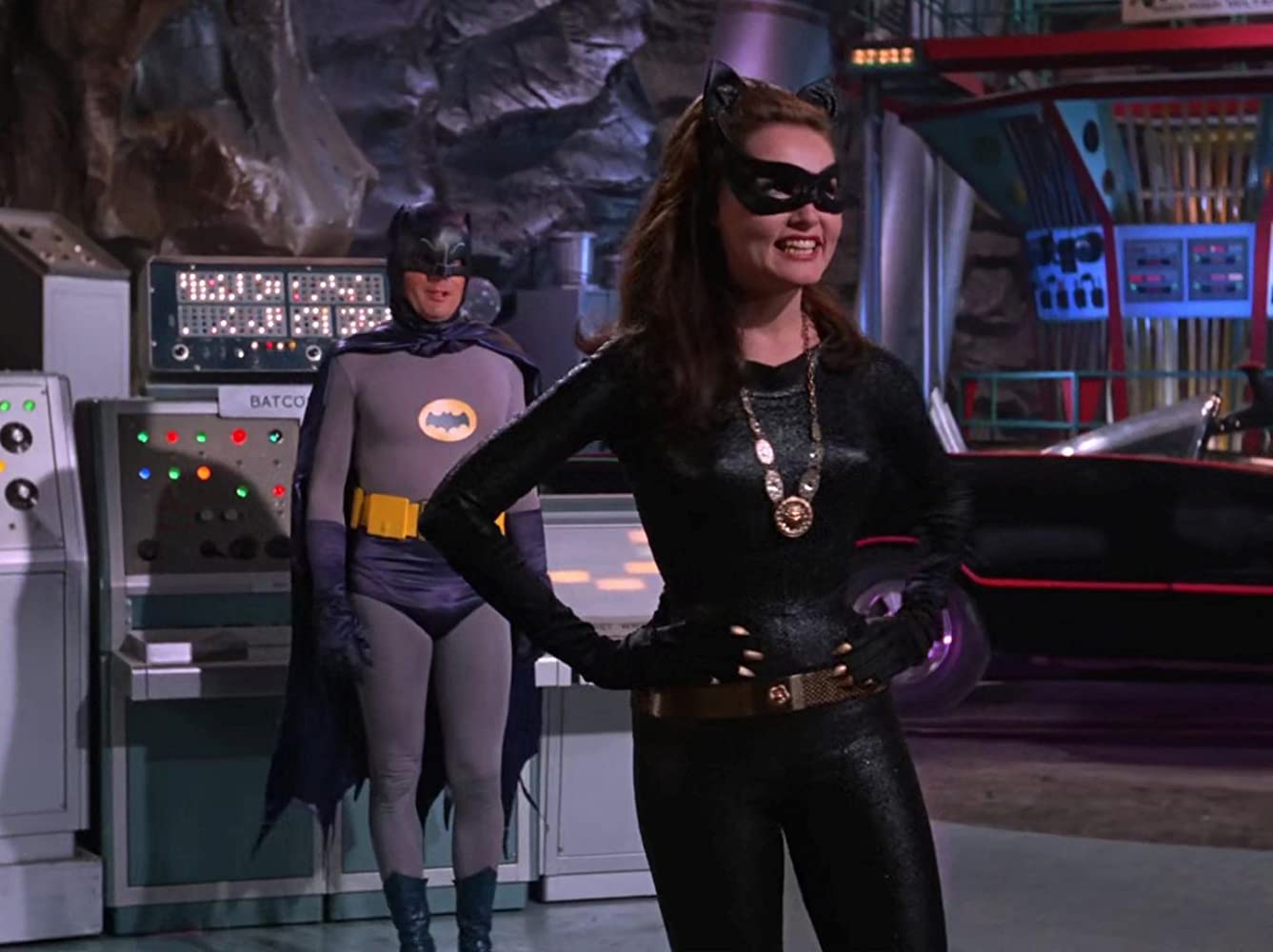 Anthony Durso is the owner of The Toyroom toy package customizing company (click here) and Retropolis Tees (click here), so make sure you check out his nifty wares.