The Secret Origin of TV’s SHAZAM!

“Chosen from among all others by the immortal elders — Solomon, Hercules, Atlas, Zeus, Achilles, Mercury…” 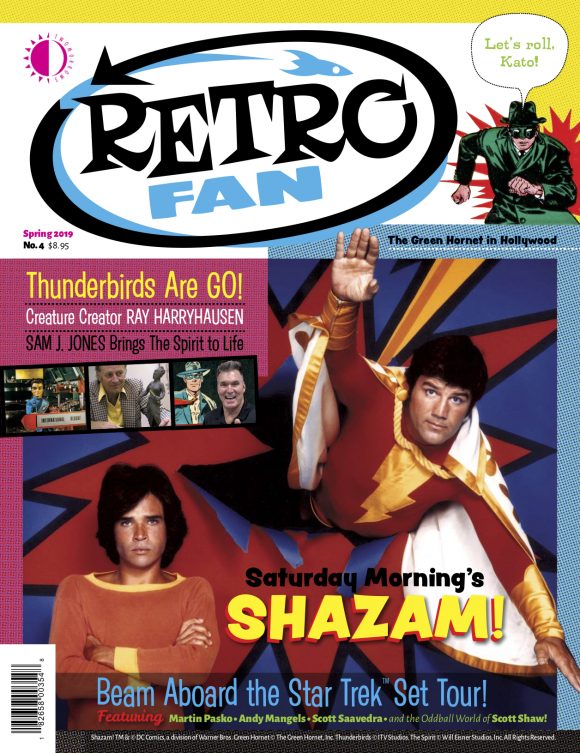 Well, editor Michael Eury and the folks at TwoMorrows’ magazine RetroFan are no dummies. They knew now was the perfect time to feature Shazam! on the cover of Issue #4, out March 20.

And we’re not dummies either (though that may be debatable), so we’re giving you an EXCLUSIVE EXCERPT from that cover story, by comics/TV historian Andy Mangels.

But first check out the Table of Contents: 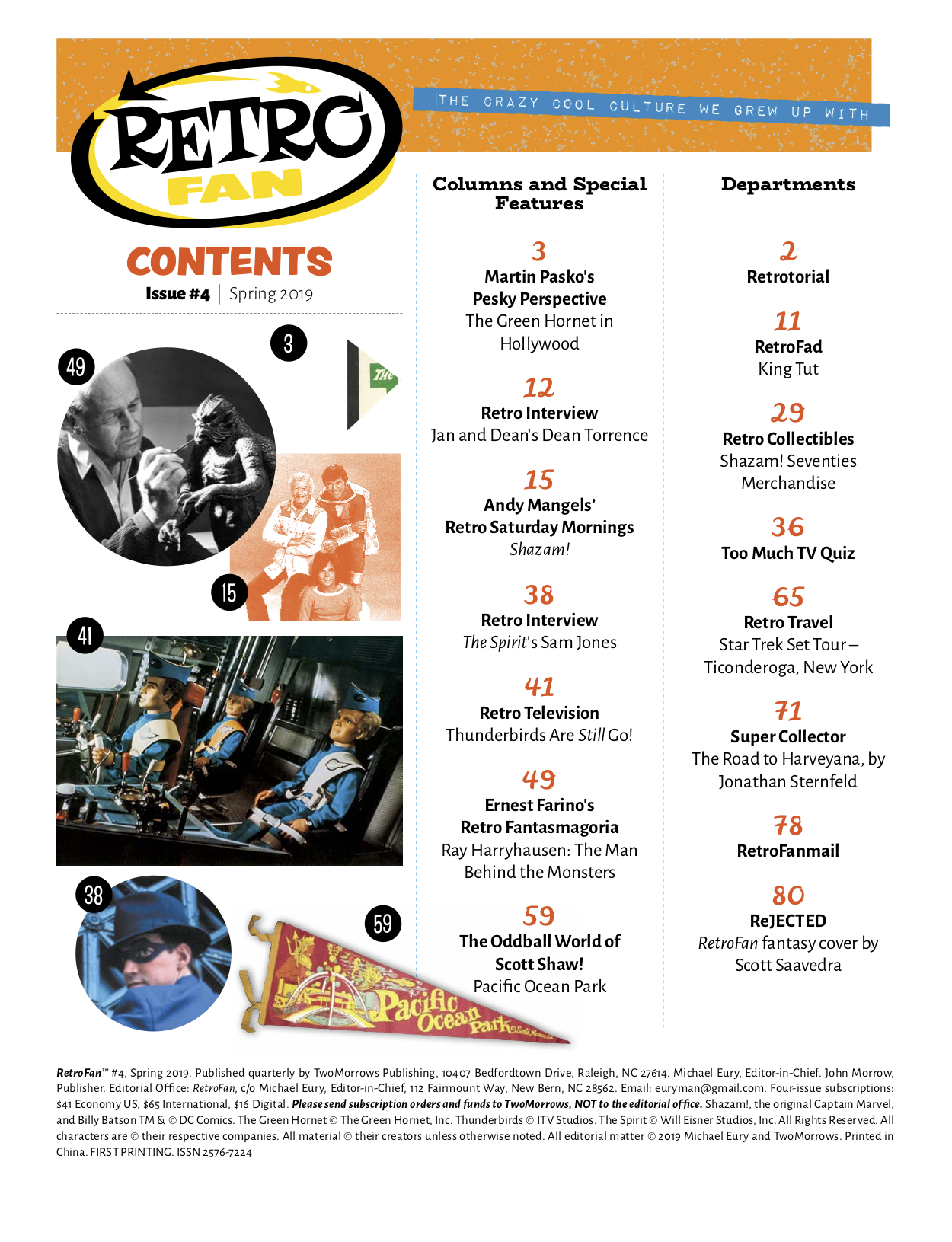 Some groovy stuff in there, for sure.

Anyway, back to the Shazam! piece: Mangels lays out in heavy detail how the show was conceived — from the spark of an idea, through the casting and filming — as well its ensuing impact.

Here, we present a selection that explains how Filmation acquired the rights to the Big Red Cheese and how the production company got the show off the ground.

There’s so much more in the mag, so I highly recommend you pick it up.

Meanwhile, check this out: 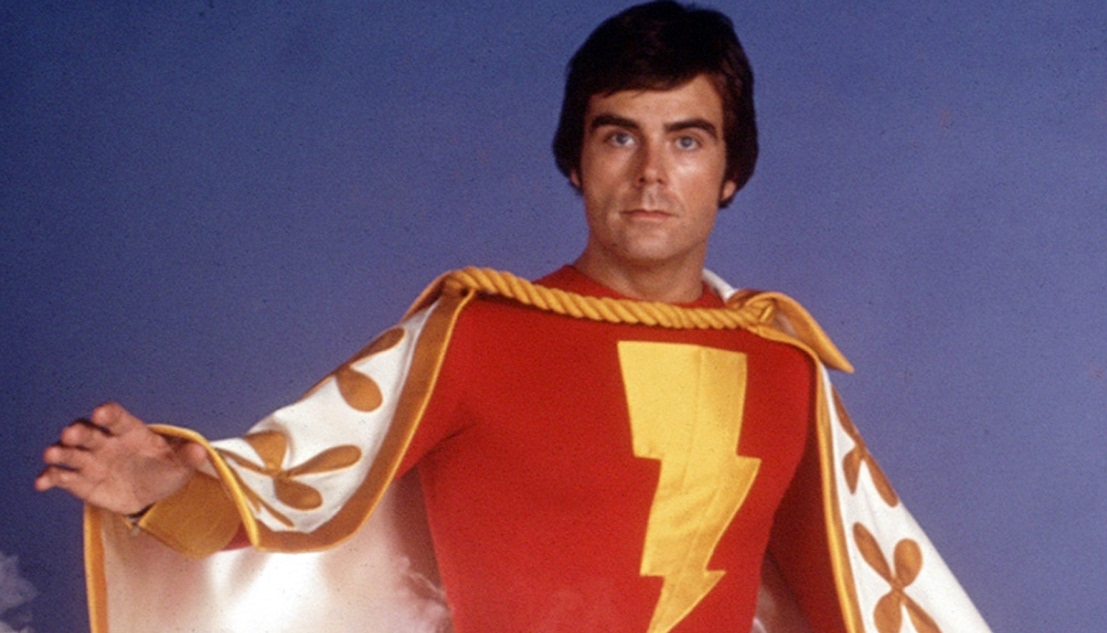 In 1972, National Periodical Publications (the latest name of the company yet to officially become DC Comics) publisher Carmine Infantino licensed the characters of Captain Marvel and his cast of friends and foes from what was left of Fawcett Comics. Because Marvel Comics had been publishing their own character named Captain Marvel since 1967, National was forced to name their new comic Shazam! A new comic series debuted in December 1972, with original artist C. C. Beck back to illustrate the stories.

It wasn’t long before Hollywood came looking for Captain Marvel again. (He starred in a 1941 serial.) Based in Reseda, California, Filmation Associates had been known mostly as an animation company, and they had a history with National. They had produced the popular Superman, Aquaman, and Batman animated series from 1966–1970, and even gave Wonder Woman her first animated appearance, in a 1972 episode of The Brady Kids.

Filmation was headed by producers Lou Scheimer and Norm Prescott, and they wanted to try something new. 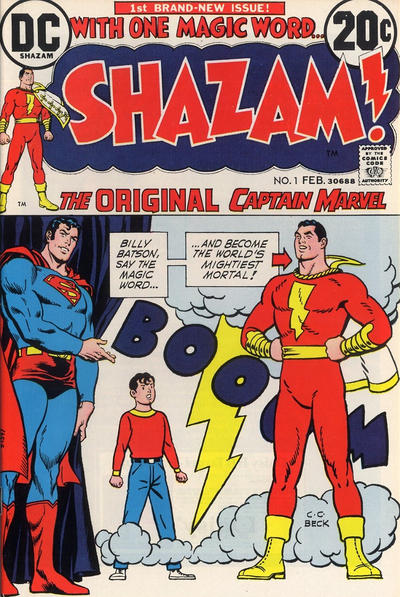 “We had our previous relationship with National/DC, but they had now licensed Superman and many of their other superheroes over to Hanna-Barbera for Super Friends,” said Scheimer in my interviews with him for the 2012 TwoMorrows book, Lou Scheimer: Creating the Filmation Generation. “So we licensed the animation rights to Captain Marvel and planned to do it animated. He was the closest thing to Superman that they had available, but for legal reasons we couldn’t call the show Captain Marvel—although we could call the character that—so it had to be titled Shazam!”

Filmation did a presentation for an animated Shazam! in 1974, which they showed to NBC, ABC and CBS. At CBS, Fred Silverman liked the concept, but asked Scheimer to do the show in live-action instead. Scheimer agreed, but changes had to be made from the comics, as putting other Shazam! characters such as Mary Marvel, Captain Marvel Jr., Tawky Tawny, and Mr. Mind would be cost- prohibitive.

“When we developed the show, we had to develop something that we could afford to do on Saturday morning, so we decided to do it all on location. We came up with the idea of Billy Batson and Mentor traveling around in a motor home. It worked because, with them traveling, we didn’t have to use stages for much of anything, and we could shoot it all outdoors.”

The Shazam! bible developed by Filmation was only three pages long, but it hewed to established lore to a point. Young Billy Batson was summoned by Mister Mentor to a secret underground lair, because he had been selected in “mystical fashion by the Six Elders.” Mentor had previously been Captain Marvel, but now needed to pass his powers on. According to the bible: “But, in accordance with the directives of The Elders, Billy’s ‘training’ was soon to take on greater challenge: ‘Life,’ itself—its problems; its peculiarities; its ramifications—was to become his ‘teacher’ and his testing ground, supplemented by his regular meetings with The Elders and the constant companionship of Mister Mentor, who was to accompany Billy on his ‘missions.’” Mentor was never to directly interfere, and was to “serve as an intermediate counsel and overseer, but would offer no solutions to the problems facing young Billy.” 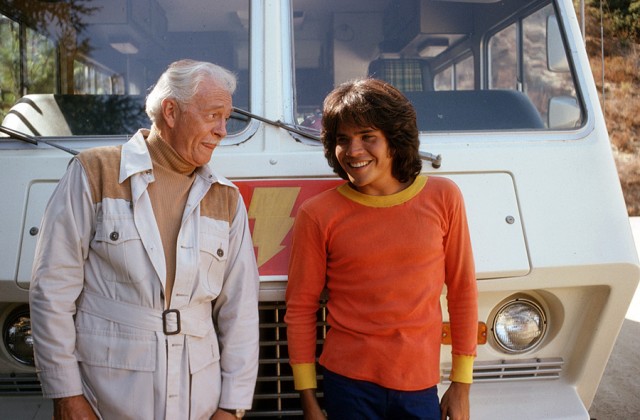 The show bible also introduced the idea that Billy would receive cryptic wisdom and omniscient parables from the Elders about whatever adventure he was about to encounter. Billy would recite before a blinking brazier a magic couplet: “Oh, Elders, fleet, and strong, and wise, appear before my seeking eyes!” The Elders would be animated—mostly only their mouths moved, with some optical effects on top—with Billy appearing before them in live action. Producers Scheimer and Prescott eventually provided the voices for the Elders.

“I did most of the voices for the Elders, and Norm did a couple, like Solomon,” said Scheimer. “By the way, if you’re wondering why the characters were called ‘Elders’ instead of ‘Gods’—despite some of them being mythological gods—you can blame the network’s Standards and Practices.”

Another element of the show planned from the beginning was a social conscience. According to the show bible, “The themes of the individual episodes will be pertinent, in terms of ‘contemporary’ life, and will reflect the types of ‘people’ problems with which today’s youngster comes face-to-face in his daily life; Billy’s constant resourcefulness and demonstrated ability to ‘cope’ with most of the problems presented to him will testify to the fact that, ‘there’s something each of us can do.’” 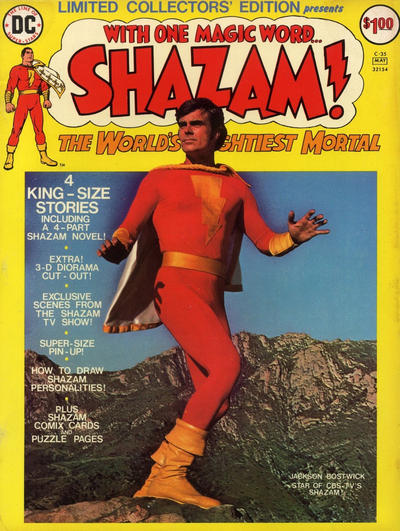 Filmation also made the decision to add tags to the end of each show, with the actors speaking directly to the viewers about the “morals” of the episode; these educational tags were not only due to changed rules about content for children’s television, but also because Scheimer felt it important to teach viewers something while entertaining them.

“We wanted them to have super-adventure elements, but we also wanted them to have educational stuff in them. We wanted to have Captain Marvel be the first superhero who would teach young people essentially the same kind of lessons that we were doing in Fat Albert, with a little bit more of interpersonal relationships and real-world issues. They were targeted to a slightly older viewer — junior high- and high-schoolers.

“The stories dealt with drug abuse, prejudice, peer pressure, stealing, handicapped people, cheating, lying, and all sorts of moral issues that kids grappled with. And, at the end of the episode, we’d have Captain Marvel or Billy come out and talk directly to the viewer in a ‘morals’ segment that reinforced whatever the message of the episode had been.”

At the end of March 1974, CBS announced their Saturday morning schedule, and Shazam! was on it. Warner Bros., which owned international distribution rights, immediately began marketing the series worldwide, without a frame having been shot. Now, Filmation had to start on their first-ever live-action show — and converting 10,000 square feet of their facilities into live-action studio space was only the beginning.

RetroFan #4 is out March 20. You can get it at your local comics shop or directly through TwoMorrows.