EXCLUSIVE BACK ISSUE EXCERPT: An interview with E. Nelson Bridwell from the Rock of Eternity…

Back Issue #103 is out 2/28 and this time around mag chieftain Michael Eury has put the spotlight on comics editors, who to me are the unsung creative forces of the industry. 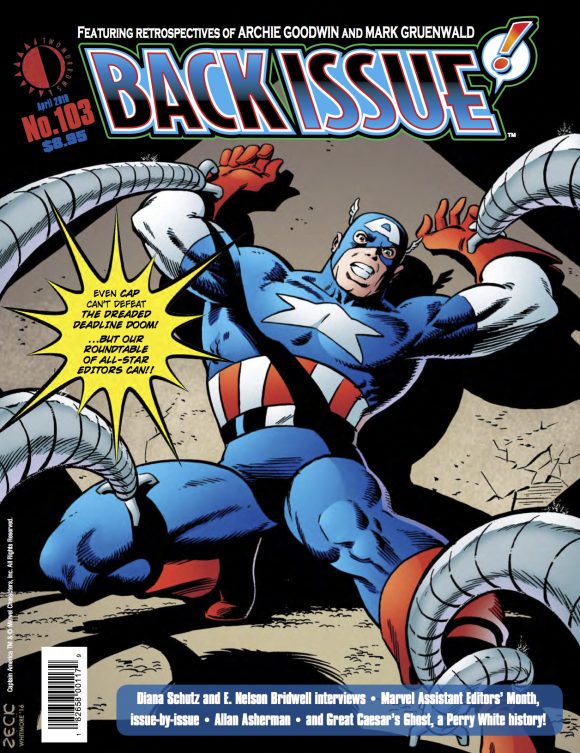 There are appreciations of Len Wein, Archie Goodwin and Mark Gruenwald; commentaries by the likes of Marv Wolfman, Jim Salicrup and Tom Brevoort; a look at Marvel’s Assistant Editors’ Month; and a number of other features. 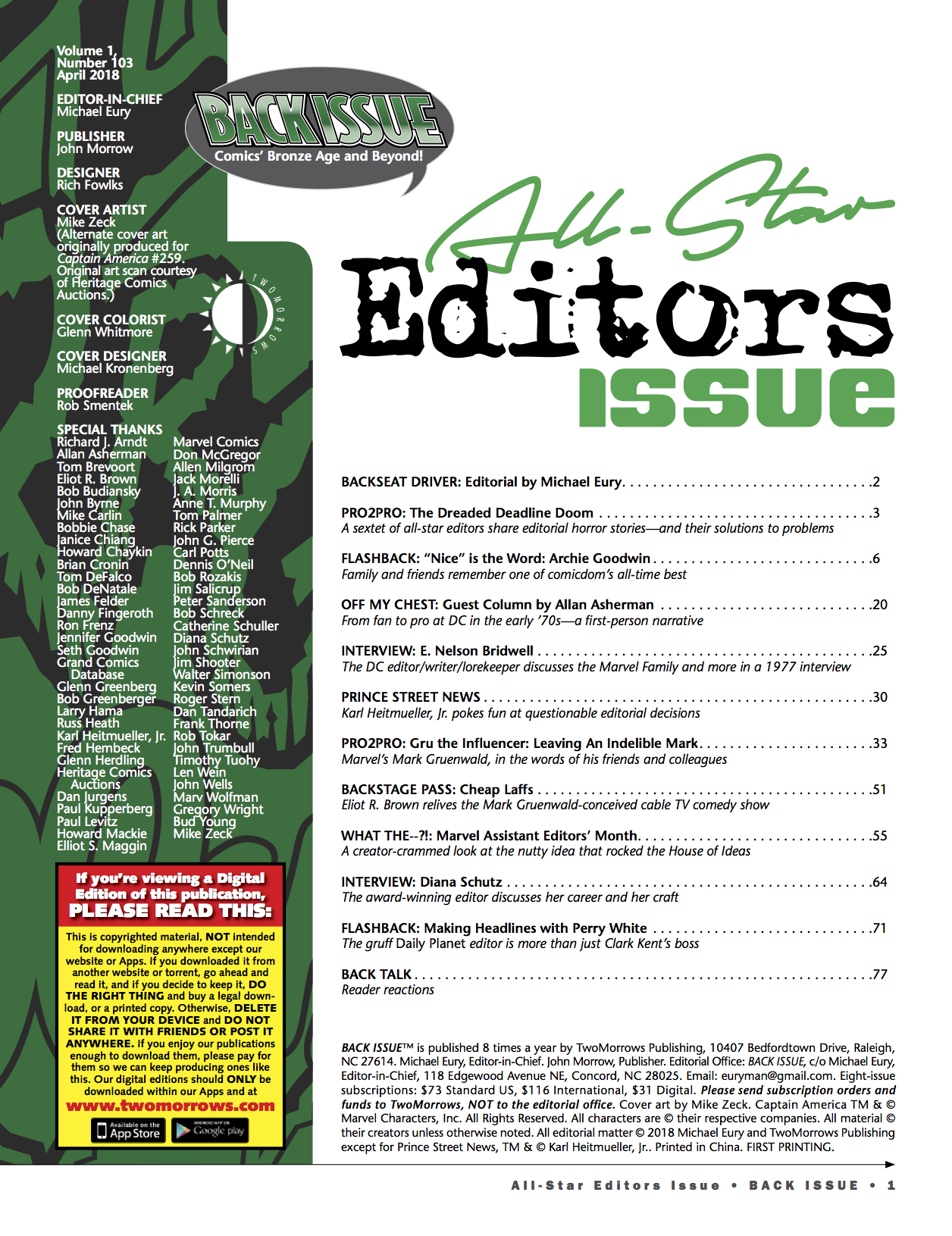 The piece that jumped out at me, though, was through-the-mail interview with E. Nelson Bridwell — from 1977. Bridwell, who died in 1987 at the age of 55, was a DC assistant editor and company stalwart in the Silver and Bronze ages. He was also an in-house historian whose selection of reprints helped educate an entire generation of fans.

The Bridwell interview, conducted by John G. Pierce, focuses largely on Shazam! — DC’s star-crossed attempt at bringing Captain Marvel back to the fore in the 1970s. Nostalgiasts tend to like the series but purists don’t — and Bridwell, who worked on the series, was candid in his views.

DC today is still trying to figure out what to do with the Big Red Cheese, whom they’ve rechristened Shazam in a white-flag surrender to Marvel Comics’ claim on the name Captain Marvel. But you gotta figure they’ve got something cooking. There’s a Shazam! movie coming, after all.

In any event, check out this look back at , er, Captain Marvel through the prism of four decades. This is only an excerpt of the interview, so I encourage you to pick up the complete issue, which you can get in shops or directly through publisher TwoMorrows starting 2/28:

Covers by C.C. Beck. Superman on Shazam! was by Nick Cardy, with Superman’s face inked by Murphy Anderson.

John G. Pierce: Is Captain Marvel your all-time favorite? If not, how does he rank among your favorites?

Pierce: When did you first learn that you would be working on Captain Marvel, and what was your immediate reaction?

Bridwell: When Julie [Schwartz] got the word he was to edit, he told me I’d be helping on it. I was delighted! Ecstatic!

Pierce: Did anyone besides (artists) Murphy Anderson, Bob Oksner, and (C.C.) Beck submit art samples for Captain Marvel when DC acquired the rights? (It would, I think, be very interesting to see how a more realistic artist such as Murphy would have handled Captain Marvel.)

Bridwell: I don’t recall any others.

Pierce: Whose stories do you prefer, [Elliot] Maggin’s or [Denny] O’Neil’s?

Pierce: What was it about Denny’s stories that made them superior to Elliot’s?

Bridwell: He tried for a light touch, [while] Elliot went for out-and-out farce. EM’s best was the Maxwell Zodiac tale [Shazam! #20], but even there, judicious editing was required. The Salad-Men and Cape-Man [#10 and 11, respectively] were written cold, with no story conferences.

[Interviewer’s note: These were the scripts that Shazam! artist C. C. Beck refused to illustrate, leading to his departure as artist from the feature. The stories were then given to Bob Oksner and Kurt Schaffenberger, respectively.]

Left and center covers by Bob Oksner. Cover on right by Kurt Schaffenberger.

Pierce: When Beck was working on Shazam!, were any changes ever made after the artwork had been completed?

Bridwell: Very few if any in the art. But sometimes he’d change the copy in a way we disliked, so we changed ’em back. This didn’t happen often, however.

Pierce: What changes, if any, did Beck make on either of the two scripts you did which he drew?

Bridwell: He simplified a couple of gimmicks and made a few minor dialogue changes. That’s all.

Pierce: Whose idea was Suspendium? 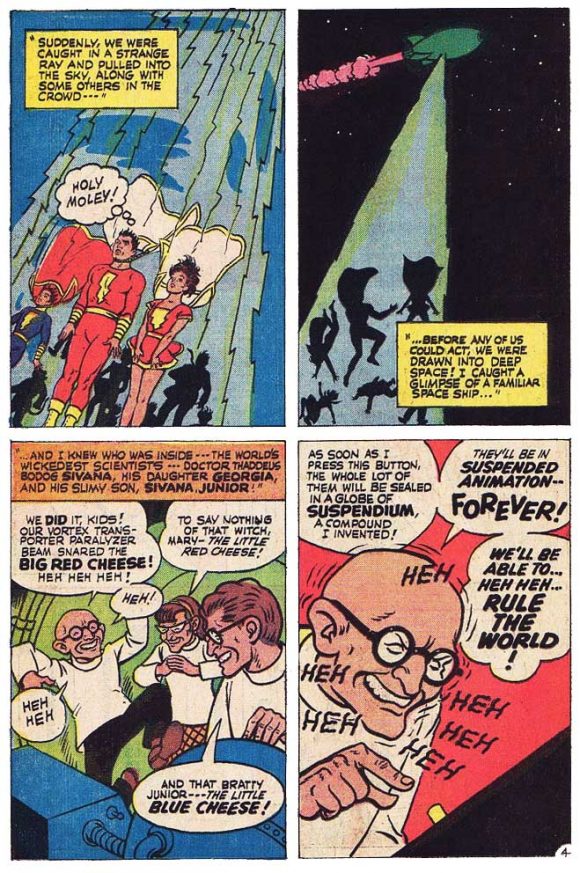 [Editor’s note: As revealed in DC’s Shazam! #1, Suspendium was an invention of Dr. Sivana’s which held the Marvel Family and friends in suspended animation for decades, to explain away the characters’ absences between the end of the Fawcett run and the DC revival.]

Pierce: When a story was written which you didn’t like, did you ever mention it to Schwartz?

Bridwell: If it was already written, then the problem, to me, was, “How do we salvage it?” Of course, I sometimes kept quiet if I had reservations but the story seemed to work. 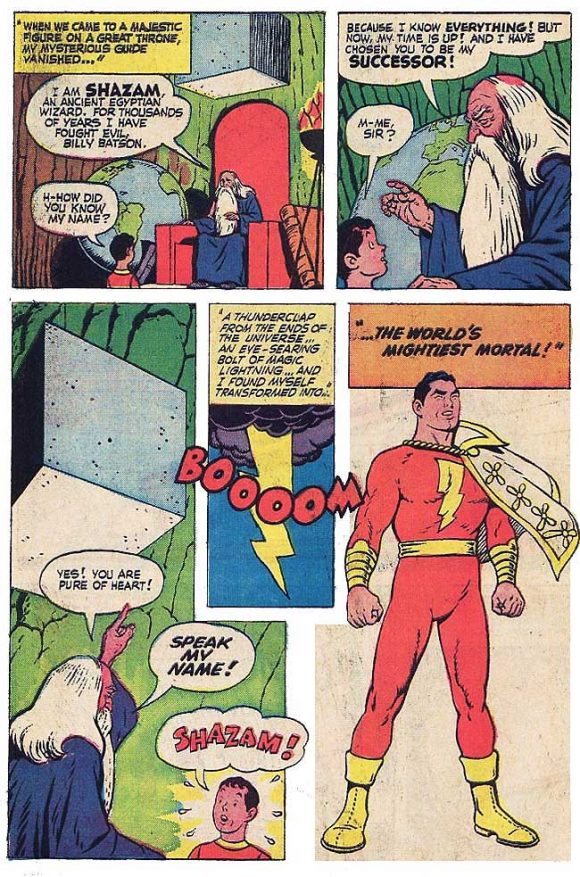 Pierce: When did you first meet C. C. Beck?

Bridwell: He stopped here on his way to a Minnesota vacation to pencil the Shazam! #1 cover—he’d mailed one already, but it seemed lost—until he had the second half-finished!

[Interviewer’s note: Elsewhere it has been reported that the cover really wasn’t lost, but rather that Schwartz feigned that it was, just to make Beck do extra work, because he allegedly despised Beck so much.]

Pierce: Do you still have contact with Beck today?

Bridwell: Haven’t heard from him for a while, but we’re still friends.

[Interviewer’s note: For a while, Beck was sending Nelson copies of his fanzine, FCA/SOB—standing for Fawcett Collectors of America/Some Opinionated Bastards [see BI #100—ed.]— but eventually stopped because, he once told me, he figured that, although “Nelson might agree with our ideas, he couldn’t say so, not in that place,” i.e., the DC offices.]

Pierce: What is your opinion of Beck?

Bridwell: Nice guy. Artistically, his passion for simplicity seems to be a bit extreme. But he’s good. 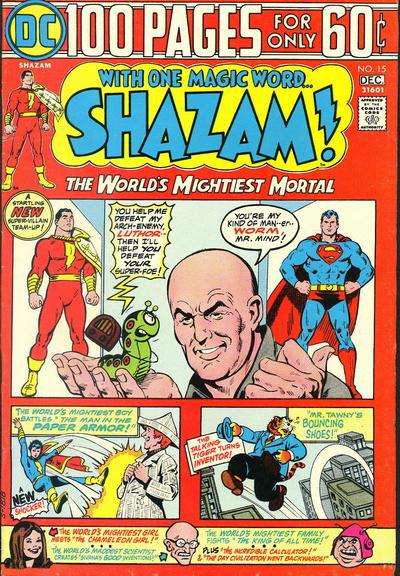 Pierce: Were you assigned to write the Mary Marvel and Captain Marvel Jr. tales, or did you request to do them?

Bridwell: Originally Maggin had the assignment, but Mary was one he couldn’t get started on. So I was asked to do it. Later, I dreamed the Paper Armor story [Shazam! #15], so when Elliot dropped Junior, I was there to take that over.

Pierce: Can you give an opinion of the work of Kurt Schaffenberger, in general, and on Shazam! in particular?

Bridwell: There’s no one else quite like him. A unique style—and one of the best for Shazam!

[Interviewer’s note: Kurt Schaffenberger once told me that Nelson’s scripts could be hard to draw, due to his insistence on dragging remote characters from the distant past into scripts. Kurt found it challenging to try to make these characters fit into a then-current setting.]

Pierce: Which of the Captain Marvel supporting characters is your favorite, and why?

Bridwell: Hard to say. I like Shazam [the wizard] and [the talking tiger Mr. Tawky] Tawny—for totally different reasons. And Beautia [Sivana], for still another reason!

Pierce: Now that reprints have virtually been eliminated from DC’s regular lineup, do you miss your task of selecting them?

Bridwell: Not particularly. I did it for so many years, it did become a bit of a job.

Pierce: What is your own all-time favorite Captain Marvel story?

Pierce: Of all the features you have written, which one is the easiest to write?

Pierce: Once the TV show syndrome has run its course, what will you do with Shazam!?

[Interviewer’s note: We know, of course, that what followed was Shazam!’s “New Look,” as explored in BI #93, with a dramatic approach under editor Jack C. Harris, who had taken over Shazam! as of Issue #32. Shazam! #34, featuring a battle against Captain Nazi, featured pseudo-realistic art by Alan Weiss and Joe Rubinstein. With the next, and final, issue, Don Newton took over the penciling chores, with Kurt Schaffenberger inking. About the use of use of Weiss, in later correspondence Nelson told me, “Weiss was a good choice for the Captain Nazi story. As I wrote it, I was wishing for an artist with the realistic approach of a (Mac) Raboy. Nazi and Junior cried for it.”] 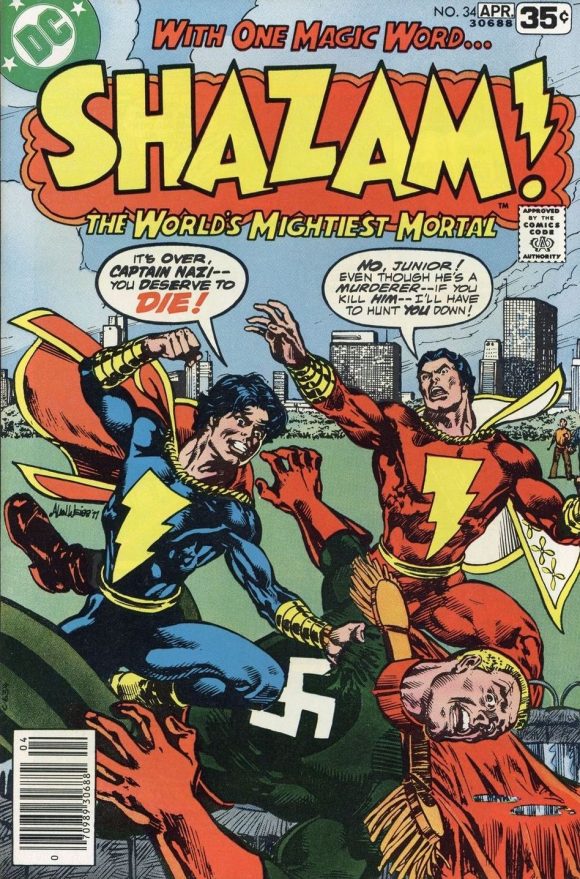 Pierce: Do you feel that the idea of a boy changing into a superhero is perhaps a bit too simplistic for today’s readers, and perhaps this is part of the reason for the failure to capture a large following?

Bridwell: No—we started off on the wrong foot. We didn’t make him heroic enough. Sales are picking up now.

Pierce: Comics are shrinking in size, increasing in price, and decreasing in circulation. Aren’t you a bit pessimistic about their future?

Bridwell: No. I think we need new ideas, new “packaging”—but we’ll get it!

Back Issue #103 will be in shops beginning 2/28. You can also get it directly through TwoMorrows. Click here.

NOTE: Most of the Shazam!, Captain Marvel Adventures and The Marvel Family cover scans are from the Grand Comics Database.