SHAZAM! 13 Things to Love About the Original CAPTAIN MARVEL

From his Bronze Age revival to today…

Shazam! is out this weekend, as you know, so we’ve been giving some love to the classic incarnations of the Big Red Cheese. Click here for a nifty 13 COVERS selection, for example.

Anyway, I’ve asked columnist Anthony Durso to dive into the world of the erstwhile Captain Marvel and come up with 13 THINGS TO LOVE about the character now called Shazam.

By the way, not that you asked, but my favorite Cap story was the two-parter by Roy Thomas, Gerry Conway, Rich Buckler and Dick Giordano in 1981’s DC Comics Presents #33 and #34. Sacrilege, I know, but the heart wants what the heart wants. 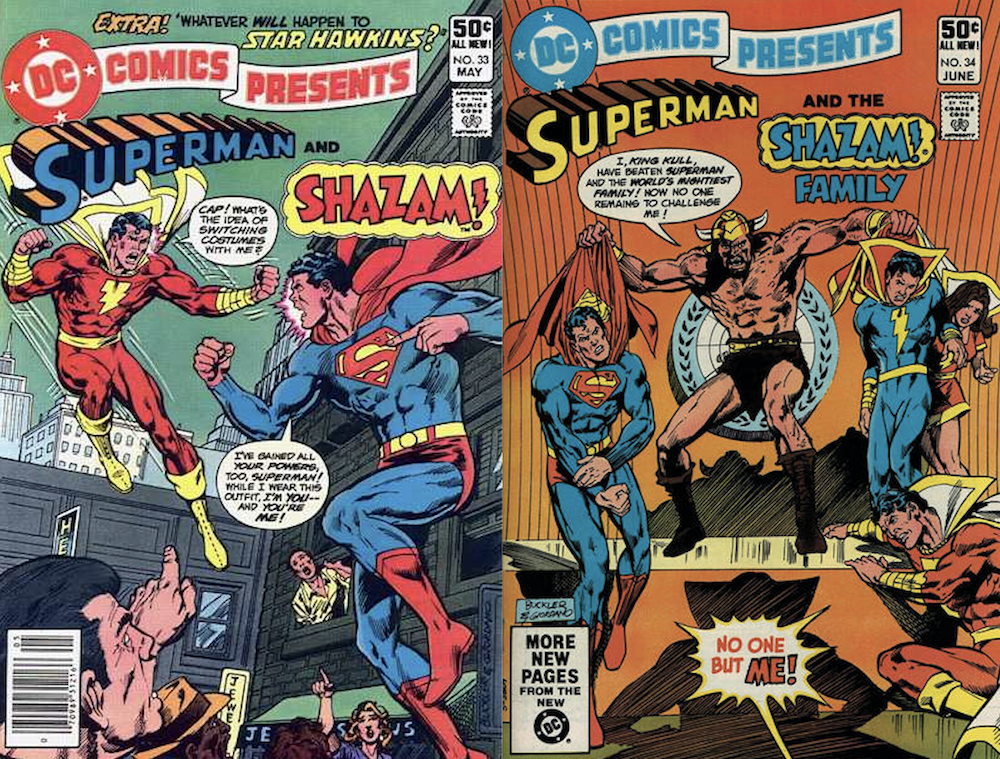 13. Mego (1974). The 8-inch Mego Shazam! action figure may have been my first encounter with the World’s Mightiest Mortal. Although I never purchased one back in the day, it seemed to be the one I’d encounter wherever I saw Megos. That image from the back of the box is burned in my brain from the countless times I saw it in department stores and toy shops. The figure itself is rather generic. Just about everything on it is wrong… boots, cape, Peter Parker-esque head. Ahhhh… Mego. 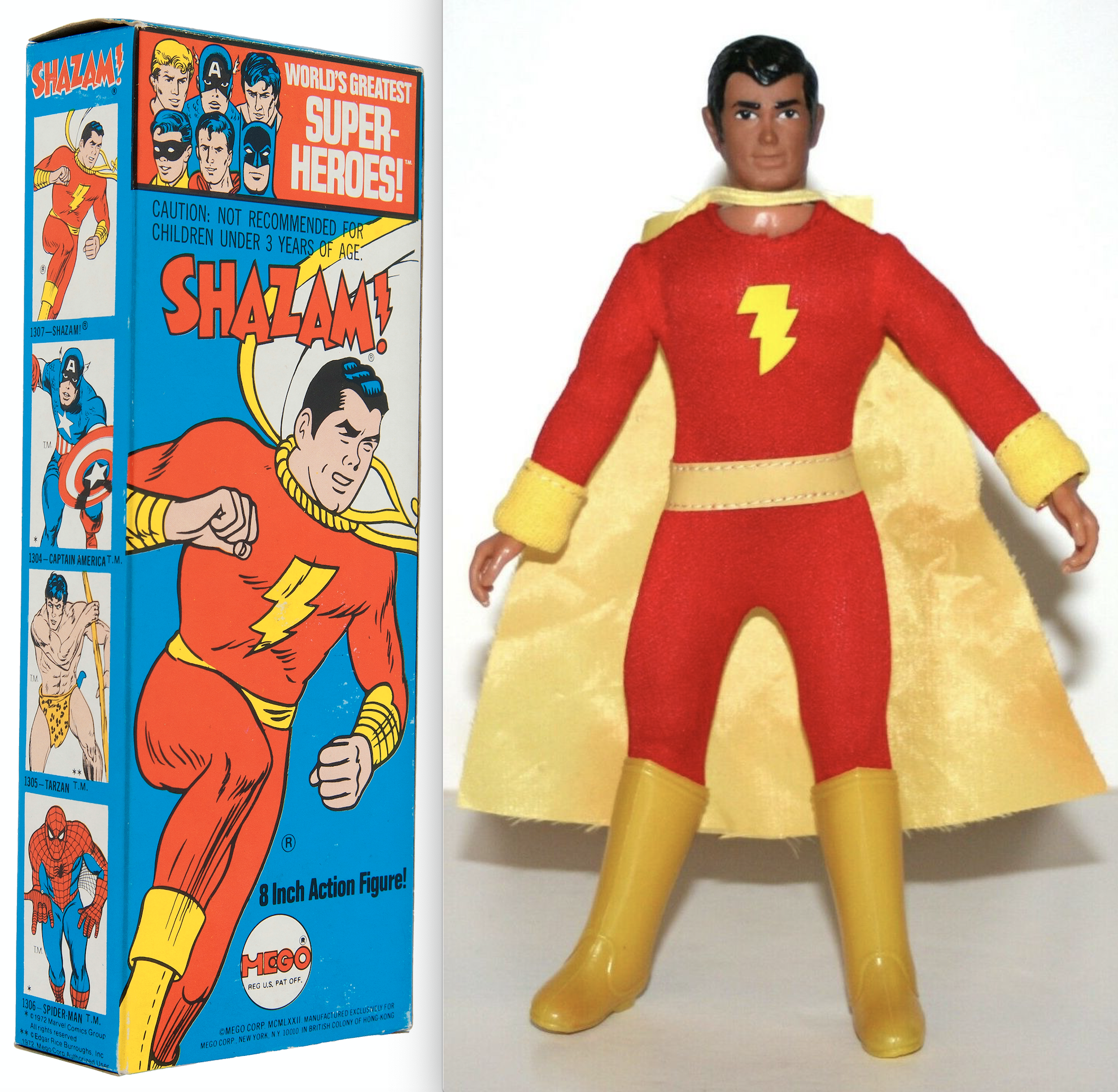 12. Pepsi Moon Glass (1976). Much like the Mego figure, the Pepsi moon glass featuring Captain Marvel is the one I always seemed to stumble across at any garage sale or flea market in the last 30 years.

11. Corgi Jr. (1979). I wasn’t much of a di- cast car kid. My brother, though, was the Matchbox king. He had tons of them that he’d take around in those little vinyl-and-plastic carrying cases. He also dabbled in the Corgi Jr. line but most of those were of the TV/movie variety like the Batmobile or Kojak’s car. Occasionally, I’d cross over into his world. The Shazam Corgi Jr. was one such occasion.

10. Don Newton’s Shazam! (1978-82). I was very late to the party. Artist Don Newton’s Shazam! was my first encounter with the Big Red Cheese in a standard comic book, having missed the initial Bronze Age revival. Newton became the penciller with Issue #35 in 1978 and upon the title’s cancelation, moved with the character to World’s Finest from Issue #253 to #282. Newton is one of the more underrated pencillers of the Bronze Age and although he’s mostly known for his lengthy stint on Batman-related features, it’s his work on Captain Marvel that really shines for me.

9. Filmation’s Shazam! Cartoon (1981). After producing their successful live-action series several years prior, Filmation went back to the well and produced a Shazam! Cartoon. (Which is what they originally wanted to do back in 1974.) This time around, Mentor was ditched and Billy Batson was joined by his sister Mary, his friend Freddy Freeman and their “Uncle” Dudley as they faced the likes of Dr. Sivana, Mr. Mind, Black Adam and more. Even Tawky Tawny was there. The official title of the show was The Kid Super Power Hour With Shazam! and it also featured cartoons of Hero High. Hero High was Filmation’s way to do Archie and the gang as super-heroes without renewing their Archie license. Holy moley!

8. View-Master (1975). View-Master released a three-reel set featuring The Return of Black Adam. They later included it as part of their Good Guys Gift Pack alongside other DC stalwarts Superman, Batman and Robin, Wonder Woman and Aquaman (i.e. the Super Friends).

7. Alex Ross’ Captain Marvel (1996). Billy Batson and his alter ego play a pivotal role in Kingdom Come by Mark Waid and Alex Ross, which is in essence a culmination of the National vs. Fawcett court case from 40 years prior. It was the first time Ross showcased his love for the original Captain Marvel, but it wouldn’t be the last. With Paul Dini, Ross released the tabloid-sized Shazam!: Power of Hope in 2000. Ross then (along with co-writer Jim Krueger and penciller Doug Braithwaite) had Captain Marvel join his version of the Justice League of America in 2005’s Justice 12-part mini-series. Two years later, Ross worked up a proposal for DC Comics titled Say My Name… Shazam! It was… turned down.

6. Thunderworld and Convergence (2015). The Multiversity: Thunderworld Adventures and Convergence: Shazam! were both released in 2015, the former in February and the latter in June. It was a one-two punch (courtesy of the teams of Grant Morrison/Cameron Stewart and Jeff Parker/Evan “Doc” Shaner, respectively) that brought the Marvel Family and their much needed brand of whimsy back to the DC Universe, albeit if only for three issues total. Still, they’re probably three of the best “modern day” Shazam! stories. 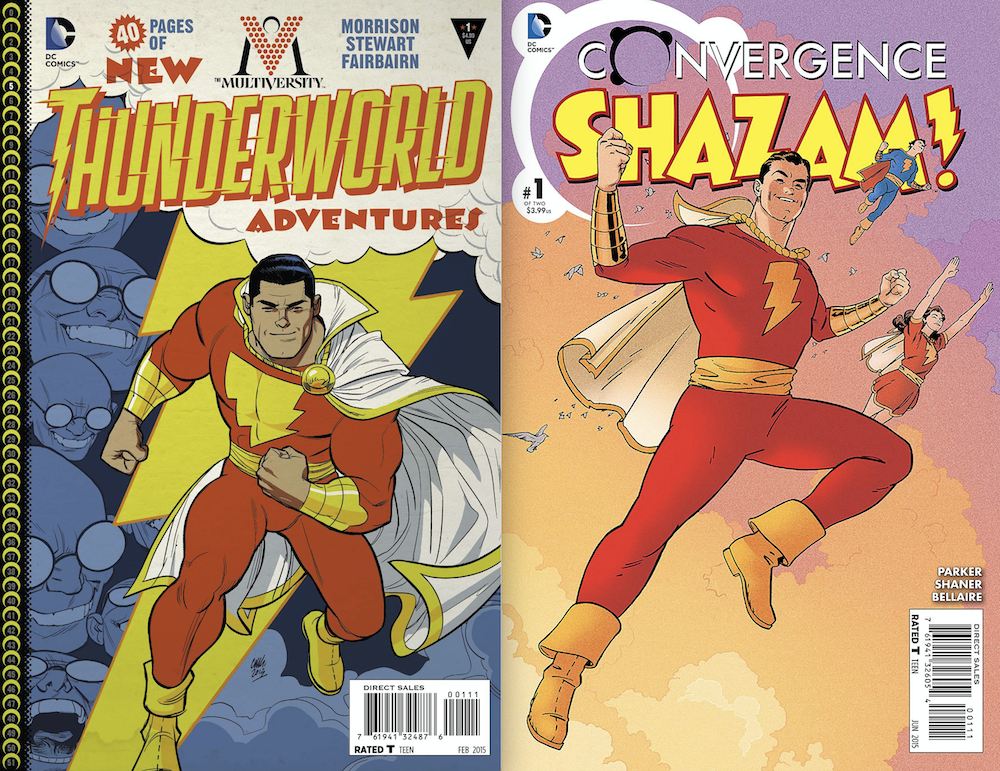 5. Superman vs. Shazam! (1978). Their battle goes back to 1951 but the Man of Steel and the World’s Mightiest Mortal finally had it out in giant-sized format in All-New Collectors’Edition #C-58. Written by Gerry Conway with art by Rich Buckler and Dick Giordano, this slugfest was the climax to teases that had been brewing for a few years. First, a Shazam lookalike named Captain Thunder fought Superman in Superman #276 (1974). Then, the JLA and JSA made a trip to Earth-S (the Marvel Family’s pre-Crisis stomping ground) in Justice League of America #135-137 (1976). Heck, Captain Marvel even met Lex Luthor in Shazam! #15 (1974). Even after the dust settled in the treasury edition it still wasn’t over. Super and Cap had memorable meetings again in issues of DC Comics Presents before Crisis on Infinite Earths changed everything. And we’d be remiss if we didn’t mention Superduperman vs Captain Marbles from Mad Magazine #4 in 1953. These two seem to bring out the worst — and best — in each other.

4. Shazam! (1974-1976). The live-action Filmation production of Shazam! was what I really first sunk my teeth into in regards to the character. Yes, I had seen him around on some merchandise but it was really the TV show that made him a household name in my, well, household. The show followed the adventures of Billy Batson (Michael Gray) and his mentor, um, Mentor (Les Tremayne) as they rolled around in a nondescript (except for the lightning bolt design plate above the front grill) Winnebago trying to right wrongs, develop understanding and seek justice for all. Which means getting involved in the day-to-day troubles of typical youth in southern California.Kinda like an Afterschool Special but on Saturday mornings.

In time of dire need, Billy would shout “Shazam!” and be transformed into Captain Marvel (originally played by Jackson Bostwick and then later by John Davey). By 1975, the show was paired with The Secrets of Isis (starring Joanna Cameron) and was branded as The Shazam/Isis Hour. The two heroes even crossed over and appeared on each other’s shows. The series was released on DVD in 2012 from Warner Archive. I got the version with Jerry Ordway cover art!

3. The Power of Shazam! (1994-99). Speaking of Ordway, for five years, he (along with Peter Krause and Mike Manley) was able to do what no one else before or since has really been able to — and that’s make the Marvel Family and the inhabitants of Fawcett City work within the context of a modern DC Universe. With just enough of a modern spin but still holding onto its roots (including the vibe of the 1941 movie serial), The Power of Shazam! was probably my favorite DC title during that era, just behind James Robinson’s Starman — which says a lot! Unfortunately, this is another one of those DC titles that should be an evergreen reprint but it’s not.

2. Shazam! Giant Comics to Color (1975). Whitman Publishing put out four tabloid-sized coloring books featuring N.P.P.’s four biggest stars… Superman, Batman, Wonder Woman and… Shazam! Yes, Captain Marvel really was the fourth big DC Comics character once upon a time, as far as merchandise was concerned. Not Aquaman, not Green Lantern, not the Flash. Shazam! was ALL over the place. This particular item holds a special place for me because I remember my grandmother buying it for me. ’Nuff said!

1. Treasury Editions (1973-75). There’s nothing better than reading old Captain Marvel and Marvel Family stories in giant-sized treasury editions. When I think of DC’s Limited Collectors’ Edition, inevitably the Shazam! issues are the first that pop in my mind. Their covers are iconic. And although there were only three issues (#C-21, #C-27 and #C-35) it seems like there were more. In fact, Captain Marvel is the third-ranking solo character (tied with Superman) that saw action in the initial LCE run. Batman and Rudolph the Red-Nosed Reindeer are tied at five each at the top. Shazam! has more issues of LCE than Aquaman, the Flash, Green Lantern, and Wonder Woman combined – because they had NONE. As old Gomer Pyle would say… “Surprise, surprise, surprise!”