PLUS: Several more new editions coming, as well, including Avengers, X-Men and MORE…

More news about what Marvel has in store on the Epic Collection front is popping up here and there.

Joining the list we ran earlier in April are three major re-releases and several additional first-timers, according to listings from Amazon and Hachette Book Group (which handles Marvel in the book market). 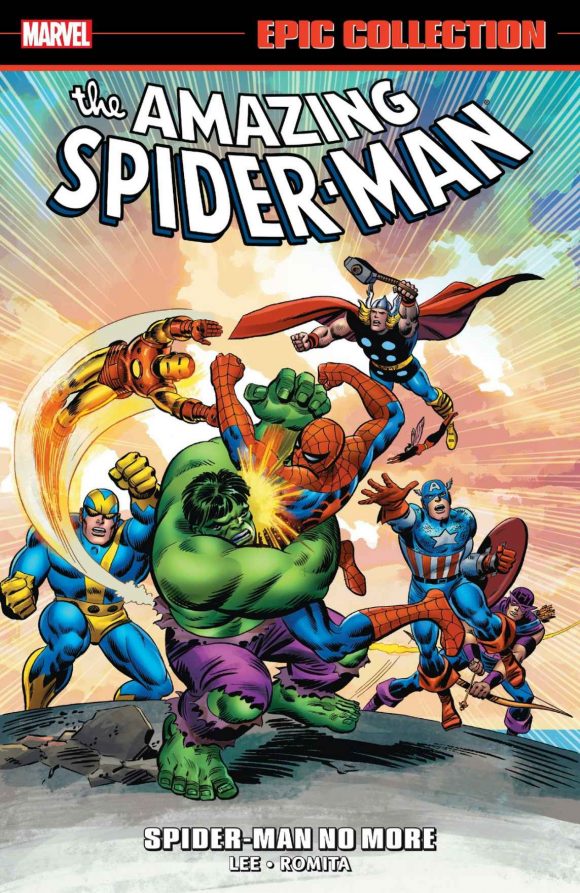 By Stan Lee and John Romita

John Romita Sr. joins Stan Lee, elevating Spidey’s adventures to new heights — beginning with a Green Goblin epic that establishes him as Spider-Man’s most dangerous enemy! And then the Rhino, a bulldozer on two legs, threatens to make Spidey an endangered species. The action keeps pumping with Spidey’s first meeting with the Avengers, the Shocker, the return of the Lizard, Kraven the Hunter, an all-new Vulture and the first appearance of the Kingpin! But the true heart of the story is young Peter Parker finding his way in the world. He gains new independence as he gets his own pad with Harry Osborn, courts Gwen Stacy — and, in comics’ most unforgettable entrance, meets Miss Mary Jane Watson! 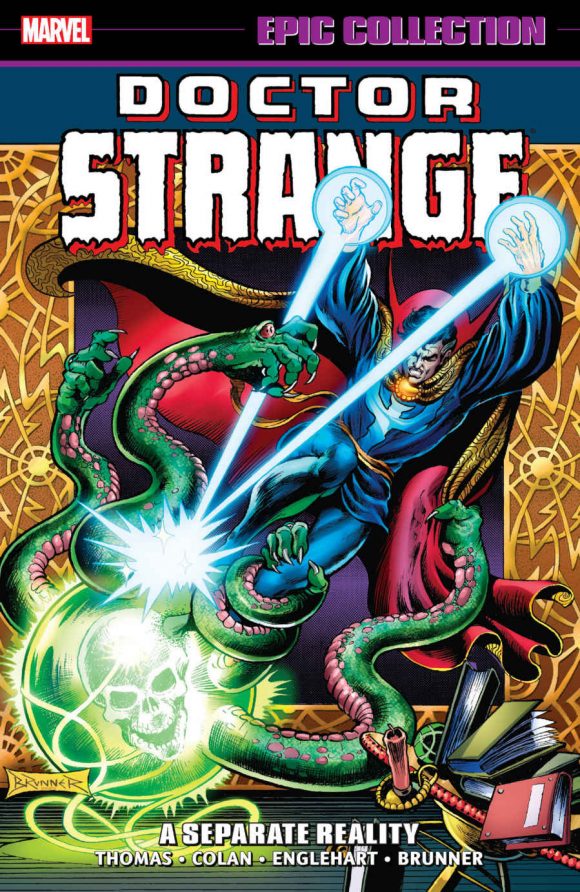 It’s Doctor Strange at his very best, brought to you by a host of top-flight creators including Roy Thomas, Gene Colan, Stan Lee and Barry Windsor-Smith! They’ll take you on a trip to the dark side of the Marvel Universe, and bring you before the Undying Ones, Baron Mordo, the cosmic threat of Eternity and the eldritch horror of Shuma-Gorath! Then, Steve Englehart and Frank Brunner break new boundaries of cosmic consciousness and other-dimensional adventure. Their all-time classic “Sise-Neg Genesis” and “Silver Dagger” sagas are strikingly personal epics featuring deliriously lush art and stories that plumb the depths of Strange’s soul! Also: Witness the death of the Ancient One, and Doctor Strange’s ascension to Sorcerer Supreme! 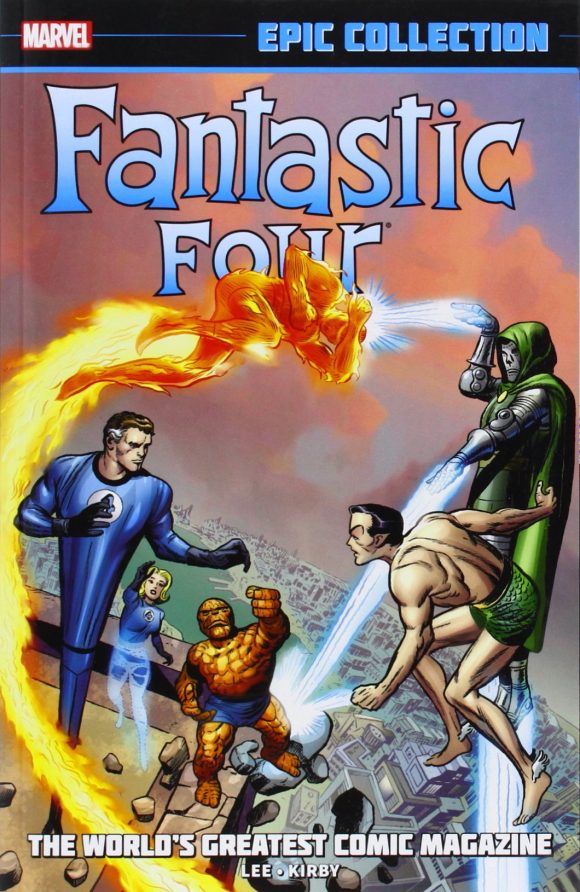 By Stan Lee and Jack Kirby

In 1961, Stan Lee and Jack Kirby lit the fuse of the greatest revolution in comic-book history — the Marvel Age of Comics — and it started right here, in the pages of FANTASTIC FOUR! With the space race on, Reed Richards, Ben Grimm, Sue Storm and Johnny Storm shoot for the stars — but after their craft is bombarded by cosmic rays, they return to Earth with the startling powers of the Fantastic Four! These weren’t just any super heroes, though — the Fantastic Four were a realistic, relatable, bickering and loveable family that couldn’t pay their rent and didn’t always love their powers. So crack open this Epic Collection and enjoy the beginning of the series that earned the name “The World’s Greatest Comic Magazine!” 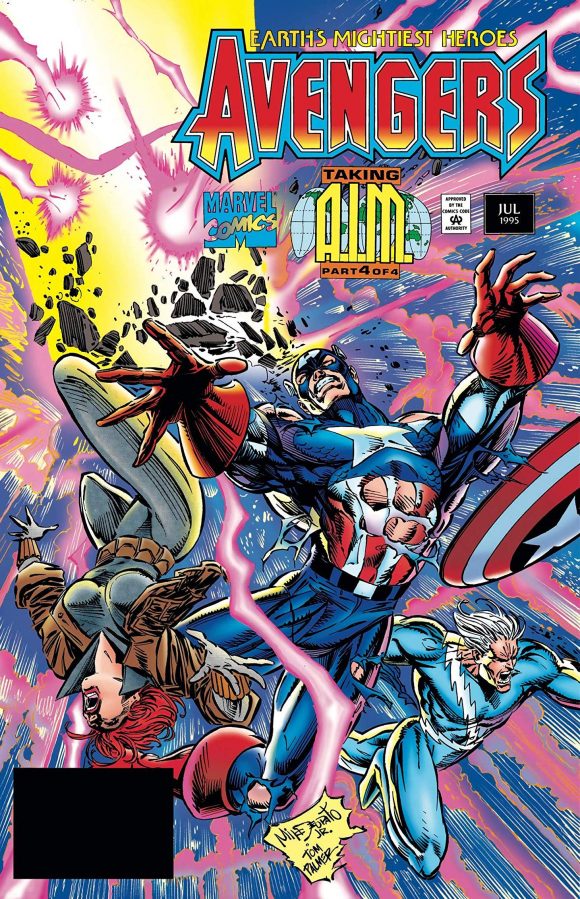 Evil reborn! Will Vision, Swordsman, Magdalene and Deathcry survive the mind-altering madness of the Mephisitoid? And on Wundagore Mountain, Crystal and Quicksilver find Pietro’s childhood nanny, Bova, on her deathbed! Can the High Evolutionary save her? Meanwhile, Giant-Man has big problems — and so does anyone else who’s used Pym Particles! And, haunted by dreams that seem like memories, everything the Vision knows about humanity is about to be challenged! Plus, there’s more to Taylor Madison, Hercules’ mortal girlfriend, than meets the eye — prepare for a Greek tragedy! And when Captain America’s bitter enemy the Red Skull resurfaces, seeking a prize beyond measure, it could spell the end of the Avengers! It’s a shocking saga featuring A.I.M., the Cosmic Cube, the Super-Adaptoid…and M.O.D.O.K.! 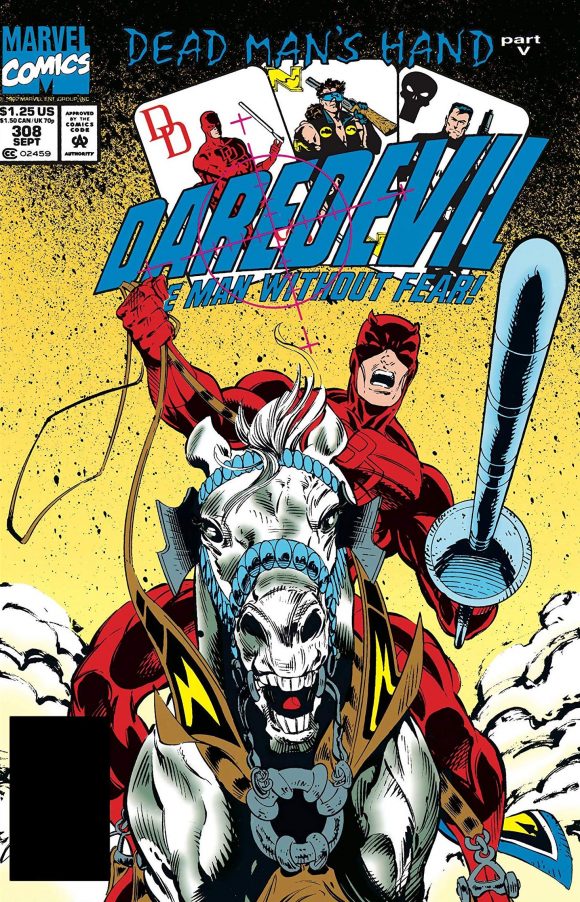 Who will claim the Kingpin’s empire? Wilson Fisk has fallen — and would-be crimelord the Owl sinks his talons into New York City! Meanwhile, the sinister Surgeon General slices her way through unsuspecting victims — and her next “patients” may be Daredevil and Spider-Man! But when Nelson & Murdock roll the dice on a big case in Las Vegas, DD finds a cabal of criminals looking to step into Fisk’s oversized shoes! With Tombstone, Hammerhead, Silvermane and Justin Hammer mingling with representatives of Hydra, the Secret Empire, the Hand and more, chaos is in the cards — and when violent vigilantes Nomad and the Punisher arrive in Sin City, all bets are off! Plus, can Daredevil defeat his own twisted doppelganger? 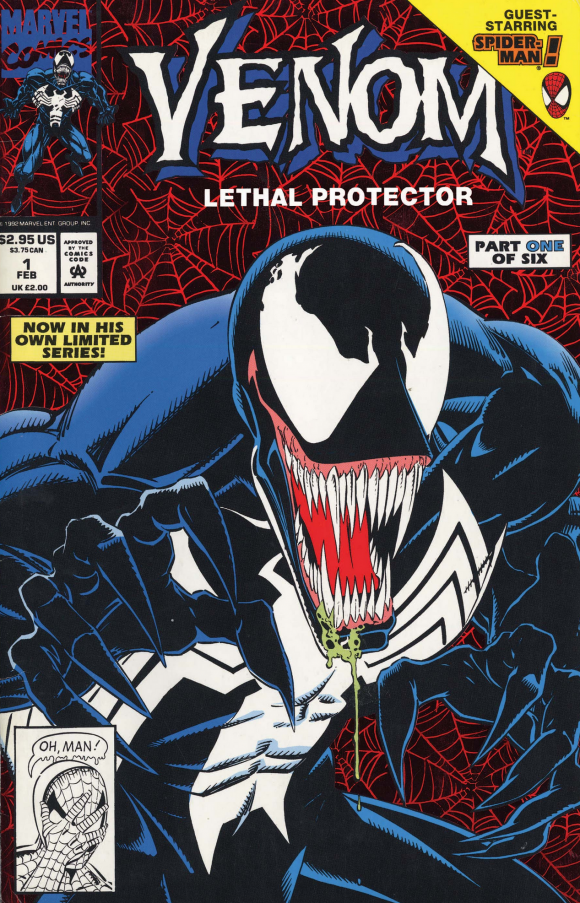 By David Michelinie, Mark Bagley, Ron Lim and others

From villain to vigilante! Follow Eddie Brock’s journey as he evolves from Spider-Man’s deadly foe into a twisted new hero — starting when Spidey recruits Venom to battle his symbiote’s psychopathic offspring, Carnage! But Eddie’s still out for blood, and he doesn’t care who gets in the way — even Ghost Rider! Can anyone convince him to drop his grudge against Spider-Man? Venom forges a fresh future in San Francisco, targeting those who prey on the weak! But he’ll soon find himself judged by the Jury — and swarmed by strange new symbiotes! Plus, Venom shares a nightmarish team-up with Wolverine! 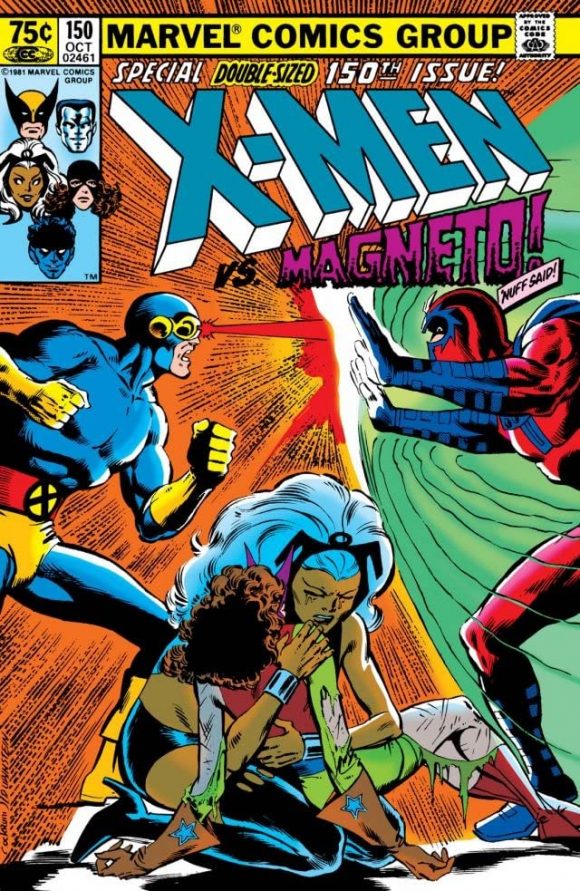 Chris Claremont reunites with Dave Cockrum for another run of X-Men classics! They put the all-new, all-different mutants they made famous into an action-packed pressure cooker through Arcade, Dr. Doom and Garokk that blows its top with the return of Magneto in an anniversary extravaganza! Next, it’s the immortal “Kitty’s Fairy Tale,” a storybook fantasy that introduced Kitty’s loyal pet dragon, the lovable Lockheed! Brent Anderson draws a double-sized annual teaming the X-Men with the FF against the barbarian Arkon! And, just because we love ya, we’re including Avengers Annual #10, featuring the iconic first appearance of Rogue! Also featuring guest-appearances by Spider-Woman and Dazzler, the fan-favorite Savage Land saga from Marvel Fanfare and rare X-Men stories from Bizarre Adventures! 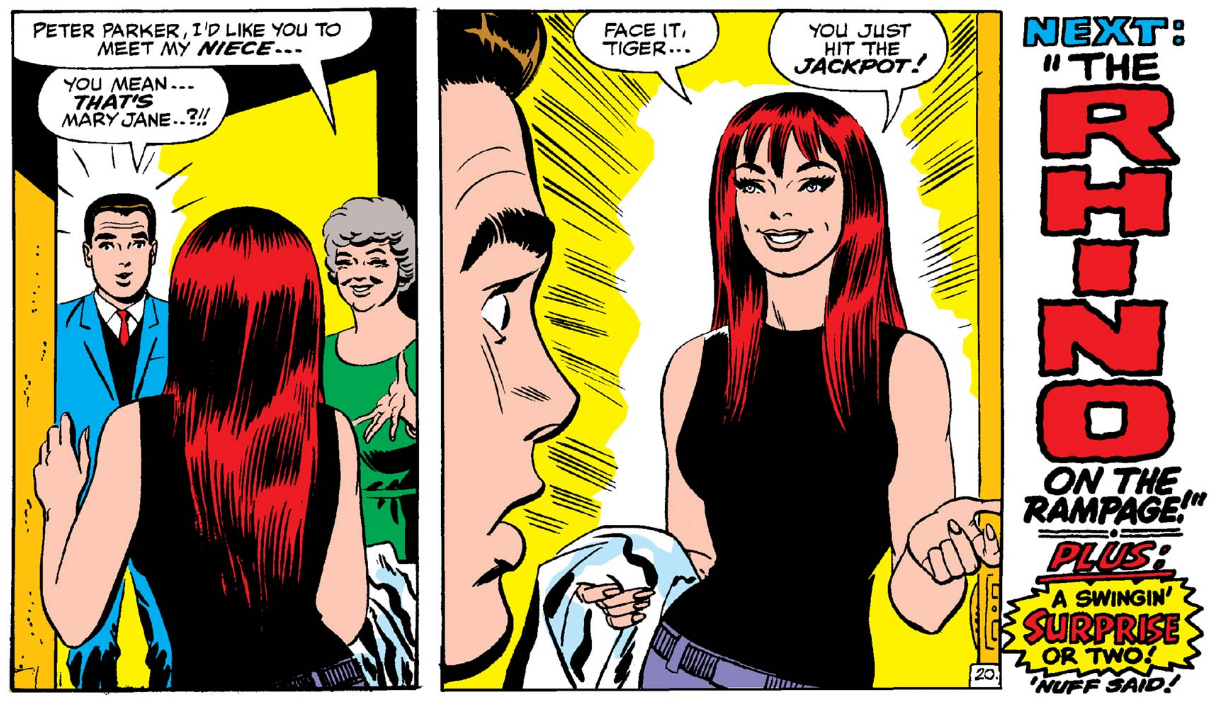 — I recently read the Spider-Man No More Epic Collection. If it’s been a long time since you’ve read these classic stories, I can tell you they most certainly hold up. But you really don’t need me to tell you that; these are among the best Spidey stories ever.

— Not all the descriptions included covers or creators, so I chose representative ones in those cases.

— Are these comprehensive lists? No. Info trickles out from various sources over a period of time. As that info begins to solidify, we highlight the books that we think will be of particular interest to 13th Dimension readers.