On the Eighth Day of his holiday residency with 13th Dimension, Si Spurrier brings the Kappa, one of his 13 greatest myths over 13 Days of Myth-mas, all leading up to the release of his series Cry Havoc from Image in January.

And here we are on the Eighth Day of Si Spurrier’s 13 Days of Myth-mas, in which he’s taken us across the world and through the centuries, poring over various myths and folktales. Today, he takes us to Japan, where we meet the odd and mischievous Kappa… 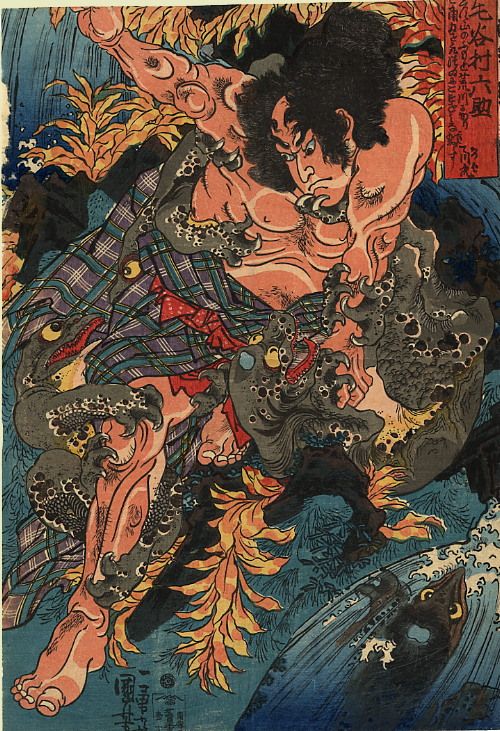 As you might’ve gathered from our new pal the Penanggalan, from Day 2, Asia really does have some of the most spectacularly crazy monsters out. Given the richness of its culture and its frequent historical periods of inward-facing isolation, it’s no biggie that Japan has more than its fair share of bonkers bogeymen. One of my favourites, the creepy crow/man called Karasu Tengu, features prominently in Cry Havoc, so I won’t go into that here (except to say that if you ever see a Japanese mask in a museum with a grotesquely elongated cock instead of a nose, Google it).

But the Kappa – “river child” – is every bit as bizarre. And is quite possibly the most rubbish monster ever.

It’s a water spirit – lives in ponds, can’t abide ginger, has a deep and neurotic sense of decorum and good manners, y’know, the usual – and like aquatic gribblies the world over it’s therefore mischievous, unknowable, mercurial. Sometimes dangerous, sometimes helpful; always nutfuck insane. See, the Kappa takes the form of a sort of lizardy turtley crocodiley kind of thing, and you’d be forgiven for assuming this is about as clear-cut a case of euhemerism as it’s possible to get, given the presence of the aptly named Japanese Giant Salamander in the same waters.

Except for the bit about the head-bowl. Oh, and the cucumbers. I’ll come back to that. 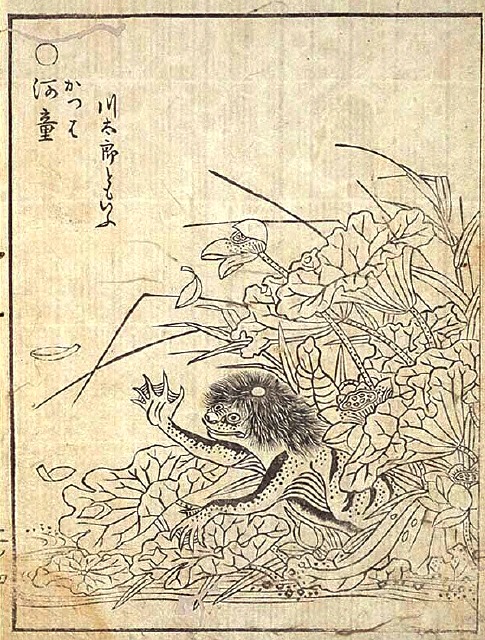 The Kappa has a perfectly formed depression in the middle of its head. As long as this little hollow contains a bit of water the kappa’s basically indestructible: wandering around on land, talking Japanese with a perfect (albeit slightly posh) accent, tricking people, all that jazz. It even likes to wear a fruity little cap to keep the headbowl safe.

But if the water dries up? Ruh-roh! Mr. Dent-skulled Newtyman is in trouble, oh yes, and will offer all sorts of riches, services and similar folkloric mainstays to anyone who’ll help it get back to the pond.

I mentioned earlier the kappa is well known for having a well-developed set of good manners, right? It insists on using the correct honorifics and gets pissy with anyone who skips on the social niceties? Right, well, here’s the great part. In Japan, as I’m sure most of you know, one demonstrates respect and politeness during greetings and partings by giving a small bow. As in: the sort of bow which causes one to slightly dip one’s head. As in: the sort of bow which might, if one happened to have a shallow bowl instead of a forehead, cause it to empty of any liquids stored therein. 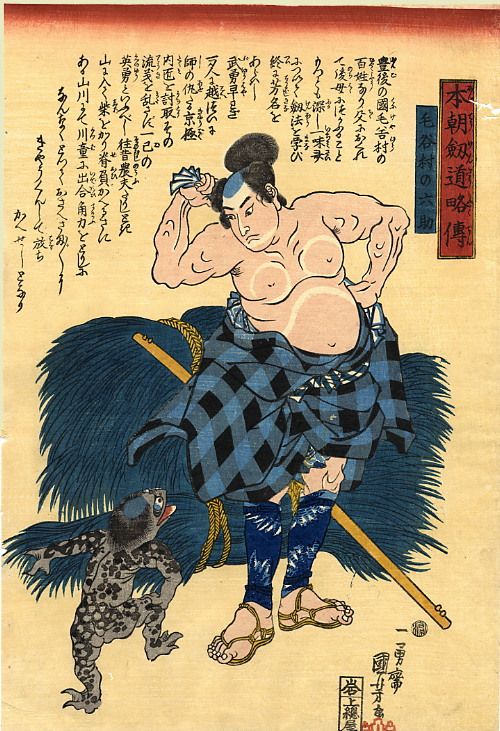 Let me put it differently: The Kappa is a terrifying water-monster which you defeat by saying hello.

Oh, it also has a weird lust for cucumbers, which doesn’t sound very terrifying-water-monster-ish to me, but at least explains why those inoffensive little sushi rolls with cucumber inside are called kappa maki. I FACT YOU IN THE FACE.

NEXT: OTTAR THE SIMPLE.