Hey, they can’t all be classics.

This year? It’s all about Vincent Price, Roger Corman and Edgar Allan Poe: Across successive weekends, we’ve been featuring a different ’60s horror film and its Dell version. For The Raven, click here. For Masque of the Red Death, click here. 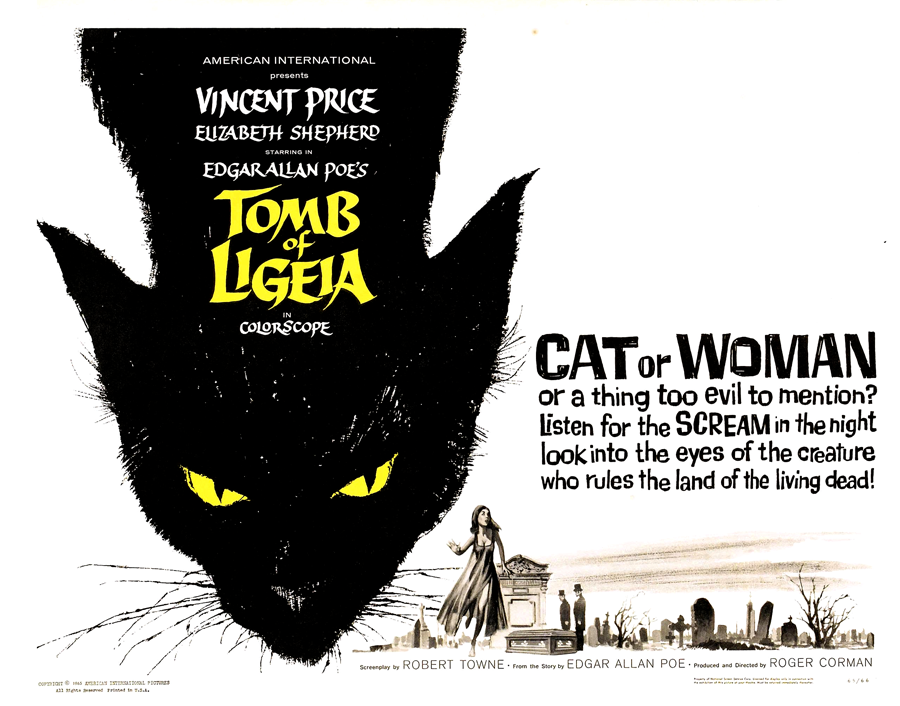 1964’s The Tomb of Ligeia, Roger Corman’s eighth and last of his Edgar Allan Poe adaptations, stars Vincent Price (of course) as Verden Fell, a widower who is deeply troubled by his first wife’s passing. He’s mourning the loss, of course, but he’s also worried for his wife’s soul: His dear departed was an atheist, who had no compunctions about making statements about God that, at the time, were considered blasphemous. During the burial, a black cat leaps onto her coffin, resulting in Ligeia’s eyes popping open. Fell announces, “It was a reflex, that’s all,” but we all sense he doesn’t really believe his own words.

Fell chooses to shun the wider world, preferring to stay inside the walls of his vast estate. A mysterious sensitivity to light forces him to wear dark glasses, even indoors, but that doesn’t stop him from marrying a young woman named Rowena (Elizabeth Shepherd), whom he meets when her horse throws her, dumping her onto Fell’s wife’s grave. It’s Poe’s version of a Meet Cute!

Rowena takes up residence at Fell’s castle, but all is not well: Her new husband is completely haunted by his dead wife’s memory, as the abbey itself seems to be. Fell undergoes a series of strange visions, and a mysterious black cat wanders the grounds, always in the wrong place at the wrong time—is it Ligeia, now in feline form? That’s seems crazy, yet…

Eventually, Fell decides to sell the abbey, and enlists Elizabeth’s former beau, Christopher Gough (John Westbrook), to help. Gough suspects something is deeply wrong, and has Ligeia’s coffin exhumed, only to find a wax dummy in place of the corpse. All of this strangeness starts to have an effect on Elizabeth, who sometimes sees Ligeia in the mirror staring back at her.

She discovers a secret passageway, and in a hidden room she finds Verden and his wife’s corpse. Verden doesn’t seem to fully understand Ligeia is dead, and then he confuses his new wife for his old one, eventually trying to strangle her at the height of his madness. We see Elizabeth transform into Ligeia, who mocks her husband with laughter. Fell, desperate to be free of Ligeia, sets the abbey on fire. Gough rescues Elizabeth, while Fell dies in his crumbling castle, as he tries, in vain, to kill the black cat he now is convinced is his dead wife.

The Tomb of Ligeia (sometimes known simply as Tomb of Ligeia) is Corman’s most “realistic” of his Poe adaptations, if for no other reason than some scenes were shot outdoors, in natural light. There’s no magic or wizards to be found; rather, it’s an internal story about one man’s madness and how it envelops those unlucky enough to be in his orbit. Corman was uncertain about casting Price, because he felt the actor was just too old for the part, and I can see what he was getting at here. It doesn’t seem plausible that the comely, intelligent Elizabeth would be so entranced by this creepy old guy who wears shades indoors and can’t stop talking about his old wife.

Even at a scant 81 minutes, Tomb of Ligeia begins to wear out its welcome because it’s mostly just talk talk talk. The scariest scene is when Ligeia, supposedly dead, seems to come alive inside her own coffin, and that’s in the first five minutes. Still, the big action finale is well staged, with Ligeia laughing at her husband, even as he strangles the life out of her, a particularly creepy touch. As the flames grow higher, we have a nice (if hardly subtle) visualization that Verden is in Hell, and the worst part is he’s probably doing it all to himself.

As we’ve established in previous Reel Retro Cinema columns, Dell Comics had a hard time with its horror movie adaptations. They really couldn’t put across anything but the mildest scary moments in their books, and Tomb of Ligeia is a movie with a scant few of them to begin with. Drawn by John Tartaglione and Vince Colletta, this version doesn’t even have the close-up of Ligeia in her coffin, preferring to have a character telling us it’s happening. That leaves the black cat to carry the load, scares-wise. Maybe in 1964 a black cat leaping into the frame could still frighten comics readers, but it registers a big zero now. In a change of pace, this book does not feature a photo cover. 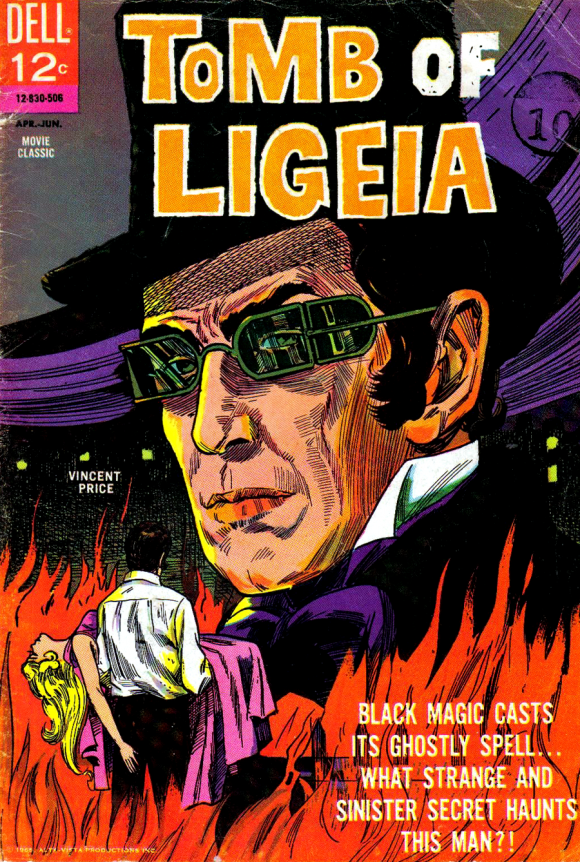 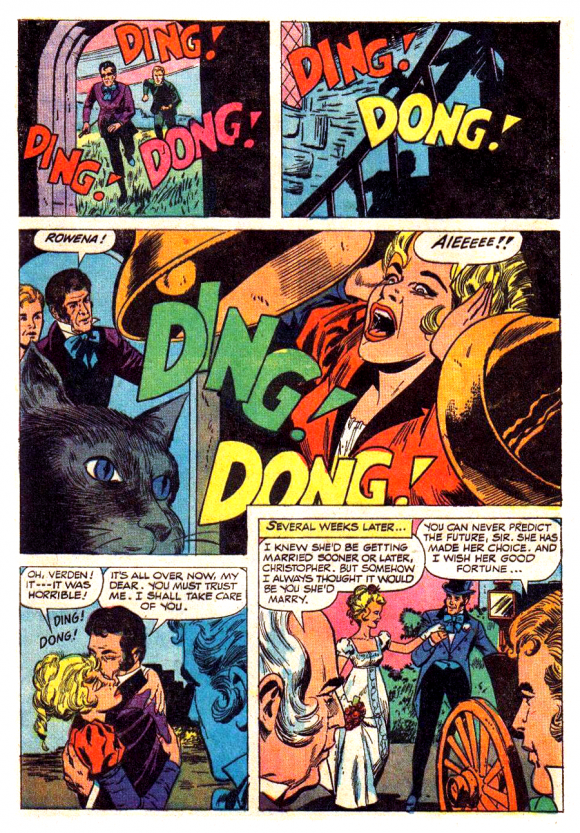 The Tomb of Ligeia was financially disappointing, something Corman chalks up to the film being eighth in the series. Audiences were just plain tired of florid dialogue, dark clouds, and shadowy castles. Corman, always sensing where the next big trend was coming from, would quickly move on to biker pictures aimed at the nascent counterculture.

Vincent Price would turn more toward comedy in the mid-to-late 1960s, appearing in films like Dr. Goldfoot and the Girl Bombs and on TV as Egghead on Batman. He continued appearing in horror films, including some genuine classics like The Conqueror Worm and The Abominable Dr. Phibes, which took advantage of looser content standards. He grew to become a horror film icon, ending his participation in the genre with Tim Burton’s Edward Scissorhands, a perfect coda to a legendary career.

Would kids like The Tomb of Ligeia? Honestly, probably not. It’s just way too talky and just doesn’t have much visual spark that many of Corman’s other films in this series had. But it’s not without its charms, and Price does a good job portraying a man slowly descending into madness, a subject Edgar Allan Poe knew all too well.