The Gruesome Glory of MASQUE OF THE RED DEATH

First up was The Raven (click here). This time? It’s THE MASQUE OF THE RED DEATH: 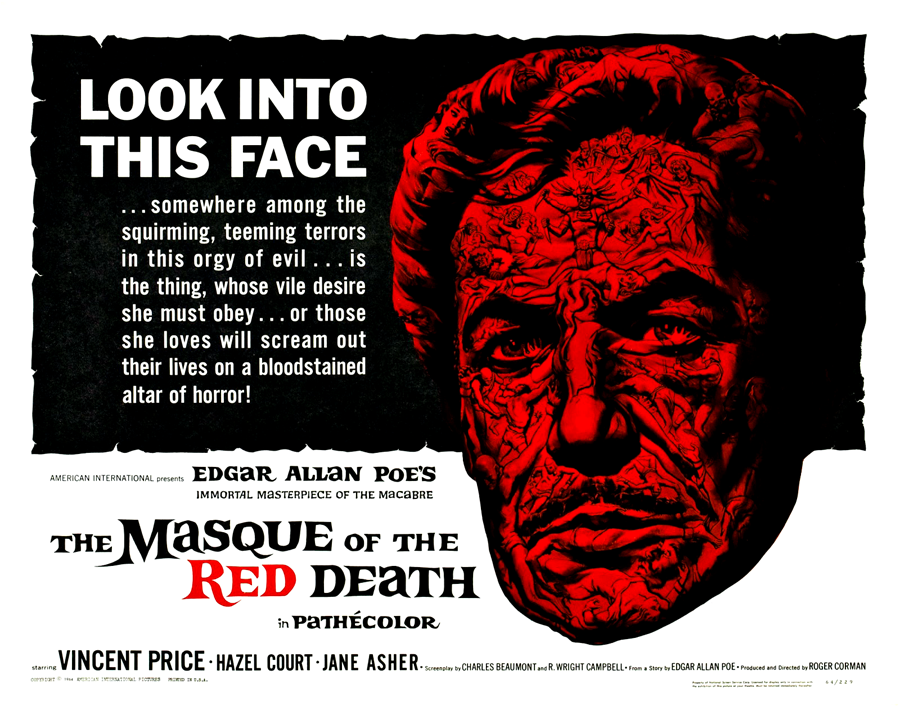 Vincent Price is at his evil-mustache-twirling best in 1964’s The Masque of the Red Death, playing a Satanist named Prince Prospero who rules over his kingdom with wanton cruelty. He lives in A posh castle on a hill that also serves as a bulwark against the “Red Death” that is sweeping across the land, killing scores of peasants.

Prospero sentences two peasants, Gino and Ludovico, to death, for confronting him about his indifference to the people. A young, beautiful woman named Francesca (Jane Asher) begs Prospero to spare their lives—one of them being her father, the other her beloved. Prospero takes one look at Francesca and offers her a Sophie’s Choice—he will spare one of them, and she must decide who dies. This sick display of power is interrupted when Prospero sees one of the villagers is infected with the plague. He orders the village burned to the ground, taking off with Francesca and both men.

Any relief Francesca might have felt from escaping the plague quickly evaporates as she learns she is not welcome in Prospero’s castle. Prospero’s consort Juliana (Hazel Court, who appeared with Price in The Raven) is jealous of the attention Prospero gives Francesca, and lets her know. Francesca also sees that her father and lover have been spared only to be used as entertainment for Prospero and his bloated, immoral hangers-on, all of whom spend their days and nights partying into oblivion while everyone else outside either starves to death or dies of the plague.

Prospero tries to seduce Francesca, but she remains steadfast. Prospero says he finds the world so ugly and sick that he is convinced there is no God, so why not throw in with Satan? Juliana, for her part, is eager to be initiated into the Satanic cult of which Prospero is a member, and eventually helps Francesca free Gino and Ludovico so they can try and escape. The two men are recaptured, however, and Ludovico tries to kill Prospero. He fails and is killed instead, and then Prospero casts Gino out, where Gino encounters a strange, red-cloaked figure who lurks in the woods with a deck of tarot cards.

Juliana eventually undergoes a ceremony where she becomes a bride of Satan, and the Red Death continues to stalk the land. Scores of villagers arrive at Prospero’s castle, begging for safety, but he turns them away, going so far as to order his men to fire arrows at them. Inside, the debauchery gets even worse. One of Prospero’s partygoers is dressed in an ape costume and dangled from a chandelier, where he is then set on fire. He screams in agony until he dies in front of the crowd, and Prospero’s only reaction is to thank the dwarf named Hop-Toad (a character imported by the screenwriters from another Poe tale) for arranging the night’s entertainment.

Prospero has ordered no one wear red at the grand masked ball he arranges a few nights later. At the party, he sees a mysterious, hooded figure dressed entirely in that color—bad form! Beneath the hood Prospero sees…himself, splattered in blood. The figure tells Prospero that “each man creates his own Hell” — and what he sees staring back at him is the living embodiment of Prospero’s particular brand of spiritual comeuppance. As the Red Death infects the merrymakers, the hooded being corners Prospero in the Black Room, the sacred space he used for the Satanic ceremonies, and strikes him down.

The film then ends how it began—with the Red Death once again playing with its tarot cards. It is met by an assortment of similarly monochromatically colored beings, each of them representing different forms of misery and death—White (Tuberculosis), Yellow (Yellow Fever), Gold (Leprosy), Orange (Trump), Blue (Cholera), Violet (Porphyria), and Black (Bubonic). They talk woefully of how many people they each claimed that night, and the Red Death mentions the six souls he spared—Francesca, Gino, Hop-Toad, and a few other innocents. They then march in a line, off into the mist.

I find The Masque of the Red Death to be the high-water mark of Roger Corman’s Poe adaptations, because it is the most grim and gutsy of the lot. While many of the other adaptations are leavened with humor or a sort of Shakespearean high-minded fooferaw, Masque does its best to convey the utter misery and degradation that was the stock and trade of most people’s lives during this time.

As a performer, Vincent Price was unceasingly, almost effortlessly charming, and he couldn’t help infuse most of his bad guy roles with some level of likability (Egghead, anyone?). But, here, Prospero is just a monster, using the innocent, wide-eyed Francesca as a plaything, even though he has Juliana, who is all in on the Satan bit. That’s too easy for Prospero—he wants to foul an innocent, mostly just for kicks.

Corman also pulls out some great visual tricks, like Juliana’s hallucination during the Satanic ritual. And the Red Death — cloaked in a super-saturated, all-red robe and hood — pops off the screen, cutting through the frame like the disease itself does to the population. There’s a limit, of course, to just how much debauchery Corman could show in 1964, so the partying we see on display looks barely more decadent than a middle-school dance party, but there’s an almost less-is-more subtlety that makes it work. If the film were made now, the film would be a hard R, leaving nothing to the imagination.

The Masque of the Red Death, ironically enough, was not as a big a hit as some of the other Poe-Corman movies. Producer Sam Arkoff said the film was “too arty farty” (all class, that guy), a charge that Corman didn’t really deny. Still, he called the movie one of his favorites, a sentiment I agree with wholeheartedly. The Masque of the Red Death has a real decadent, nasty streak in it, perfectly in tune with Poe’s story, making it a terrific adaptation. One wonders, then, what the editors at Dell Comics thought when they were faced with producing a Masque of the Red Death comic as part of their Movie Classic line. After a decent-enough photo cover, it takes all of one and a half pages to see how bloodless (literally) this version will be, when an old woman infected by the Red Death shows no outward sign of being sick. Heck, the scene’s not even taking place at night, like in the movie! 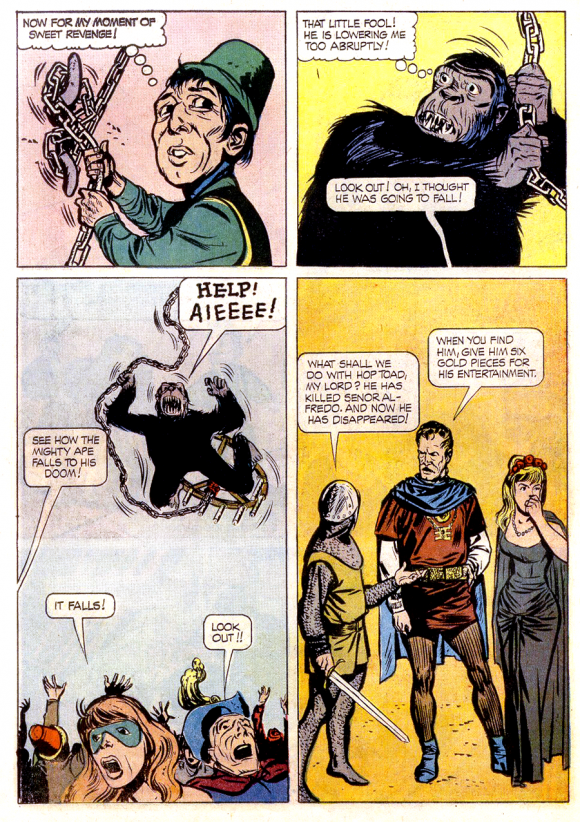 I mentioned in Part 1 of this Corman/Price/Poe series that The Raven is a great Halloween movie for the whole family. The Masque of the Red Death, while nothing compared to the Grand Guignol that modern horror audiences are met with nowadays, still has a bit of a kick, so it’s better for slightly more mature viewers. And Satanists.

NEXT: Tomb of Ligeia.