DIRECT COMMENTS: The world of Batman — and so much more…

“I was responsible for the initial concept drawing and name of the Joker, the playing card, and that first sketch which has been reproduced everywhere. The rest was really a collaboration.”

— Jerry Robinson, from Direct Currents: Comic Creators In Their Own Words

Jerry Robinson (Jan. 1, 1922-Dec. 7, 2011) was a comic book industry triple threat: an artist, writer and businessman who stumbled into the field through a chance meeting while on vacation in the Poconos Mountains.

Jerry recalled, “I wore a painter’s jacket (as a warm-up jacket while playing tennis), which was a fad in colleges in those days, but the kids in my high school were imitating it because we lived near Princeton University… (and mine) had cartoons all over it I had drawn. Someone tapped me on the shoulder and asked who had done the drawings, and I confessed I had. He introduced himself and it was Bob Kane. I don’t know why he was at the tennis court because he didn’t play tennis. He asked me if I had heard of Batman, and much to his chagrin, I hadn’t. It had just debuted earlier that summer and there were only a couple of issues of Detective Comics out.” 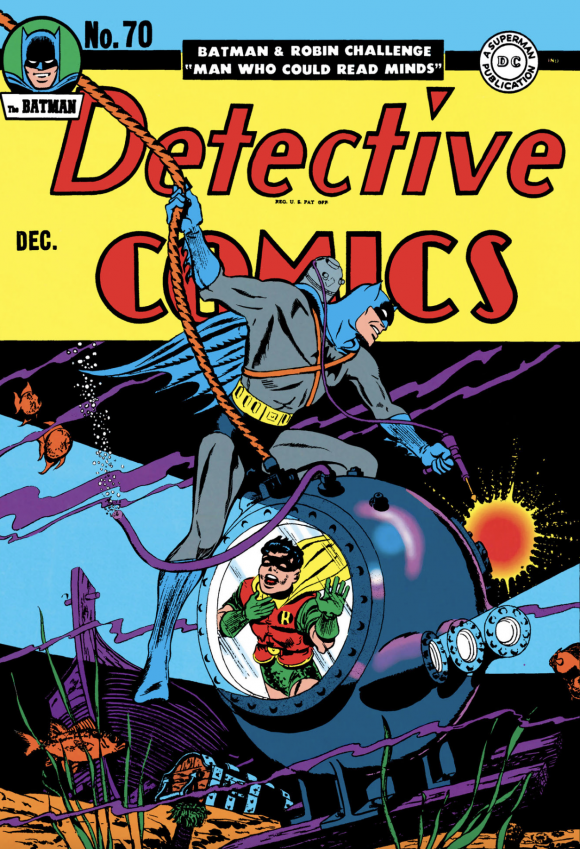 Kane hired Jerry to assist him on the new Batman strip, where he worked beside writer Bill Finger. He was eventually hired to work on Batman and other strips directly for DC Comics, teaming up with artist Mort Meskin on Vigilante, Johnny Quick and other strips. He would later turn his talents to running a newspaper syndicate, writing books on the history of newspaper comic strips, writing (and drawing) strips, editorial cartooning, book illustration and even manga.

Here then, MY 13 FAVORITE JERRY ROBINSON CREATIONS, revealed largely in Jerry’s own words:

Robin, the Boy Wonder (DC, 1940). Debuting in Detective Comics #38 (April 1940), young sidekick Dick Grayson was introduced as a humanizing element for the originally grim and gritty dark night avenger. As Jerry recalled in Direct Currents: Comic Creators In Their Own Words, “My most notable contributions to the Batman mythos were the Joker and coming up with the name for Robin, which isn’t often mentioned. The costume was a joint affair with Bob and Bill and me, we all pitched in different bits and pieces. The costume, like the name, was based on Robin Hood, not ‘Robinson’ the Boy Wonder, as some publicity said at the time. When you’re seventeen or eighteen and you want to appear older, you don’t want to be called a boy wonder. You don’t want to be a boy anything.” 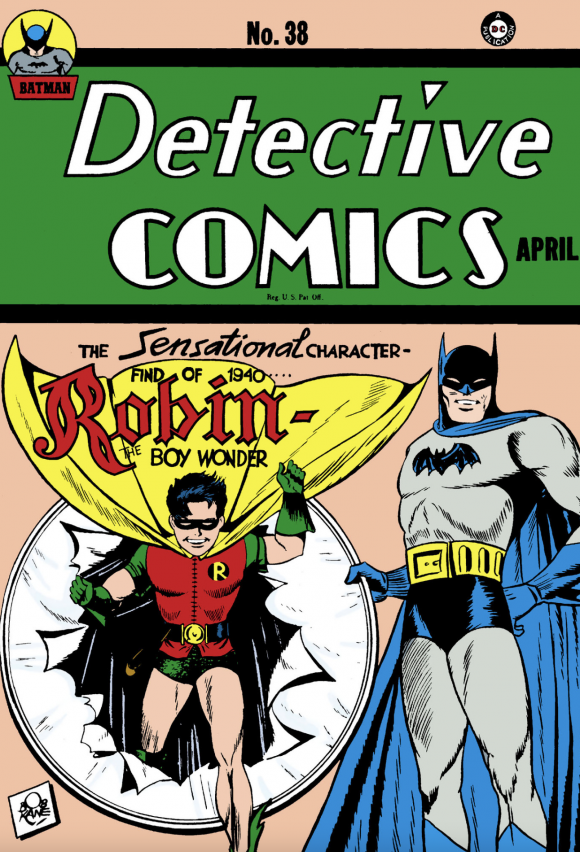 The Joker (DC, 1940). From the very first story in Batman #1 (Spring 1940), the Joker wasn’t clowning around, leaving his victims with their faces twisted into rictus smiles of death. Jerry was rather adamant about his part in the Clown Prince’s creation, “I was responsible for the initial concept drawing and name of the Joker, the playing card, and that first sketch which has been reproduced everywhere. The rest was really a collaboration. Bob and all of us would throw ideas around and then they would get fleshed out. So, I would say, things were mostly co-creations, except that the original concept of the Joker… that was my concept. Bill wrote that first story and I think in words rounded out the concept and deserves as much credit as Bob or myself. And Bob fleshed out the rough visual of the character.” 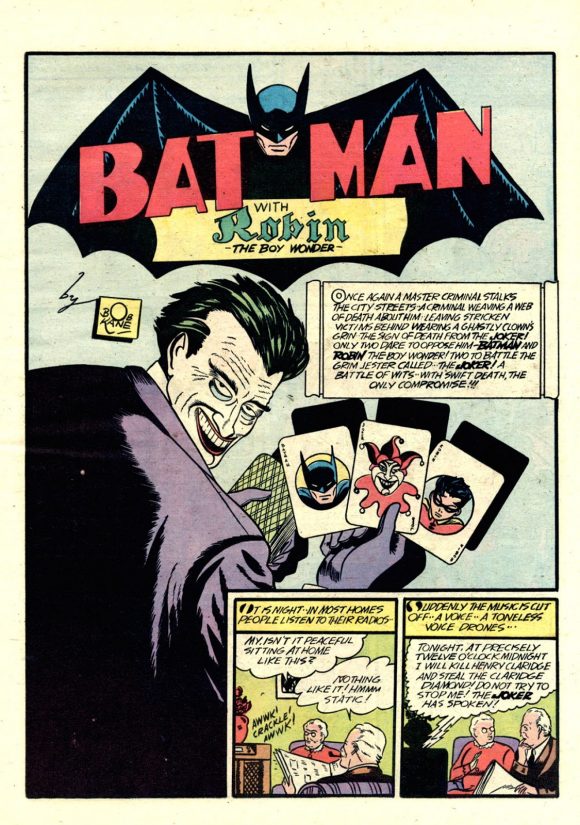 Kane and Robinson pencils and inks

Atoman #1 (Spark Comics, Feb 1946). Atoman was just another 1940s “atomic powered” superhero. Written by Ken Crossen for a lower-rung publisher, he only lasted two issues before the publisher blew up, but the strip did have the enormous advantage of being drawn by Jerry. 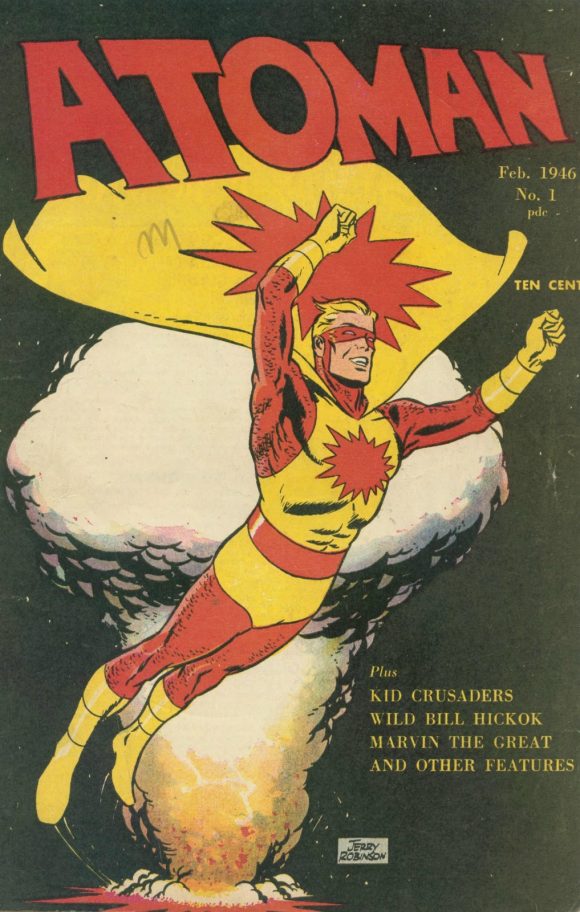 The Black Terror #24 (Pines, Sept. 1948). Mort Meskin was an artist whose own considered legacy lived on in the influence he had on younger illustrators who followed in his wake, notably Joe Kubert and Steve Ditko. The Black Terror, a pharmacist who gave himself super-strength and invulnerability through huffing some drug he mixed up in the back room, had two things going for him: a cool costume, and art by talents like Shelly Moldoff and George Tuska prior to the Robinson/Meskin run, of which Jerry remembered, “That was a good time. We worked together so well and knew each other so well. I think he’s one of the unsung heroes, a master of the comics of that era. I think we both did some of our best work in that time.” 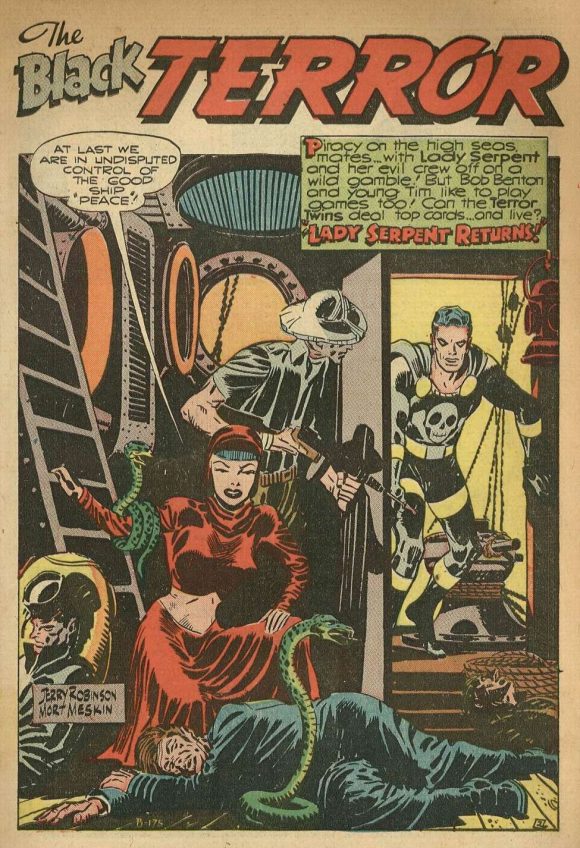 War Comics #13 (Atlas, Sept. 1952). “It was at that time, I think, that I got together with Stan Lee. I worked with Stan for a good part of the 1950s at Atlas Comics, just before it became Marvel. I did all sorts of things, some books continuing, a lot of one-shots or I’d do a story for the various magazines. I did a lot of Westerns, science fiction, crime, war. Sometimes I did the whole book, sometimes just the lead. I worked very well with Stan. I thought he was a very good editor. I think that’s kind of a lost period. Nobody remembers that stuff now.” 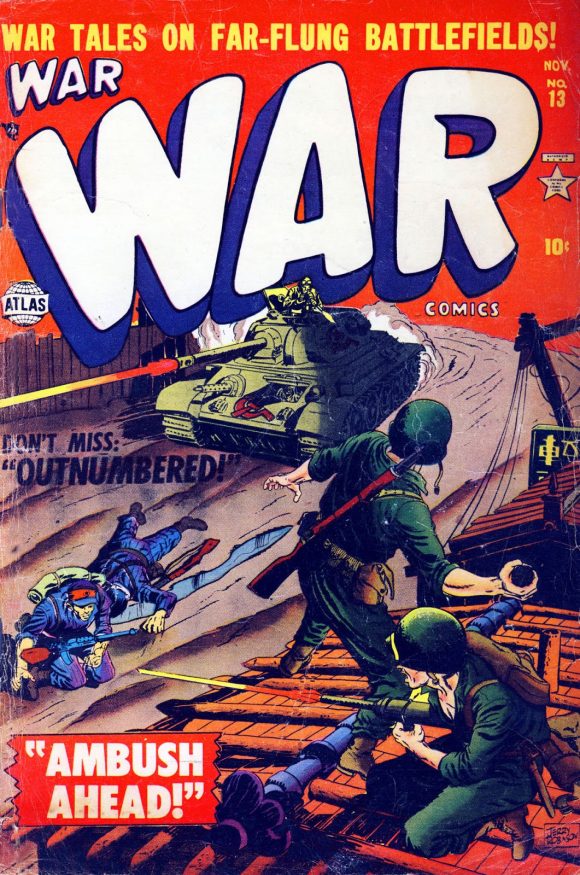 Jet Scott (Herald Tribune Syndicate, Sept. 28, 1953-Sept. 25, 1955.) Jerry’s next stop? Outer space! “Then at one time in the 1950s I signed a contract with the Herald Tribune Syndicate to do a science-fiction strip called Jet Scott for a couple of years, daily and Sunday. (Written by Sheldon Scott.) And that went quite well and at the end of two years we were in a big debate whether to continue it. Me particularly because it was very illustrative and an enormous load of work. I don’t think I had a day off for two years. And you know a comic strip is an unending struggle. One is eaten up every day.” 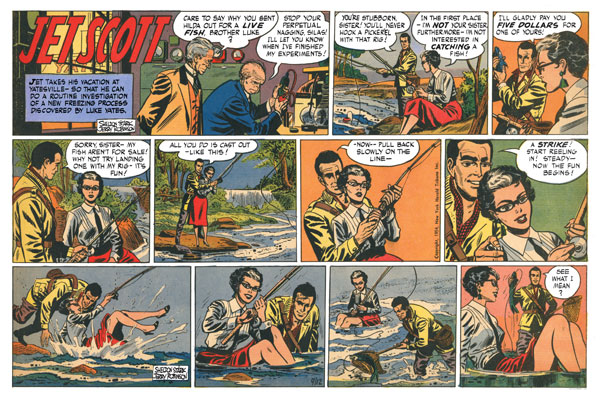 Bat Masterson #2 (Dell, Feb./March 1960). “Then I did a lot of work for Western Publishing. I did a number of books for several years, like Bat Masterson, a lot of adaptations of movies that they specialized in. Lassie. I really got to hate that dog. I would invent ways of hiding Lassie. If she was running across a field, I’d hide her in tall grass so all you could only see was her tail. If she was coming onto a room, I’d just show her nose poking around the door.” 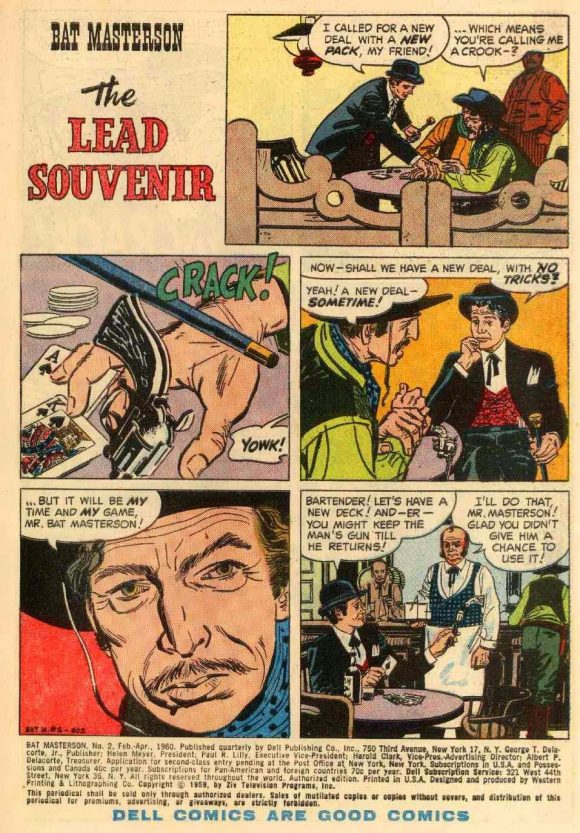 Still Life With Robinson (Chicago Tribune Syndicate). “In 1961, I started doing political cartoons. I signed a contract with the Chicago Tribune-New York News Syndicate for Still Life, a strip using inanimate objects that commented on the news. It was rather avant-garde for the day, and I tried to do something intriguing with the graphics. It was a daily panel of political and social satire. I really enjoyed doing it and getting back to my roots in journalism. I was always very interested in politics. History and political science were always my favorite subjects.” 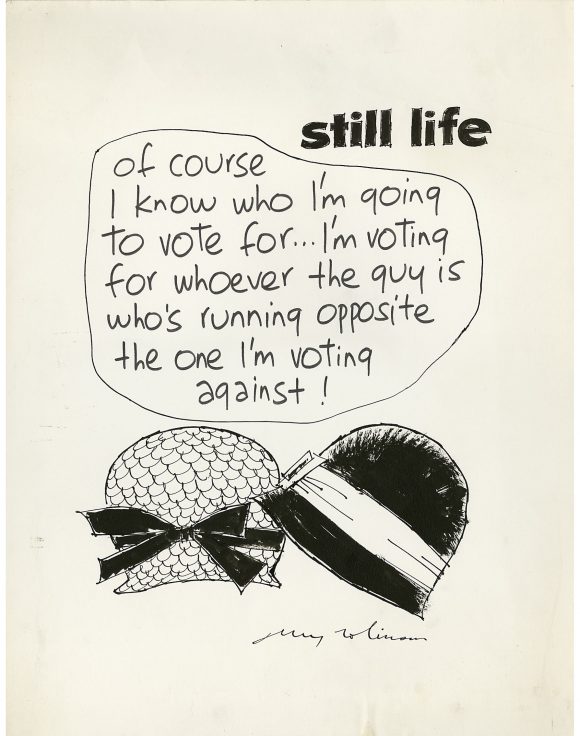 True Classroom Flubs and Fluffs (New York Daily News Syndicate, 1962 – 1979). “I came up with the idea for Classroom Flubs and Fluffs for the News’ Sunday comics section. That was really fun, because I had a whole half page in the Sunday comics section every week and I could do anything I want. I would get up to fifteen hundred letters a week. At one point I was getting more mail than the president. And it was coming from all over the world. It was incredible.” 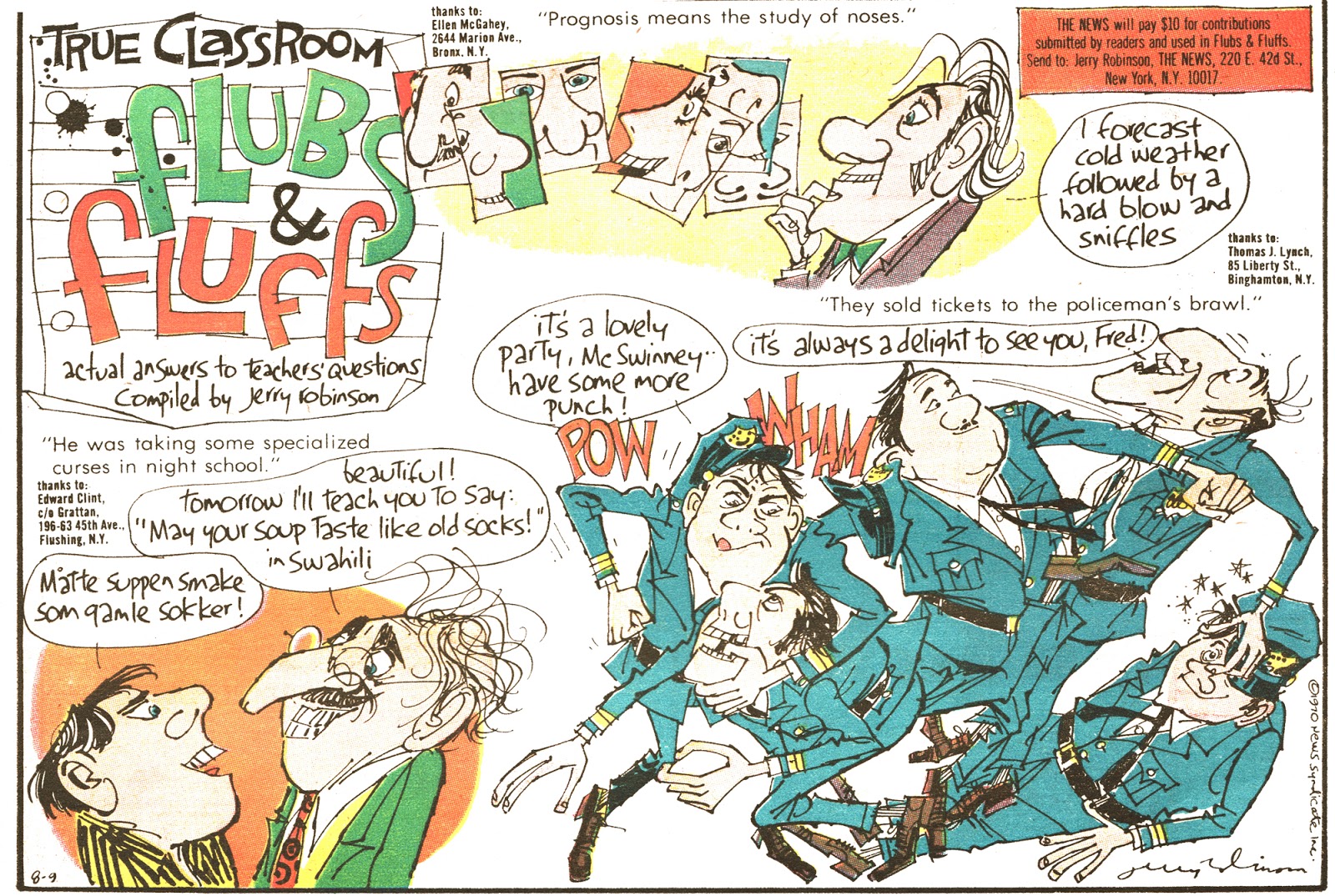 The Magic Tunnel (Scholastic Books, 1964). I bought this book by Caroline D. Emerson at the Scholastic Book Fair at my elementary school (P.S. 233, Brooklyn) based about 45 percent on the back-cover copy (kids find themselves transported by a weird New York subway ride back to the final days of Dutch rule and are befriended by New Amsterdam colonial mayor Peter Stuyvesant) and 55 percent on that regal cover image. It was only after finding the book again in 2010 that I realized Jerry Robinson — whose comic work I hadn’t even been aware existed when I first bought it — had done the cover (and interior illustrations) of this beloved childhood favorite. 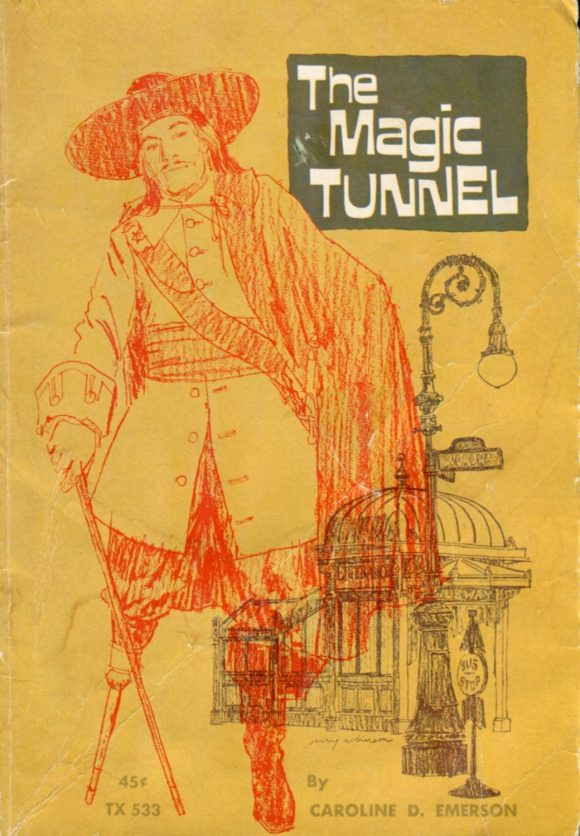 Astra (CPM, 1999). What’s more interesting than the fact that in 1999, Jerry created, with artist Shojin Tanaka and Ken-ichi Oishi, the manga series Astra, about a beautiful alien princess from an Amazonian race on a quest to find a savior can keep her female-only civilization from dying out? How about that the series originated as a stage musical he co-wrote with Sidra Rausch that was later staged at Washington DC’s Warehouse Theater in 2007? The Comics: An Illustrated History of Comic Strip Art (Putnam, 1974). “I knew nothing about comic books. I used to enjoy the newspaper comic strips. I remember on Sundays we would get the Philadelphia Inquirer or the Record because they had the best Sunday comics. And when I was younger, I used to see these books that reprinted the syndicated strips, but that was it,” Jerry remembered in 1990. He kept up his interest in the newspaper strips and their history, authoring this comprehensive 1974 retrospective. Skippy and Percy Crosby (Holt, Rinehart and Winston, 1978). From the general to the specific, a few years later, Jerry turned his attention to the unhappy life of newspaper strip artist Percy Crosby and his then popular, now largely forgotten, strip, Skippy. “It was very strange. I went in one day and Julie Schwartz said to me, ‘We want to try superheroes again.’ And I said, ‘Oh, Christ, not those again!’ He told me they were going to try the Flash again. Work was scarce, so I said OK, why not? But I can’t honestly tell you that I knew it was going to be a big hit. I suspect I didn’t think anything of the sort at the time. I went home, I drew it from Robert Kanigher’s script, with Joey (Kubert) inking and that was Showcase #4.”