DIRECT COMMENTS: The celebrated Mr. K pays tribute to one of the all-time greats — the late Carmine Infantino…

“My very first published story was a strip called ‘Jack Frost,’ which I did with my friend and classmate, Frank Giacoia. We sold that to Marvel Comics, which was called Timely in those days. Strangely enough, I was the inker and Frank was the penciller. There would be a complete reversal of the roles over the years. I didn’t get into comics to be an inker, but you took whatever you could get in those days; a job was a job. We didn’t really care that much. I don’t know why Frank penciled and I inked that one, but Frank was very good, very good as a penciller. I don’t know how good I was as an inker. I can’t remember back that far.”

­— Carmine Infantino, from Direct Comments: Comic Creators In Their Own Words

Long before fans embraced the concept of superstar artists, Carmine Infantino (May 23, 1925–April 4, 2013) was a superstar artist. I remember reading somewhere Carmine saying that by the 1960s, he was more interested in the design of his pages than the accuracy of the anatomy or perspective in his art. I think he was being somewhat disingenuous (or maybe not; Carmine wasn’t a particularly modest individual), but his work did stand out from the largely homogenous DC house style. I loved his work in the early 1960s, from the Flash to Adam Strange to Batman and wherever else it popped up. Infantino was the first artist I ever learned to identify by sight. 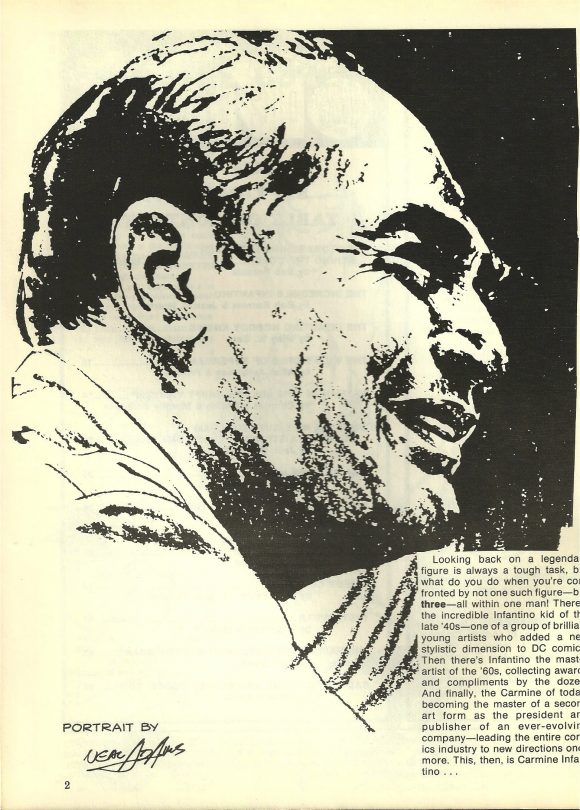 I first met Carmine in 1971. The last time I spoke to him was at a 2010 New York comic con, both of which I related in a 2013 memorial post. He was sitting alone at his table during a lull in the signings, so I went over, stuck out my hand, and said, “Hi, Carmine. How are you? It’s good to see you again.”

Carmine looked slowly up at me with a suspicious glare. “Are you still working for those sons of bitches?” he growled.

“Those sons of bitches” was DC Comics, the company for which he had worked since 1947 as a freelance artist, and on staff, rising to the position of publisher until he was “let go” in 1976. Though he returned to freelancing for DC in 1981, he never gave up the grudge he held over his dismissal and never again set foot in the company’s offices. 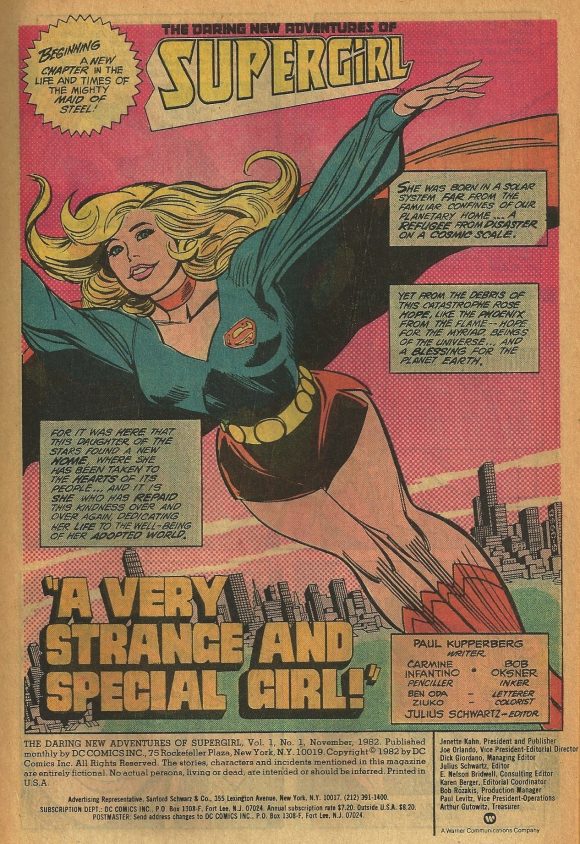 “OK,” he nodded. Apparently, I had gotten the secret password right because he smiled and only then took my hand. “How you doin’, Paul?”

Here then, MY 13 FAVORITE COLLABORATIONS WITH CARMINE INFANTINO, in (mostly) chronological order:

Green Lantern #151 (April 1982). Despite having worked with many of the best inkers in the business, I think Carmine would rather have been inking his own stuff, as he was allowed to do with this Tales of the Green Lantern Corps feature, “E’Sprit de Corps.” His longtime editor Julie Schwartz once told me he hated Carmine’s inking, calling it “scratchy and ugly,” although he would indulge the artist on the occasional back-up feature such as Detective Chimp or Elongated Man. I loved Carmine’s inks; I thought they were raw and powerfully captured his intent. 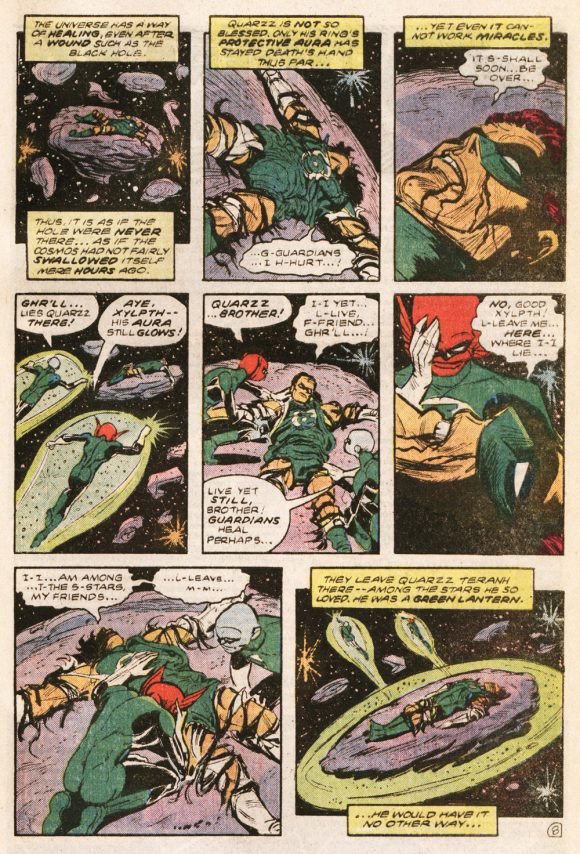 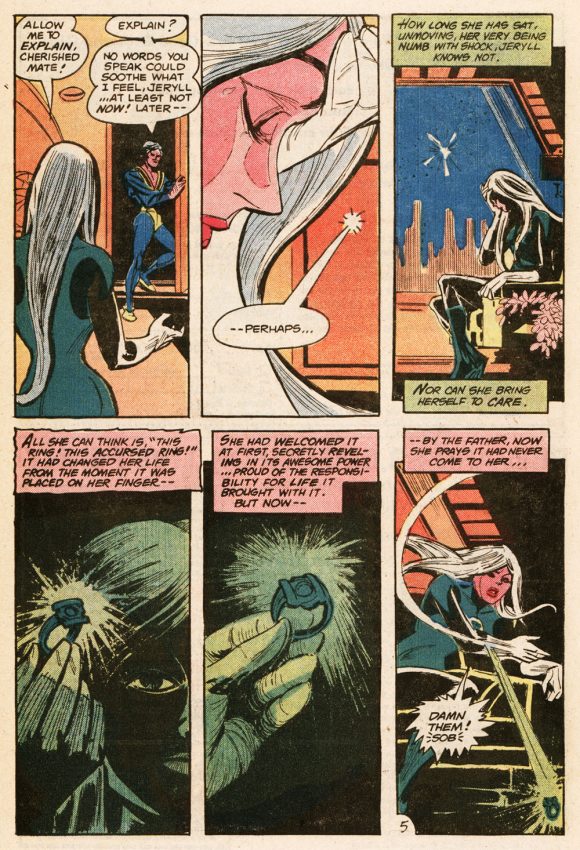 Green Lantern #153 (June 1982). “The Choice” is the second part of the previous story but inked by Frank Chiaramonte. I felt as though I was reaping the rewards from Infantino’s long run on Star Wars for Marvel. 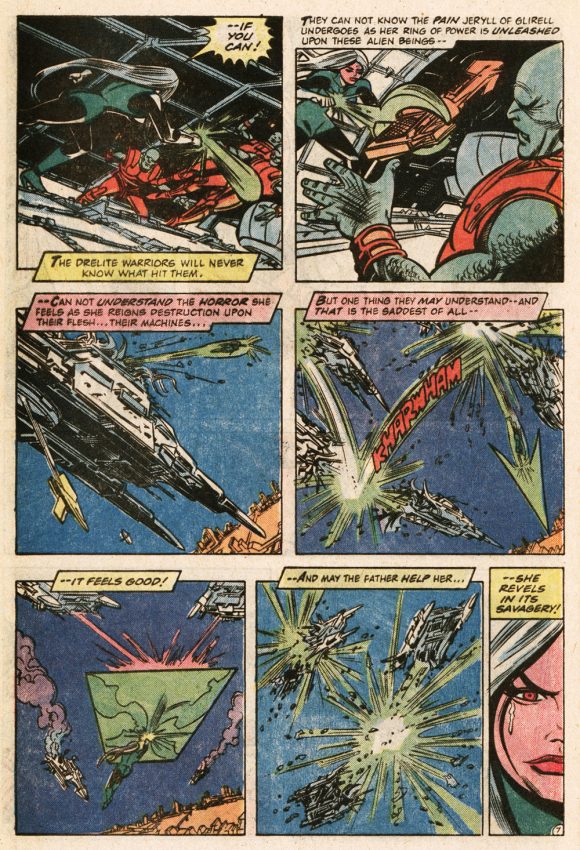 The Daring New Adventures of Supergirl #1 (Nov. 1982). That girl! Editor Schwartz teamed Carmine with Bob Oksner as inker for “A Very Strange and Special Girl,” only her second eponymous series since her 1959 debut and her first since 1972. It was an artistic match made in comic book heaven. 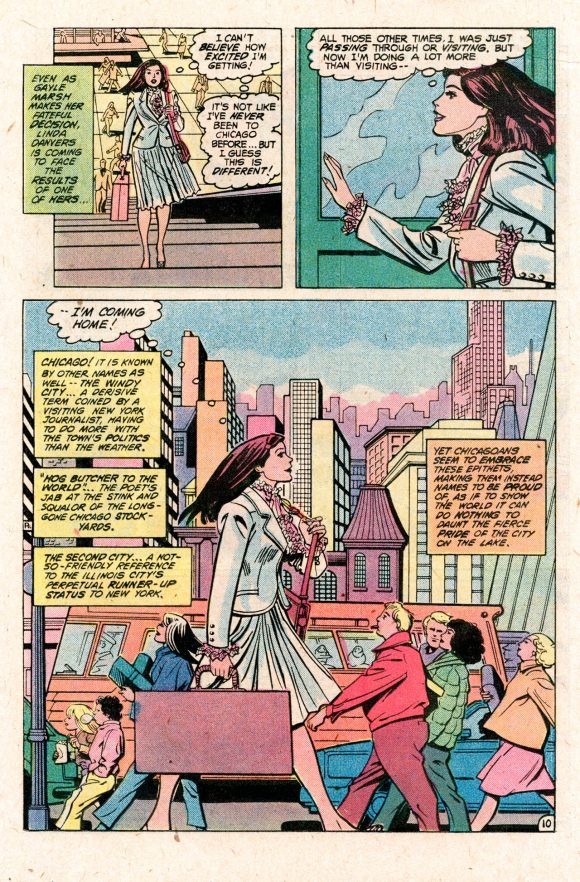 The Daring New Adventures of Supergirl #8 (June 1983). In my ongoing efforts to keep the dream of a Doom Patrol revival alive, I guest-starred them in “The Stand-Ins for Supergirl,” also inked by Oksner, allowing me to not only play with some favorite characters but see them drawn by a favorite artist. 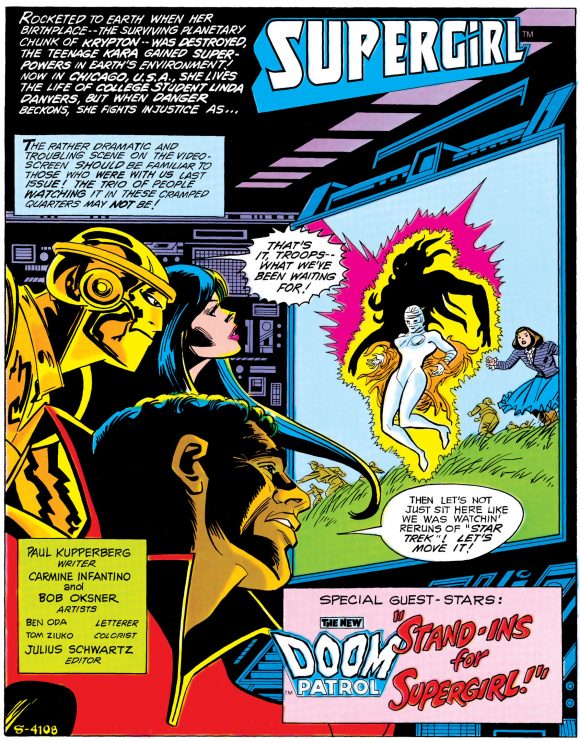 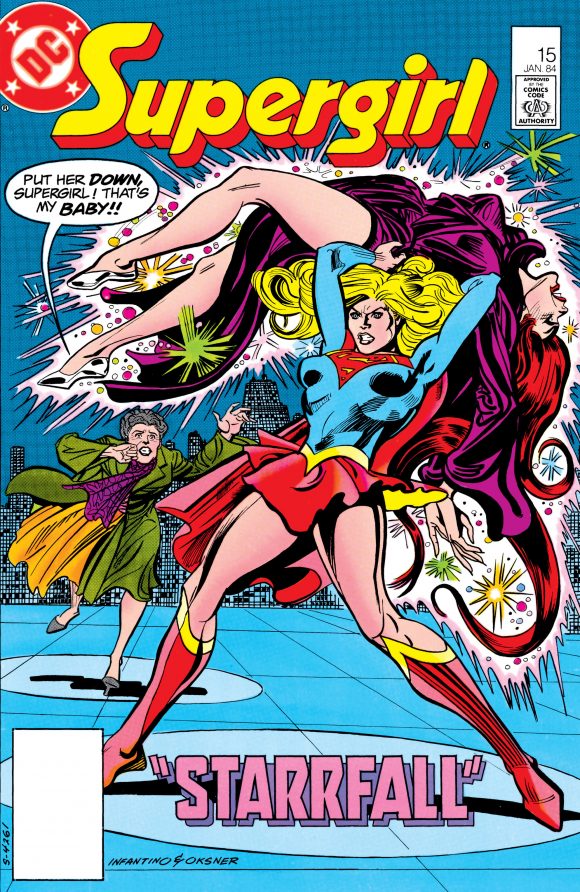 Superman #404 (Feb. 1985). As his editorial stint on the Superman books was drawing to a close, Schwartz was more willing to let writers wander off the beaten path and do some of the stories he had previously passed on. “Born to Be Superman,” inked by Oksner (why break up a winning team?), was a straight up old school “imaginary story,” a “what if?” scenario that posited a future after Superboy lost his superpowers at the age of 16. 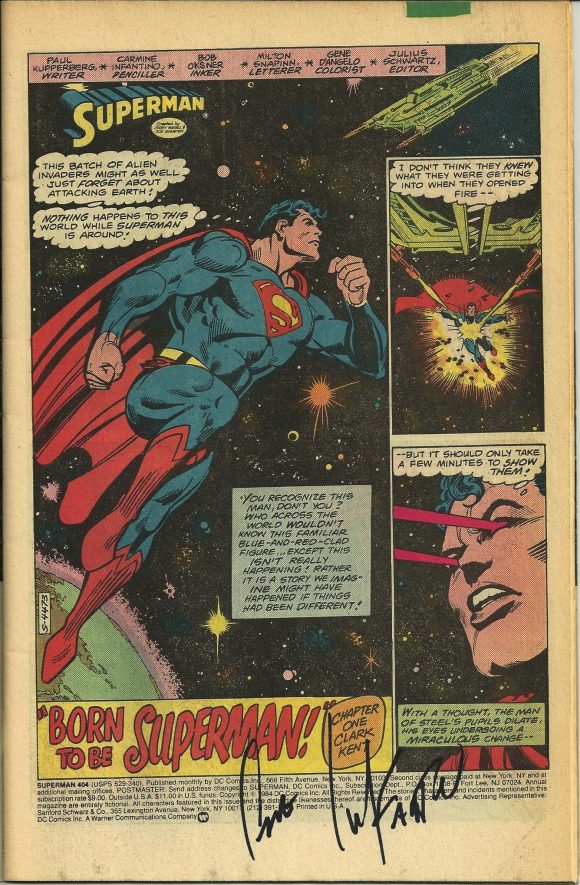 DC Double Comics Starring Superboy and Supergirl #1 (UNPUBLISHED). Scheduled for 1986, DC Double Comics was cut short by the cancellation of the existence of its headliners, Supergirl and Superboy in the upcoming Crisis on Infinite Earths. The two were to share the title, alternating between 24-page lead stories and 16-page back-ups. 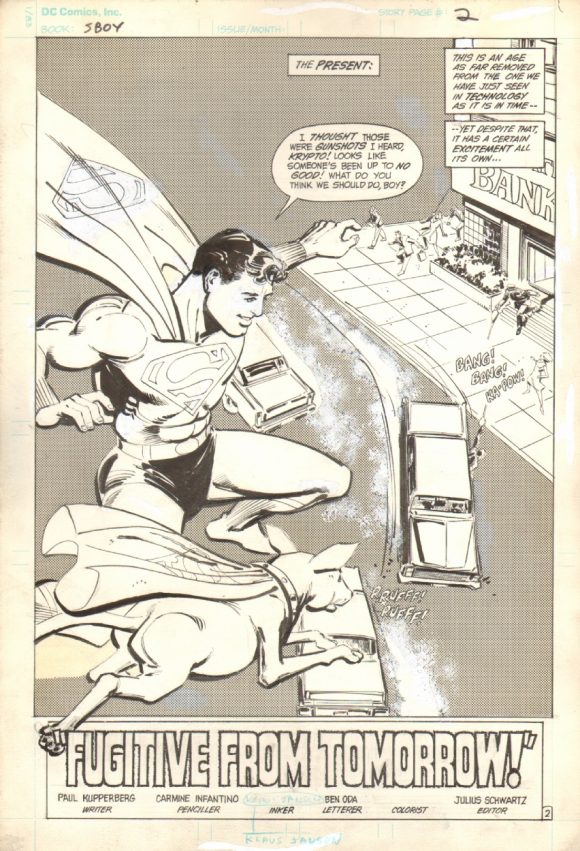 The first two issues were scripted, and the first installments penciled and lettered before the ax fell, taking each character off in new directions, with new art teams, Supergirl to be taken over by Eduardo Barreto and Oksner, and Superboy by Carmine and Klaus Janson. A glimpse of what might have been! (A look at the story directions can be found in The Unpublished Comic Book Scripts of Paul Kupperberg, available everywhere on Amazon.

Who’s Who: The Definitive Directory of the DC Universe #18 (Aug. 1986). A pin-up of Psi, Supergirl foe, from her Who’s Who profile, inked by Oksner. 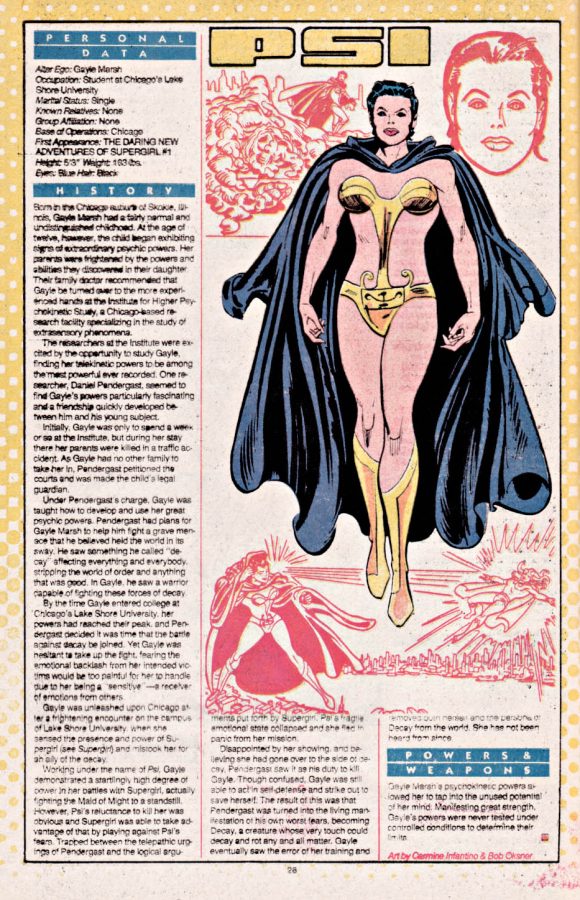 Star Trek #30 (Sept. 1986). Oh, he’s so spaced out! Carmine does Trek in “Uhura’s Story,” a tale I wrote spotlighting the Enterprise’s communications officer, inked by Ricardo Villagran. Thrill #1: Carmine drew another one of my stories! Thrill #2: In 2016, I got it Nichelle Nichols approved! Super Powers #1 (Sept. 1986). This was my second go at a Super Powers miniseries (based on the now legendary Kenner toy line), the first being 1985’s six-issue series that was penciled by none other than Jack “King” Kirby. I followed it up with this four-issue mini, this time penciled by Carmine and inked by Pablo Marcos. Needless to say, I wasn’t disappointed. Super Powers #3 (Nov. 1986). In the race to funky fashions, please note that I beat Chris Claremont putting Darkseid in a silly hat and topcoat (Sovereign 7 #1, July 1995) by nine years. “Machinations,” inked by Marcos. Super DC Con 1976 Program Book (Feb. 1976). … Which brings us all the way back to my very first, albeit unofficial collaboration with Carmine, a lovely little illustration of his that accompanied my article, “Comic Collecting: Hints for a New Hobbyist” appearing in the program book for 1976’s Super DC Con, aka the leap year “Superman’s February 29th Birthday Celebration” or “TwinkieCon.” (More about it on my website.) NEXT: The Man Who Would Draw The Brave and the Bold. Click here.

“After I graduated high school, my dad had wanted me to be a teacher, but I nixed that idea. I was still interested in art. I had a lot of jobs after high school, I did a lot of manual labor, in stores, in factories, I worked on machines, I did all kinds of things. When I clipped a little piece of my finger off in a machine I thought, ‘Oh-oh, this is not for me anymore!’ On my right hand yet. Today it doesn’t bother me, it’s all right, but I thought if I’d stayed there, my art career was going to be all over.”

— Jim Aparo, Direct Comments: Comic Creators In Their Own Words