But first, a programming note: Even as you read this, I’m a guest at Terrificon, Connecticut’s #1 Comic Con at the Mohegan Sun in Uncasville, Conn., July 30-Aug. 1 (https://www.terrificon.com/)! If you’re in the neighborhood, come see me in Artist’s Alley! (Use the secret promo code “13 Favorite” and get a knowing smile from me!)

We now return you to our regularly scheduled program:

“That was followed by a series of fiascos until about a year later, when I left the business. I just wasn’t in tune with what was going on, I guess. I had done Claw the Unconquered and All-Star Comics with Wally Wood for DC. But it wasn’t a good time for me. I was in too many fights, going against the current. That was right as the infamous DC Implosion hit. When the smoke cleared, Keith was gone. So, I took myself to South Jersey, to be near the ocean, and ended up selling vacuum cleaners, door to door. I made good money at it. Did phone collections. I essentially vanished for a good three or four years from the business.”

— Keith Giffen, Direct Comments: Comics Creators In Their Own Words

I wanted to work with Keith Giffen (Nov. 30, 1952) the first time I saw his art in an issue of DC’s Claw the Unconquered in the late 1970s. But in those days, as he indicated in the interview published in Direct Comments: Comics Creators In Their Own Words, the New Jersey-born artist did not give off a particularly approachable vibe. I doubt I ever exchanged more than a curt nod in passing with the intense, scowling figure trailing cigarette smoke down the halls of DC during those early years, and then one day, he was gone. “What happened to Keith Giffen?” I asked. I was told he had quit comics.

“I finally got up the necessary courage to try it again,” Keith remembered. “I had just barely been keeping up with the comics during that time. I’d pick up little bits here and there that interested me, but my only source for comics was one raggedy 7-Eleven and I think Germany got the comics before this place did, so there wasn’t a heck of a lot to keep up on.” 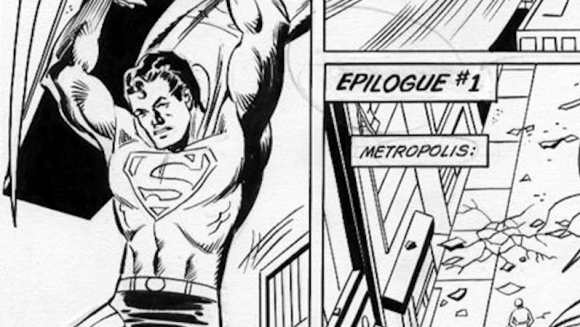 From Day One, Keith had a quirky, primitive style that crackled with a power and energy. When he came back a few years later, the primitive was gone from the work, but the quirk and energy were still very much there. And I finally did get to do a story with Keith, 1982’s DC Comics Presents #52, co-starring Superman and the New Doom Patrol in the story that introduced Keith’s Ambush Bug to the DCU. Keith sat in on the story conference with editor Julie Schwartz and myself and offered up the character as our antagonist; I was sold on the idea the moment Keith described AB as “Bugs Bunny with a teleportation device.”

Keith has shown himself to be a creative triple threat: writer, penciller, inker. And, while still a self-confessed grouch, he’s one of the funny and approachable ones. Here then, MY 13 FAVORITE PIECES OF KEITH GIFFEN ORIGINAL ART, in chronological order:

The Deadly Hands of Kung Fu #17 (Marvel, Oct. 1975). “Sons of the Tigers” inside front cover illustration, inked by Bob McLeod. 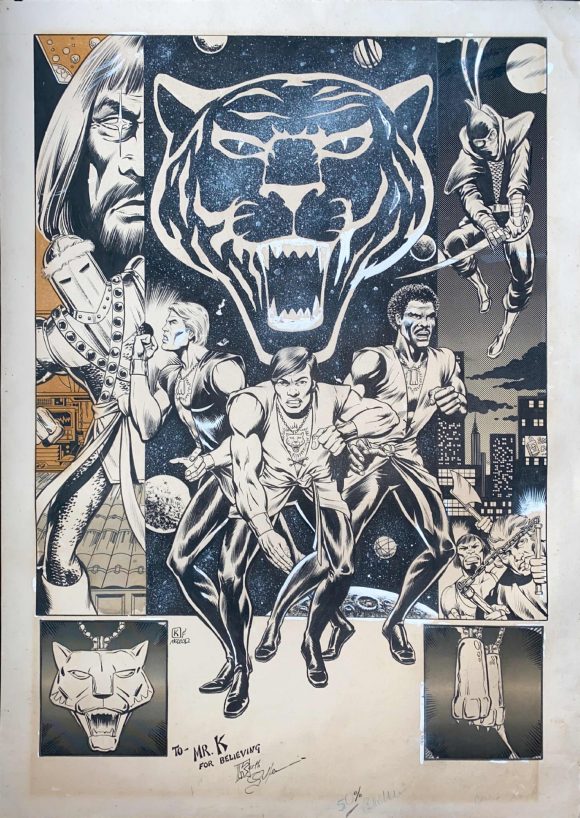 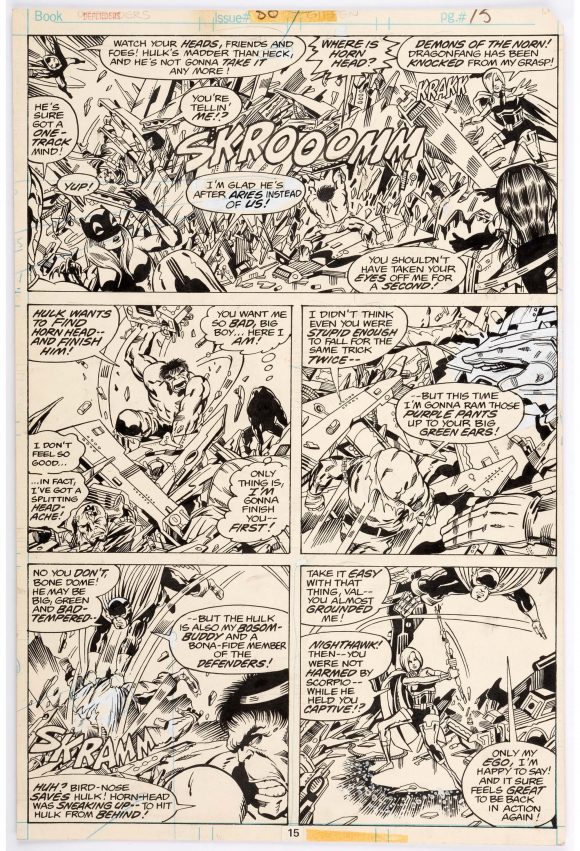 Claw the Unconquered #12 (DC, Aug./Sept. 1978). From “The Slayer,” written by David Michelinie, inked by Bob Layton, lettered by Ben Oda. 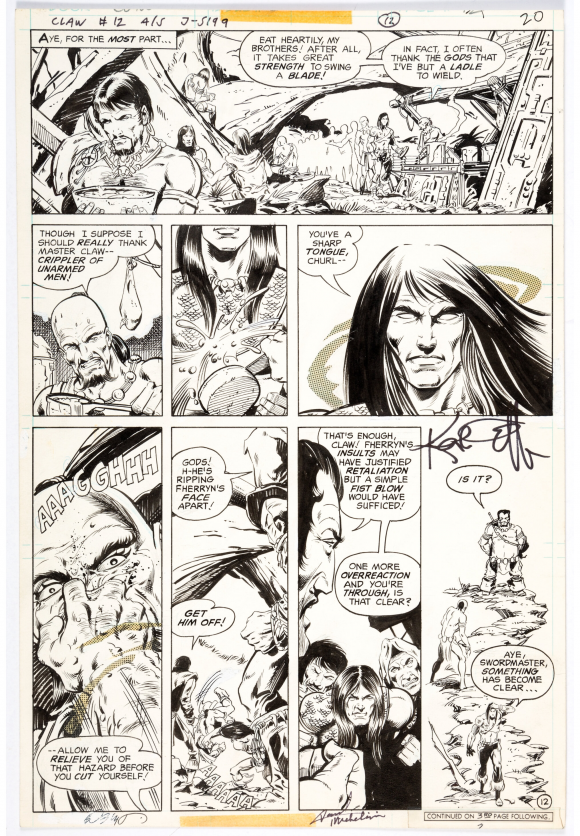 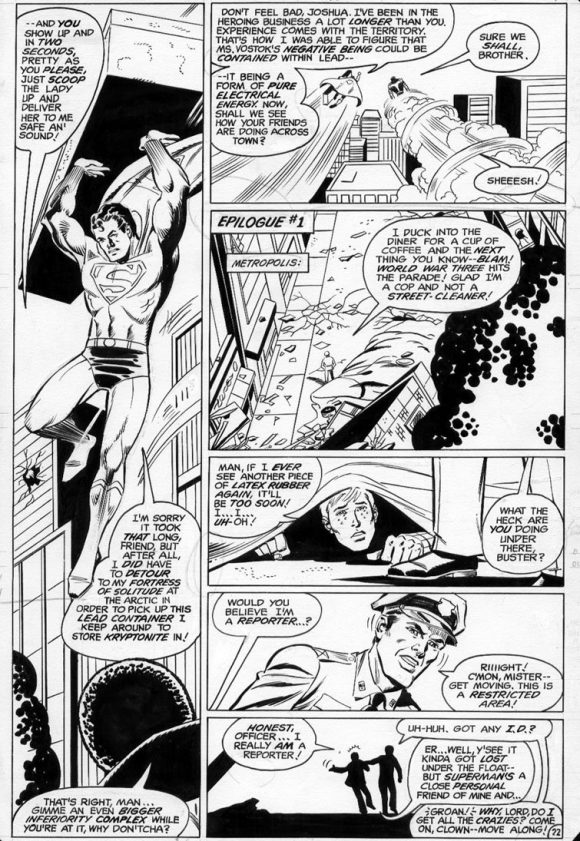 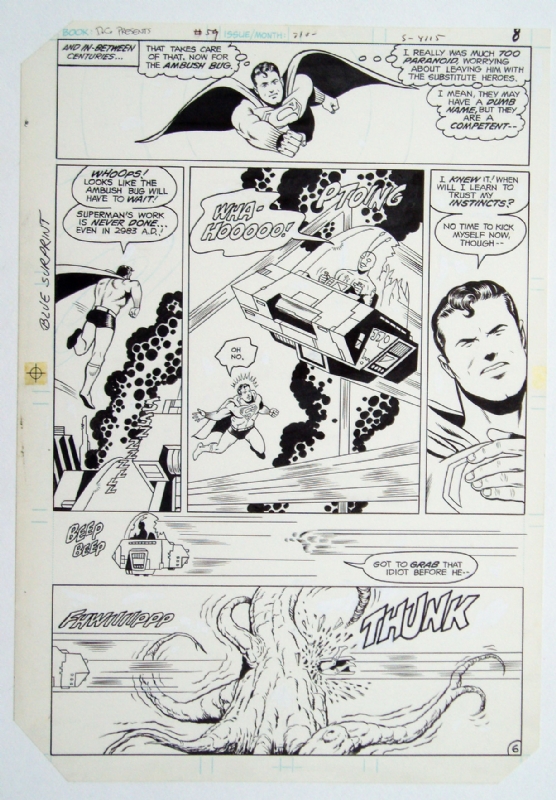 The Legion of Super-Heroes #303 (DC, Sept. 1983). From “Those Emerald Eyes are Shining,” written by Levitz, inked by Mahlstedt, lettered by John Costanza. 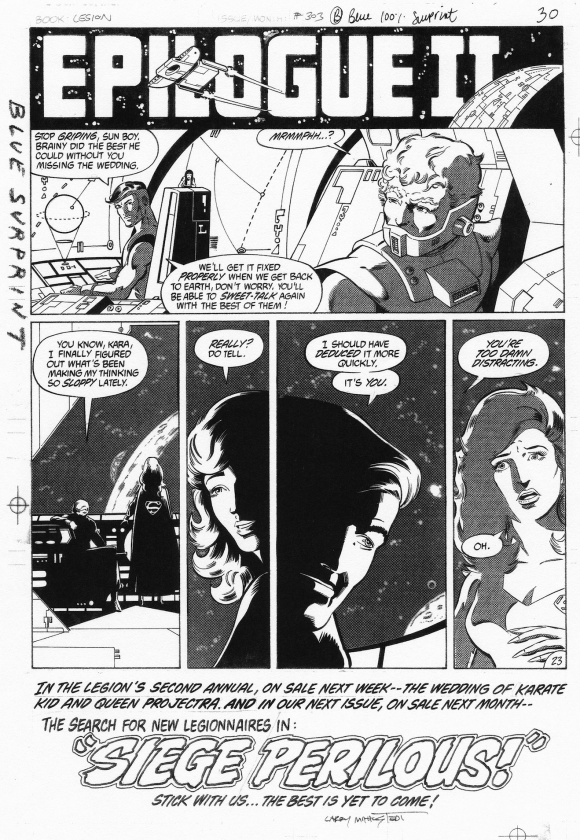 The Legion of Super-Heroes Annual #2 (DC, 1986). From “Child of Darkness, Child of Light,” written by Levitz, inked by Mahlstedt, lettered by Costanza. 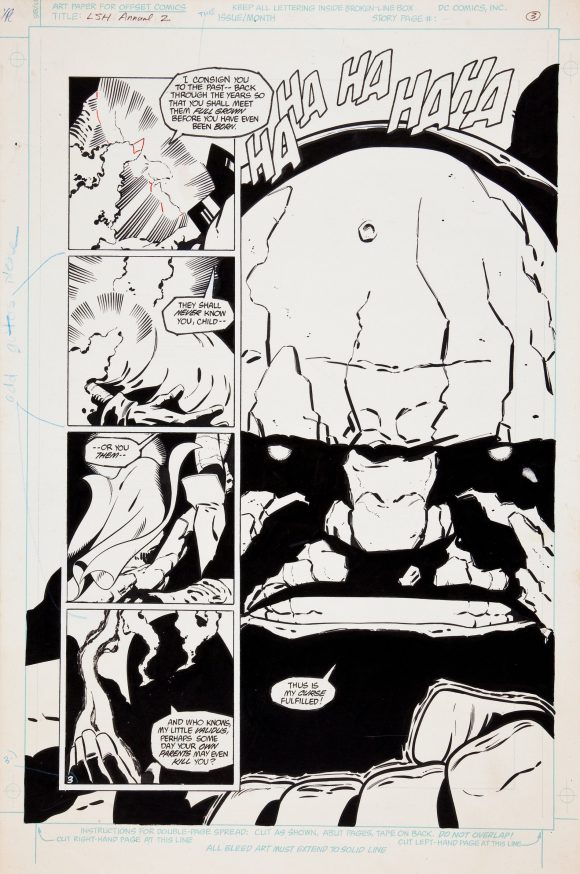 Ambush Bug Stocking Stuffer #1 (DC, Feb. 1986). From “Crisis on the Only Earth We’re Allowed to Use,” written by Robert Loren Fleming, inked by Bob Oksner, lettered by John Costanza. 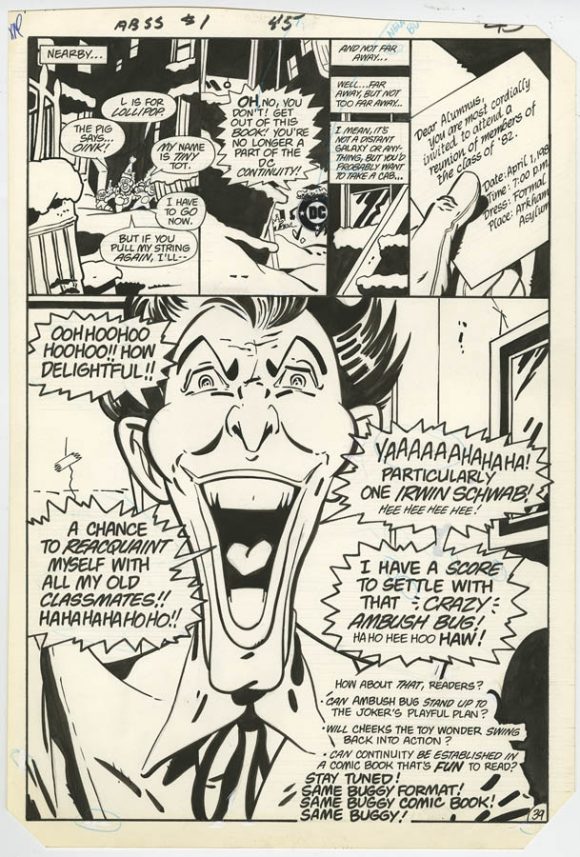 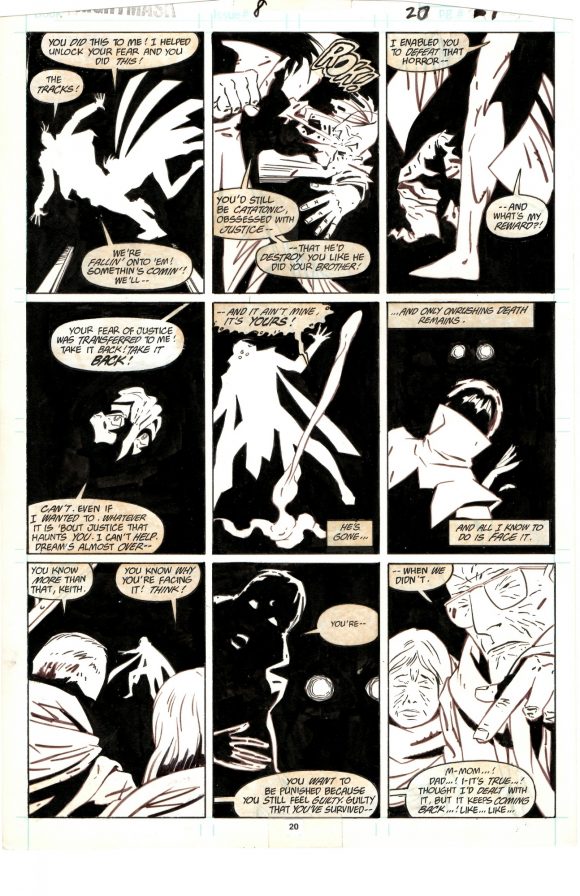 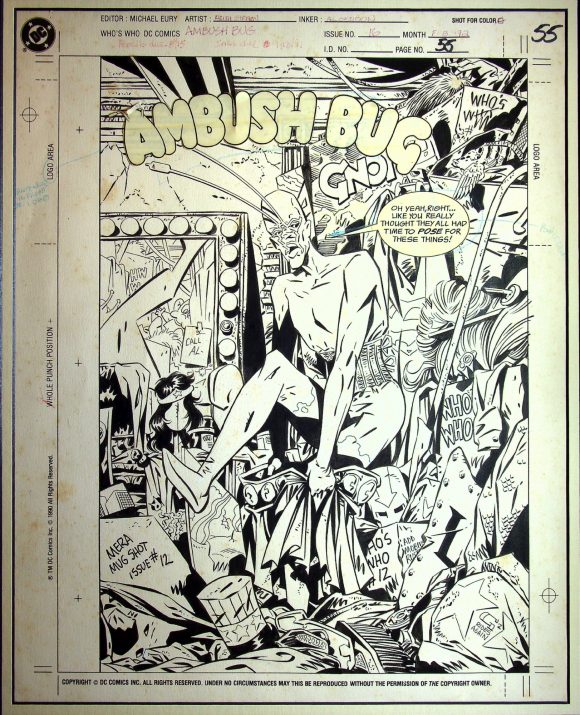 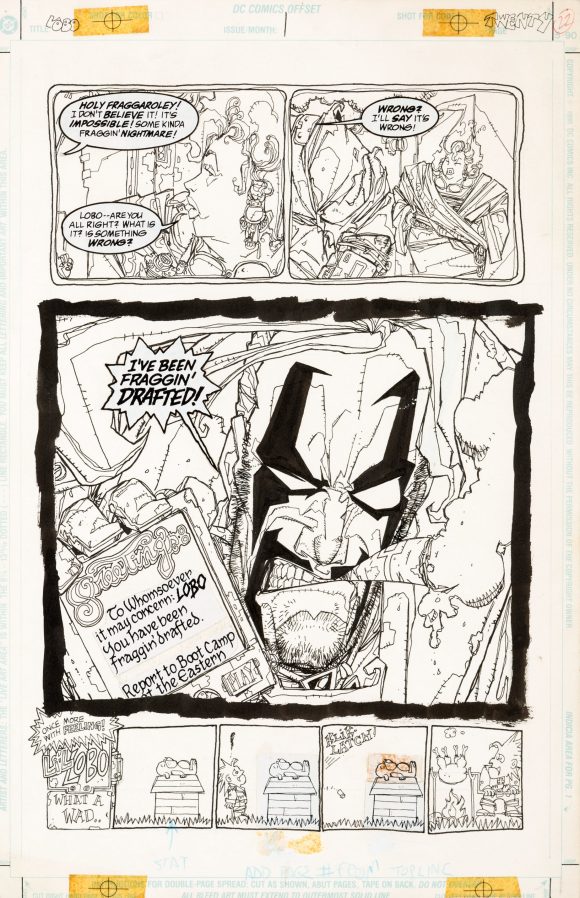 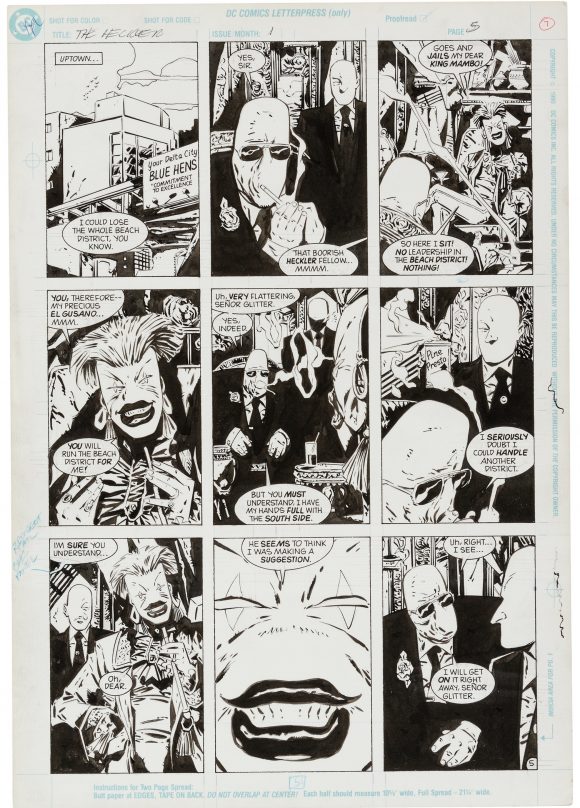 “I guess I was always an artist, but I wasn’t interested in art, as contradictory as that seems. I never thought of being an artist. I’d always drawn as a kid. They tell me when I was in kindergarten I used to lie on the floor and draw, portraits of my grandfather and so forth. But I never took art in school because in those in those days, you had to be a dullard to take art courses because they didn’t give you any credit towards college. But I was the cartoonist for the high school paper and one of the editors as well. So, in that sense I was drawing all the time but never with any thought of becoming an artist.”