DIRECT COMMENTS: A birthday salute to a comics megatalent…

NOTE: We’re having an informal DICK GIORDANO DAY here at 13th Dimension! Comics’ greatest inker (IMHO) was born 89 years ago and so today we present three separate tributes to the late artist and editor. Below is Paul Kupperberg’s newest DIRECT COMMENTS feature. But we also have a look at one of Giordano’s warmest Batman illustrations (click here) — as well as his very first Meanwhile column for DC, in which he makes nothing less that a truly historic announcement. Click here to check that out. It’ll knock your socks off. — Dan

Last installment it was Murphy Anderson. (Click here.) This time: the late Dick Giordano, who was born 89 years ago. — Dan

“In terms of the non-superhero characters, there might be some advantage to taking an old property and recreating it, although it’s somewhat riskier, so you want to have everything you can going for it. We have a wonderful El Diablo proposal in development right now. It’s completely original, with nothing to do with the original, but there’s some nostalgia on the part of some readers and most retailers for the concept of El Diablo.”

— Dick Giordano, from Direct Comments: Comic Creators In Their Own Words

I don’t think that enough time has yet passed for us to fully recognize the contributions Dick Giordano (July 20, 1932-March 23, 2010) made not just to the art of comic books, but to the business as a whole. Starting in the art department of Derby, Connecticut-based Charlton Comics when he was 20 years old, Dick drew hundreds of pages and covers for the company and by 1965 had been promoted to the position of executive editor.

He was the driving force behind Charlton’s 1967 “Action Hero” line of superheroes by such creators as Steve Ditko, Jim Aparo, Denny O’Neil and Steve Skeates, all of whom he brought with him when he was hired by DC Comics in 1968. Dick left DC in 1971 to form the comic art studio Continuity Associates with Neal Adams.

Dick was brought back to DC as editor of the Batman line in 1980 and retired as one of the company’s vice presidents in 1993. But throughout his career, Dick never stopped drawing and inking; he also mentored a generation of younger inkers, including Bob Layton, Terry Austin, and Mike DeCarlo. His credits are endless, from those early Charlton Comics tales through those historic issues of Batman and Green Lantern/Green Arrow with Neal Adams, all the way to his last published mainstream comics work, DC’s Jonah Hex #51 (March 2010). He was also a fighter for creators’ rights: The Hero Initiative created the Dick Giordano Humanitarian of the Year Award in 2010, in memory of his dedication to the well being of his fellow comic pros.

One of Dick’s duties in his day job as executive editor in the 1980s and 1990s was the reading and approving of creator pitches. In 1992, I interviewed him for Shop Talk (an inhouse DC newsletter sent to freelancers) about the (surprisingly drawn out) process of submitting those proposals and pitches to the company. Though procedures have changed (several times!) since then, it’s still an interesting snapshot of the way the company operated at the time:

“There have been cases, I have to say, where we’ve approved things overnight. We read it, we love it, and we’ll take it! But mostly it takes longer than that, and there are, I’m sorry to say, a lot more rejections than approvals. It’s also not unusual for a proposal to go through more than one draft while everyone tries to get it right. Really, there’s no one, single path. Like I said, an approval—well, let’s say an answer—could be immediate, or it might take six months. I’d guess the average turnaround time is closer to three months.” (Read more about it in Direct Comments.)

On a personal note, I was lucky enough to not only work under Dick at DC Comics, but also to work with him both as editor and editee, as well as be part of the same creative team on several projects, and, best of all, to call him a friend.

Dick was born 89 years ago, so let’s raise our Rob Roys high and give a toast to these — scanned some years ago for the website CharltonNeo.blogspot.com (http://charltonneo.blogspot.com/) from a collection of vintage photostats belonging to fan Rob Jones — MY 13 FAVORITE DICK GIORDANO CHARLTON COVERS IN BLACK AND WHITE, in chronological order:

Six-Gun Heroes #72 (Jan. 1963). There’s nothing like seeing comic book art stripped down to basic black and white, without color to distract from the details. Dick’s distinct ink line and feathering were well defined even at this relatively early stage of his almost 60-year career. I love the little detail of the kicked-up street dust obscuring Wyatt Earp’s right foot as he whirls to fire, a subtle indication of movement that was lost in its published color form. 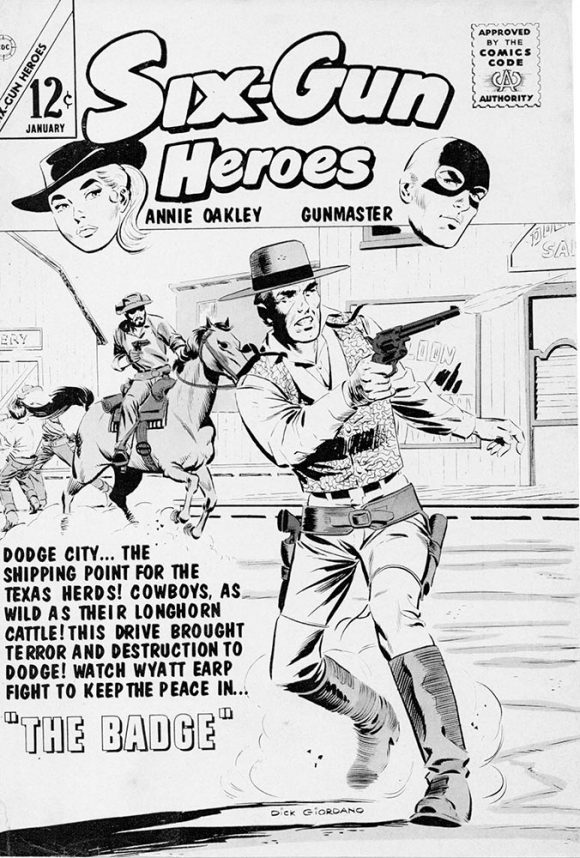 Six-Gun Heroes #74 (May 1963). Don’t shoot until you see the whites of their eyes! That moment of tension and dread, just before the first shot is fired. 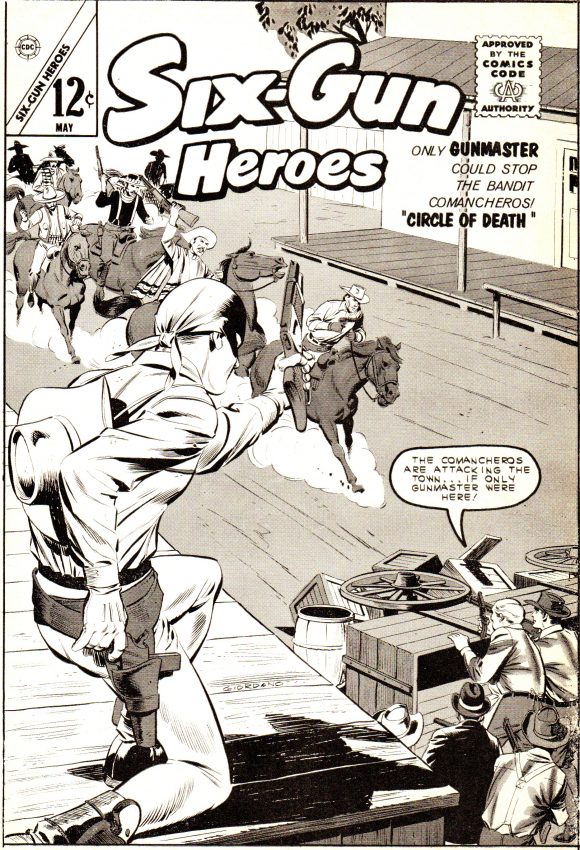 Cheyenne Kid #43 (Dec. 1963). What this cover lacks in cohesion — this could easily have been pick-ups of existing images, slapped together to create a cover, a not unheard-of Charlton practice — it more than makes up for with Dick’s wonderful Jimmy Stewart-esque portrayal of the title character. 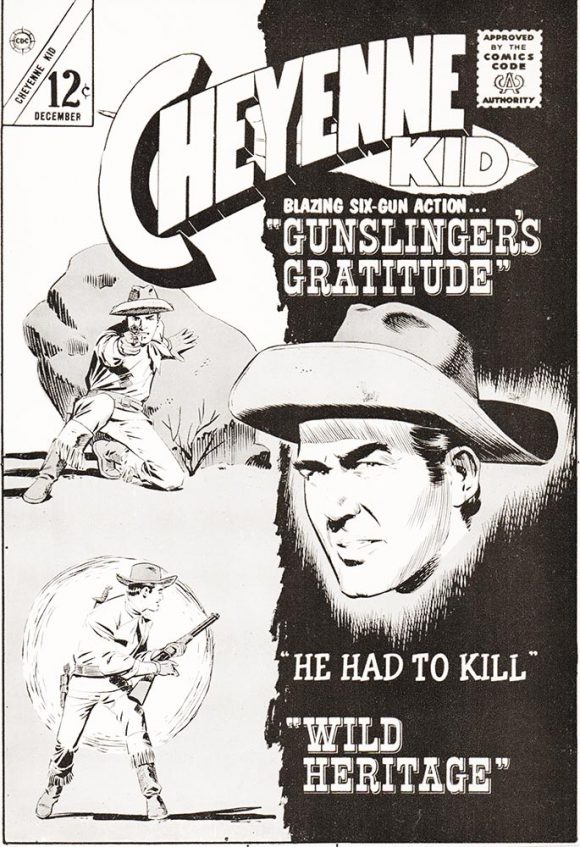 Space War #24 (March 1964). Reminiscent of Gil Kane’s great covers for the introduction of Adam Strange in Showcase #17-19 (Nov./Dec. 1958-March/April 1959), this Giordano piece holds its own against the covers of any of its contemporary science fiction competitors. 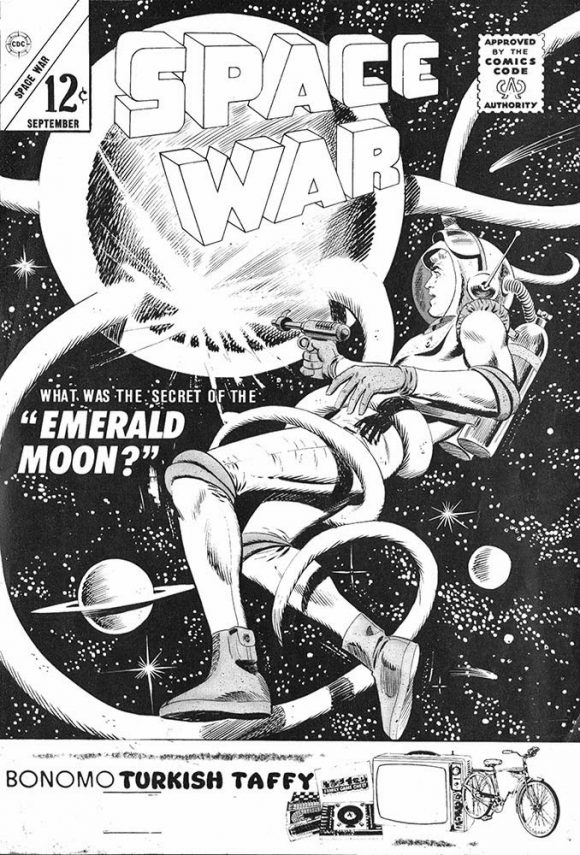 Teen-Age Confidential Confessions #19 (Aug. 1963). Here inked by Charlton romance artist No. 1 Vince Colletta, Dick appears to have brought the likeness of another contemporary personality to this cover. The master of ceremonies here bears a strong resemblance to Bert Parks, the long-time unctuous host of the Miss America beauty pageant. Or maybe I’m just projecting. 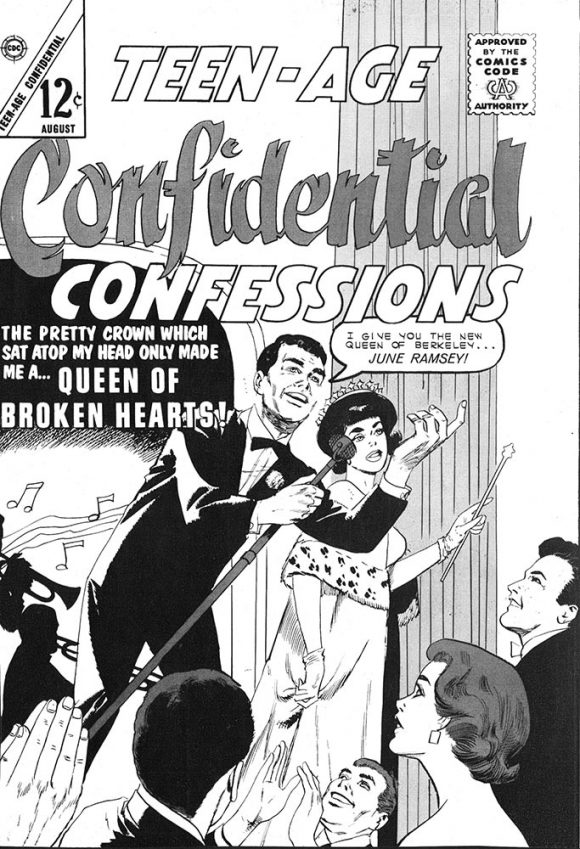 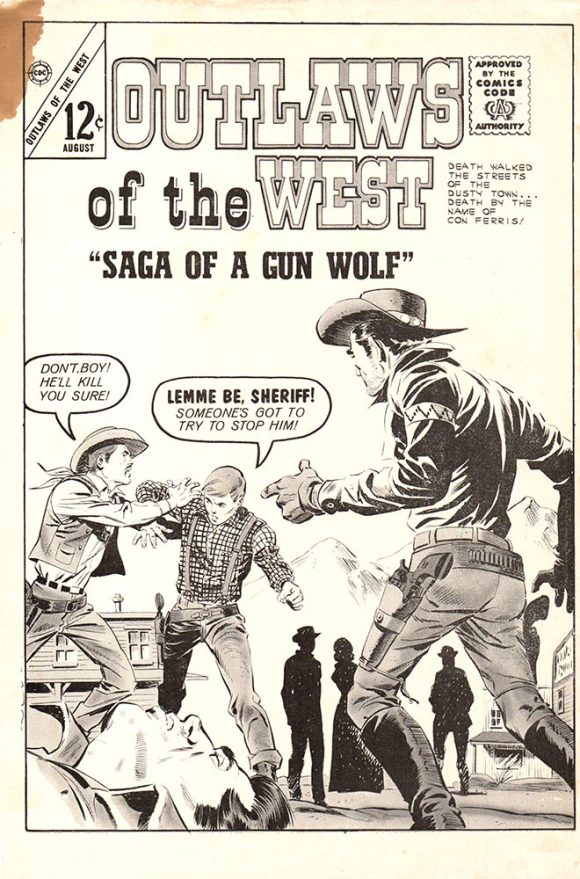 Romantic Secrets #47 (Nov. 1963). “Which story do you want we should feature on this month’s cover, Pat?” “All of ’em!” Instead of reusing panels from the stories by such artists as Art Cappello and Tony Tallarico, the choice was to go with a new piece by Dick. Good choice. 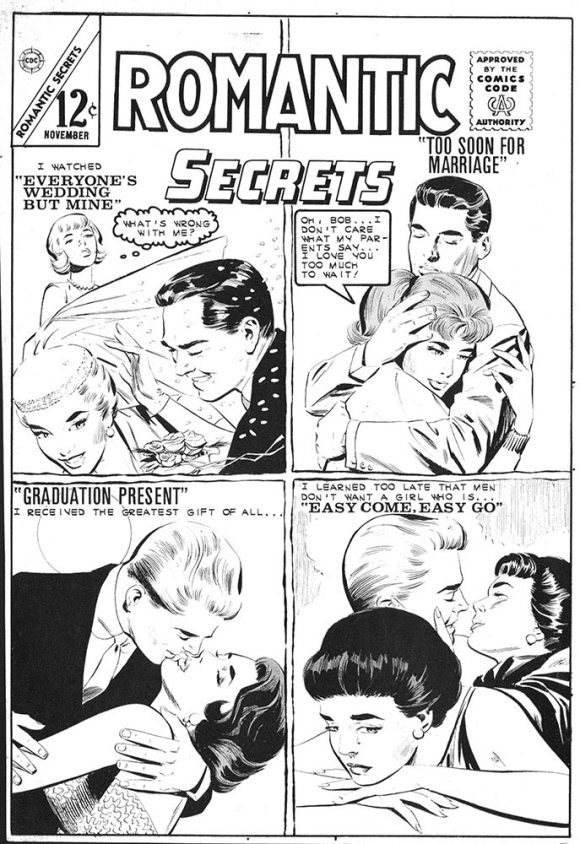 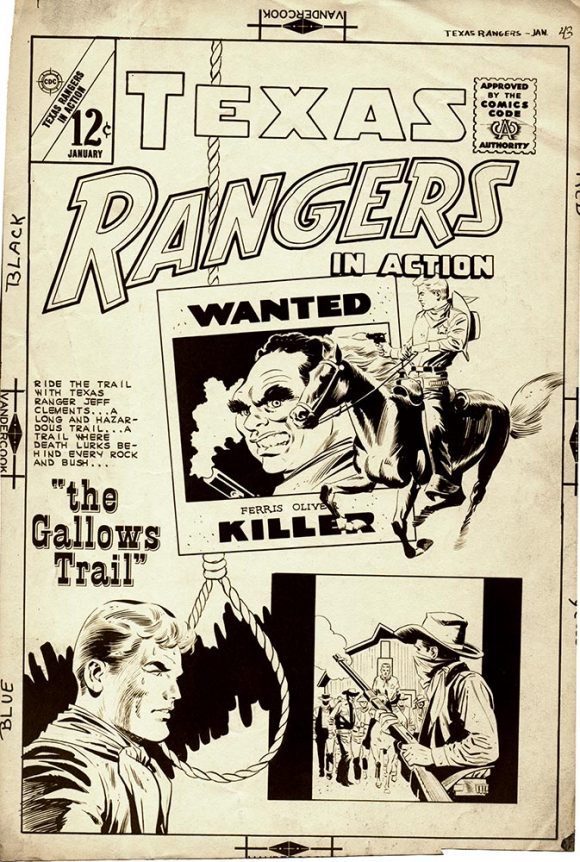 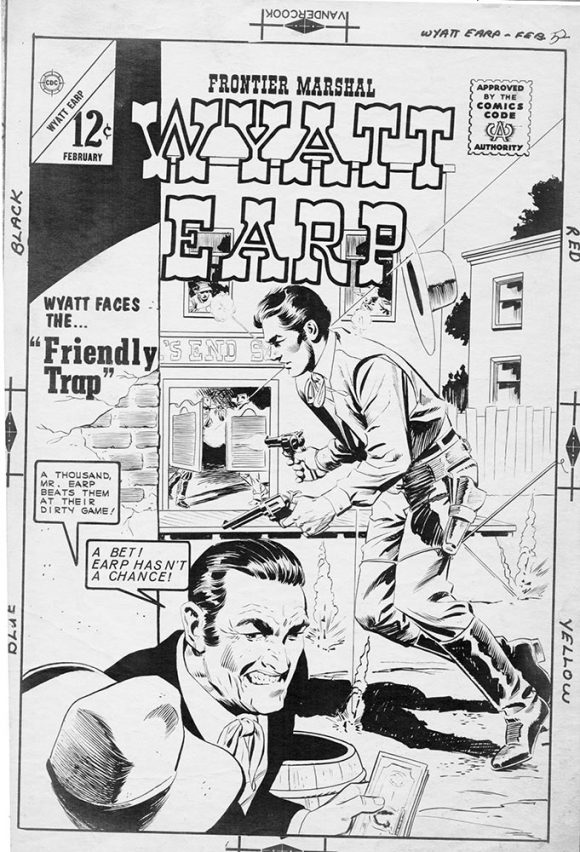 First Kiss #36 (Feb. 1964). People had weird love problems in 1964, but they sure dressed nice. Dick brings some Hollywood movie poster energy to a standard romance cover. 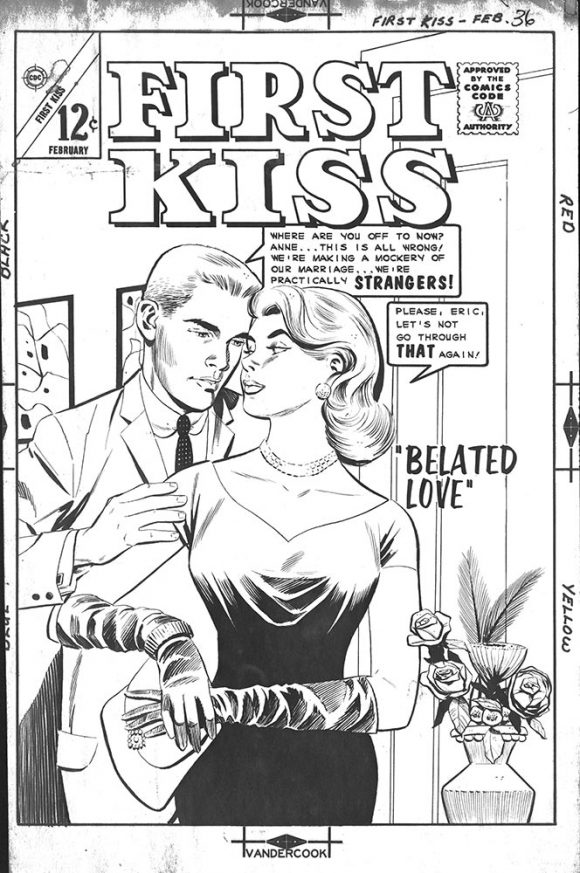 Love Diary #32 (March 1964). Not even the cheesy mechanical lettering (provided by “I. Machine,” i.e., a typewriter with a platen wide enough to accommodate the 12.5” x 18.5” original art that typed the copy directly onto the page) can ruin this delicately rendered piece. 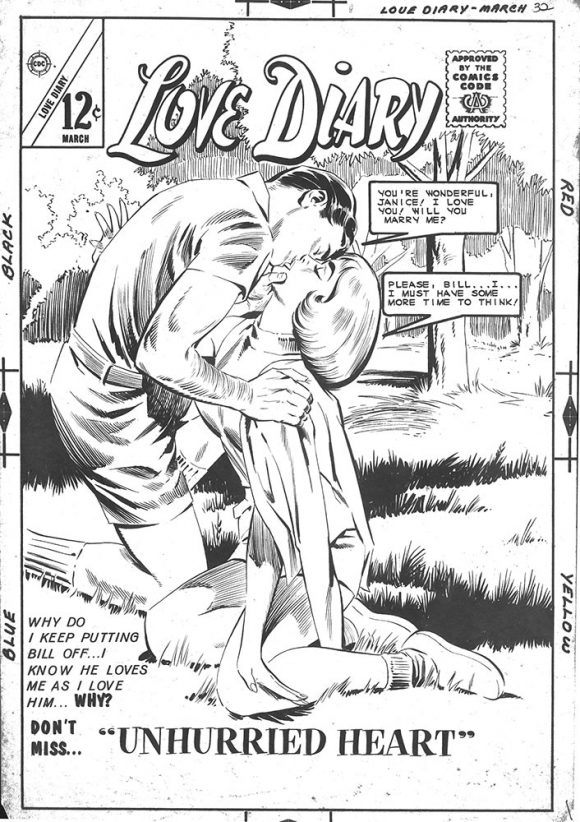 Six-Gun Heroes #79 (March 1964). Never quite achieving the status of a Robin the Boy Wonder, “Bullet, the Gun Boy” nevertheless made his debut on a cover that always made me think me of the Bob Kane/Jerry Robinson cover for Detective Comics #38 (April 1940). But again, maybe I’m just projecting. 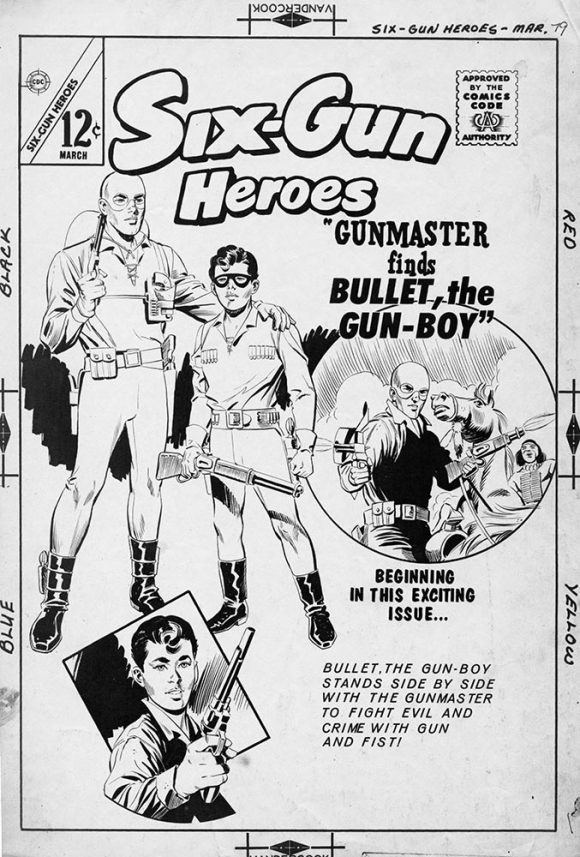 Unusual Tales #46 (Aug. 1964). A lesson in how to draw fabrics and folds in one beautifully rendered image. 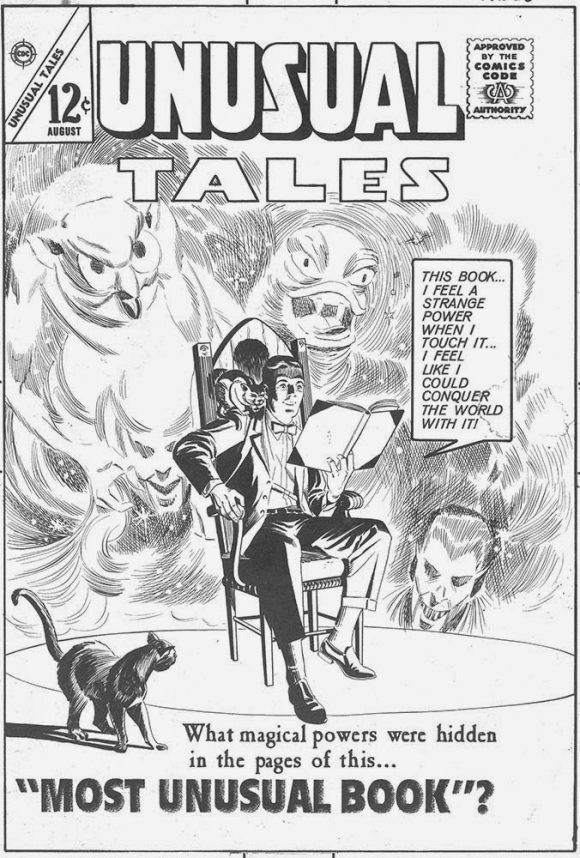 “(Marvel) were reprinting some 1950s monster stories in some of their black-and-white reprint books, like Monsters Unleashed and Where Monsters Dwell, and they needed to have these horrible, horrible, horrible stories doctored up with Zip-a-tone to give some tone and depth to them. It paid like $2.50 a page. But I was ecstatic. This was the life! This was living! I was working for Marvel Comics.”