DIRECT COMMENTS: A birthday tribute to one of the greats…

Earlier this week it was John Byrne. (Click here.) This time: the late Murphy Anderson, who was born 95 years ago. — Dan

“I was hired on Buck Rogers (in 1947). Buck was in a steady decline then. They hadn’t kept up with the times. The stories were bad. The artwork… well, Dick Calkins was doing as well as ever, but he couldn’t stand up to the competition like Raymond and Foster. Strange thing about Buck Rogers: It was released on the same day as the Tarzan newspaper strip, January 6, 1929. Both strips came out and they were the first true adventure strips.”

— Murphy Anderson, from Direct Currents: Comic Book Creators in their Own Words

Murphy Anderson (July 9, 1926 – October 22, 2015) had probably the best voice in the comic book business. Deep and mellow, his words rose from his chest and rolled like distant thunder over his listeners’ ears. He was also one of the friendliest men in the business, so if you happened to run into him at a comic book convention or (for a lucky few of us) up at the DC Comics offices, you would have ample opportunity to hear that voice in the conversation that followed.

The Asheville, North Carolina, born Murphy got his start in comics in 1944 at Fiction House, and it wasn’t long before he was drawing the daily Buck Rogers syndicated strip. Wikipedia describes Murphy as “an American comic book artist, known as one of the premiere inkers of his era.” 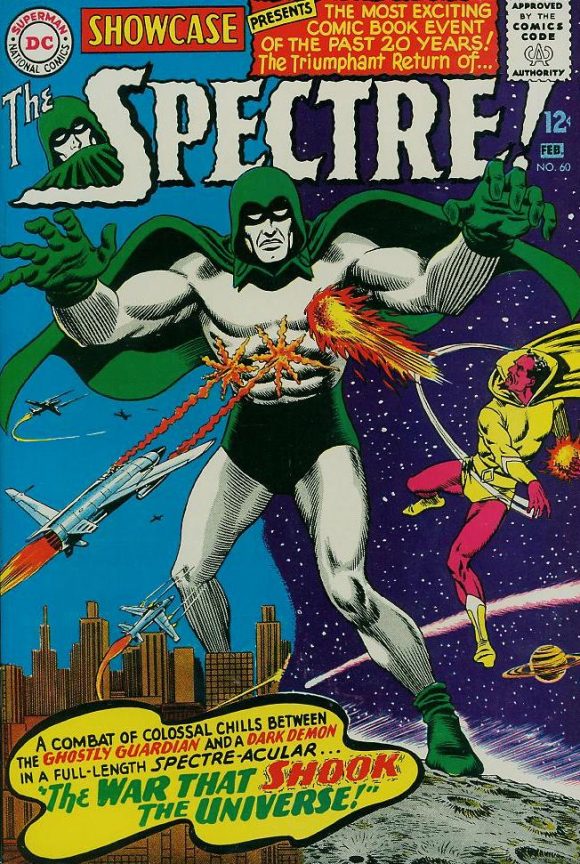 But I “discovered” Murphy first as a penciller, from his work in Showcase #60 (Feb. 1966), featuring the introduction of the Golden Age Spectre to the Silver Age continuity. 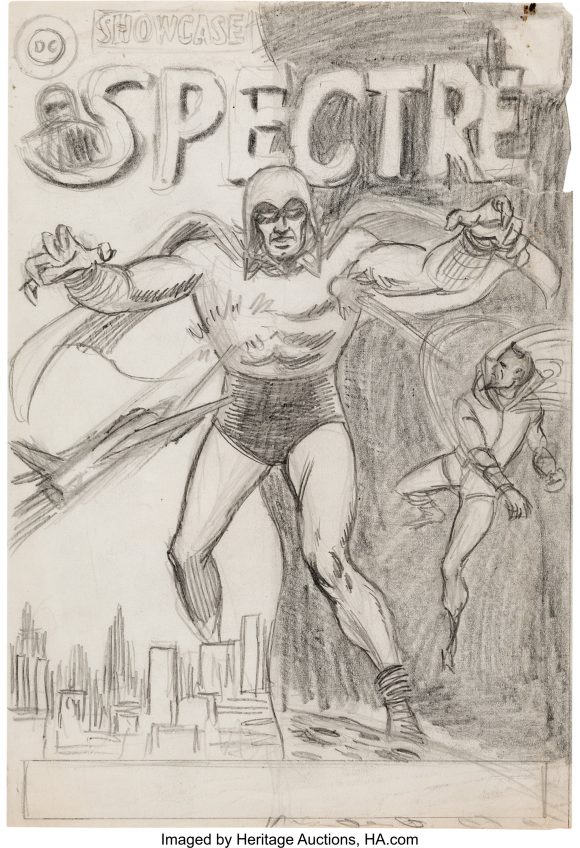 I always loved what Murphy brought to other pencillers with his unique ink style (his work with Curt Swan is both legendary and iconic), but for my taste, give me pure Murphy any time! (Except for the one time he worked on one of my projects, inking the Howard Chaykin/Alan Kupperberg pencils on the first two issues of the 1979 World of Krypton miniseries.) 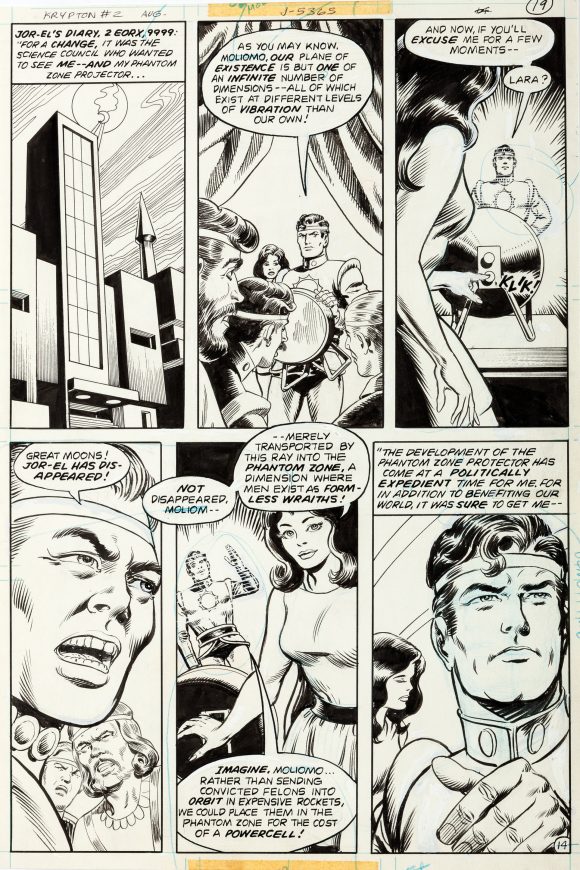 It was a happy accident that Murphy spent the bulk of his career at DC: “I had come (to New York in the early 1950s) to work for Ziff-Davis primarily, but then the day came when (they) didn’t have a script (for me),” Murphy recalled two decades after the fact. “So, I called on DC, I called on EC, and I called on Stan Lee. Julie Schwartz wasn’t in that day, but they said, ‘Come back tomorrow! You’ve got to meet Julie Schwartz!’

“So, I did come back a few days later, and Julie gave me a script. But that first go-round… EC (had) said, ‘Well, we’ll call you in a couple of weeks.’ I thought it was a polite brush-off, but eventually they did call me. By that time, however, I was swamped with a bunch of Ziff-Davis stuff and the strips from Julie, so I never took EC up on their offer.” 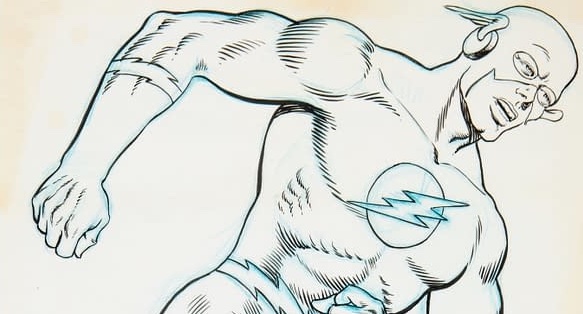 Murphy was born 95 years ago and, while he spent his career mostly in the four-color world of comics, I’d like to take this opportunity to present some of his work in a different light, stripping away the color and revealing the awesome artistry and draftsmanship beneath.

Here then, MY 13 FAVORITE BLACK and WHITE MURPHY ANDERSON ILLUSTRATIONS, in no particular order:

1. A 1983 self-portrait of the artist surrounded by some of his more memorable co-stars for an issue of The Comics Journal. 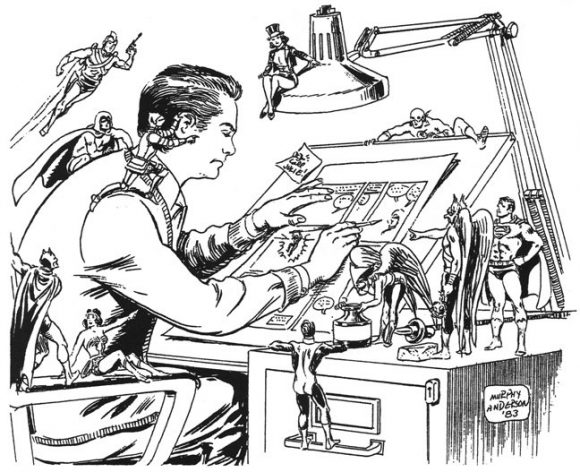 2. Much of what filled Murphy’s drawing board during the 1950s and early-1960s were science fiction stories for Julie Schwartz’s Mystery in Space and Strange Adventures anthology series, in which the editor also featured regular, rotating series, including The Atomic Knights by Murphy. This cover for Strange Adventures #159 (Dec. 1963) stuck with me since it first hit the newsstands because, at eight years old, it scared the hell out of me. 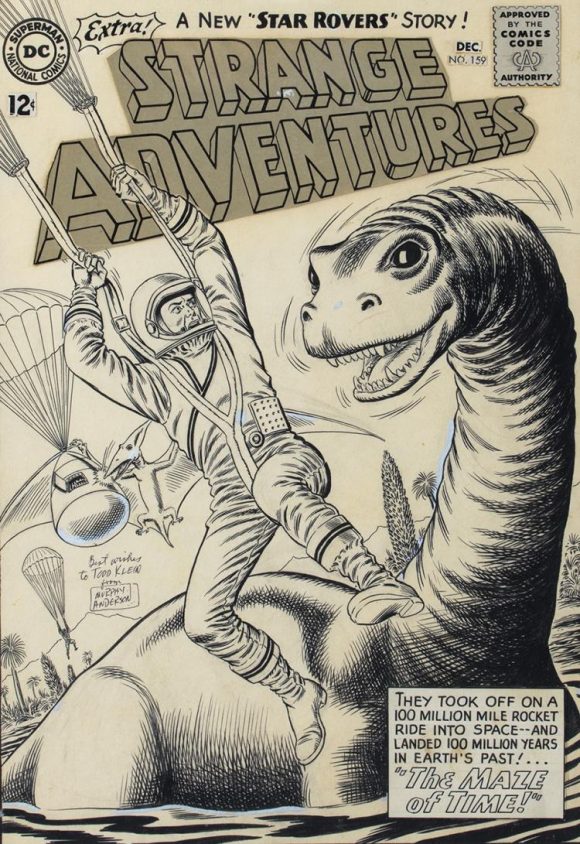 3. Beginning in Strange Adventures #12 (Sept. 1951), Murphy became the regular artist on the monthly Captain Comet feature, whom he revisited in this cosmic pin-up for Who’s Who Vol. 1 #8 (April 1991). 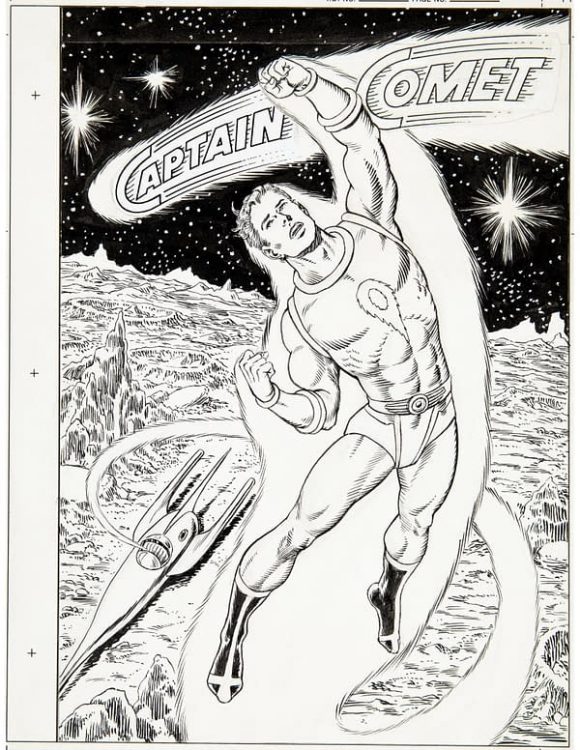 4. Murphy would serve two turns as the artist on the Buck Rogers newspaper strip, as well as doing stories for the comic-book version of the character. In 1973, the artist proved he was better than ever with this pin-up of the hero of the 25th Century! 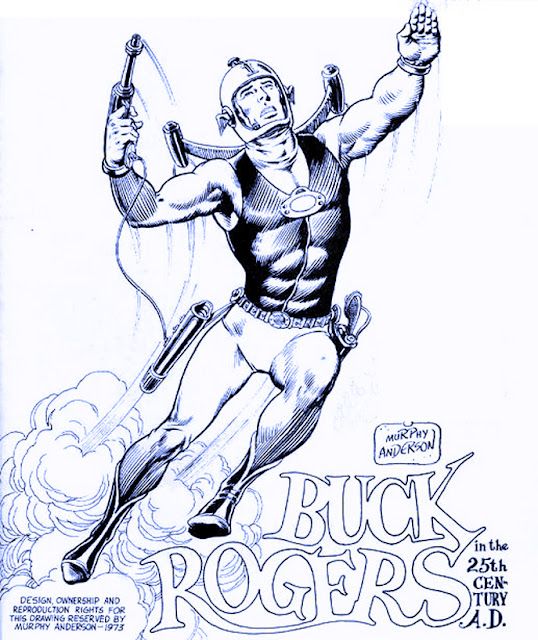 5. Perhaps the best remembered and beloved of the Anderson solo science fiction strips was Adam Strange, who debuted in Showcase #16-#18 (Nov./Dec. 1958 – March/April 1959). Mike Sekowsky drew those first Showcase issues, but when Adam Strange graduated to his own cover-feature run in Mystery in Space (#53-#92, Oct. 1959-June 1964), Carmine Infantino was given the assignment, and before long, Murphy was inking the award-winning series and would become forever associated with the character, so much so that editor Michael Uslan selected Adam and Murphy to star on the cover of Mysteries in Space: The Best of DC Science Fiction Comics (Fireside Books, 1980). 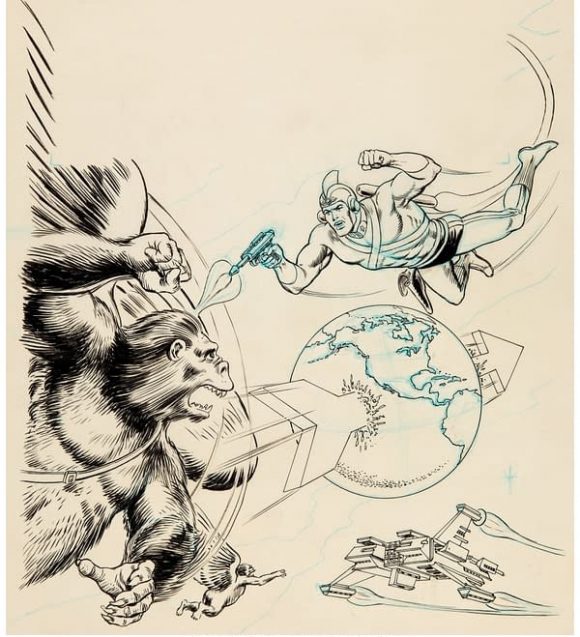 6. Another Anderson take on Adam Strange, this in the form of an undated convention sketch. 7. I didn’t spend all that much time digging into the background of this 1971 piece, but, hey, Murphy, science fiction, damsel in distress, and ray guns? Sign me up! 8. One of my favorite depictions of Edgar Rice Burroughs’ Tharks is by Murphy from this adaptation of John Carter of Mars he did in collaboration with Marv Wolfman for DC’s 1972 Edgar Rice Burroughs Weird Worlds. Unfortunately, Murphy only lasted for three installments before being pulled away by other assignments, but this piece for a 1972 convention book suggests some of the energy he brought to the strip. 9. The collaboration between Carmine Infantino and Murphy Anderson never got a cute name like “Swanderson,” but against all odds, they were one of the most popular art teams of the Silver Age. Where Carmine was sketchy and carefree in his pencils (some inkers joked that the best way to ink Carmine was to just pick a line and start), Murphy laid a firm, authoritative ink line down on the page. Their covers on the Flash during the early- to mid-1960s were exceptional, perhaps the best run (as it were) of covers in the Silver Age, including the iconic, “I’ve got the strangest feeling I’m being turned into a puppet!” cover (#133, Dec. 1962). Here’s a Murphy solo go at the Fastest Man Alive for the cover of Secret Origins Annual #2 (1988). 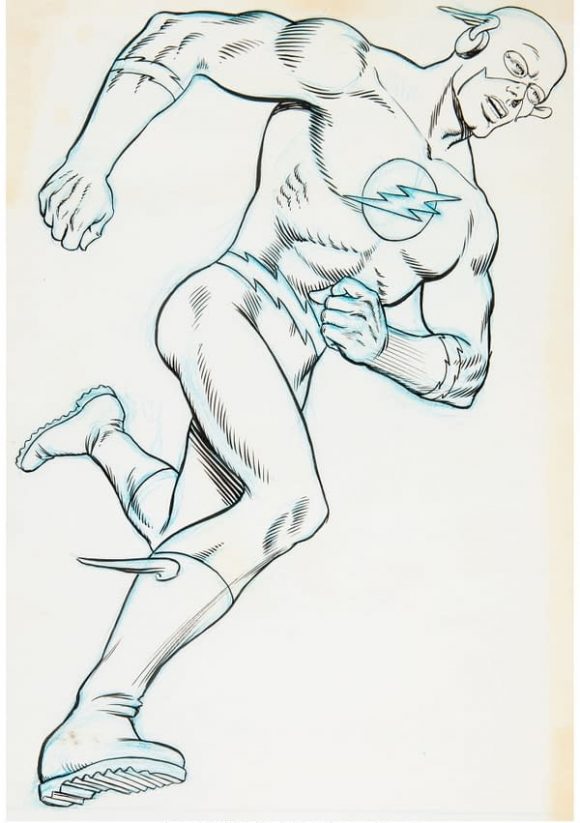 12. Assuming the artistic chores on the new monthly Hawkman title after the three-issue Brave and the Bold (#34-#36, February/March 1961 – June/July 1961) Silver Age revamp stories by Joe Kubert would be a profound act of courage for any artist. Following Joe Kubert was no easy task, even back in those relative “early” days when he’d been doing comics for about 20 years, since he was 13, and he’d have 50 more years to get even better), but I’m betting Murphy didn’t bat an eye. The seven-time Alley Award winner (between 1962 and 1965) picked up his pencil and brush and went on to leave his own imprint on the Winged Wonder every bit as enduring as Joe’s. The cover to Hawkman #3 (August/September 1964). NEXT: If you think some things never change, you don’t know Dick (Giordano)! Click here.

“No, everything doesn’t have to be Batman. We’ve been rather heavy on Batman projects, but that’s because Batman sells. He’s a character almost every writer and artist lusts after. And doing it Batman in a Prestige Format book is something everybody wants to do too. There’s more publicity, more money, more time to do the work, more people here paying attention to the material, etc. But, no, Prestige isn’t dependent on Batman, but the ones we’ve done so far that have been very successful tended to have been about characters that are in the DC Universe.”