Here’s the SUPERMAN ’55 Comic That DC Needs to Publish 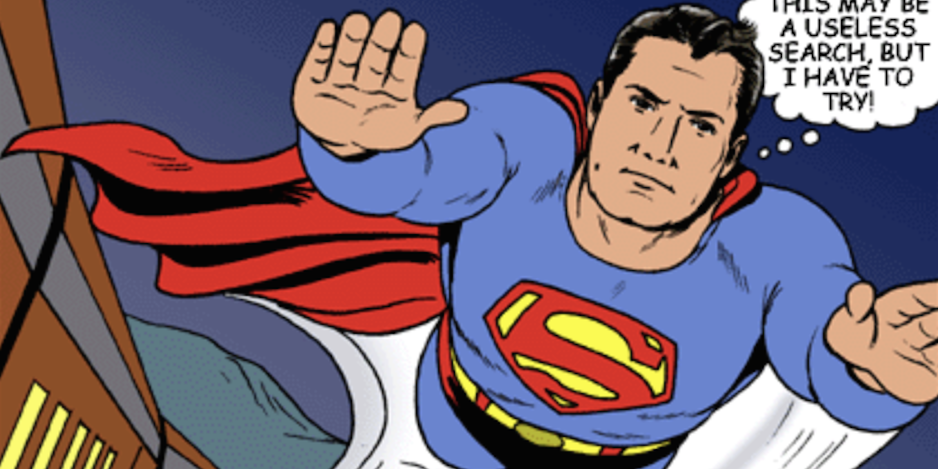 UPDATED 9/13/22: Hey, folks! This piece first ran in 2017 but we’re re-presenting it because Anthony Desiato’s fab podcast Digging for Kryptonite has a special episode up that explores this superb adaptation of the never filmed Superman and the Secret Planet. Click here to check it out. (I’m a guest, I’m proud to say.) Meanwhile, for the TOP 13 ADVENTURES OF SUPERMAN EPISODES — RANKED, click here. — Dan

DC’s done a great job the last several years publishing comics based on the classic Batman and Wonder Woman TV shows. Notable by its absence, though, is any classic Superman, whether it be the ’50s George Reeves show or the ’70s and ’80s Christopher Reeve movies. (Click here for more on that.)

Just check out this recent painting by Alex Ross that imagines a World’s Finest TV pairing: 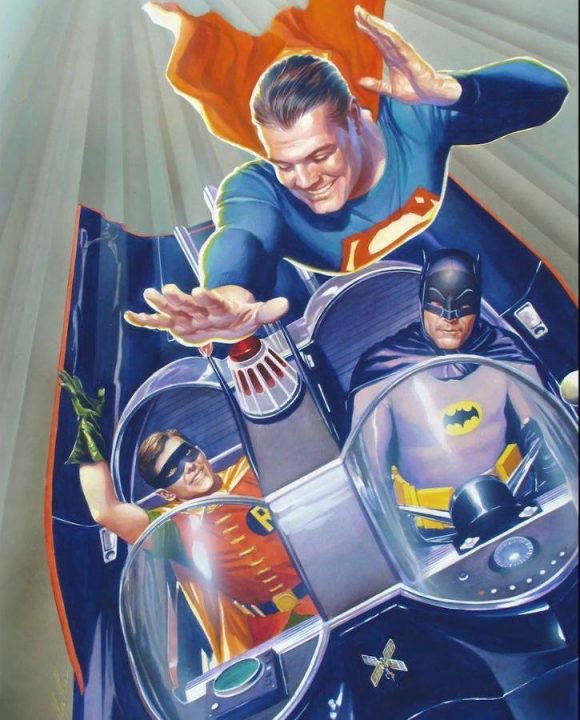 Wouldn’t that make a great cover? (And check out these others by Ross.)

An educated guess, though, is that it comes down to likeness rights. As in, DC doesn’t have them. Why the company hasn’t obtained them is open to conjecture but the bottom line is that right now, fans of the Man of Steel are out of luck.

Superfans Jim Nolt and Randy Garrett have produced their own Superman ’55 comic — and it’s been hiding in plain sight at Nolt’s The Adventures Continue website (click here).

The single, full-length issue, which you can read for free, here, is based on an unproduced 1957 movie script called Superman and the Secret Planet by David Chantler. Randy’s done a terrific job adapting it and though hardcore Reeves fans have dug it for years, it’s never gotten a wider audience.

It would be terrific if DC reassessed the Reeve (or even Reeves) situation and picked up the (super)ball.

I asked Randy, who’s a pretty humble guy, a number of questions about the project. Turns out, he once had one of the coolest jobs in graphic design:

Randy Garrett: I’ve been a graphic artist and illustrator for over 40 years, doing all sorts of work. Everything from ads for the Yellow Pages to T-shirt design and CD covers. The best job I ever had was the several years I spent working as an artist for Aladdin Industries, the folks who came up with the idea of character lunch boxes back in 1950 with the introduction of the Hopalong Cassidy lunch box.

Dan: What was the genesis of the Superman project?

Randy: I guess the project dates all the way back to 1976 with the publication of Serial to Cereal by Gary Grossman. That book was a treasure trove of new information about Adventures of Superman and George Reeves.

Mentioned in passing was an unproduced script called Superman and the Secret Planet. Just the title was mentioned, no plot summary or anything else. After reading that, I found myself sketching scenes just from my imagination, because I had no idea what the actual storyline would have been.

Years later, I was able to buy a copy of the script from a collector in Texas, and I continued sketching. They were just doodles really. I had no desire to publish a comic book, and the copyright problem would have been insurmountable anyway. During this time I was contributing drawings to Jim Nolt’s wonderful little fanzine, The Adventures Continue.

When he switched to publishing online, a comic-book version of Secret Planet became practical. Thanks to Jim’s encouragement along with that from other fans, particularly Lou Koza and Eddie Caro among others, I drew a couple of test pages. Jim posted them, the response was very positive, and I was committed at that point to making it through the whole script. It was a ton of work, but I made it, surprising even myself.

Dan: Have you ever approached DC about getting them to publish this?

Randy: No. This was just a fan effort done for the enjoyment of other George Reeves fans. A tribute to a great guy whose performance as Superman touched me in a very special way. I never thought the art style or dialog of the 1950s would hold any interest for DC. I was informed that some employees of DC were aware of my comic, enjoyed it and looked forward to each installment, but I never had any feedback from them or anyone else at DC.

Dan: With DC having produced Batman ’66 and Wonder Woman ’77, what’s your taking on why we haven’t seen a George Reeves Superman comic?

Randy: Well, there probably are a lot factors involved. The George Reeves show (hey I like that name!) was filmed so very long ago that the fan base is shrinking. Anyone old enough to remember seeing first-run episodes as a child would be in their late 60s or early 70s by now. (I’m 67. Great Caesar’s Ghost!)

Also, there seems to have been a history of DC not really promoting the TV show or George Reeves. They seemed to have viewed the show as mainly a means to promote the sale of comic books. During the production of the series, there were never any authorized Superman products using Reeves’ likeness. He finally did turn up on a set of gum cards six years after his death.

I have a friend who several years ago had the opportunity to talk to a fellow high up in the DC ranks. He mentioned George Reeves and Adventures of Superman to him, and the response from the guy was, “Nobody cares about that old stuff anymore.” That may sum up DC’s attitude fairly well, though perhaps it’s changing as indicated by the publication of the comics you mentioned.

Go hit up The Adventures Continue and read the whole comic, here.

Anthony Desiato’s Digging For Kryptonite episode can be found here. You can also find it on Apple Podcasts, Spotify, Google Podcasts and Amazon Music.