Dozens of BATMAN Greats Create the Grooviest Cape Ever

In the annals of Batdom, John Whitt is one of the best-known Batman cosplayers around. You’ve almost certainly seen him on Facebook and if not, we did this nifty little piece not long ago about his sweet encounter with inker Joe Giella, the oldest living Bat-artist.

Well, as cool as that was, we’ve got something here that’s at least as groovy, just in time for Halloween: For about a decade or so, John has gotten a Who’s Who of comics artists and Batcelebs to sketch on or sign a Bronze Age blue, life-size Batman cape. We’re talking names like Neal Adams, Adam West, Frank Miller, George Perez, Jose Luis Garcia-Lopez, Bruce Timm, Kevin Conroy, Adam Hughes, Tim Sale, Dan Jurgens, Giella and tons more.

How cool would it be to go trick-or-treating in this: 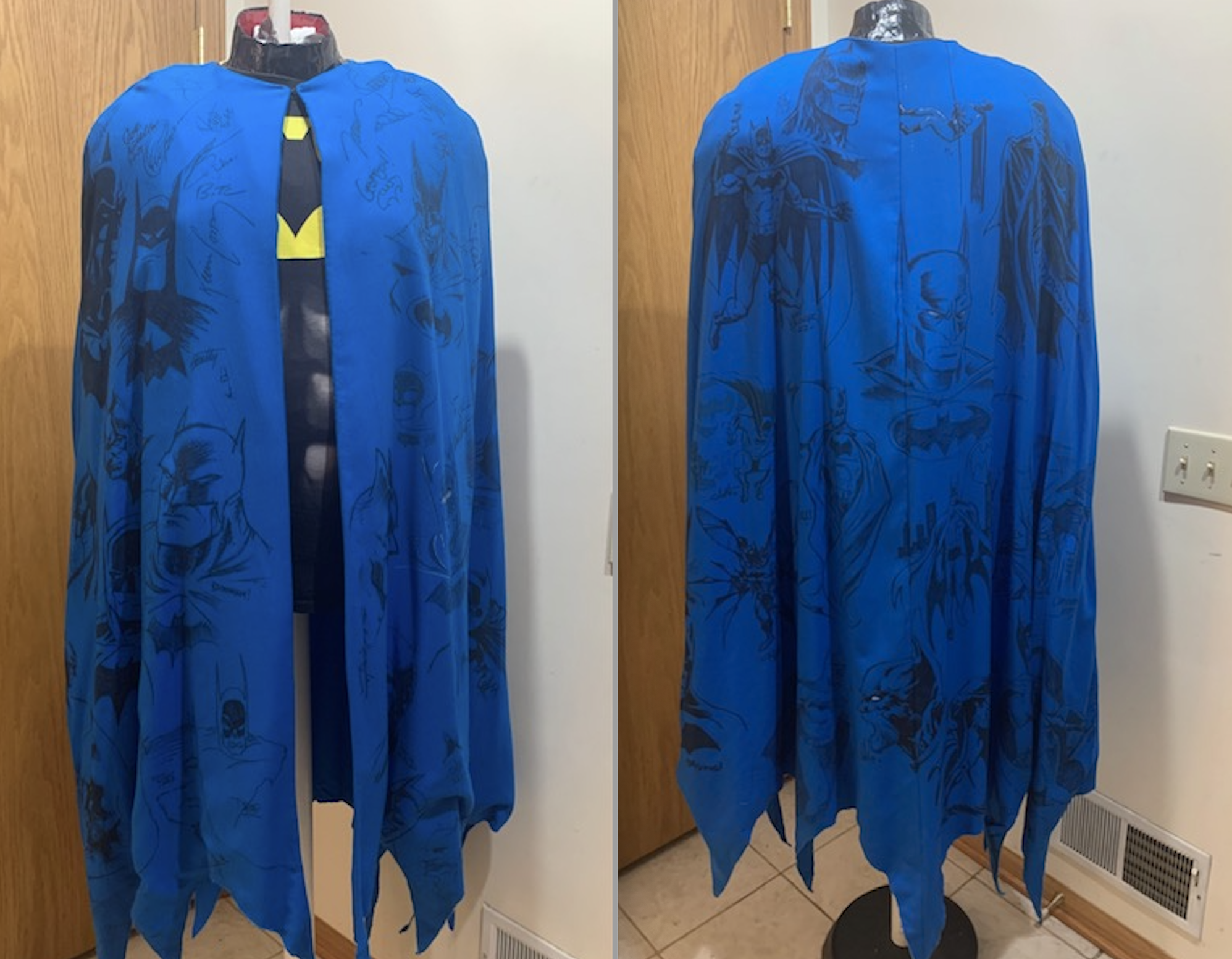 “The cape is an eight-panel (four outside and four inside), complete wrap-around cape with fitted shoulders that was going to be an actual costume cape,” John, who lives in Minnesota, said. “When I decided to go with a different material, I decided to use this one to get sketches on the front and the back.” 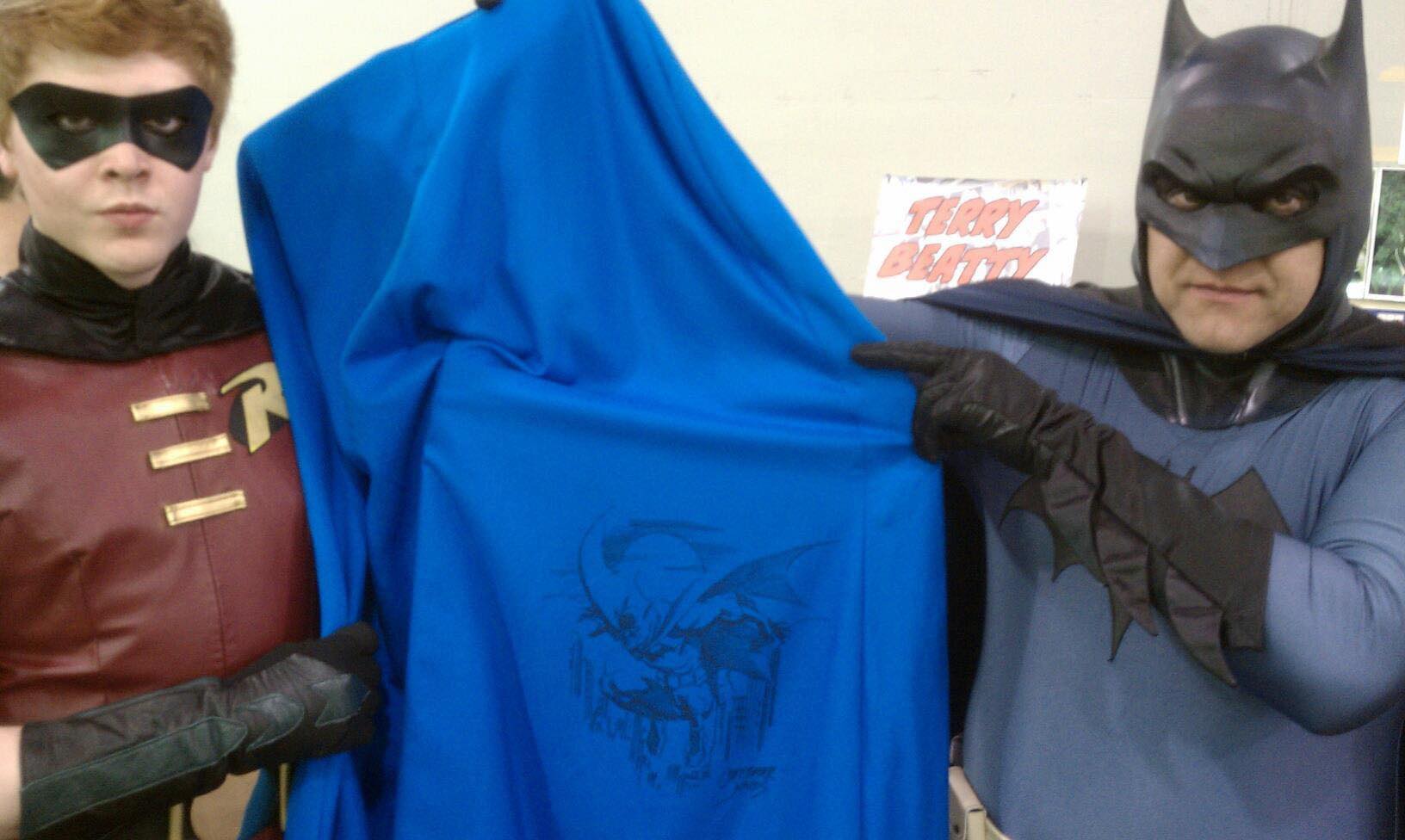 John collected the sketches and autographs by traveling to conventions around the country.

Now, you want a closer look, don’t you? Well, here’s a selection of just 13 images: 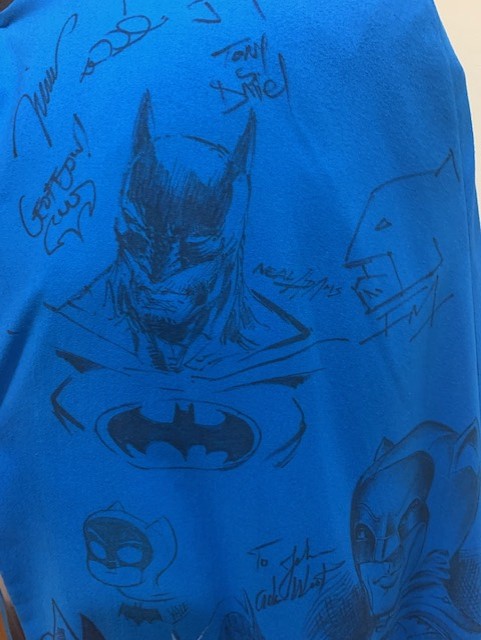 Neal Adams (with Frank Miller just to the right) 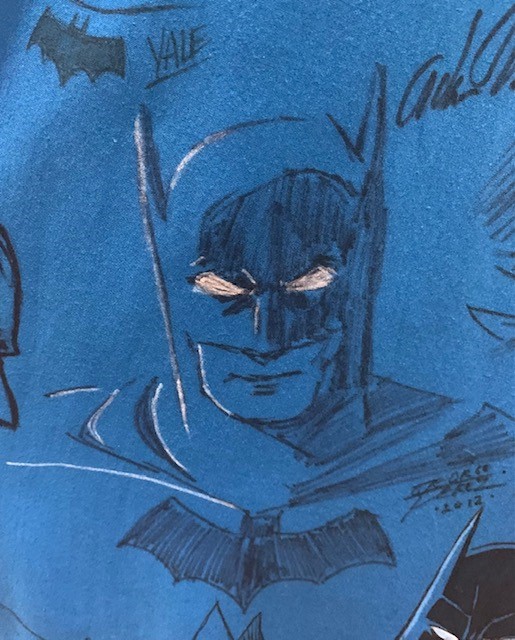 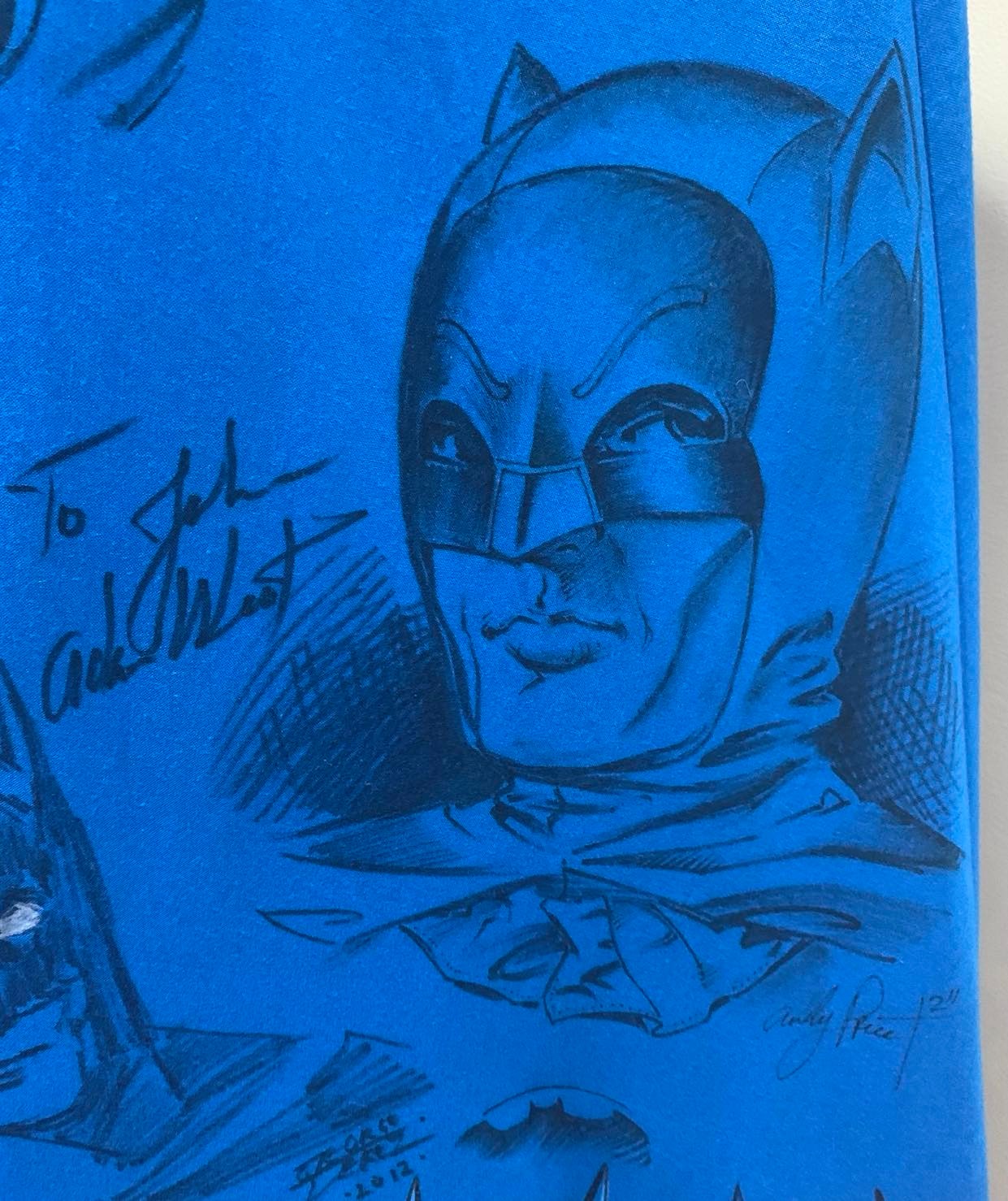 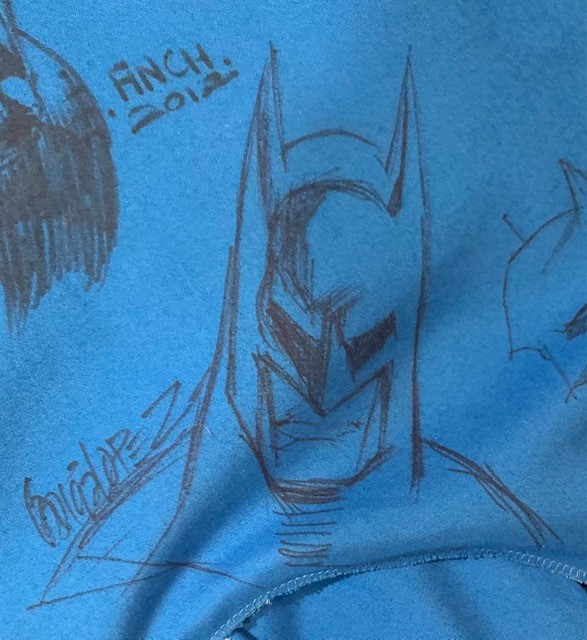 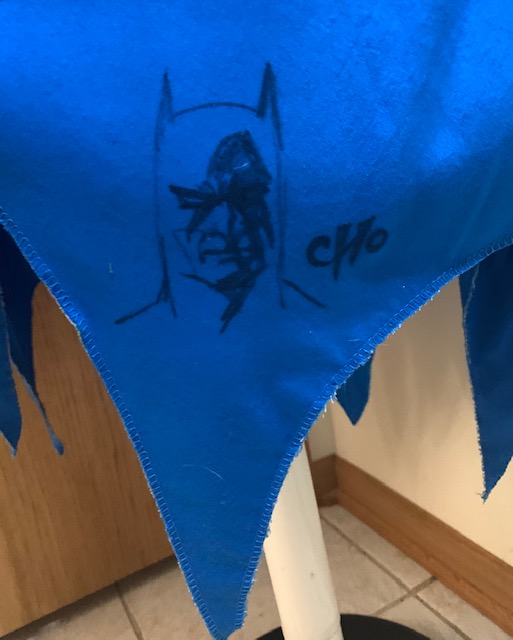 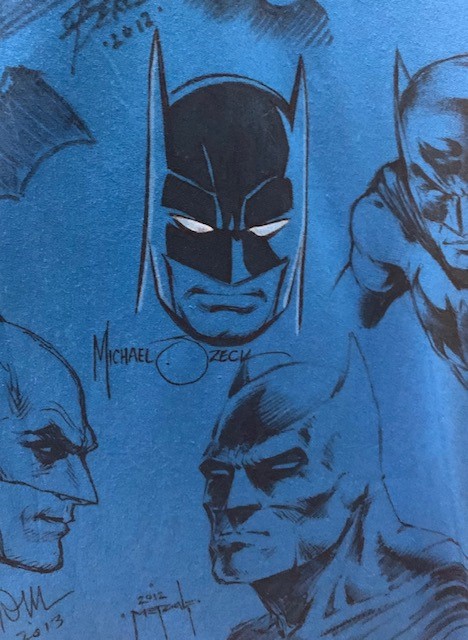 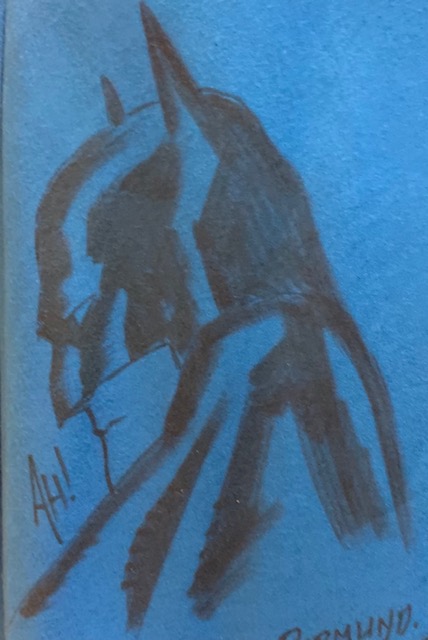 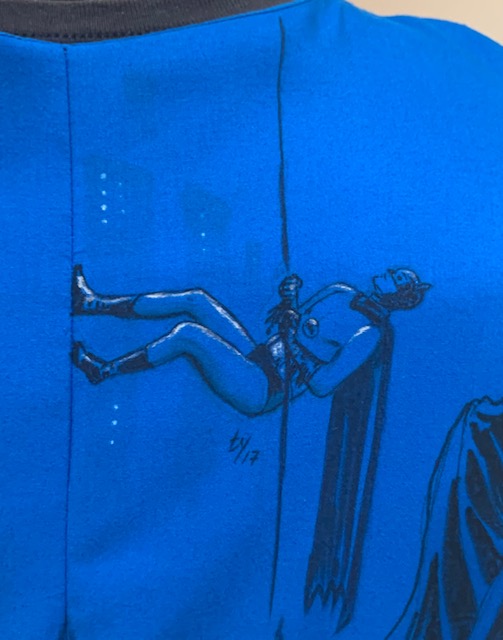 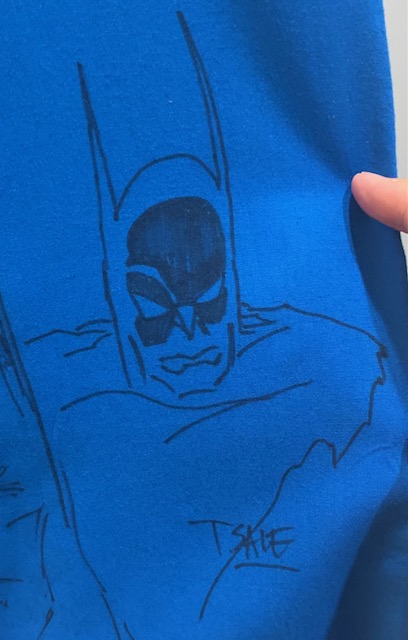 That is one helluva Bat-collectible, I gotta say.

No wonder so many artists — like Garcia-Lopez — enjoy posing with it: 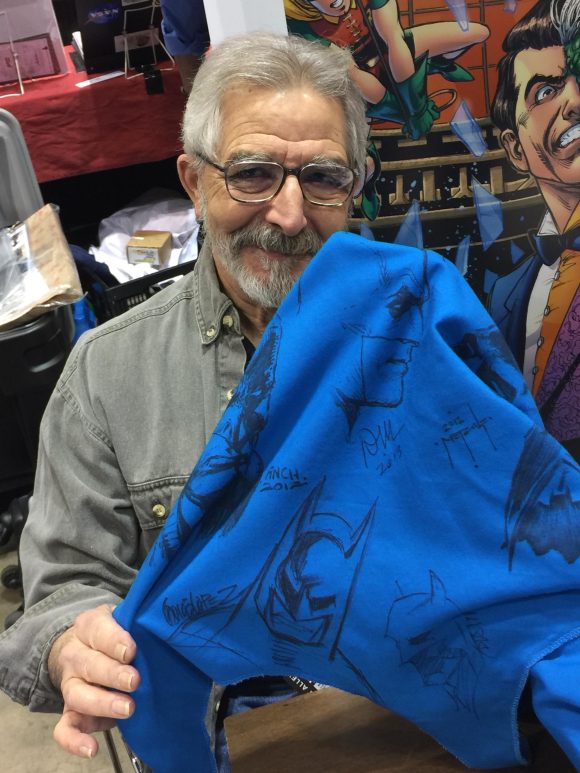 So what’s it like to own such a thing?

“It’s really cool except when you give the bag it’s in to a friend to carry it and he loses it!” John said, referring to a panicked incident in Chicago one year. “I had my friend carry it at C2E2 and when we went to lunch, he put it on a chair tucked under the table. We walked off and left it!”

Luckily, the Batgods were smiling that day.