UPDATED 7/4/20: TwoMorrows, our favorite publisher of comics history books and mags — such as Back Issue, Alter Ego and RetroFan — has been hit hard by the coronavirus pandemic. So here’s your chance to help keep their lights on — for real — and entertain yourself in the process: Pick up one of their terrific books, like Michael Eury’s Hero-A-Go-Go! We serialized the book when it came out in 2017 and throughout this summer, we’ll be running some of those segments again to whet your appetite — especially ones like these that recall the carefree days without social distancing and lockdowns. Hero-A-Go-Go! is one of my personal faves and you can click here to order it, directly from TwoMorrows. Dig it. — Dan

As a kid, sometimes the ads in comics were as captivating as the stories themselves, especially when you’d be reading through back issues — which for me generally meant the Batman comics of the ’60s. You’d come across things that were no longer available, making that desire to have that thing that much richer.

Paging through those issues, I’d inevitably come across an ad for Palisades Park featuring Superman or Batman (or Wonder Woman). 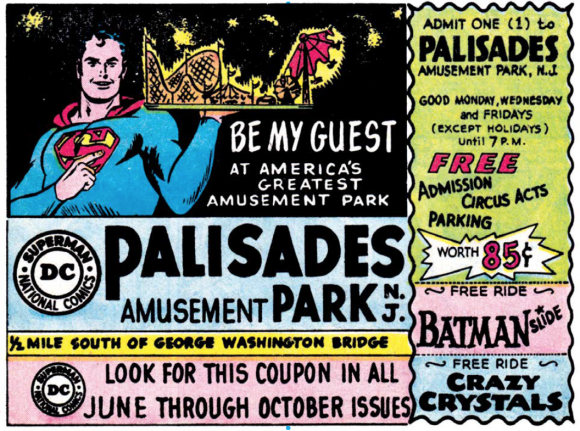 Come on, an amusement park featuring Batman and Superman? That’s a special corner of nirvana right there. Thing is, I didn’t really understand that it was less than an hour away from where we lived in New Jersey. Not that it mattered: By the time these ads pulled me under their sway, it had closed down anyway.

Taking all that in, I’ve looked at those ads with a certain wistfulness. If I’d been born five years earlier, I almost certainly would have made it there. At least I like to think so, though maybe my Mom would argue that the Asbury Park boardwalk was a lot closer.

Anyway, I was really pleased that Michael Eury decided to feature Palisades Park in Hero-A-Go-Go! and there was no way I wasn’t going to pick off an excerpt to share here. 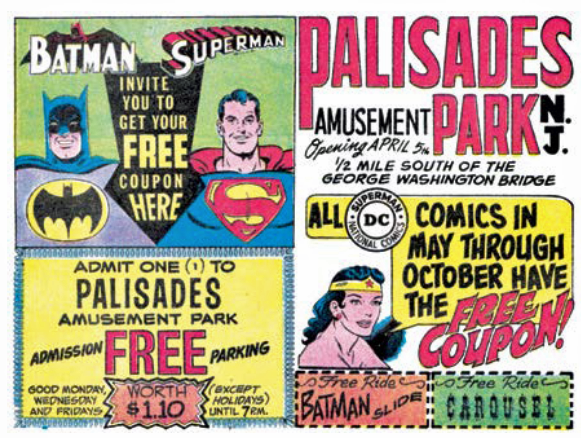 Here’s a truncated Q&A with Vince Gargiulo, the park’s most prominent historian and operator of PalisadesPark.com.

Oh, and enjoy a couple of videos as well — including one that Batman collectibles maven Art Cloos found on YouTube.

Michael Eury: Since Superman was Palisades Park’s pitchman in DC Comics throughout the Sixties, did an actor dressed as Superman ever appear at the park?

Vince Gargiulo: I don’t believe anyone ever appeared at Palisades as a Superman costumed character. George Reeves did, however, make a personal appearance. I do not have an exact date as to when this occurred.

Michael: Were there marketing studies conducted to show how many attendees were drawn to the park from outside of the New York metro area by the ads published in comic books?

Vince: None that I am aware of. But based on published newspaper articles throughout the lifetime of the park, I was able to calculate that 33% of the visitors to Palisades were from New York.

Michael: The Batman Slide was built in the mid-Sixties. Do you know exactly when? I’m assuming it was in response to the overnight success of TV’s Batman, which first aired in January 1966.

Vince: The first mention I found of the Batman Slide in news articles was from March 1966.

Michael: What Batman-isms were featured on the Batman Slide?

Vince: At the very top of the tower was a large cutout of the comic-book Batman. Below that was a sign that read “Batman Slide,” with a version of the Batman logo in the background. I do not believe they ever included Robin’s image anywhere on the attraction.

Michael: Was the Batman Slide still in operation when the park closed in 1971?

Vince: Yes, the Batman Slide was in operation right up until September 12, 1971. It was sold to Adventurers Inn in Queens, N.Y.

Michael: There was also a Batcave amusement there around the same time. What was it?

Vince: It was nothing more than a simple barrel that rotated while patrons tried to make it from one end to the other. The park already had one of these in their fun house. But I guess they decided to install this one with the Batman theme and ride the wave of popularity.

Michael: While Superman, Batman, Casper, and Archie had some type of Palisades Park presence, Spider-Man and Captain America were noticeably absent. Were there ever any gestures made to Marvel Comics about an attraction featuring one of its heroes?

Vince: None that I am aware of.

Michael: Although it’s been nearly a half-century since Palisades Amusement Park closed, it maintains a warm spot in the hearts of many. What was it about the park that has made its legacy endure?

NEXT: Open Channel D — A Salute to The MAN FROM UNCLE. Click here.