Darwyn Cooke’s friends, colleagues and fans remember the artist and reflect on his legacy.

I asked a number of comic-book professionals to pick their favorite Darwyn Cooke works, whether it be a cover, illustration, page, what have you. Some of the responses were lengthy, some brief, all of them heartfelt.

Darwyn’s New Frontier was released during my freshman year of college. I hated being at college that first year, feeling lonely and kind of lost, but going to the local comic shop helped. The store had a teaser poster in the window for New Frontier that fall before it hit, the one with all the hands in the air and Hal Jordan’s
white-gloved hand reaching up for the Lantern ring. 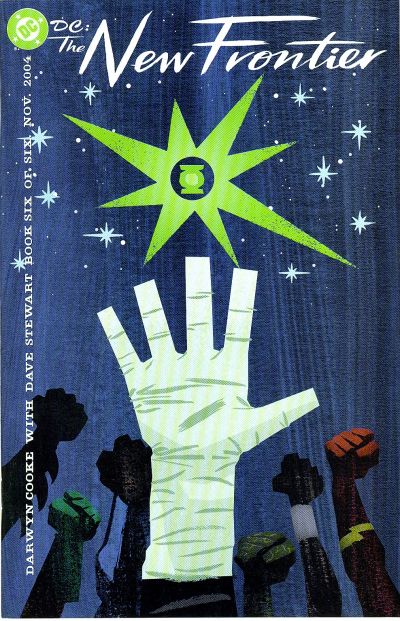 The design and style of it hooked me immediately. I had to have this book. I drew a little but it was mostly for my own enjoyment, and it didn’t resemble what I do now even remotely. I never even considered working in superhero comics, because most of what I saw in those books at the time was not a style I ever saw myself working in. But then here’s this teaser for something that looked kind of retro, rough, but FUN.

I didn’t know anything about Darwyn. All I saw was this image and that it must have something to do with the Justice League. I don’t know if I’ve ever been so excited for a book to come out. I picked up each issue as it came out, and read them immediately. It was the first book that told me I didn’t have to draw like everybody else to work in superhero comics. I can say without reservation that the book changed my life, and that I wouldn’t be doing what I am today without it.

New Frontier is FULL of pages that knocked me flat back then, both as a reader and a wannabe cartoonist. The way it’s put together, with nearly every page being a simple layout of three horizontal panels or a splash, every page is bold and stirring. Looking through the collection right now I could easily pick another 20 pages that affected me immensely. But the one that really got me and has stuck with me in the years since is this page near the end of the last issue. 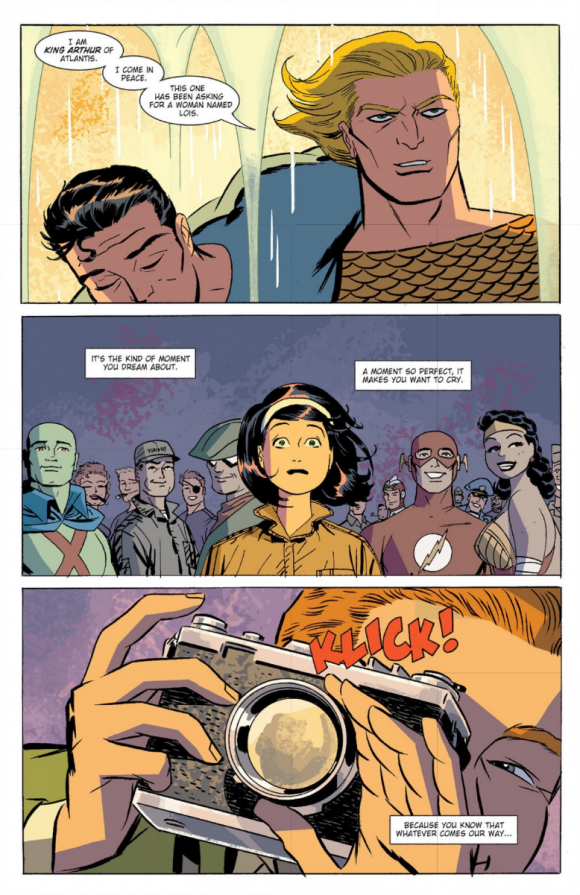 The heroes have won the day, and suddenly a ship surfaces nearby. Aquaman emerges and brings Superman back to Lois, and her reaction in particular is one of my favorite drawings ever. Additionally, with the faces of everyone surrounding her, I was floored. The following page is a favorite as well, showing us Jimmy’s photo from that last panel, as everyone celebrates.

This book means so much to me, I could go on about it all day. I love all of Darwyn’s work, but it’s tough to beat the first time I was introduced to it.

Selina’s Big Score. Just because it was the baddest, balls-out, heist movie ever to grace a comic book. We learned about Selina Kyle as a person and for me, because of this book, I began to love the character Catwoman. 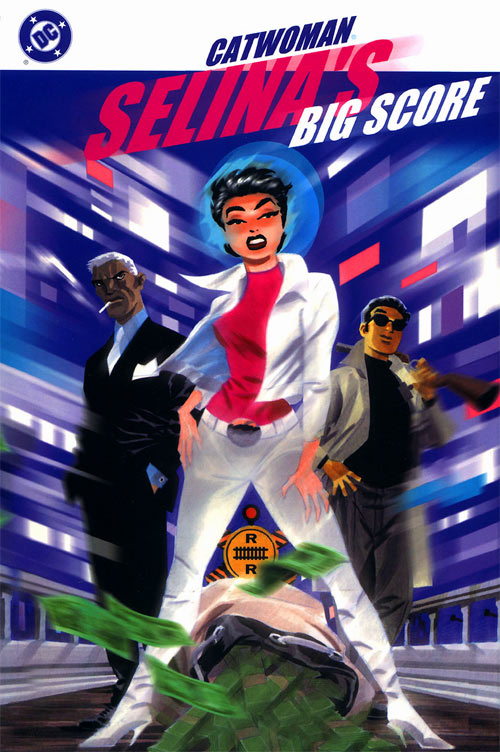 Darwyn Cooke: The most influential comic book artist of the last 15 years. 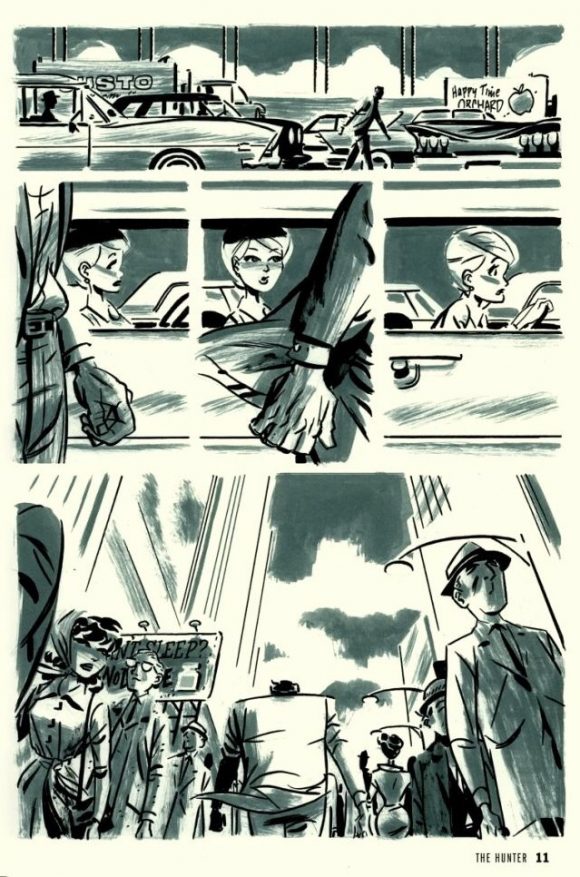 It’s rough-edged and raw. I also love how Darwyn wasn’t afraid to simplify and exaggerate even in a “realistic” story. He seemed to be a fearless cartoonist at heart.

I like the way the buildings in the last panel are barely suggested. He proved over and over that rendering and fussy details just aren’t important in comic art. A stark, bold idea — clearly stated — works every time.

I really admired his Spirit.

Darwyn went where a lot of artists are afraid to go: Eisner territory.

The amazing thing about his take on the Spirit is he didn’t ape Eisner. Like Wally Wood before him, he made it his own. 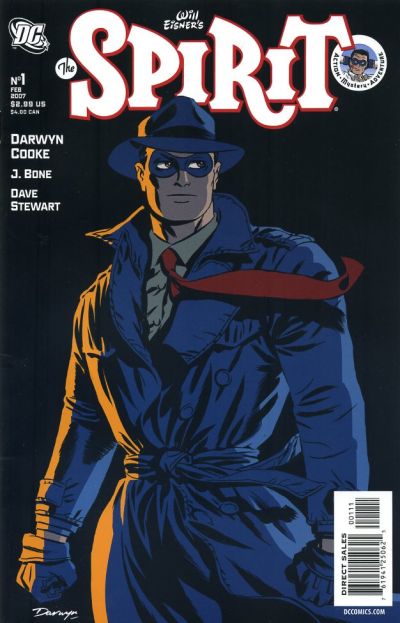 Darwyn infused his with humor in the drawing, and it worked wonderfully, adding a dimension heretofore not used that much with the Spirit. He was able to mine fresh material in that direction with out losing an iota of what made Denny Colt awesome… gotta be good to do that.

New Frontier is one of my favorite books of all time, for its deep sense of hopefulness and wonder even when the world it depicts grows dark. Darwyn was a friend too and I’ll miss him a lot. He and his tight group of friends were some of the first people to really welcome me into the industry and I’ll always be very grateful to Darwyn for his openness and his generous spirit. Truly one of the greats in every way. 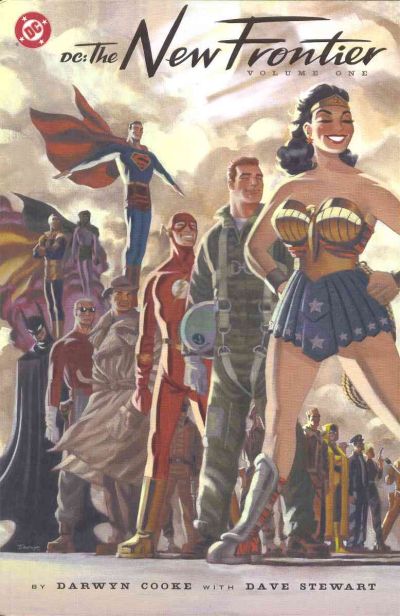 I don’t have a favorite single piece of Darwyn’s because I was a Darwyn Cooke fan. I have most of his published work, including New Frontier in single issues as well as the Absolute Edition. I have all of the Parker graphic novels, his Catwoman run. If I were to pick a single moment where I said to myself “he gets it,” it would probably be his cover for Solo. Simple, and elegant. 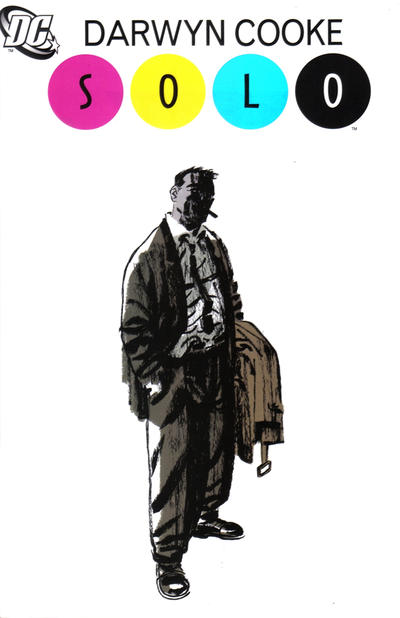 Choose any page from the Parker series as a master class in making more out of less. I hope I can someday achieve a fraction of the energy and impact Darwyn Cooke could wring from a few black lines and a blue tone. 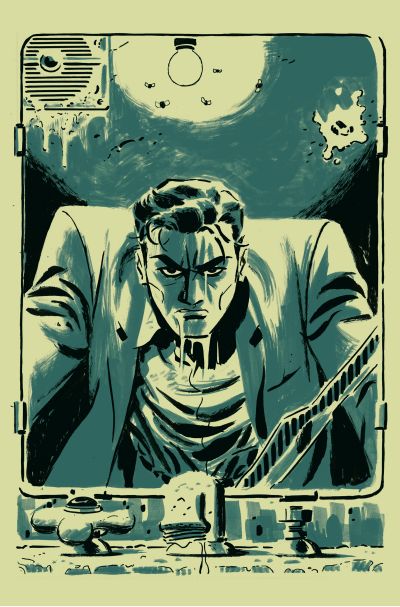 All of the images from Darwyn Cooke’s Variant Cover Month were a wonder to behold, elegantly capturing the characters across the DC Universe.

But the one that stands out to me is the cover to Detective Comics #37. It does what Darwyn did so well: capturing something so iconic about these characters, in a charming depiction of a moment in their lives. This simple image illustrates Batman and Alfred’s relationship perfectly. 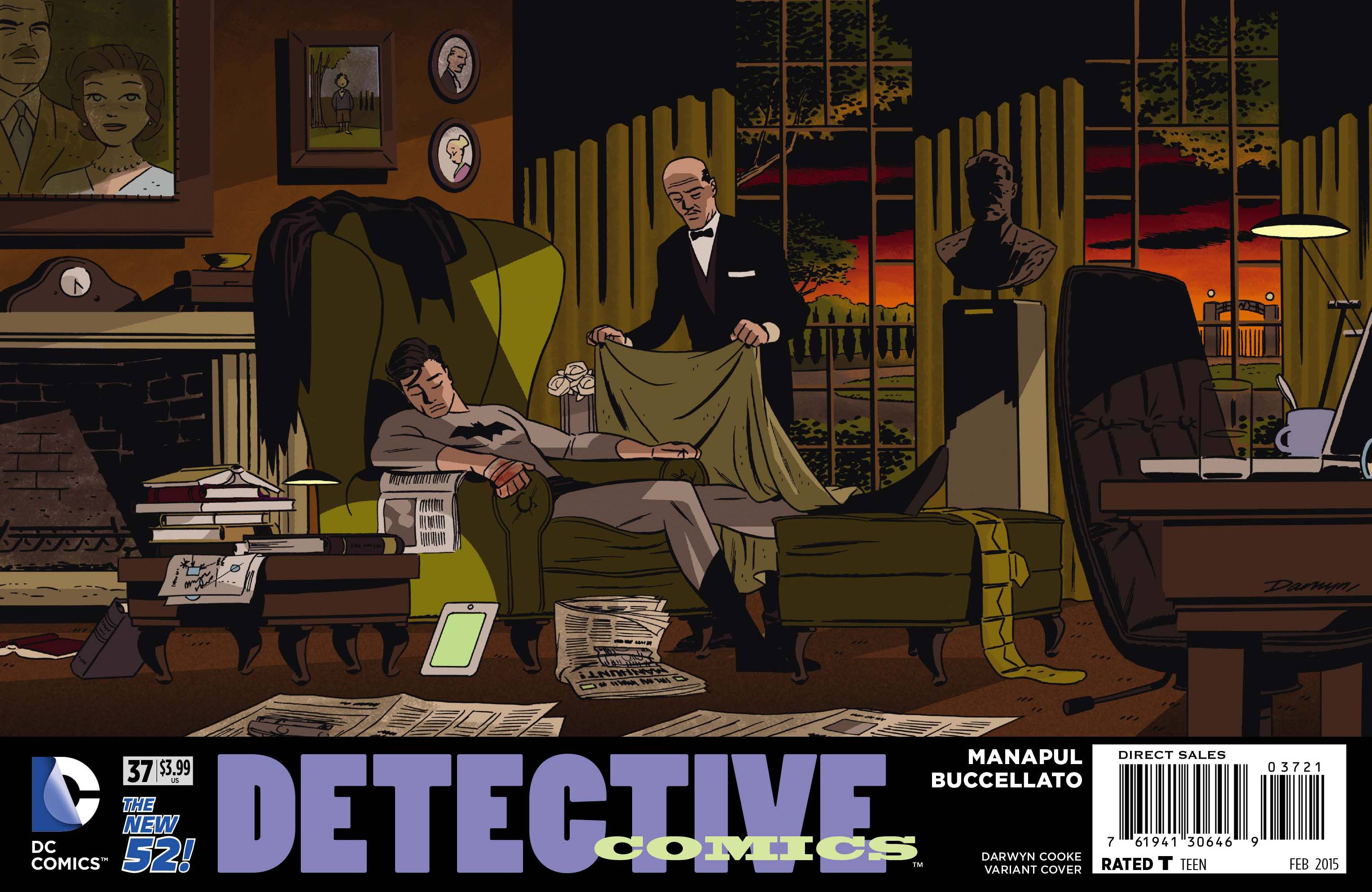 The skill on display here is also breathtaking. You get a sense of Bruce’s weariness and Alfred’s concern — telling a complete story without a word of dialogue. And the most incredible thing of all, is that Darwyn made it look so easy. Each line is imbued with a sense of emotion, character and weight.

He was a dynamic force in this industry. His graceful presence will be missed. But his legacy lives on — inspiring us for generations to come. Of that, I have no doubt.

This cover will always be my favorite Darwyn Cooke cover. Not just for the fact it’s composed beautifully, or for its cool, mid-century modern aesthetic. This issue was the first time I realized that you could do a comic cover that didn’t have to be an action-packed splash page.  It showed me that you can say a lot with out showing a lot. That idea was a huge influence on me when I was at the very beginning of my graphic-design career. It still is today.

The first time I ever talked to Darwyn was on my 33rd birthday. It was on Eighth Avenue and 40th Street, in front of a McDonalds that was (is?) below Midtown Comics in Manhattan. He was there for a big Speakeasy Comics signing, and as someone who, at the time, was about to publish a comic through them, I felt that although my allegiance was (and will always be) to Jim Hanley’s Universe, I should show my support. But more importantly, my favorite comic creator was going to be there.

I went in, and he had a line, as you can imagine, and I just…what do I say? I walked out, went to the payphone (what is that?) made a call to my then-girlfriend, talked a bit and then looked to my left. Darwyn had come down to have a smoke. “I have to go,” I said. I hung up, went over, introduced myself, and he looked…wary. I mean, who wouldn’t be? You’re in NYC, you’re from Canada where everyone is naturally nice, and some bald lumbering jerk from the City just approached you. But I congratulated him on his Harvey and Eisner nods. He thanked me, and we mentioned our mutual friends. It was short, it was nice. It was a birthday gift to myself.

That would have been 10 years ago next month.

The last time I saw Darwyn was at last year’s Baltimore Comic Con. He and I had been playing this game of cat and mouse, in a way. I asked him to do a cover for Stray, he agreed, and although he was busy with Slayground at the time, he emailed me this: “BTW, shoot me a jpeg of the Mustang. I love to draw Mustangs.”

So at the con, we caught up and I praised him for his speech about Russ Heath (he had presented Russ with the Hero Initiative Lifetime Achievement Award…the speech was an instant classic and if you weren’t in the room…sorry, not sorry). He came by our table for Hang Dai Studios the next day and I gave him a copy of the Stray trade paperback, which prompted him to say, “I guess I have to draw him now, huh?”

The times I spent with Darwyn, in his company or in his presence, were too few, and too far between, but they meant the world to me. I have no words to truly express what his loss means to me. I can only think of all of our times together, laughing, sharing a drink, talking about anything but comics. He was just…this is so stupid, but he was just a cool guy to be around. He had that old-school mystique, and I’m not sure if it was natural or cultivated, but who cares, really? That was Darwyn, and that’s what made being around him a blast. Even if, in this weirdo Ocean’s 11 world…even if that made me Joey Bishop (but, more likely, an extra in the background). 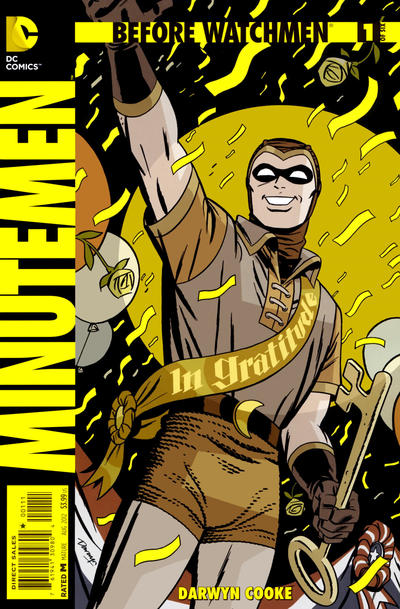 “You come into this world, and your point of view is narrow. If you’re lucky, it’s a safe and loving place. As you grow, your view of the world broadens and you struggle to find your place within it. If you’re strong, you learn to survive it. Over time you may not decipher the mysteries of the universe, but you can make your peace with that and find strength in what you know to be true. If you’re wise enough to approach this seeming impasse with humility, you may even find a sustained happiness.”

Darwyn wrote this on the first page of the first issue of the Before Watchmen: Minutemen miniseries. And wow, that is just an incredible piece of writing. I just happened to grab this issue off of my shelf, right before I sat down and immediately after reading it, I thought, “If those were his last words (to me), then those are some great last words.”

I am not “worthy” of being asked to remember Darwyn. There are many more that were closer to him. But what I know about Darwyn is… he’d be cool with it. He and I got on as pals do. I had his back. He had mine. That’s all there is to it.

This page, from DC: The New Frontier, kind of encapsulates everything about Darwyn Cooke, the man and the artist, to me. 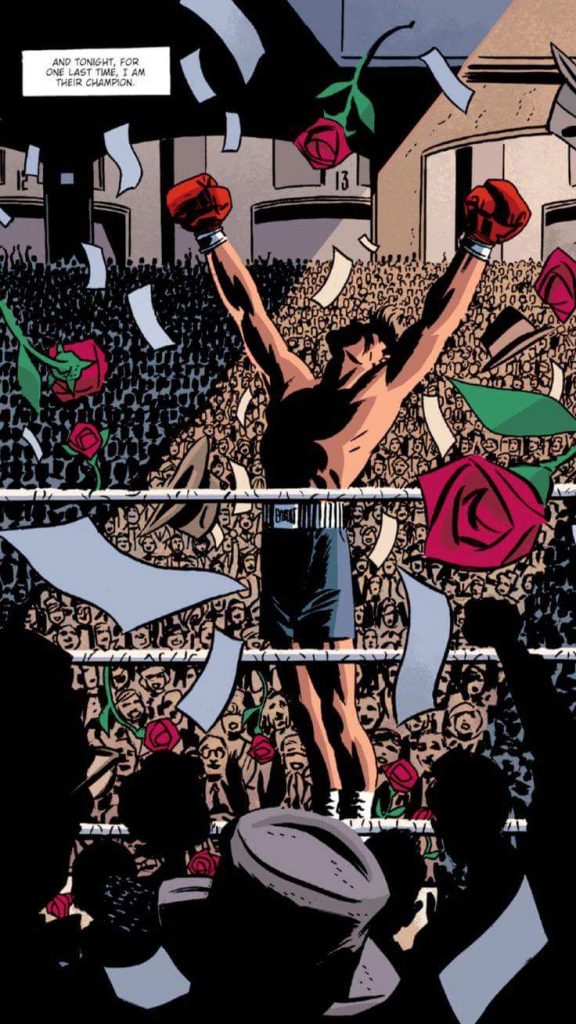 They say, “Brevity is the soul of wit.” With Darwyn, it can be paraphrased to, “Clarity is the soul of storytelling.” There is such a clear story in New Frontier, and this moment of victory, about a guy on his way out about to fight the kid who would become the greatest boxer of all time, this is Darwyn to me. Not an underdog. The guy with the left hook you never saw coming. Darwyn, in sports parlance, goes out as the undefeated champion of the form. Like Kirby before him, there will never be another.