SHATNER TURNS 91: Captain on the bridge…

13th Dimension contributor Scott Tipton and his brother, David, have written many of the best-received Star Trek comics for IDW — so they certainly know of which they speak. Check out their terrific list of 13 GREAT CAPTAIN KIRK MOMENTS. — Dan 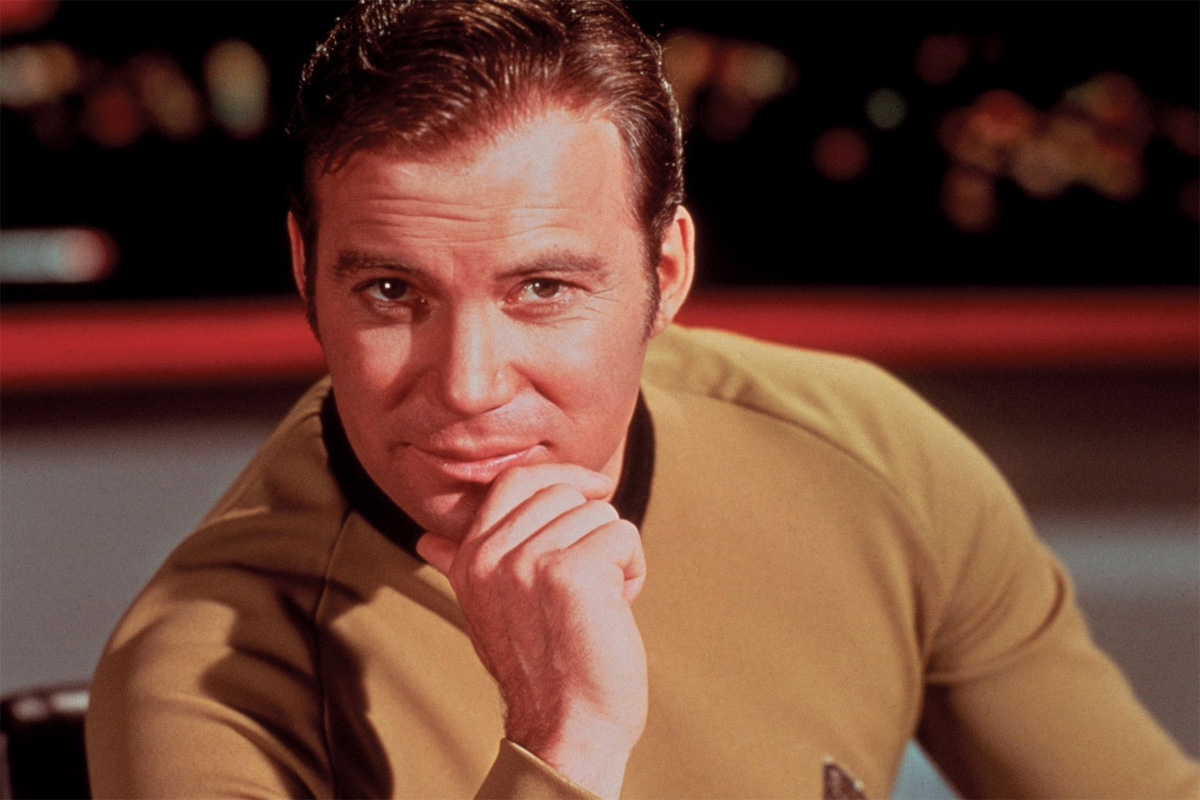 By SCOTT TIPTON and DAVID TIPTON

Soldier. Explorer. Diplomat. When it comes to Star Trek commanding officers, there’s Captain James Tiberius Kirk and then there’s everybody else.

Here are 13 reasons why:

Outclassed and out of his depth when going hand-to-hand with genetically enhanced superman Khan Noonien Singh, Captain Kirk tries his usual array of Kirk Fu fighting moves, to no avail, and eventually has to resort to something a little more direct: the warp-engine equivalent of a monkey wrench.

Sometimes you do what it takes to get the job done.

When Kirk realizes that both his crew and their Klingon foes are being manipulated by some sort of creature that feeds on their hostility, he forces himself to put his anger aside and convince the Klingons to lay down their arms and come together in good will, leading to that rarest of sounds: a Klingon belly laugh. 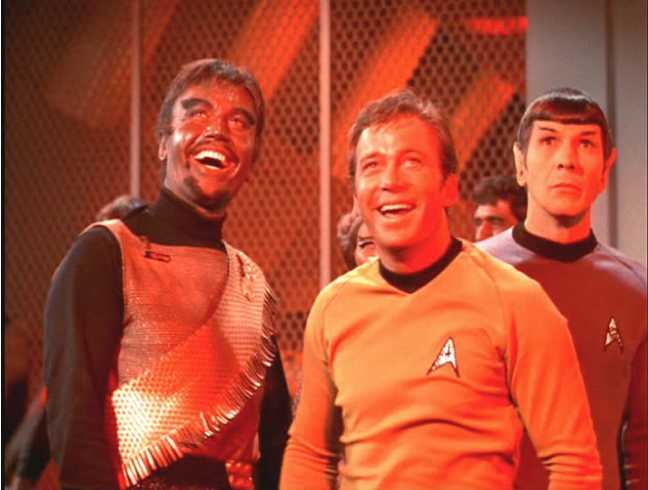 There’s Kirk as commander, Kirk as negotiator, but we’ve always loved Kirk the trickster, when he talks or bluffs his way out of situations, such as here, where Kirk introduces his gangster captor to the intricacies of the card game “Fizzbin.” (And look at the way McCoy leaps into the fray with that karate chop at the end!)

If there was one thing Captain Kirk was especially good at, it was talking to computers until they blew themselves up. Whether it was Daystrom’s M-5, Norman the android, or Landru, give Kirk a few minutes alone with it and pretty soon it’ll be melting circuit boards all over the place out of sheer logic. The best of these comes in The Changeling, when Kirk reduces the powerful sentient space probe Nomad to little more than a blithering idiot.

What, you can’t make a functioning cannon out of bamboo, rocks and vines while being pursued by a furious boulder-throwing Gorn commander? That’s because you’re not James T. Kirk. 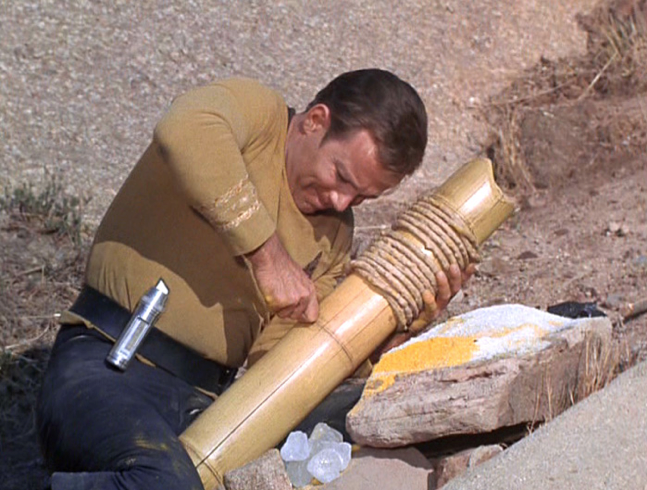 When Captain Kirk is temporarily relieved of command after being artificially aged and declared unfit for duty, command of the Enterprise falls to a bumbling commodore with no real experience in the big chair, who in no time tries to take a short cut through the Neutral Zone and winds up surrounded by Romulans. Once rejuvenated, Kirk handles the problem in a matter of moments by busting out the old “corbomite maneuver,” a bit of razzle-dazzle bluff we’d already seen him utilize in the previous season. It’s great to be smart and brave, but there’s something to be said for experience. Everyone talks about Kirk as a ladies’ man, but we really get to see him as a charmer on his dinner date with Dr. Gillian Taylor, when he’s trying to talk her into handing over her whales to a crazy spaceman from the future. Not only does he get the whales, but she picks up the check! Now that’s smooth. 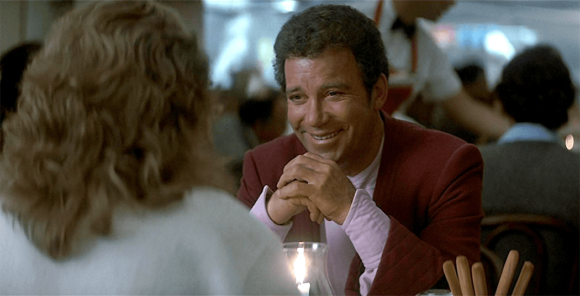 8. Half-Breed! “What Are Little Girls Made Of?”

You’ve had better days as captain. A routine trip to find your head nurse’s long-lost fiancé has turned into a nightmare of insane scientists and killer androids, and next thing you know you’ve been strapped to a turntable so they can make an android double of you, copying your mind so as to take over your ship. But you’re James T. Kirk, so you make sure to fill your mind full of uncharacteristic, racist hate for your Vulcan first officer, so he’ll immediately know it’s not really you. There aren’t commendations for thinking on your feet, but goddammit, there ought to be. 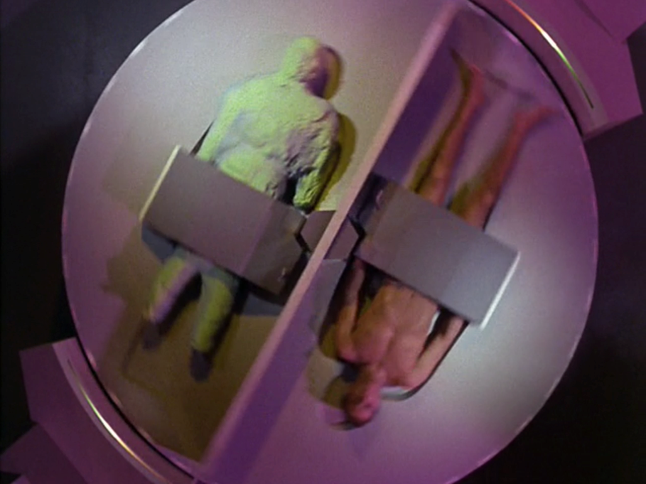 9. The Superior Intellect, “Star Trek II: The Wrath of Khan.”

When Kirk has to get Khan to follow him into the Mutara Nebula so that his wounded Enterprise will have a fighting chance against the Reliant, it’s just a little bit of goading on Kirk’s part that cuts to Khan’s ego like a knife: “I’m laughing at the superior intellect.” Know your enemy.

10. Nerves of Steel, “Let That Be Your Last Battlefield.”

When Commissioner Bele commandeers control of the Enterprise, Kirk engages him in a high-stakes battle of will over control of the ship. Kirk is calm and collected as he activates the ship’s self-destruct protocol, ultimately forcing Bele to relinquish his mental control over the ship or risk the death of everyone on board. It might seem like a bluff, but Scotty’s grim affirmation of the countdown authorization certainly suggests that Kirk was willing to destroy the ship rather than let it fall under Bele’s control. The voice authorization sequence in “Let That Be Your Last Battlefield” was dramatic and influential, and emulated in later scenes of Trek, most notably Star Trek III: “Begin 30-second countdown. Code zero-zero-zero-destruct-zero.” 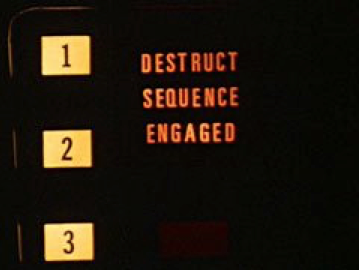 11. Smart-aleck, “The Trouble with Tribbles”

Kirk has little tolerance for incompetent bureaucrats, and in The Trouble with Tribbles his frustration with Federation official Nilz Baris prompts a series of sharp retorts from Kirk. When Baris prompts Deep Space Station K7 to issue a Priority One distress call, misusing the Priority One channels, Kirk is livid and lets Baris know: “I have never questioned the orders or the intelligence of any representative of the Federation. Until now.” 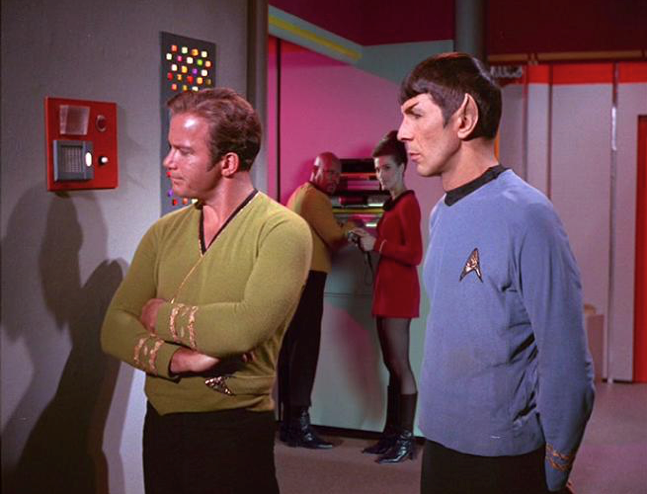 12. The Kruge Kick, “Star Trek III: The Search for Spock”

After a long confrontation with Klingon Commander Kruge, finally Kirk has had enough of his Klingon opponent. And when he’s had enough, he’s definitely had enough, expressed by a series of boot kicks to the head. 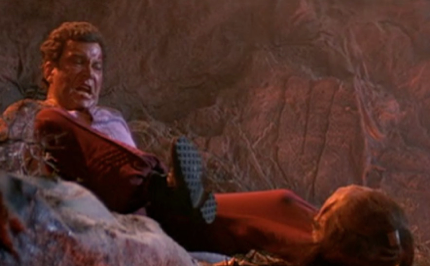 13. The Lincoln Connection, “The Savage Curtain”

Besides, he fought alongside Lincoln! Scott Tipton and David Tipton have written for nearly every iteration of Star Trek in their work for IDW Publishing, including the best-selling Star Trek/Doctor Who: Assimilation Squared and the critically acclaimed Star Trek/Planet of the Apes: The Primate Directive.