A transcendent moment in a film that deserves more respect…

To check out Rob’s piece on The Wrath of Khan, click here. For The Voyage Home, click here.

Star Trek II: The Wrath of Khan exceeded the expectations of everyone involved: the studio, the filmmakers and the audience.

But the person who came away the most surprised was Leonard Nimoy, who initially saw his death scene as a way to gracefully say goodbye to a franchise that he was sure had run its course. But after seeing just how well Wrath of Khan was received, he changed his mind and realized he wanted to stick around. With any follow-up story naturally focusing on the Spock character, he saw this as an opportunity to flex some creative muscle. Not only would he return in Star Trek III as Spock, he would boldly go where no Star Trek actor had gone before: behind the camera.

With so many story threads left dangling after Wrath of Khan, it was a relatively easy job for producer Harve Bennett to craft a new story, one that would find the Federation now dealing with the “galactic controversy” that is the Genesis Planet. Using a discarded story idea from the earlier film, Kirk and his crew would become outlaws, defying their superior officers and stealing the Enterprise to go recover the remains of their Vulcan pal and reunite him with his soul. At the same time, the Klingons get involved, led by the ruthless Commander Kruge (Christopher Lloyd). 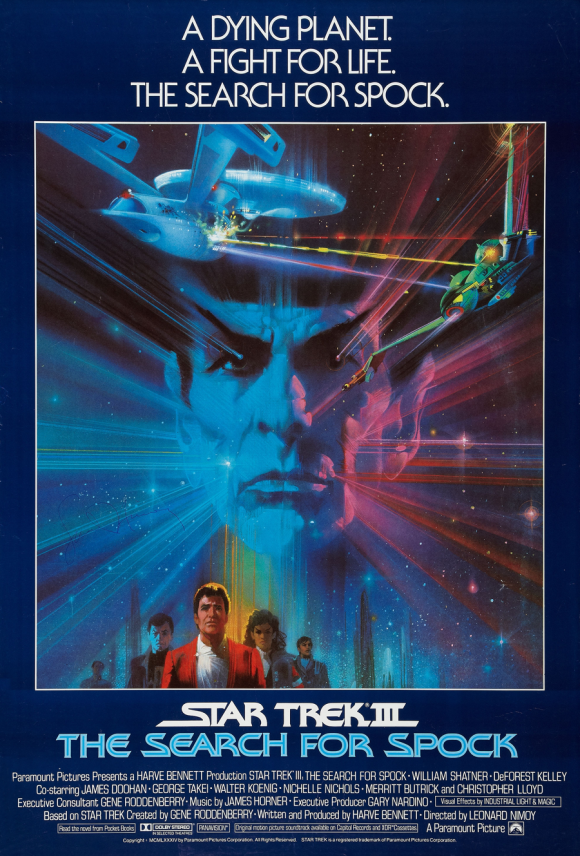 Coming between the twin successes of Star Trek: The Wrath of Khan and Star Trek: The Voyage Home, Star Trek III: The Search for Spock has earned a reputation as a lesser film, one that’s…pretty good, but doesn’t compare to what came before and what would come after. I have always bristled at that, because I find The Search for Spock to be a crackerjack adventure, full of great moments, exciting adventure and, unlike a lot of sequels, actually changes the status quo for our characters, pushing them (and the diehard Trek audience) into new scenarios, forcing them to change and evolve.

Unlike The Wrath of Khan, whose budgetary limitations kept the film to being essentially a two-hander, Search for Spock fully immerses itself in the world of Star Trek. We are introduced to the Excelsior, a new ship that supposedly outclasses the Enterprise in every way. We meet dozens of new Starfleet officers, one of whom, Admiral Morrow (Robert Hooks) finds himself in the unenviable position of having to say “no” to James T. Kirk. David Marcus (Merritt Butrick) and Saavik (Robin Curtis, replacing Kirstie Alley) are now assigned to the USS Grissom, studying the new world created in the wake of the battle with Khan. We’re even treated to a return appearance of Spock’s father, Sarek, who shows up like the Grim Reaper at Kirk’s door, demanding to know why his son’s body was not returned to Vulcan.

It is this scene that kicks the whole story into gear, as Kirk decides he owes it to his best friend to accept “Vulcan mysticism” on faith and see if Spock’s “Katra”, now seemingly residing in an addled Dr. McCoy, can be returned to his body. The entire plan—and the bridge crew’s involvement in it—is left off screen, leading to a lively set of scenes where Kirk and crew are a few steps ahead of the Federation—and the audience—while they steal the Enterprise. The lighthearted “caper” aspect of these scenes will end up being a stark contrast to what is to come. 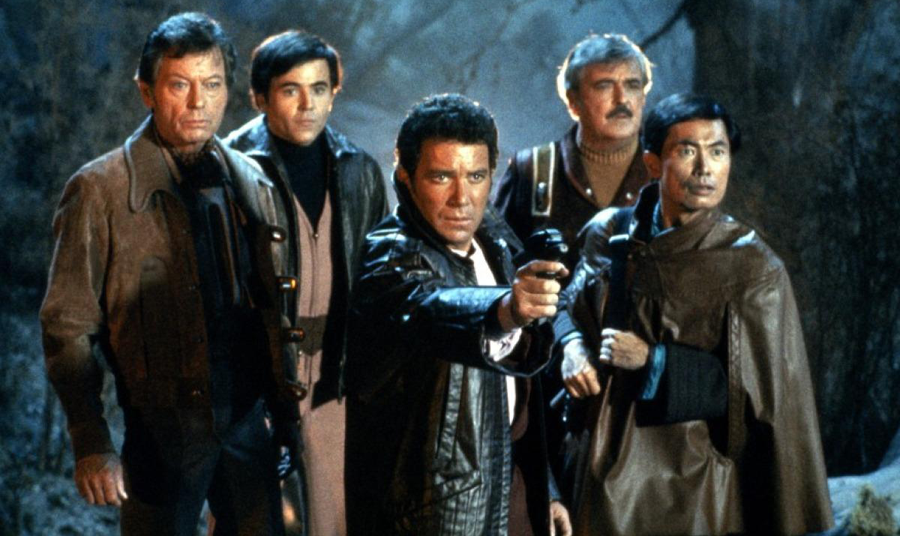 Like a group of moths attracted to a flame, everything comes to a head at the Genesis Planet. David and Saavik learn that the whole planet is dangerously unstable, thanks to David cutting some corners during its creation (Pro Tip: Don’t use Proto-Matter). Commander Kruge arrives just in time to kidnap them both, alongside a resurrected and now-teenage Spock. When confronted by the Enterprise, Kirk and Kruge engage in a game of cat-and-mouse, each trying to out think the other. Kruge then ups the ante by having one of his goons murder David on the surface of the Genesis Planet, leading to what in my opinion is William Shatner’s finest moment as Kirk.

Upon learning his son is dead, Kirk retreats to the safety of his captain’s chair. Instead, he misjudges and trips, falling to the bridge floor. After a cutaway to Kruge, we return to Kirk, who has turned his back on the view screen (and us), lost in utter despair. The rest of the crew stares at him in pity, as do we. Eventually Kirk collects himself, finding a way to defeat Kruge and his men. He does this by pulling off a Kobayashi Maru-style move, blowing up the Enterprise with most of the Klingons aboard. In just a few moments, this initially light-hearted adventure story has dealt our hero two titanic blows: the loss of his son, and the Enterprise.

Frustrated that there was no chance to stage a Kirk vs. Khan (what’s with all these K characters?) mano-a-mano scene in the previous film, the filmmakers made sure that Search for Spock featured a good old-fashioned fistfight. Kirk and Kruge face off on a Genesis Planet that resembles something from Dante’s Inferno, leading to the latter getting kicked in the face so hard he plunges into a river of lava. Good riddance.

The crew—now commanding a Klingon Bird of Prey—find their way to Vulcan, where a mystical ceremony leads to the return of the Spock they know and love. It’s here where we get our first glimpse of our director in his pointed ears, and when he raises a familiar eyebrow, it’s a cause for celebration. Spock is back, all is well—except it’s not. David is dead, the Genesis Planet has exploded, the Enterprise is no more, and our heroes are now outlaws. What’s next? 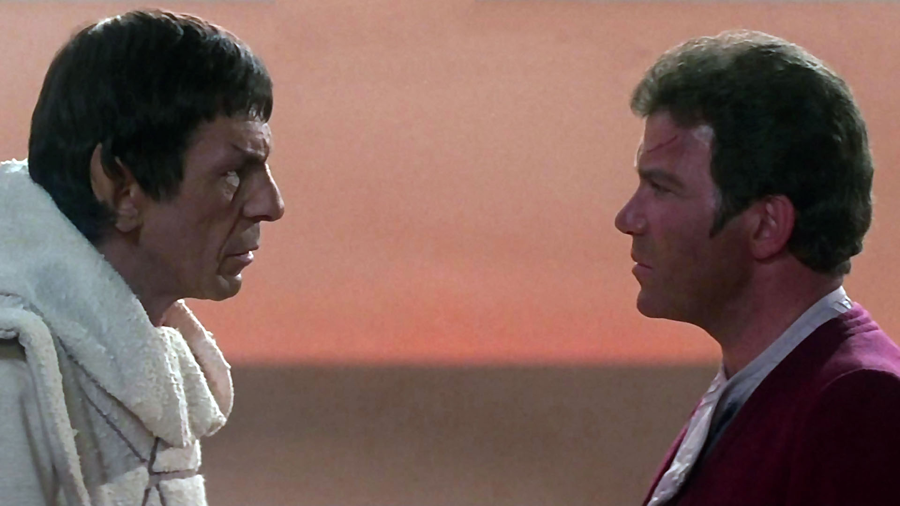 Even though Leonard Nimoy had spent 20-plus years in the world of Trek, there were no guarantees he would know how to direct a major motion picture, especially one at this scale and with so many devoted fans. Freed from having to act in the picture (until the very end), he showed a keen understanding of what made a good Star Trek story, knowing to give our characters important, human-scale beats to play.

As I mentioned above, I truly think Kirk’s reaction to learning about David’s murder is the character’s finest celluloid moment. We seem him vulnerable as never before, but he still manages to pull it all together when the chips are down. McCoy’s reveal of just how he feels about Spock is touching, and Scotty, Sulu, Chekhov and Uhura all get some really great business (I chuckle every time I hear Nichelle Nichols say, “Step into my parlor, gentlemen” when her fellow lawbreakers arrive, looking to be transported onto the Enterprise). Christopher Lloyd, normally so gentle and eccentric on screen, is wonderfully despicable as Kruge, yet also very funny. When alerted Kirk wants to discuss a cease fire, a lot of actors would just let the Klingon make-up do the acting and read Kruge’s retort as you might expect. Instead, Kruge tells his underling to “Put him on screen,” his voice dripping with sarcasm and surprise. It’s a genuinely laugh-out-loud moment.

Star Trek III: The Search for Spock was a big success, critically and financially, proving that Wrath of Khan was no fluke. After a failed cinematic launch, it became obvious that the Star Trek franchise was in good hands. Now all that was left to do was make a really good Star Trek IV.

Rob Kelly is a writer/artist/comics and film historian. He is the co-host of The Fire and Water Podcast (and the host of its sister show, The Film and Water Podcast), the co-creator and writer of the award-winning webcomic Ace Kilroy, and the creator of the book Hey Kids, Comics!: True-Life Tales From the Spinner Rack. He still has his Mego Gorn doll.