YELLOW SUBMARINE: The Voyage From Screen to Page

RINGO AT 81: A look at a beautiful adaptation of a classic work… 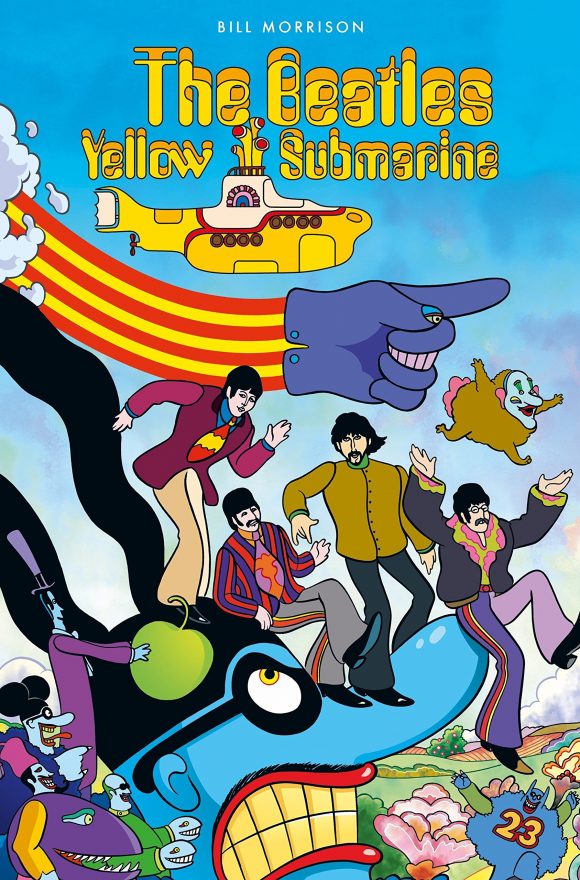 Well, to celebrate, we’ve got a bit of an offbeat treat for you: Back in October 2018, I sat down with cartoonist Bill Morrison to discuss his beautiful adaptation of the Beatles’ classic film Yellow Submarine for Titan Comics.

For reasons that are entirely my own fault, I wasn’t able to run the interview right away, so I saved it for a special occasion. Since the movie’s eponymous song is Ringo’s best-known vocal work, his birthday would seem to fit the bill.

Now, some background about the project itself. Morrison, formerly with Bongo Comics and Mad, began a Yellow Submarine adaptation in the late ’90s for a different publisher but it died on the vine.

“I think it was going to be a 48-page comic,” Morrison told me. “And for whatever reason, the project was shelved. But I got about 25 pages done plus a cover, and I began showing those around to friends and posted on Comic Art Fans and it was just kind of a curiosity — this Beatle project that never came to fruition.”

Fast forward a couple of decades and the project was revived with UK-based Titan, which released the hardcover in time for the movie’s 50th anniversary last year. 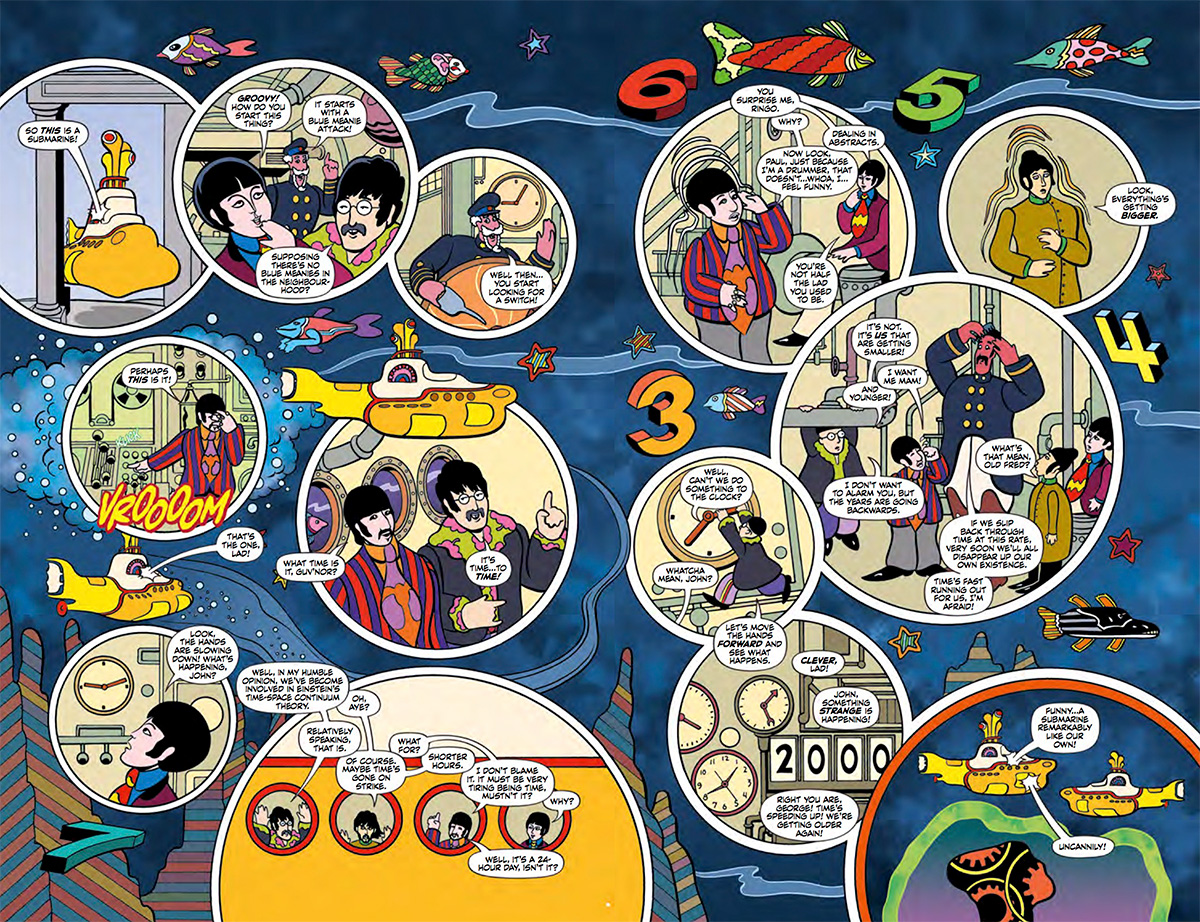 “They said we’d love you to finish this thing you started 20 years ago,” Morrison said. “And (they) wanted it to be a substantial book so they made it 96 pages and a hardcover. It was really a dream come true to just be able to finish that.”

So pop in your songtrack, sit back, and see what other secrets Morrison revealed in our talk:

Dan Greenfield: Did you work off of a transcript of the movie or did you work on an original script?

Bill Morrison: Well, initially my wife and I had two VHS copies of the film that were struck from a laser disc that was owned by (cartoonist) Scott Shaw. This was before the DVD even came out and I don’t know if there was a VHS version out at the time, and so we were both working on different VCRs, like me in one room and her in another room, and writing down dialogue, like listening, rewinding, writing down. She would call me into her office and say alright, I’ve listened to this line from Ringo 20 times and I cannot understand what he’s saying. 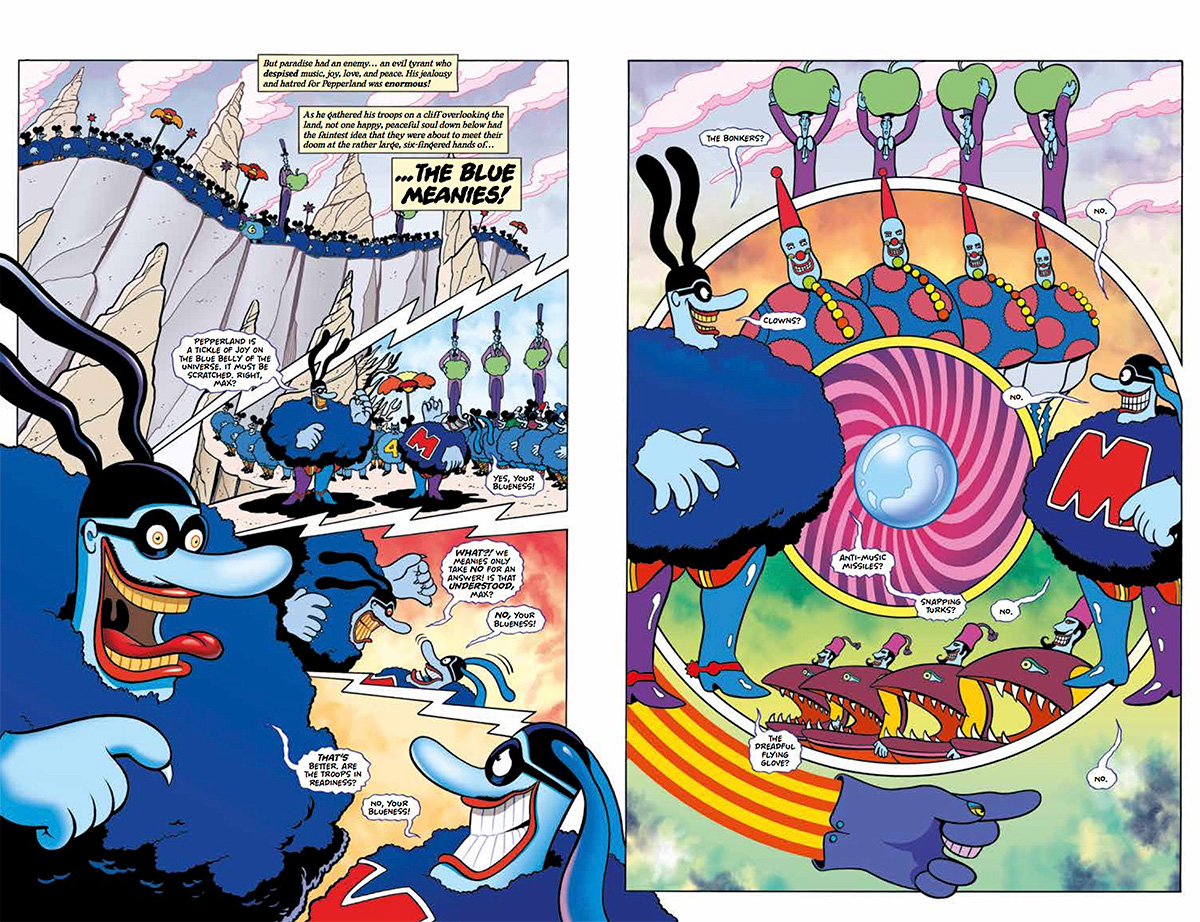 Dan: Yeah there’s a lot of under-the-breath things said in the movie. Even now I pick up new things I’ve never heard before.

Bill: Yeah, we just went through the film and jotted down every line of dialogue, up to a point and then when the project was shelved we stopped. Now all these years later with Titan involved, I was able to enlist the resources that they have. They said, “Yeah we’ll just have somebody go through the film and just transcribe everything.” So they delivered me a full dialogue script that didn’t have any stage direction or anything like that. And even that, they heard it one way and I would read it and say, well that’s not how I’ve ever heard it, and I’d go back to the film— and now I’ve got a nice DVD copy, so the sound’s better and I can actually hear the dialogue much better.

So, I think we got it pretty close, and most of the dialogue is from the film, but this being a graphic novel version, there’s some things that, without the aid of the music and the animation, I had to create little bits of dialogue and narration and caption boxes to just keep the story moving.

Dan: How did you decide to handle the musical numbers themselves? Because they’re so indelible to the scenes of the movie. What was your thinking process about how you wanted to handle that?

Bill: Well, a few of the musical numbers were fairly easy to just avoid. We didn’t have the rights to the lyrics, so we couldn’t have a scene just covered by the lyrics from the songs. So, things like, Eleanor Rigby and Lucy in the Sky with Diamonds — those are just kind of music videos that don’t have anything to do really with the story, so I was able to just ignore those. As much as it killed me ’cause visually they’re just so great.

But then there were other things like, All You Need Is Love, and the stuff that’s more towards the end where the music sort of plays into the Beatles dressed as Sgt. Pepper’s band defeating the Blue Meanies. There’s a couple of songs in there that are very important so I covered those with mainly narration. But I have some montages and two big spreads that sort of cover what’s happening with the Beatles using music to defeat the Meanies and let narration explain what’s happening. 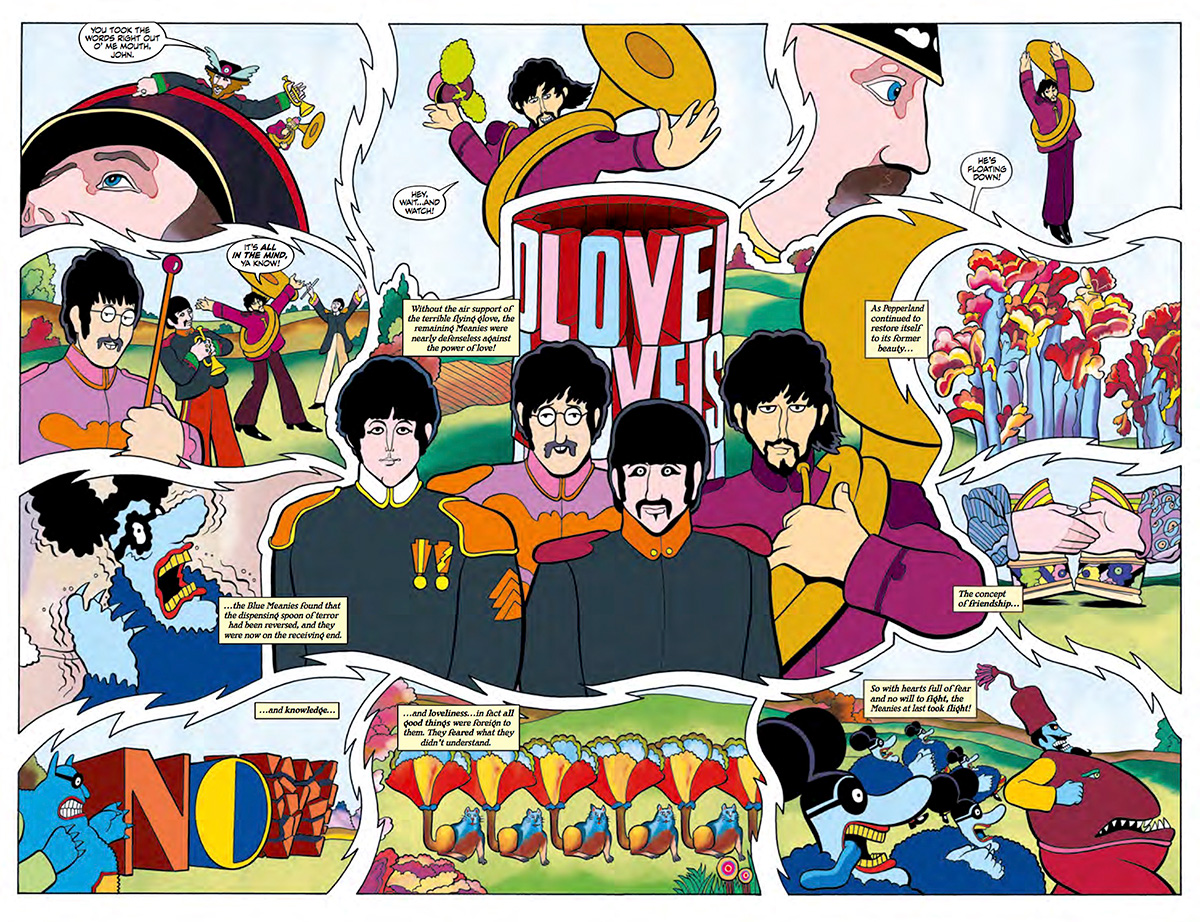 Dan: Was it a concerted effort to go with the original version of the movie, as opposed to the later one with Hey Bulldog?

Bill: I’m really hoping that we might be able to do an expanded version and put the Hey Bulldog scene back in. And that would kind of mimic the film, wouldn’t it?

Dan: Did you go back and look at the original Gold Key adaptation from the ’60s?

Bill: I did initially, and there wasn’t a whole lot I could… I remember in the early days like 20 years ago, I was scrounging for where I could get it. I picked up a couple of books that came out, there was a, like a big hardcover storybook and there was a little paperback. 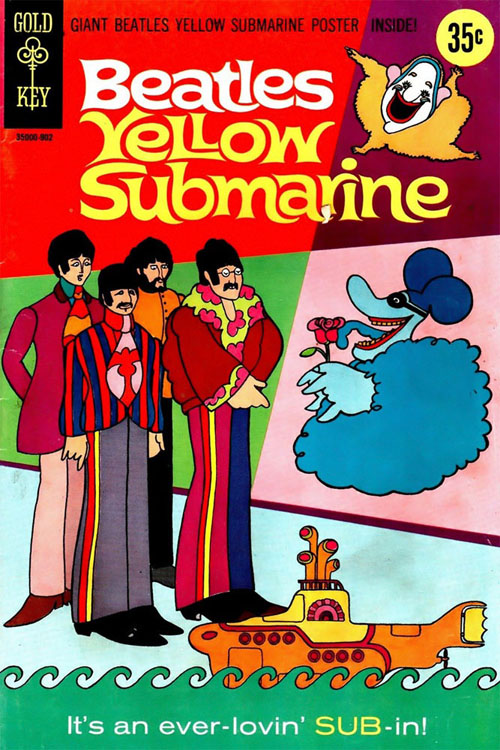 Dan: Wasn’t there one with just cutouts or something?

Bill: I wasn’t able to lay my hands on that one.

I remember I looked at the comic, Jose Delbo did a great job, but he was working from an early pre-final script, and whatever stills they could send him, so he was kind of working in the dark. He didn’t have a firm idea of what this film was going to end up being ’cause it was still in production when they were working on it. So yeah, there wasn’t a lot I could get out of that, because it veered from the story so much. But yeah, I looked at everything.

Dan: Did you listen to the music while working on this?

Bill: I had the music playing a lot. I had also just gotten, I have the Sirius radio in my car, and they had just gotten The Beatles Channel. So, every day … I’m listening to Beatles music and listening to it on my way home, and it’s really inspirational. It sort of gets you psyched up, cause you start thinking, “God, the Beatles were so great, and I’m doing this thing that’s an official part of Beatles history.” 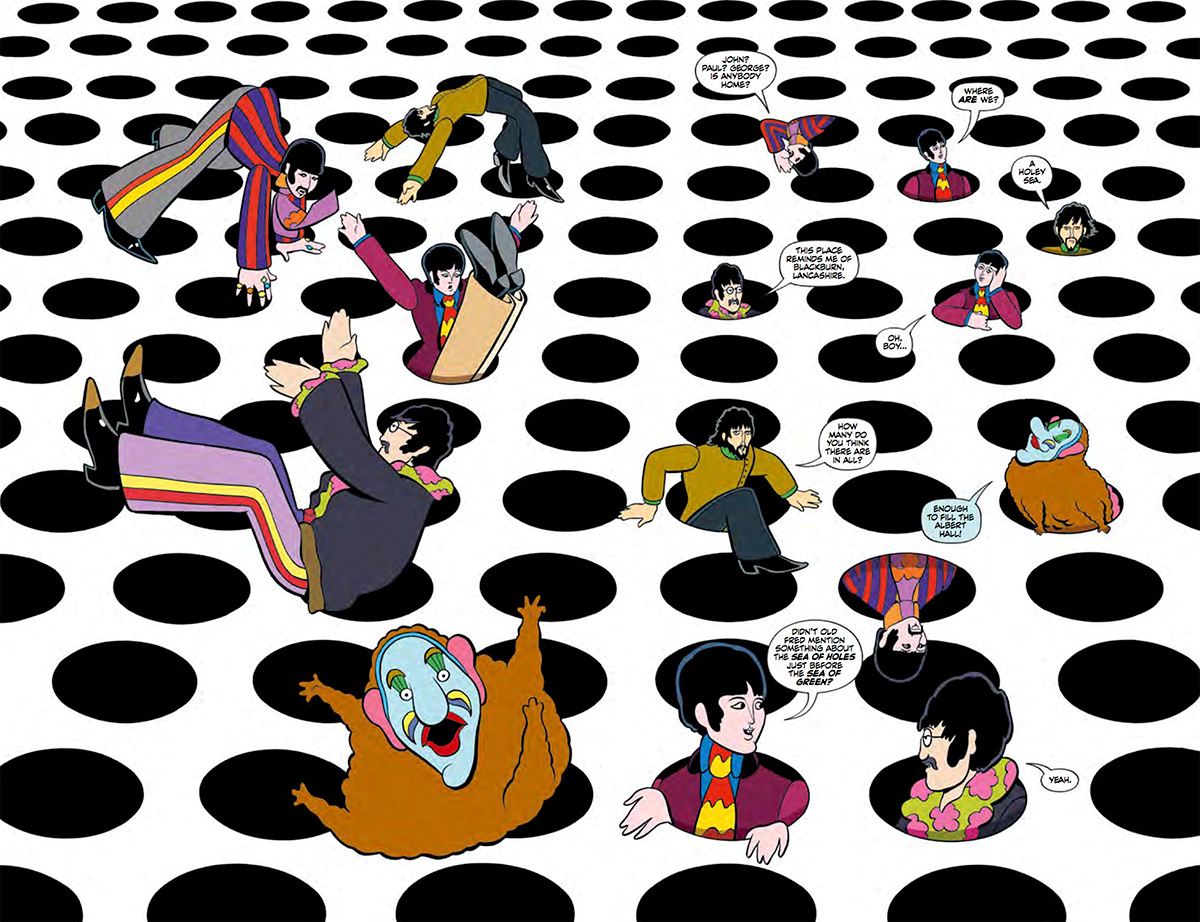 Dan: Have you heard from anybody on Team Beatles?

Bill: Paul hasn’t called me yet, neither has Ringo, but they’re touring so I know they’re busy. I did hear from Dhani Harrison, George’s son, and he loves it. He’s a big comics fan, so to him it was a natural thing. I don’t remember exactly what he said but he was very complimentary; he said he likes the way I handled his dad.

Bill: Well, I really tried to please myself as a Beatles fan and as a fan of the film. I made a decision early on: A lot of people ask me, “What did you bring to the project?” Like, “Is your style evident?” And I really tried early on to just bury whatever style I have of my own and make it very faithful to the film. 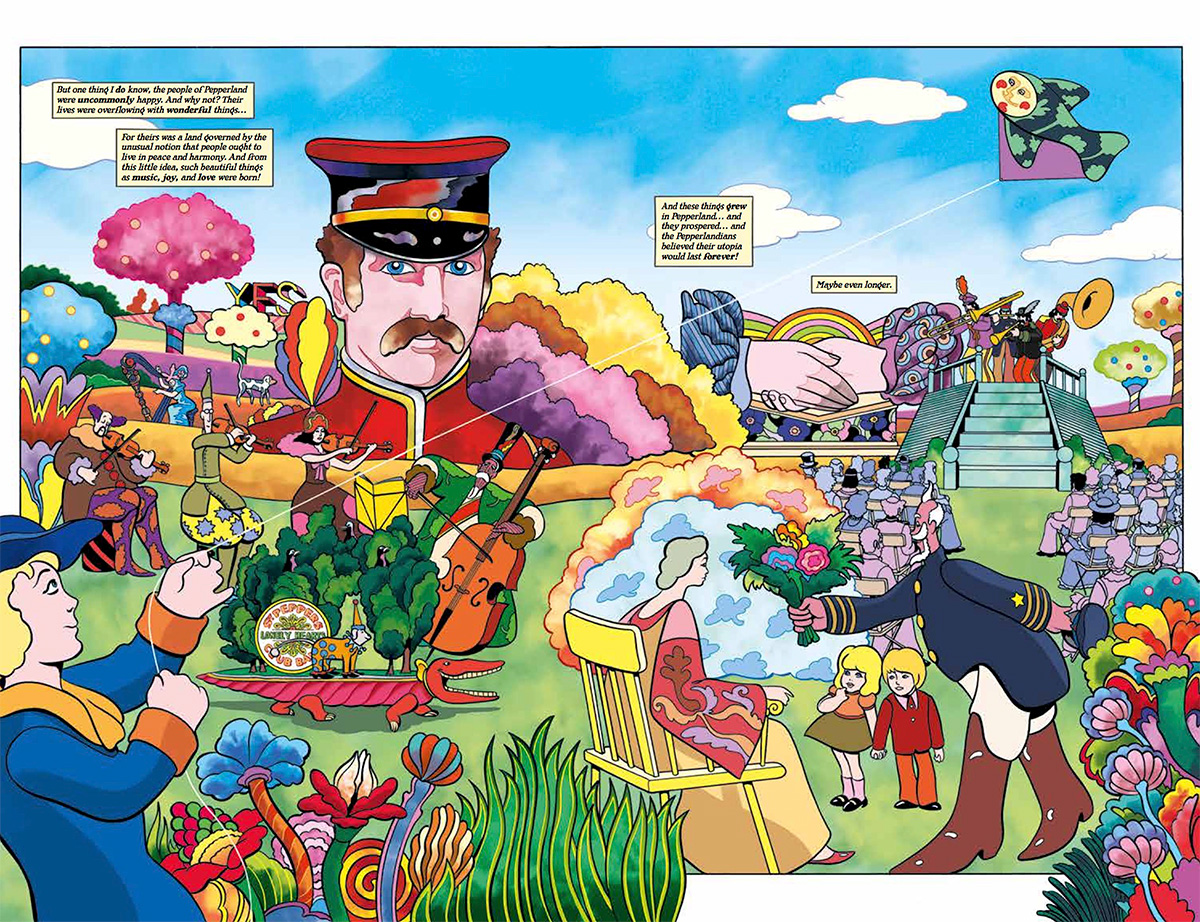 I wanted Beatles fans and Yellow Submarine fans to relate to it, to see it as authentic. Like, nobody cares how Bill Morrison draws the Yellow Submarine characters. Nobody cares about that. What they care about is the film, and having a graphic representation of that.

So, I really just kept that in my head the whole time, (saying to myself): “As a Beatles fan, is this something that’s going to please you? And if it pleases you then it should land with most Beatles fans around the world.”

— How THE BEATLES Made Me an Even Bigger Comics Fan. Click here.

This interview was edited and condensed for clarity.