In the grand tradition of radio countdowns, we bring you the Top 13 Beatles Moments in Comics History, running all through BEATLES WEEK! Beatles comics here, there and everywhere! Today, we have #7-#5!

“Any Time at All”

7. Chronos, DC, 1998. Time travel is one of comics’ most popular tropes. Some characters wouldn’t even be around if it weren’t for time travel! (I’m lookin’ at you, Cable.) There’s nothing better to show the setting of a time travel adventure than staging it at a pivotal event in history, not only pinpointing the era but allowing the comic books’ characters to interact with historical figures. The short-lived but inventive DC comic Chronos played with time travel throughout its run, and kicked off the series’ #1 issue with the birth of the Beatles… 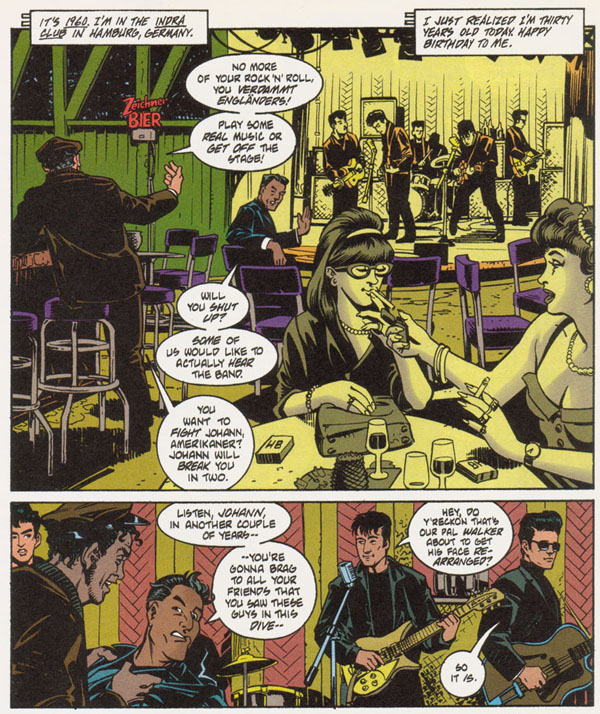 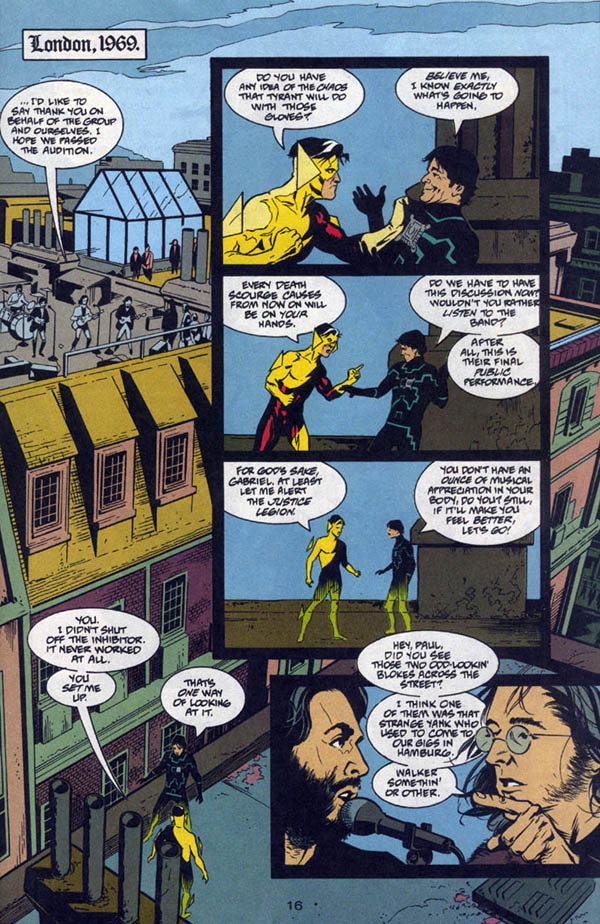 “So Captain Marvel zapped him right between the eyes”

6. Marvel Super Special #4, 1978. In 1978, Marvel devoted an issue of Marvel Super Special (which premiered the previous year with a comic starring Kiss) to “The Beatles Story.” No ordinary four-color Marvel, this magazine-size, glossy-stock comic came clothed in a psychedelic, fluorescent wrap-around cover: an eye-catching illustrated montage of the Beatles’ full careers. 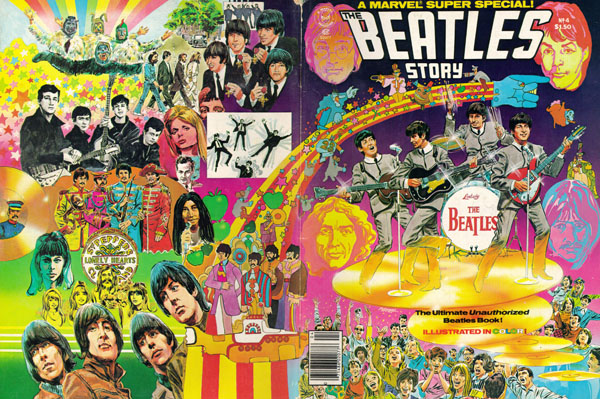 The quite lovely interior artwork is a world away from Marvel’s pumped-up, muscled superheroes, highlighted by skilled illustration that captures the looks and movement of real-life people without looking like a caricature. 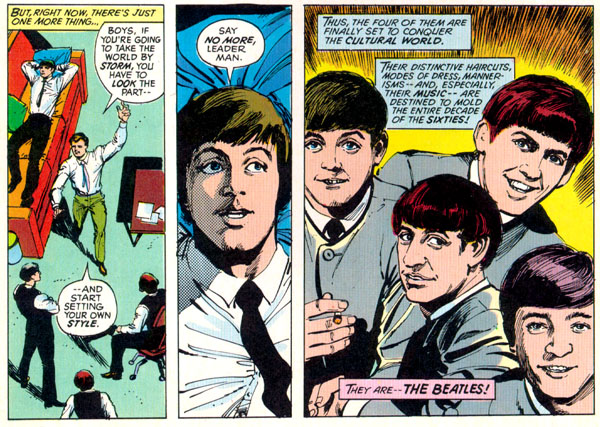 The narrative follows the Beatles’ careers through their break-up and 1970s solo projects. Although it skims the surface of their stories and offers nothing new to the saga, I think it’s one of the lovelier and more skillful of the many Beatles biography comics, and it’s a pity it’s never been reprinted in trade format. 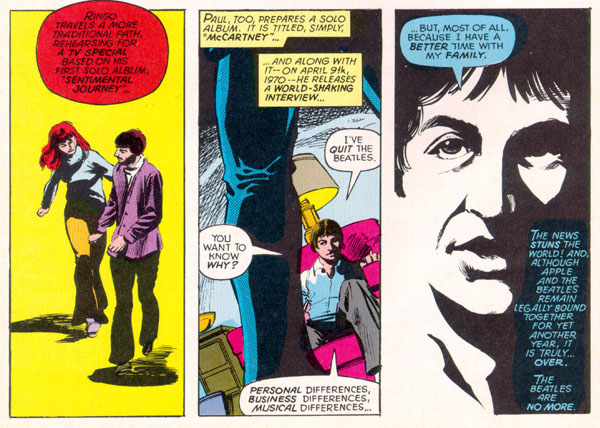 Curiously, Marvel also planned another Beatles-related project for the Marvel Super Special series: an adaptation of the infamous motion picture dud “Sgt. Pepper’s Lonely Hearts Club Band,” starring the Bee Gees and Peter Frampton. The magazine was announced but never published in the U.S. Artist George Pérez has said the book met with approval delays and cooperation problems from the production company, and by the time the comic was ready to be released, the film had already bombed at the box office. It was published the next year in Europe, in Dutch and French translations. Collectors regard it as the single rarest Beatles comic — but that’s a reflection of its scarcity, not its contribution to the Beatles canon. 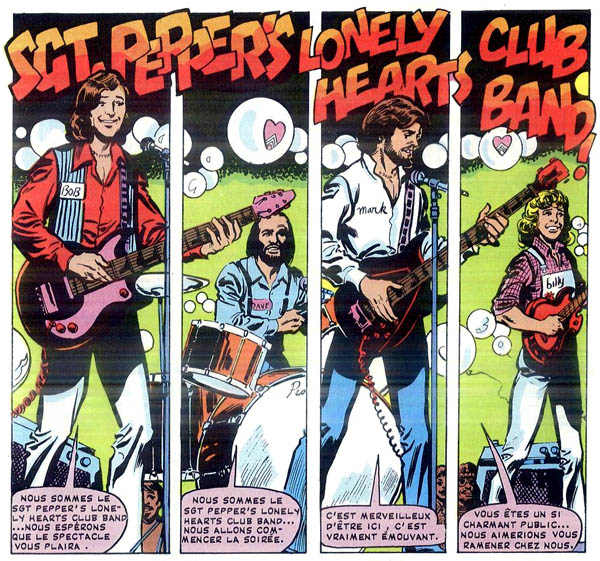 “He got hair down to his knees”

5. Jimmy Olsen #79, DC, 1964. 1950s Superman titles under the editorship of Mort Weisinger followed an oddball but admittedly successful formula: Superman or one of his friends in an outlandish situation. It was a sure attention-getter, a hook to the reader who wanted, no, needed to find out how Superman got a lion’s head, how Lois could be a witch, or how Jimmy Olsen was a Nazi officer (yes, an actual story). Whatever the crazy events, the characters would be reset back to the status quo at story’s end, so each could be crazier than the last.

Which only kinda-sorta-maybe explains the incredible over-the-top sheer freakitude of “The Red-Headed Beatle of 1,000 B.C.!”. 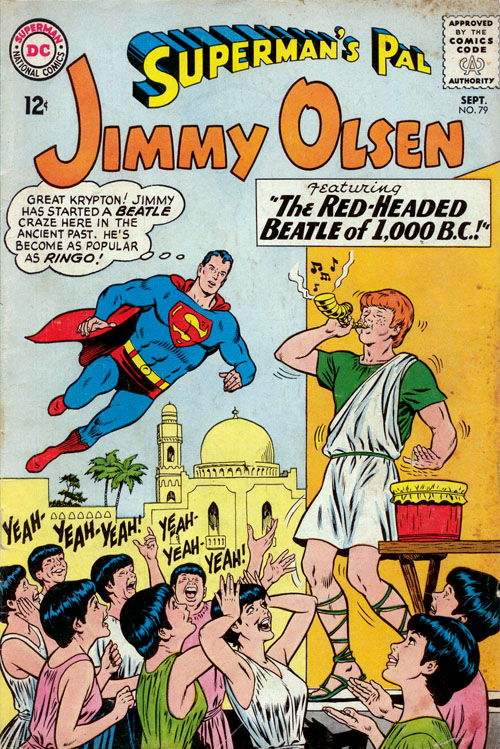 In an attempt to sum up this tale of antediluvian Beatlemania succinctly and yet fairly, I’ll hit the high spots. Jimmy Olsen, a diehard Beatles fan… 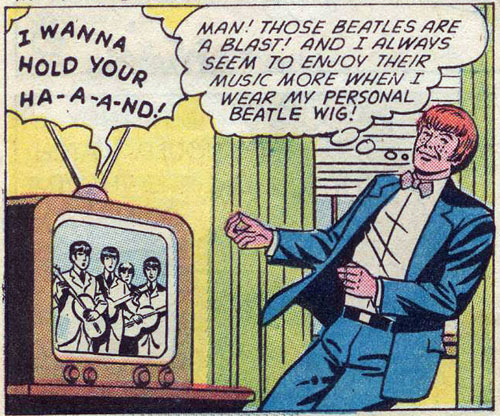 … is transported 3,000 years into the past, to become a vendor of Beatles moptop wigs …

… which save legendary strongman Samson from losing his power to a scissor-wielding enemy. 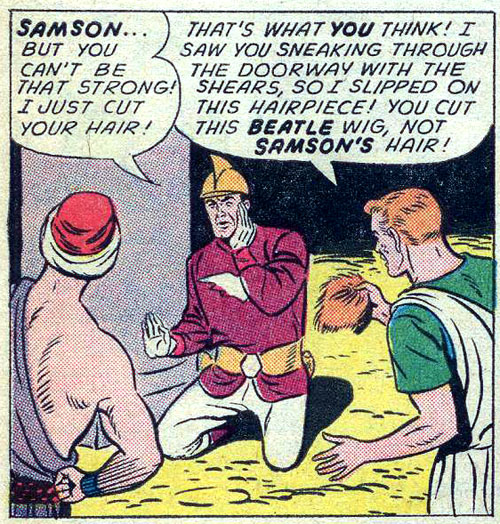 Yes, folks, the Silver Age was pretty much like this, every month.

What will be in the Top Fab Four? Click here and here to find out!