In the grand tradition of radio countdowns, we bring you the Top 13 Beatles Moments in Comics History, running all through BEATLES WEEK! Today, we have  the toppermost of the poppermost !

“Do You Want to Know a Secret” 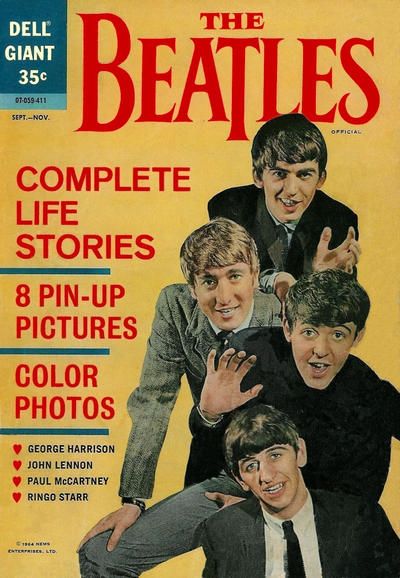 1. The Beatles one-shot, Dell, 1964. Straight out of the gate with the first rush of Beatlemania came the authorized Dell Giant comic The Beatles, released in July 1964. Considering the many months’ lead time a comic takes to write and illustrate before publication, the project must have been under way fairly quickly after the February Ed Sullivan appearance. It’s a project that suggests an uncanny prescience on the part of Dell in anticipating the demand for all things Beatles.

But it wasn’t the blockbuster Dell had anticipated. With 72 pages of comics and pin-ups, it sold for 35¢, nearly three times the cost of a regular Dell comic. So much Beatles merchandise was released in the early years of their fandom, and this relatively expensive comic reportedly sold much more poorly than expected, even given the skilled illustrator involved. Joe Sinnott’s artwork is often effectively dynamic in portraying the band in action, but his Beatles portraits can veer into caricature.

In tone, the comic was not much different than the myriad of Beatles fan magazines of the time. Aside from putting the life story into comics form, there was little new here for a die-hard Beatles fan, and much space is taken up with tidbits and trivia. 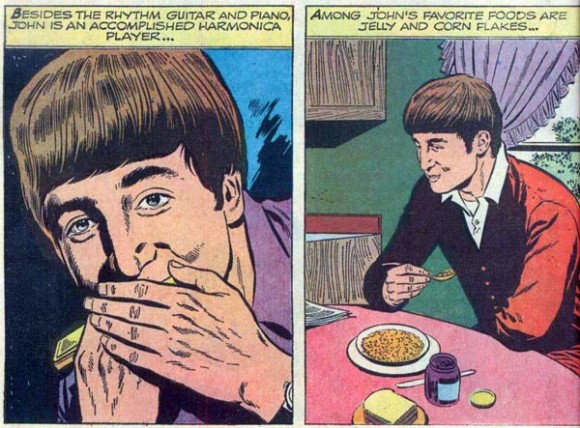 In those pre-direct market days before dedicated comics shops, newsstands vendors would rip the top of the front cover from unsold magazines and comics to return to their distributor for credit. The rest of the comic would be destroyed — so relatively few of the original print run of this book has survived. That’s made this first Beatles comic one of the most valuable today as a collector’s item for both comics and Fab Four fans.

We started with the most modern  – “The Fifth Beatle” – and wrap up on a piece of history.

So here’s a fitting finish, from John the Skrull:

All you need is love … and all we want are your comments! Leave them below!