In the grand tradition of radio countdowns, we bring you the Top 13 Beatles Moments in Comics History, running all through BEATLES WEEK! Today, we have 4, 3, 2 … !

“She was just seventeen, you know what I mean”

4. Teen Titans, DC. Possibly a more apt DC Universe comparison to the Beatles, at least in intended “youth appeal,” was the first generation of the Teen Titans. A running gag in the original series focused on the Titans’ bulletin board, filled with notes, memos (“Kid Flash: Don’t be late for next meeting!” “Aqualad: Stop tracking water into the lair!”) and fan mail. The Beatles, like LBJ, obligingly drew their own portraits on their fan letter, although the portrayal was quite a bit out of date. By the time this story was published, the Beatles had abandoned their mop-topped, jacket-and-tie look for the more mod, colorful, outrageous outfits of their Sgt. Pepper era. It’s a relatively mild but still telling example of how out-of-touch comics creators could be with youth culture, despite their attempts to create characters that looked and sounded hip.

Almost conversely, a spoof of “A Hard Day’s Night” in Teen Titans Go!, the comic based on the animated series’ continuity, might have completely passed over the heads of the target audience of younger readers, but delighted this older Titans and Beatles fan. It’s a gentle and fond parody that puts the TV Titans in the shoes of the movie Beatles. 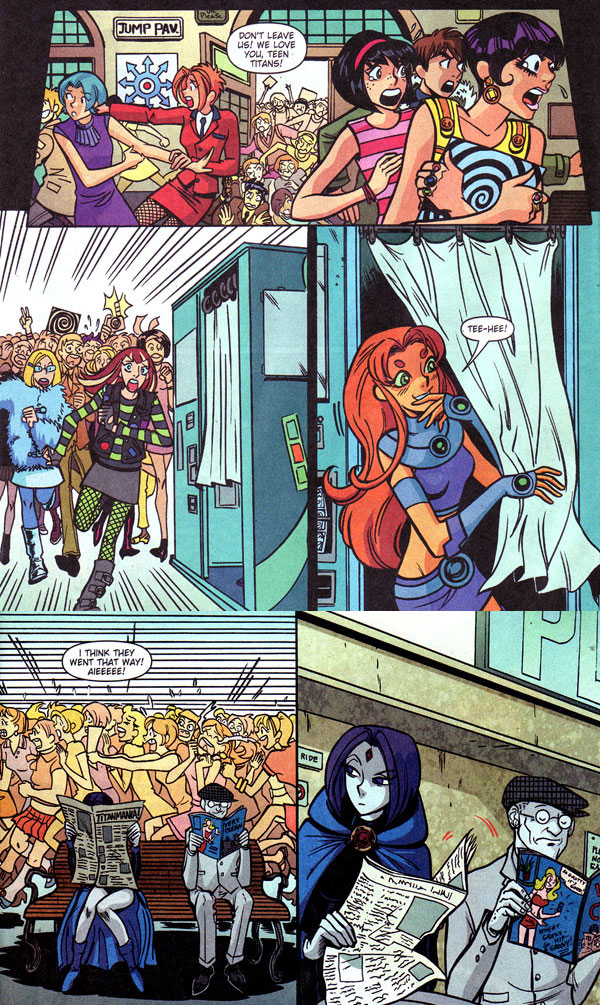 And then there’s Tiny Titans: Let’s face it, a Titans team that includes the superhero Blue Beetle is ripe for a silly pun and a Fab Four cameo. 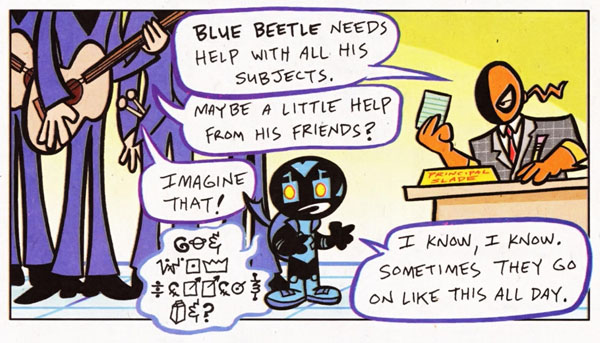 But if you think that’s the silliest the DC Universe would get with the Beatles … hoo boy, have I got a story for you.

“Standing on the cast iron shore”

3. Metal Men #12, DC, 1965. The Beatles became international celebrities, the epitome of fame and the touchstone for defining success in the ’60s. So here’s DC’s robotic Metal Men, being besieged by a flock of eager, adoring fans screaming from the gallery … including the Beatles themselves! Okay, I’ll buy that in the DC Universe Batman might bring out a slew of admirers, but Gold, Platinum and company are B-listers at best (sorry, Metal Men fans!). John Lennon controversially once stated that the Beatles were “more popular than Jesus.” He should have played it safe and said they were more popular than the Metal Men.

“Flew in from Miami Beach, BOAC”

2. Batman ‘66 #10 (digital edition), DC, 2013. A much more recent comic, DC’s revival of the Batman TV show continuity in Batman ’66, gently spoofs the fact that the Beatles weren’t the only ’60s entertainment craze. Like the crowds of Beatlemaniacs who gathered at JFK Airport in ’64 to welcome the Fab Four to America, here’s a vocal assemblage of Batman fans cheering the arrival in London of Batman and Robin (and, hopefully not spotted by the crowds, Bruce Wayne’s faithful retainer, Alfred). Relatively unnoticed, ahead of the Caped Crusaders on the gangway, are the Beatles: They, too, caught the early plane back to London. 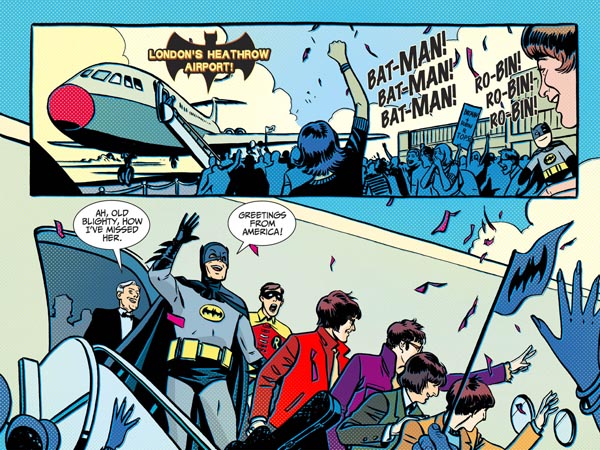 Tomorrow: 1. And we don’t mean the hits album.