In the grand tradition of radio countdowns, we bring you the Top 13 Beatles Moments in Comics History, running all through BEATLES WEEK! Yesterday, all my troubles seemed so far away, and we gave you #13-#11. Today, we have #10-#8!

10. Fantastic Four and Strange Tales, Marvel, 1965. In the 1960s, Marvel Comics was the younger, hipper comic book company next to the old-fashioned DC. Marvel’s attempts at referencing youth culture sometimes felt flat, but even Stan Lee and Jack Kirby weren’t above mixing their superhero Fab Four with the Fantastic Four from Liverpool — wait a minute, strike that, reverse it! — when Ben Grimm gets a shaggy Beatle wig:

Marvel would never let a cultural reference go by without trying to make it into continuity, and the Thing and the Human Torch don Beatles wigs (Johnny’s must be made of non-flammable unstable molecules!) a couple months later.

How could you resist that bombastic come-on in the Mighty Marvel Manner? It’s a deceptive title, though. The only ones who Meet the Beatles — sort of — are Ben and Johnny’s girlfriends, Alicia Masters and Dorrie Evans.

The hapless Torch and Thing, off chasing thieves disguised as the Fab Four, don’t even get a chance to brush up against their idols, arriving just as the show ends.

Luckily for Ben and Johnny, though, Marvel history eventually rights this injustice when, in a modern retelling of Reed and Sue’s all-star, cameo-packed wedding from Fantastic Four Annual #3, a quartet of familiar faces are inserted into the ceremonies alongside the leading lights of the Marvel U. 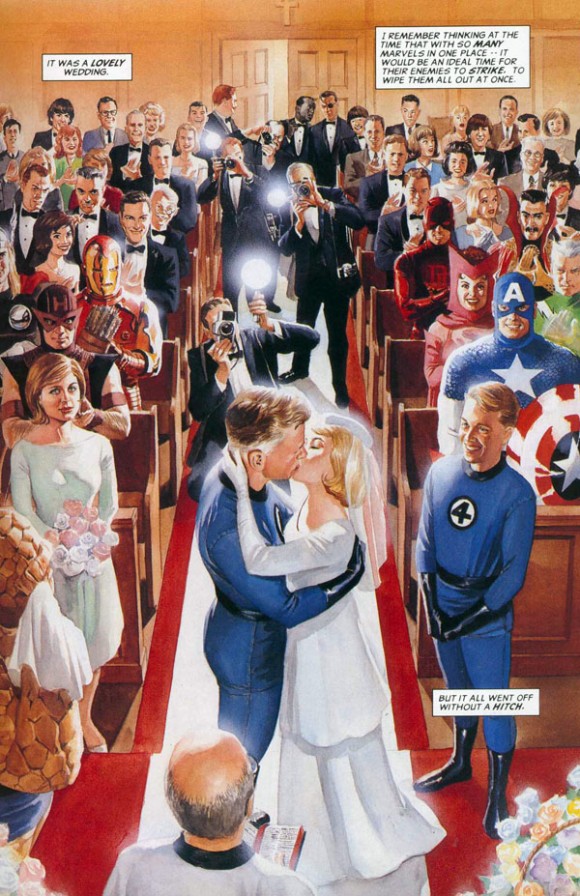 Still, you’ve got to wonder what the Beatles did to warrant being seated all separately from each other? I like to think it was usher Ben’s subtle revenge for having missed them months before. Look, even “The Dick Van Dyke Show”’s Rob and Laura Petrie (below, lower left) got better seats than they did!

“You know I can’t sleep, I can’t stop my brain”

9. Animaniacs #12, DC, 1996. That tradition of cartoons and comics created for kids but with a lot for the adults to enjoy, is embodied in the ’90s with Animaniacs, which built on the frenzied energy of the Warner Brothers Looney Tune cartoons and their frequent tips of the hat to pop culture and celebrity. With a clever, knowing wink, Animaniacs featured parodies and “guest appearances” by characters from throughout history. Here’s the world-conqueror wanna-be super-genius mouse the Brain and his dimwitted assistant Pinky meeting a familiar quartet: 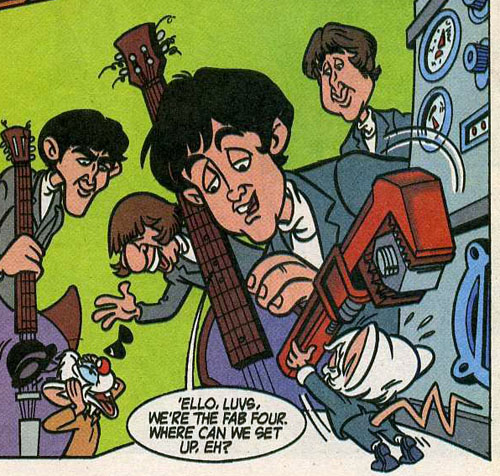 This Pinky and the Brain story is filled with more Beatles references than the Albert Hall has holes! 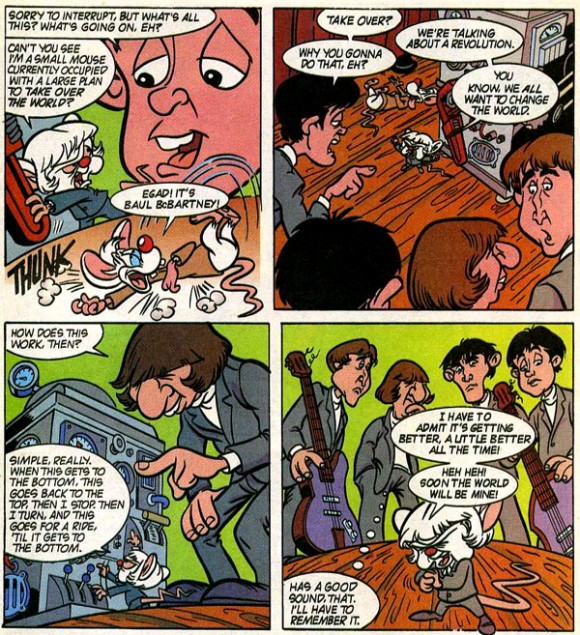 “They’re gonna make a big star out of me”

8. Herbie #5, American Comics Group, 1964. Herbie (last name Popnecker, not to be confused with the Volkswagen bug) was one of the great humor comic book characters of the 1960s. This corpulent little kid was a giant in his world, known and loved by presidents, kings and queens, and celebrities. If there was anyone who could lay a claim to being bigger than the Beatles, it was Herbie. Quite a bit bigger, in every way. 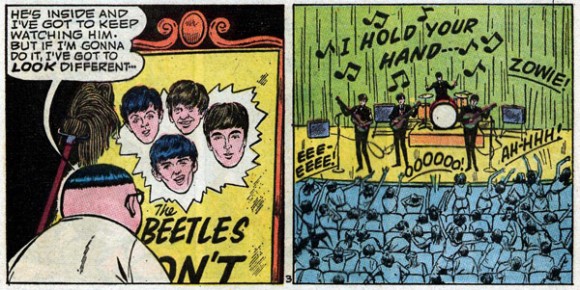 Even when replacing Ringo and donning a literal moptop, Herbie drove his fans wild. Forget James Bond and Doctor Zhivago: Herbie, the fat little kid who could save the world, was the ultimate love symbol of the 1960s. 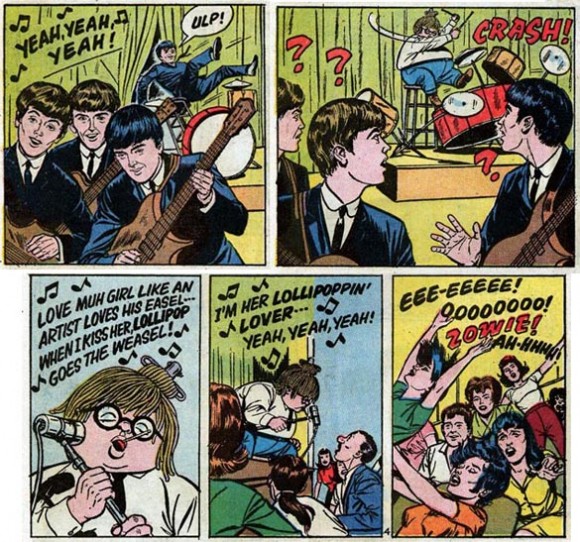 Tomorrow Never Knows what the countdown will bring, uh, tomorrow … other than #7-5!